Justin Choate put on a Phillies hat and walked into Citizens Bank Park alone last week. The Lehigh Valley IronPigs were on the road. So, Choate had a free night. He bought one ticket in the first row of Section 214. He loves that Cameron, his 4-year-old son, has an interest in baseball. They always watch games together.

The game turned sloppy in the fourth inning. The Phillies were losing to Atlanta. A double, a single, then a throwing error on a stolen base. It was humid. People groaned.

Choate is the public address announcer at Coca-Cola Park in Allentown for the organization’s Triple-A affiliate. It’s his job to hear things at the ballpark others do not. But this was unmistakable. For the first time in his life, Choate was sitting in the stands at a home Phillies game and Dan Baker’s voice did not fill the ballpark. Baker was absent due to health issues.

There is something oddly specific about wanting to be a PA announcer. The jobs, for most, are seasonal side gigs. But Baker has done it for 50 years with his pronounced style. Multiple generations of Phillies fans have formative memories narrated in Baker’s cadence. Choate’s parents had a Sunday ticket plan at Veterans Stadium when he was a kid growing up in Delaware County. They sat in right field.

“And my favorite player was Bobby Abreu,” Choate said. “We sat right behind Bobby Abreu. It’s just the feeling that I got when I heard ‘Bobby ahh-BRAY-ooo’ from Dan Baker. It was just unbelievable to me. And that was like, ‘That’s what I want to do.’ I want to be able to put that feeling to somebody else. And I wasn’t thinking that at the time. But as I’ve gotten older, that’s kind of what I’ve realized.”

When Choate was 18 and headed for college, he wrote his idol a letter. He expected it to go into a pile somewhere. “I picked up the phone,” Choate said, “and it was just that, ‘Hello Justin, this is Dan Baker.’ My jaw dropped.” They have been friends for 12 years now. Baker has offered advice and written letters of recommendation. He does this with aspiring broadcasters who show interest in the craft. He is paying it forward.

Choate has no formal voice training. Be authentic, Baker told him, and authentic in Choate’s mind was incorporating a nod to Baker. “The only thing that I know is Dan,” Choate said. “And that’s just the way it is.” There are others like him — Philly kids who listened to Baker, who wanted to be Baker, who imitate Baker. 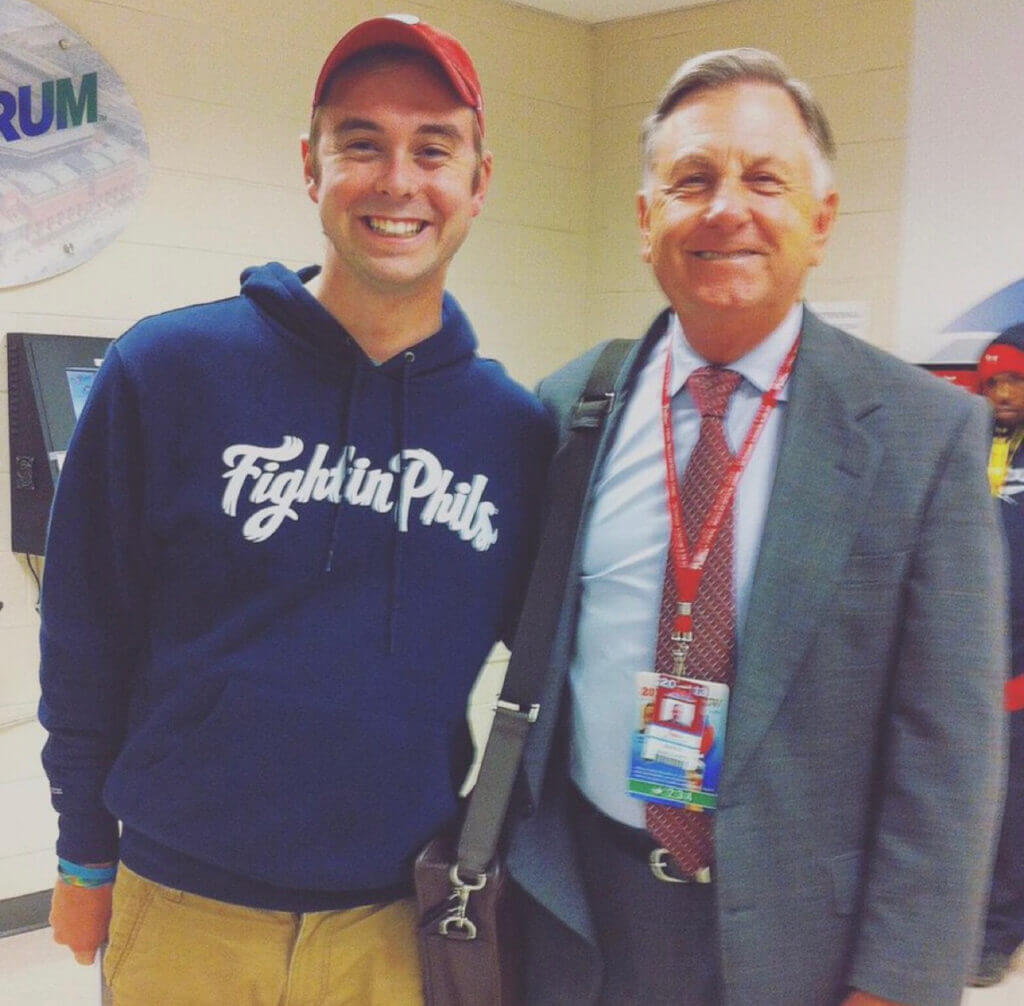 The Phillies will honor Baker before Friday night’s game. By the end of the season, he will have announced 4,000 Phillies games and 300,000 batters — he’s said the names of almost 20 percent of all major-league hitters to ever take an at-bat.

He does not look like he once did because doctors had to remove a 5.5-centimeter tumor — squamous cell carcinoma — from his maxillary sinus. The cancer had invaded his cheekbone. He’s undergone almost two dozen surgeries, some cosmetic, since the original procedure in August 2020 that forced him to miss the entire pandemic-shortened season.

Baker, 75, has since received some 30 radiation treatments. They have prevented a recurrence of cancer. But those treatments make Baker vulnerable to infection. He needed another complex surgery — one that lasted 12 1/2 hours — on July 15.

“And,” Baker said, “luckily, my voice wasn’t affected that much.”

He missed a total of 15 games from 1972, his first season, through 2018. The job is difficult — it requires late nights and fierce attention to detail. Baker has leaned on the elocution lessons his mother and father stressed when he was young. The moment he cannot enunciate how he expects to enunciate, Baker has said he’ll know it is time. It hasn’t happened yet.

“I’m a preacher of the type of PA announcing that you have to make sure that you speak accurately,” Baker said. “Concisely. People have to be able to understand you. You’re there to provide a service. So I’m not out of the screaming and shouting school. You know, I like to emote. I try to do so when it’s appropriate. And I also try not to do it when it’s inappropriate.”

He missed only six games last month. The Phillies have long envisioned honoring Baker this weekend, but he did not want to commit to it unless he knew he could call the game. The doctors cleared him last week.

“I really haven’t shared too much of this with people because I don’t want people to think I’m in worse shape than I am,” Baker said. “I don’t want them to feel a sense of sympathy, necessarily. Because there are a lot of people that are confronted with more challenging health issues than me. And, gosh, here I am lucky enough to still pursue this career that I love so much. If anybody ever stopped me and said, ‘Oh, you got a bad break.’ No. A very lucky break. My gosh. To be able to live the life that I have and announce the Phillies for 50 years. I have wonderful family and friends and associates. I feel a great sense of gratitude for all the wonderful things that have happened.” 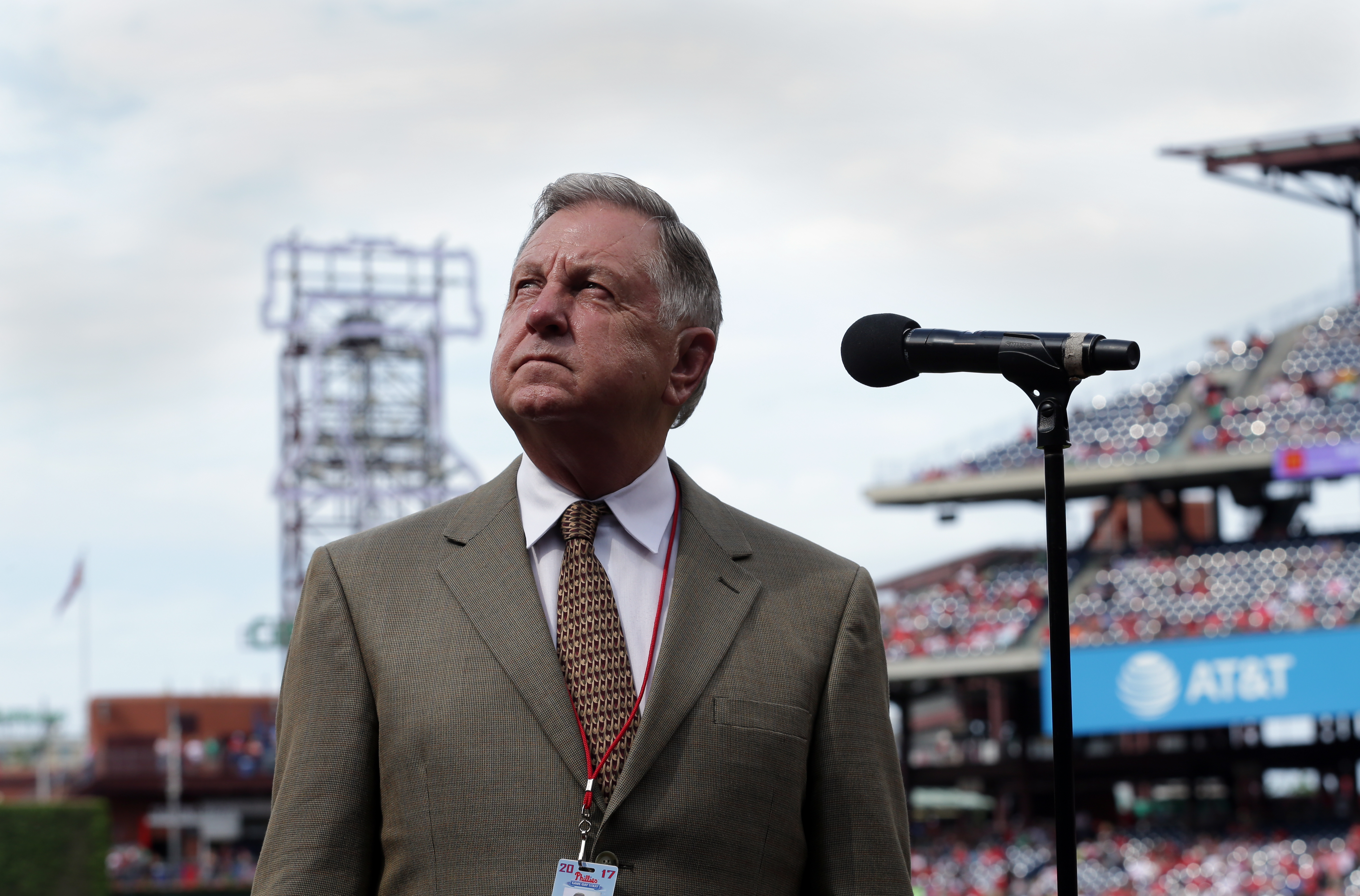 Dan Baker, pictured in 2017, has been the voice at the Phillies ballpark for 50 years. (Hunter Martin / Getty Images)

Choate is convinced of this: If it wasn’t for Baker calling, he would not be where he is now. Baker was there at every step — when Choate needed the confidence to audition in 2012 for the PA job at Double-A Reading; when he walked away from the job in 2017 to have his nights back with his newborn son; when baseball came calling again last April with the Triple-A Lehigh Valley gig. Choate works in marketing by day, then announces IronPigs games at night.

He printed the letter Baker sent to Lehigh Valley on Choate’s behalf. It’s framed on his desk. 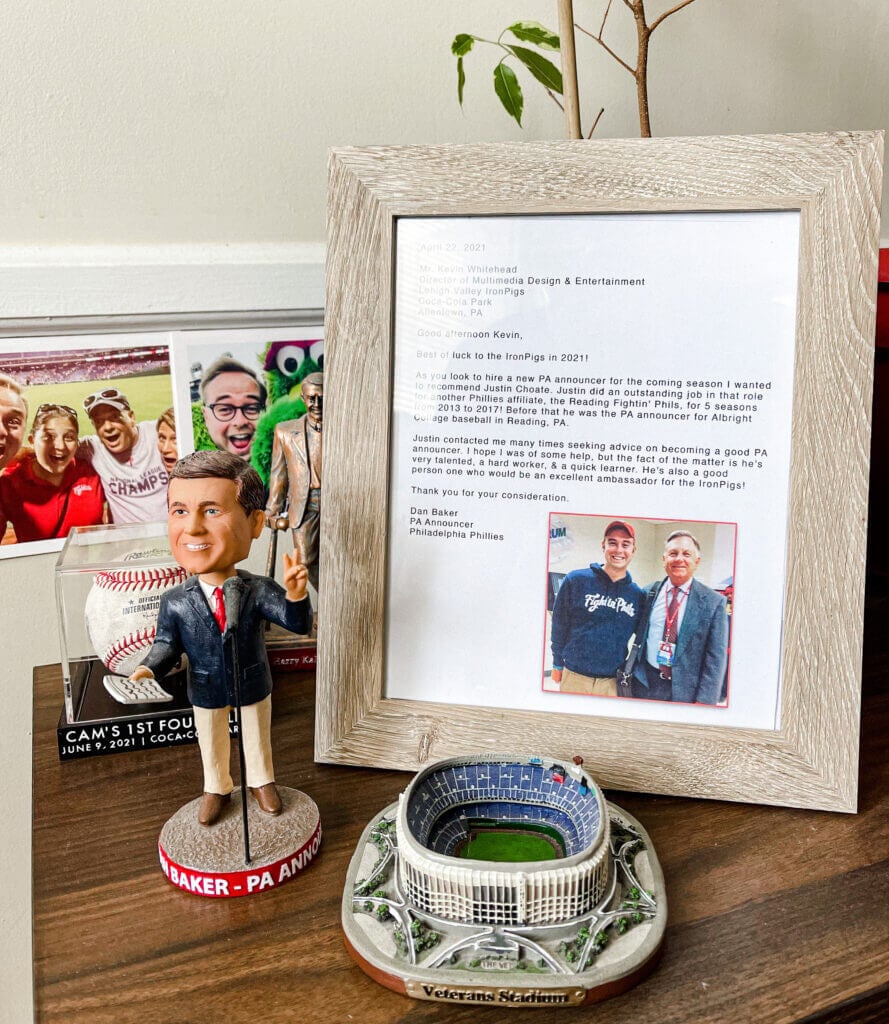 Before Baker was a PA announcer, he was a grade-school teacher in Philadelphia. His careers overlapped for almost a decade. He taught fifth and sixth grade at The Landreth School at 23rd and Federal Streets. At the ballpark, Baker is famous for his graciousness. That is rooted in his teaching days.

“Broadcasting, I love with all my heart,” Baker said. “I wouldn’t trade it for anything. But that is for the fans as opposed to doing something that maybe helps somebody else in a more concrete way. So I get a certain amount of enjoyment out of doing that.”

Baker has not forgotten how he began his 50-year run. Pat Cassidy was the press box steward during Eagles games at Franklin Field. Baker worked as a spotter and statistician for out-of-town broadcasters. “He would see me coming early to games and staying late,” Baker said. “You talk about paying it forward; he took an interest in a younger person.” Cassidy later became the director of stadium operations for the Phillies. He helped Baker land an interview.

Choate, a few months ago, authored an essay to commemorate Baker on reaching 50 years with the Phillies. “Who knows,” he wrote, “maybe someday a kid will grow up pretending to be Justin Choate, and thanks to Dan, I’ll know exactly how to handle it.” Years ago, Baker told Choate he would not be surprised to hear him announcing for a Philadelphia team one day.

“His voice is synonymous with Phillies baseball,” Choate said. “It’s the voice of summer for a lot of people in this area.”

To some, it means even more than that.