PHILADELPHIA — Soon after the Phillies released Didi Gregorius, his rookie replacement sent a text message. “Thank you,” Bryson Stott wrote to Gregorius. Teams in contention do not often pay a veteran with postseason experience $5 million to leave so they can hand a premium position to a rookie. But that is what the Phillies did Thursday afternoon.

“I knew I could go to him with anything on the field, and he would be honest and give me his perspective,” Stott, 24, said. “He went through it. He’s been in the league a long time. I’m going to miss him, for sure.”

So much of the Phillies’ decisions at the trade deadline were about the immediate — trying to end a decade-long postseason drought. They sacrificed young talent for a rental reliever (David Robertson) and rental starter (Noah Syndergaard). They improved the edges of the roster. But they were limited in what they could add because they were not willing to surrender their top pitching prospects. A week before the deadline, president of baseball operations Dave Dombrowski hinted that he would not be afraid to put them in his big-league rotation for 2023.

And, now, they have handed two important spots on the field — center field and shortstop — to two developing players. The priority is now, no question, but the Phillies are able to devote some energy toward 2023 by seeing how Stott and Brandon Marsh handle the assignments.

“To get this experience of being in the race,” Stott said, “it’s awesome.” 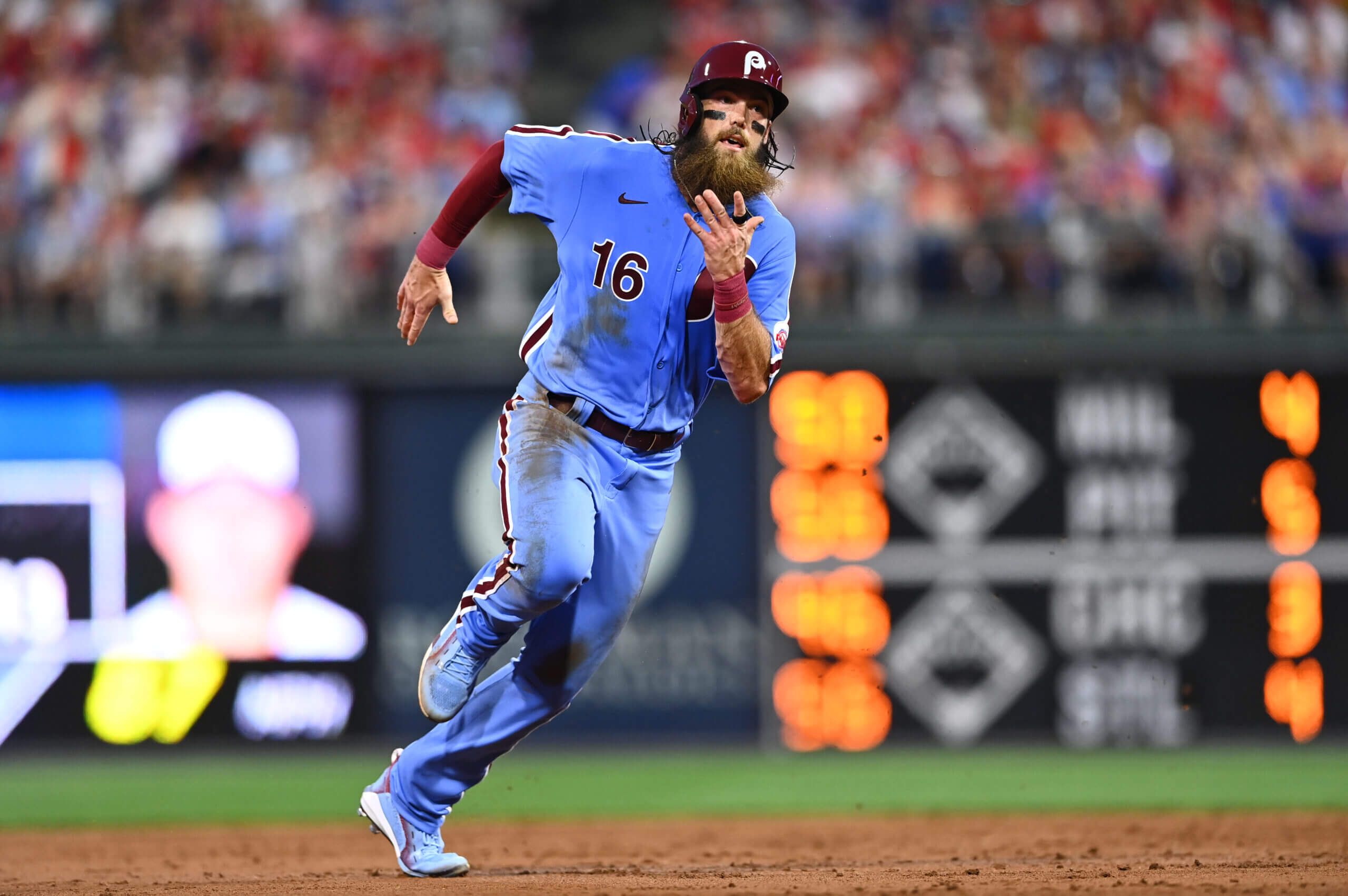 Brandon Marsh runs to third base in the third inning. He later scored on a Rhys Hoskins single. (Kyle Ross / USA Today)

The Phillies are optimistic about Marsh’s offensive upside, as are evaluators from other clubs, but the Phillies are aware that adjustments will require time to stick. Marsh is being thrust into a pennant race for the first time in his career. If, for two months, he chases down balls in center that would not have been caught before, the Phillies will take it. His hitting progression would be a bonus in 2022, but essential for 2023.

Marsh, 24, is under club control for five more seasons. The Phillies secured an immediate defensive upgrade with the hopes of generating a productive everyday player in the future.

Marsh is carrying a hideous 36 percent strikeout rate. The improvements will not happen overnight. The Phillies made a bet on Marsh’s pedigree as a high pick and a former top prospect. (They actually had intel on him from the 2016 amateur draft process; the Phillies arranged a private workout for Marsh at Citizens Bank Park before that summer’s draft. The Phillies selected righty Kevin Gowdy in the second round and Marsh went to the Angels 18 picks later.) It’s a good test for a big-league hitting program that has been better at correcting flaws in still-developing players’ swings this season.

“You don’t want to overload a guy,” Phillies interim manager Rob Thomson said. “You want to get to know him first. Get a feel for what he’s thinking and what he thinks he needs to work on. Then just try to mesh our ideas with his. Sometimes, that’s a long process. But we’re willing to be patient and stay with it. We think at some point he’s going to get back to hitting the way he’s hit in the past.”

Much of what hitting coach Kevin Long will stress is about timing.

“I’ve had one hitting session with him so far and it was awesome,” Marsh said. “He just explored some things and found out some stuff about me that I had no idea about. So it’s been awesome the first day.”

Stott entered Thursday batting .196/.262/.314, but the trends have been pointing upward for weeks. It’s why the Phillies were comfortable bestowing the shortstop job upon him. Stott has cut down on his whiffs; he’s walked as many times as he’s struck out over his last 139 plate appearances. He is hitting the ball harder. The Phillies, with the return of Jean Segura, are not asking Stott to be an offensive pacesetter. They just believe he can do better than Gregorius.

“His at-bats over the last six weeks have been outstanding — not only against right-handers but left-handers too,” Thomson said. “Clutch situations, he’s gotten on base. He’s had great at-bats. He’s seeing the ball well. He’s really proven to be a big-league player.” 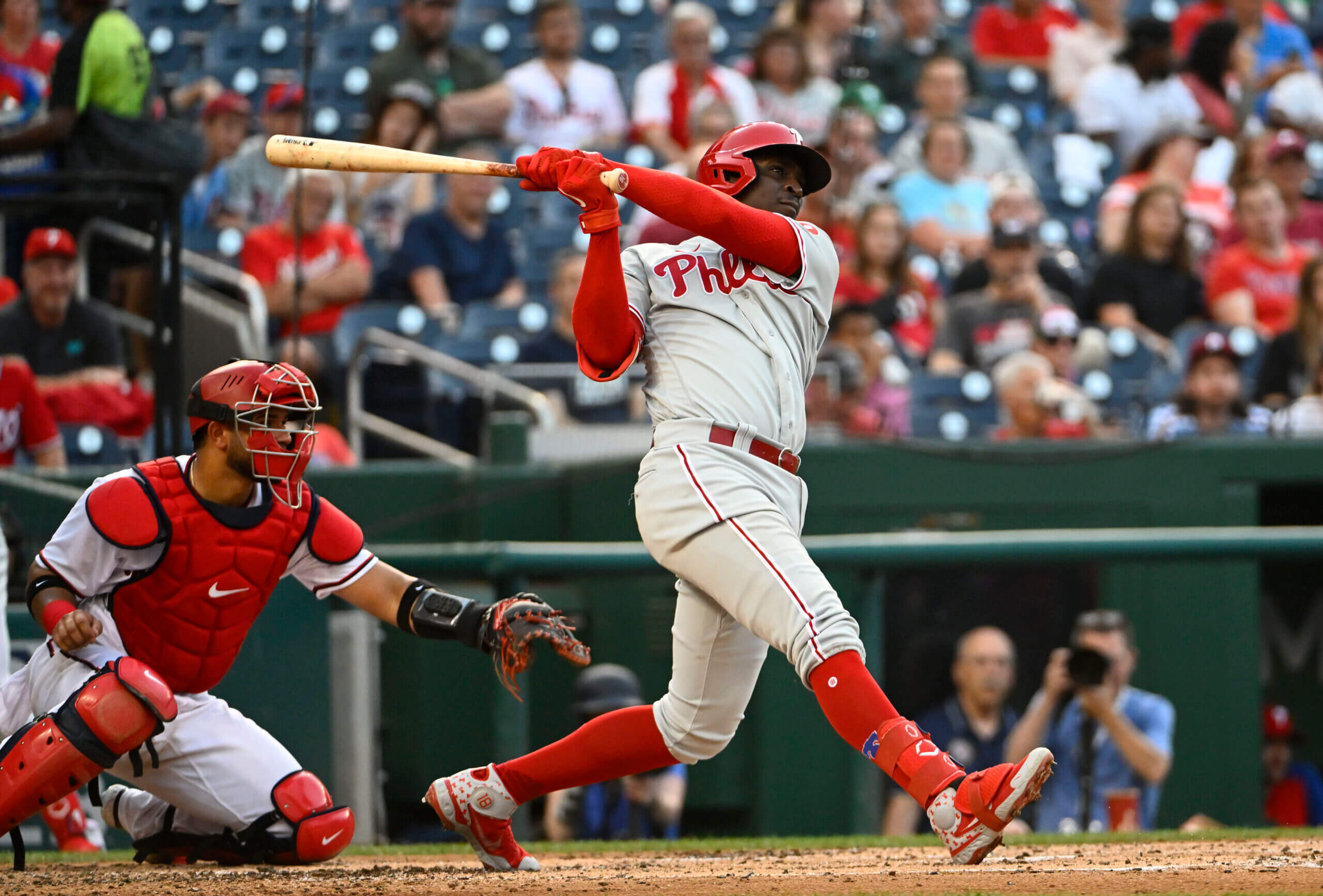 The Phillies could have kept Gregorius on the roster as a reserve, but the fit was not ideal. Gregorius, for one, has always been an everyday player. He’s proud of that. His value was contained in his pull-side power being enough to compensate for a free-swinging approach and below-average defense. But Gregorius lost the ability to pull the ball this season. Both the team and player cited persistent knee soreness as a reason for the disappearing power. Gregorius hit .181/.234/.284 in 167 plate appearances after he was activated from the injured list June 5.

Was there any thought of retaining Gregorius in a reduced role?

“Um, you know, we talked through it,” Thomson said. “But we felt like this was probably the best way to go.”

Was that option ever presented to Gregorius to see if he would go along with it?

“A little bit,” Thomson said. “But, at the end of the day, we just felt like this was the best move.”

Gregorius, like Odúbel Herrera and Jeurys Familia, was a sunk cost. The Phillies paid all three to go away. (Gregorius is making $15.25 million this year, while Familia and Herrera are making $6 million and $1.75 million, respectively.) It was sensible, but somewhat surprising still. The last time the Phillies released a player with as much money remaining on his contract as Gregorius was Michael Saunders in June 2017. That was not a team that considered itself a contender.

Every roster decision the Phillies make can be viewed in both big and small terms. If they are optimistic Stott and Marsh can occupy everyday jobs somewhere on the field in 2023 and bullish about one or two of the young pitching prospects taking a rotation job, that frees money to be spent elsewhere. The shortstop market will be robust this winter. It’s headlined by Trea Turner, whose name surfaced for a totally unrelated reason during Thursday’s NBC Sports Philadelphia broadcast with guest analyst Bryce Harper.

“He’s my favorite player in the league,” Harper said. “It’s not even close.”

For now, Stott is the shortstop, and it’s a lofty challenge as the postseason race intensifies.

“When somebody shows confidence in you,” Stott said, “it obviously instills a lot more in yourself.”