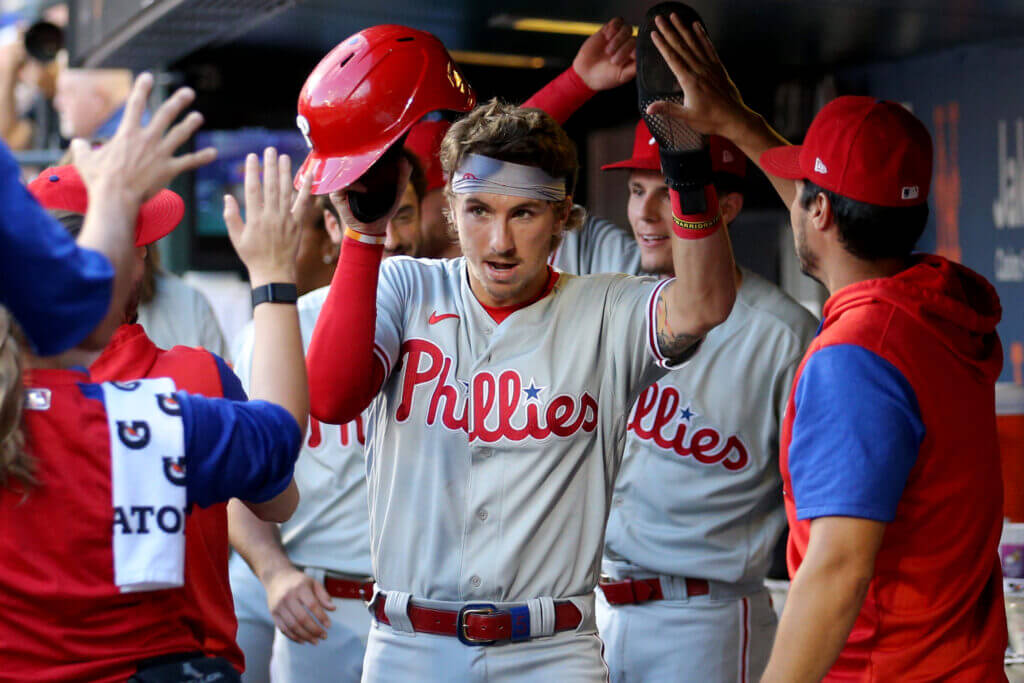 NEW YORK — They yelled and screamed Friday night from the visitors’ clubhouse at Citi Field, and after all of the postgame toasts to a high-level performance against a great Mets team, Kyle Schwarber relaxed in the corner of the room. As the veteran outfielder removed a black compression wrap from his achy right calf, Nick Maton howled from the showers. (This is a thing.) But Schwarber has been here before. He has tasted triumph. A few weeks into the season, he became the person in the clubhouse everyone looked toward. He is the backbone now.

Then, when Schwarber was not available for a big game, his replacement atop the lineup became the first player to reach base four times in a game against Max Scherzer. His replacement in left field fired a perfect throw to cut down the potential winning run in the ninth inning. The rookies — Bryson Stott and Matt Vierling — were all right.

“It’s just really cool,” Schwarber said. “It gives me goose bumps to think about it.”

The Phillies are growing up before everyone’s eyes, and an exceptional 2-1 win over the first-place Mets provided 10 more innings of evidence. Rob Thomson, the interim manager credited with creating a more relaxed vibe throughout the clubhouse, had wondered before the game how his players would respond to a charged atmosphere in Queens. Thomson is a mild-mannered Canadian who was content as a behind-the-scenes influencer. Now, in the biggest chair, he couldn’t help but admire what he saw.

“I love it,” Thomson said. “They played well. Poise across the board. It was really good.”

The visiting manager’s office is around the corner from the clubhouse and, as Thomson spoke, the shouting penetrated the walls. Thomson laughed. “This is every night,” Thomson said. It is. But this one felt special. The Phillies were everything they were not supposed to be — young, crisp in the field and stingy on the mound. They have matured into a club with a direction.

What a call by Scott Franzke pic.twitter.com/6LGJbvFa99

Schwarber looked over at Stott, who was demoted less than three weeks into the season and anointed the club’s everyday shortstop by August when the Phillies paid Didi Gregorius to leave. Stott batted higher than fifth in a big-league lineup, and all he did was begin the game with a hard-hit double against Scherzer. Stott scored the first run, then raced home to score the decisive run in the 10th inning. No player had ever safely gotten on base four times against Scherzer in his career. It was an amazing feat.

“To see that tonight,” Schwarber said, “the first time ever off a future Hall of Famer, that’s really cool.”

The whole thing is remarkable because Stott entered Friday batting .211/.273/.331 but had gained the trust of everyone in the dugout. That is how good his at-bats have been, even if the results haven’t always appeared. It is uncommon for a club to extend that trust to a rookie — at a premium position on a contender at this time of year — but Stott has earned it.

“I felt like he did an unbelievable job of staying the course,” Schwarber said. “Keep working. To see him tonight and get rewarded … I mean, the guy’s at-bats have been unbelievable. It’s like the hardest .200 you’ll ever see.”

“He’s comfortable and he’s going right now,” said Vierling, who made the key throw from left field. “He’s such a good player. To see him getting going like that is huge for our team. I mean, all of us have seen it. We saw it in spring training, how good he is. We saw how good a player he is, really, all season. It’s now finally starting to come.”

There is so much baseball to play. But Stott has it, and the Phillies haven’t seen it for a long, long time. What does a night like Friday mean?

“Oh, it’s massive,” Schwarber said. “That’s just confidence. The cool thing about it is that’s a playoff-like atmosphere. It’s a little taste of what it’s going to be like. For Stotter to do what he did tonight, he only builds on that. Right? He’s not the complete player yet. There’s still a lot of room for him. And I mean that in a really good way. There’s still a lot of room for that guy, as he keeps getting older and keeps progressing. He’s very mature for his age.”

A few hours before the game, in a quiet moment, Darick Hall and Vierling sat at their lockers. The rest of the room was empty, save for a few relievers passing through. The two rookies prepared. Hall grabbed a bat and practiced his swing. Vierling retaped the handle of a bat. Everyone in there knows this weekend is a barometer. When the Phillies stepped onto the field for batting practice, it wasn’t sweltering. The cooler air made it feel more important.

“Honestly, all of us young guys are starting to feel comfortable and really contributing in a good way,” Vierling said. “Just more playing time. The better and more comfortable you feel — especially big moments like this — are going to help down the road.”

This is new territory for so many players on the Phillies’ roster. After tossing seven innings of one-run ball, Ranger Suárez was asked if it felt like a postseason game.

“That I can’t really tell you because I’ve never been in playoff game,” Suárez said. “But it was a real exciting game.”

The Phillies and Mets are rivals, but rarely have they both been this good at the same time. Friday marked only the sixth time since 1962 that they faced each other while both clubs were 13-plus games over .500. It hadn’t happened since Sept. 7, 2008. The series will feature each team’s three best starting pitchers. After Scherzer, it’s Jacob deGrom on Saturday for New York.

The real prize is in October, but a little August validation is a start. Thomson stuck Stott at the top of the lineup because it meant the least disruption for everyone else. But Stott has flashed the qualities of a good leadoff man for weeks.

“No doubt,” Thomson said. “Because he sees a lot of pitches. He grinds at-bats out. He really knows the strike zone. And he can hit.”

The interim manager was asked, after the win, how rewarding it was for him and the rookies that everything fell into place as designed.

Stott is 6-for-7 this season against Scherzer. Ten percent of his hits in the majors are against one of the greatest pitchers of this generation.

“When you get in the division,” Scherzer said, “they really start keying in on what they can do against you, and they really start picking up on your tendencies and they get more comfortable with their at-bats and your pitches and how they break against you. He put together some good at-bats today. This is part of Major League Baseball. There’s always going to be somebody that can go out there and find a way to grind an at-bat and be able to get hits against you. It’s what you do next. We’ll continue to have good battles as we continue to go along.”

There will be more chances, maybe even in October. It had been 11 weeks since the Mets last saw the Phillies. Things have changed. On Friday night, Stott and the Phillies showed how much.

“This is what everyone in the clubhouse wants this team to be,” Schwarber said. “It might not be perfect. But we’re going to fight and scratch and claw.”