Quintana, 33, was coming off two straight injury-riddled seasons and no longer was a reliable innings-eater. He was a free agent with few suitors. The Pirates gave him a bottom-dollar contract and a promise that he’d get a shot at making their rotation.

If it worked out, Quintana would lock down a full-time gig and reignite his career with an eye toward bigger things (and more dollars) next year. The Pirates would gain some stability and veteran leadership, and could try to flip Quintana to a contender at the Aug. 2 trade deadline.

If it didn’t work out … well, then it would be a sort of mutually assured destruction. Quintana would be unproductive and unhappy, and the Pirates would be stuck with him.

So far, so good. Wednesday marked the midpoint of the Pirates’ season. One night earlier, Quintana turned in another solid outing in a 5-2 victory against the Yankees.

It arguably was Quintana’s most important start in years. The left-hander put together a strong, smart performance — five innings pitched, six hits, one run, zero walks and seven strikeouts — in front of a sold-out crowd against the best team in baseball.

“Huge game,” Quintana said with a soft smile. “Being successful on the mound and giving my team an opportunity to win is most important in my mind. I want to prove how good I can be. So, yes, it was really special.”

The trade deadline is less than a month away. The Pirates are going nowhere in the NL Central. Quintana is off to a very good start. It’s not hard to do the math.

#Pirates LHP José Quintana is among the most popular pitchers on the trade market right now, sources say, especially after last night’s win over the #Yankees. The #BlueJays are one possible landing spot due to Kikuchi’s struggles and Ryu’s injury. @MLBNetwork @MLB

“If you’re asking me about trades, I’m not thinking about that right now,” Quintana said Wednesday afternoon. “I can’t control any of that. … Keep pitching every five days, get my body prepared the best I can, and that’s it. Hopefully, I’ll stay here, but I don’t know. Let’s see.”

Over 16 starts this season (his most since 2019), Quintana is 2-4 with a 3.33 ERA (his best since 2016). His 21.6 percent strikeout rate is lower than in recent years, but that’s not surprising considering his fastball has less oomph (91.1 mph average) than it used to. He has allowed seven home runs but mitigates damage with a 43.2 percent groundball rate.

The changeup has become a larger part of Quintana’s arsenal this year. He throws it 24 percent of the time, compared to 8.7 percent in 2020. That’s made his four-seamer — which has a minus-8 run value, tied for ninth-best in the majors — a more effective weapon.

At this stage of his career, Quintana out-thinks batters instead of overpowering them. He doesn’t get flustered when there is traffic on the bases. But his pitch efficiency is just so-so — he’s averaging 86 pitches per game and only 5 1/3 innings per start.

“Nothing is done yet, so I want to stay focused on one start at the time,” he said. “I believe I can be better. I want to keep rolling, keep trusting in my stuff.” 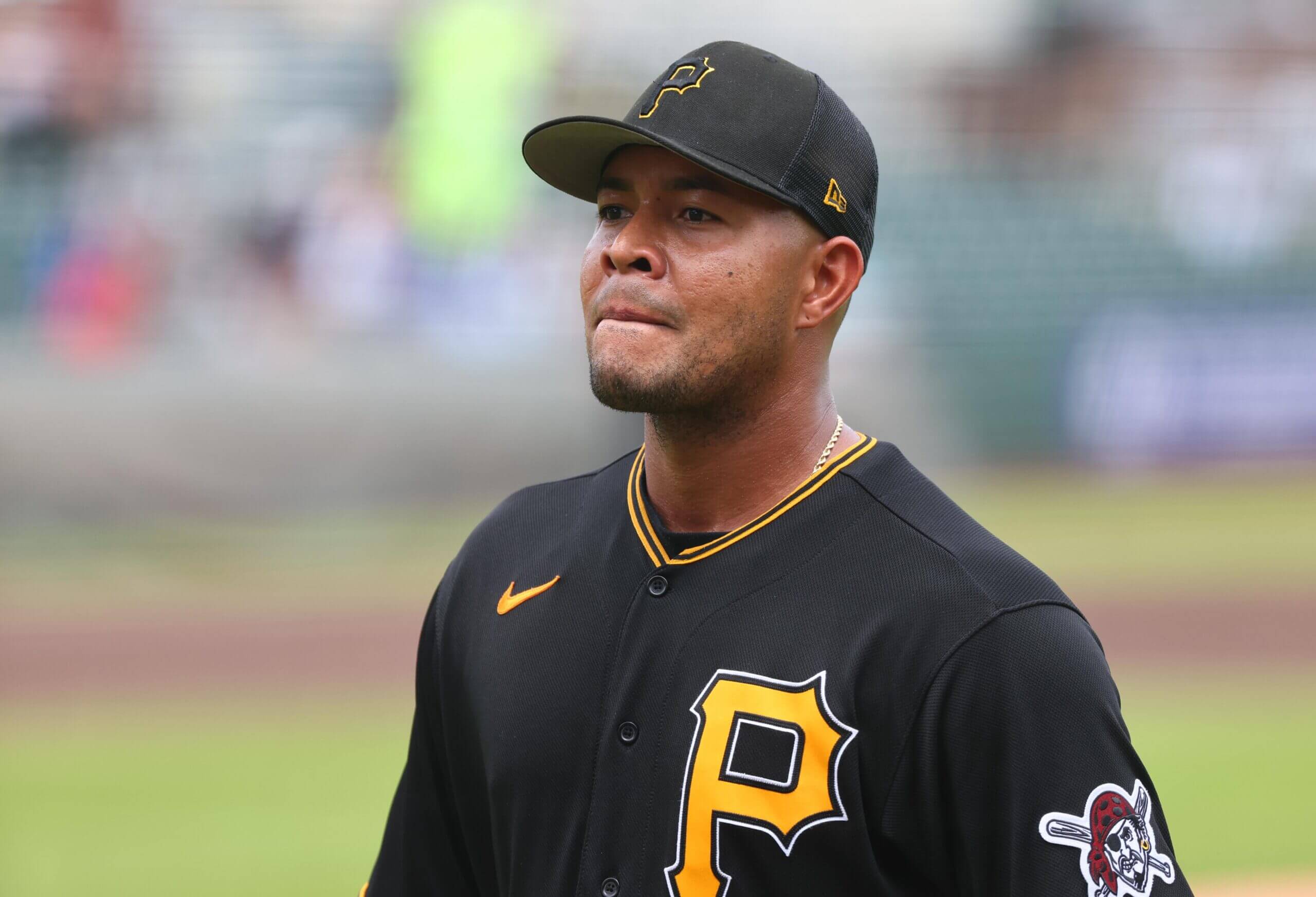 José Quintana has been “as advertised” on the field and “awesome” in the clubhouse, manager Derek Shelton said. (Kim Klement / USA Today)

In 2021, Quintana received an $8 million contract from the Angels but couldn’t hold his rotation spot and was designated for assignment for the first time in his career. Claimed off waivers by the Giants, he made five relief appearances over the final month of the season.

Quintana signed a $2 million deal with the Pirates on Nov. 29, three days before rosters were frozen because of the lockout. Even though spring training was truncated and hurried, Quintana was in the rotation on Opening Day.

“We showed confidence in him right from the get-go,” manager Derek Shelton said. “He’s been as advertised on the field. And in our clubhouse and dugout, he’s been awesome around the young players.”

On Wednesday, journeyman reliever Manny Bañuelos joined the team after being acquired from the Yankees. He spent an hour with Quintana in the clubhouse kitchen, talking about pitching and getting to know the Pirates’ pitching staff. Bañuelos and Quintana have been friends since 2008, when they were teammates in the Dominican Summer League.

“Everybody knows about Quintana,” Bañuelos said. “He’s a great pitcher who’s been with a lot of experienced guys on different clubs. He probably can help me, too.”

Who else can Quintana help this season? He’s not a high-impact starter, but he is versatile and can hold down the back end of a rotation — the kind of pitcher every contender can use. He’s affordable, too, with about $995,000 remaining on his contract. The Pirates don’t have to trade him, but general manager Ben Cherington always is on the lookout for more building blocks.

The Pirates probably could get a couple of good prospects for Quintana. His rotation spot could be filled by Miguel Yajure, Bryse Wilson or Mike Burrows.

A free agent this winter, Quintana could return to Pittsburgh in 2023, although his price tag almost certainly will be higher.

“For sure, I want to come back here,” Quintana said. “But I think it’s too soon to talk about that. I want to keep my eyes focused on this season, one start at a time.”