PITTSBURGH — Kevin Newman got a day off Thursday, but it wasn’t just because it was his 29th birthday.

The night before, Rowdy Tellez, the Brewers’ 255-pound first baseman, stepped on Newman’s right hand during a rundown. By the time Newman got back to the Pirates’ dugout, his hand was numb. He couldn’t grip a bat, so he had to leave the game.

By Thursday morning, Newman was still sore but otherwise OK.

“A scary moment,” Newman said. “But it could have been a lot worse.”

Newman was good to go Thursday but was held out of the lineup just in case. Tucupita Marcano started at second base with Oneil Cruz at shortstop.

That’s a good place to begin this “If Newman thinks he’s hurting now, wait until he hears Michael Chavis playing the ukulele” edition of the Pirates Fast Five.

Shortstop used to be Newman’s everyday spot, but that’s over now that Cruz is here. If Marcano catches fire — he went 5-for-8 with two RBIs and two runs scored in his first two games after being recalled Wednesday — Newman could be spending even more time on the bench.

Does Newman still fit with this team? He was careful in his reply.

“I don’t really think that far in advance,” Newman said. “It’s not my decision, anyway. I’ll control what I can control, and just try and get better and contribute any way I can.”

Since he came off the injured list July 8, Newman has started 19 games, all but two of them at second base. The position is not new to him — Newman played in 98 games there during the first nine years of his pro career — so he adapted quickly.

“At first, it was a little bit different, a little bit strange,” Newman said. “But you go out there every day and get the reps you need to get comfortable.”

Newman said it’s been easy to build a repertoire with Cruz, the 6-foot-7 rookie shortstop. “It’s gone very smoothly, actually,” Newman said. The two middle infielders haven’t seemed out of sync and have a feel for each other’s lanes and how to approach plays.

Cruz dwarfs Newman by 7 inches, but Newman has oodles more big-league experience. Yet Newman said he hasn’t felt it necessary to micromanage when they’re on the field together.

“I don’t think there really is like a ‘lead person,’” Newman said. “Oneil is very alert, in terms of positioning. I’ve played with middle-infield guys that haven’t been that way. I haven’t really needed to say much to him. It seems like he takes pride in that part of his game, which makes it a lot easier.”

Chavis and his ‘little uke’ 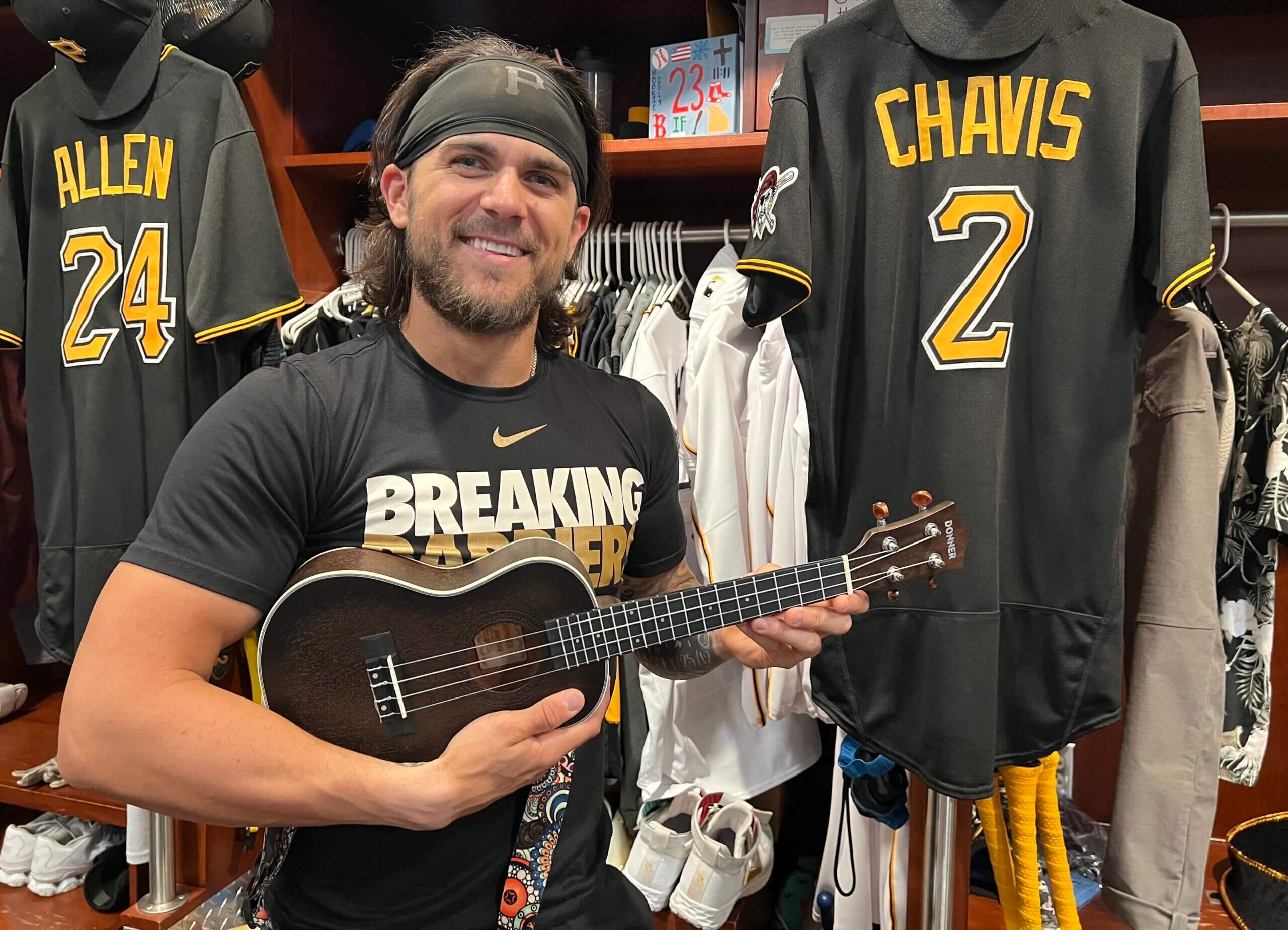 Michael Chavis showed off his new ukulele in the Pirates clubhouse before Thursday’s game. (Rob Biertempfel / The Athletic)

Next time you’re at Dave & Buster’s in the North Hills, check out the high score on the pitching machine. Chavis set the mark recently when he stopped in for a bite.

“It was the first time I’d hit the jackpot,” he said.

Well, Chavis does have an advantage, being a pro ballplayer and all.

Anyway, Chavis and his fiancée, Sarah, giddily scooped up all the tickets and went to the prize booth. They picked out some candy and then Chavis spotted a toy ukulele.

“I don’t know much about stringed instruments, but I was just like, ‘Let’s see what happens,’” Chavis said.

Chavis messed around with it every day, tuning the strings and randomly strumming, and eventually went on YouTube to learn some songs. His birthday is Thursday, so Sarah bought him a professional grade ukulele. It came with a carrying case and is the right size to take along on the 10-day road trip to Baltimore, Phoenix and San Francisco.

“I’ve always wanted to play guitar since I was a kid, but I figured that’s too heavy and kind of tough to carry everywhere,” Chavis said. “My little uke is the perfect little thing.”

The Pirates have a couple of long, cross-country flights on this trip. Chavis doesn’t have much experience playing the ukulele, so it sounds a bit … um …

“It’s pretty brutal,” Chavis admitted with a laugh. “Until this, I’d never touched a string instrument before. Hopefully, I’ll get better at it quick so it won’t be so hard on the boys. Right now, I’m kind of hiding when I practice.”

Chavis played saxophone in his middle-school band. That lasted about two months, until he broke his hand.

“After that, I had to play the bongos because that was the only thing I could play with one hand,” Chavis said with a shrug. “That’s my life.”

Perhaps this will lead Chavis to a career after baseball.

“I could be in a bongo-ukulele-saxophone band,” he said.

Marcano is full-steam ahead 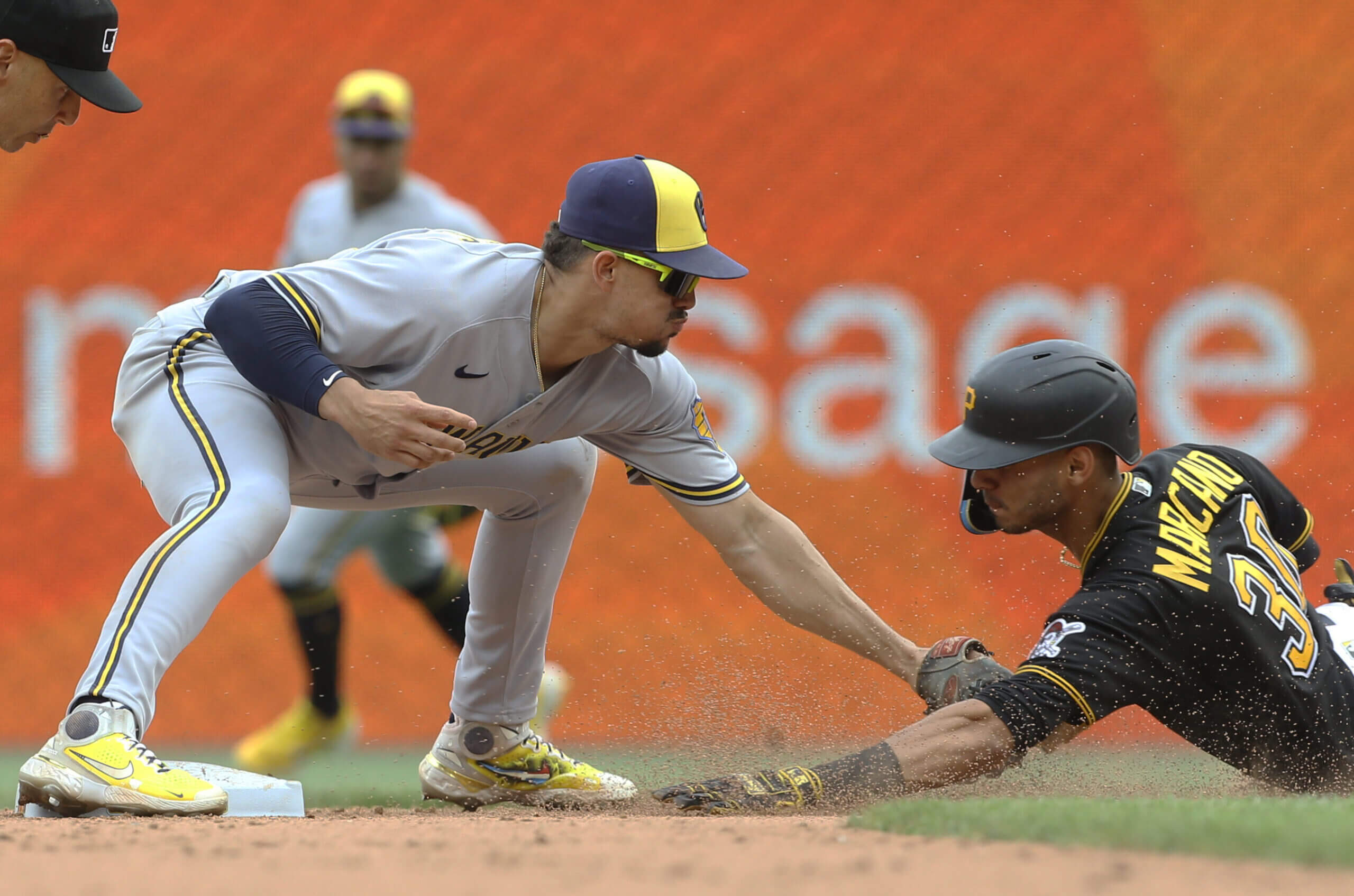 Willy Adames tags out Tucupita Marcano as the rookie tries to stretch a single into a double. (Charles LeClaire / USA Today)

“I woke up this morning feeling like something good was about to happen,” he said Wednesday afternoon. “And then I received a phone call.”

Triple-A Indianapolis manager Miguel Perez was on the line to tell Marcano he’d been recalled by the Pirates. A few hours later, Marcano started in left field against the Brewers. He had three hits, including a triple.

“Every call-up is filled with opportunities,” Marcano said through an interpreter. “I’ve always seen it as an opportunity for me to demonstrate what I can do, not only for myself, but especially to help the team get wins.”

Marcano got two more hits Thursday but showed he still has things to learn. With the score tied at 3 in the ninth inning, Marcano singled to right and was thrown out trying to stretch it into a double.

Marcano plays at full speed and forces defenders to make precise plays. In this instance, Tellez, second baseman Kolten Wong (a two-time Gold Glove winner) and shortstop Willy Adames got the job done. By making the final out of the inning, Marcano took the bat out of Bryan Reynolds’ hands.

“But it’s hard to fault aggressiveness,” manager Derek Shelton said. “If he goes half-speed out of the box, then decides he’s going to go, then I’d probably have an issue with it. But he went full-tilt, thinking he was going to go to second the whole time. It’s really hard to fault guys when they play the game hard.”

Bednar out of action again

Closer David Bednar was placed on the 15-day IL retroactive to July 31 because of what the Pirates described as low back inflammation. It’s the same injury that benched Bednar for a few days in late June.

Sports medicine director Todd Tomczyk said it’s too soon to say when Bednar will return or if he’ll need a rehab stint in the minors. Tomczyk wasn’t specific when asked if the injury is muscular in nature or something else, like a disk problem.

“There’s a lot of anatomy back there,” Tomczyk said. “The low back in general is just inflamed. We want it to calm down, then we’ll continue to move forward.”

Bednar’s back problems cropped up for the first time after he threw 2 2/3 innings and two innings (75 total pitches) in back-to-back outings in mid-June. He’s made 14 appearances since, none of them longer than one inning.

Another catcher in the mix

The Pirates have used six catchers this season, twice as many as last year and the most since 2016 (six). A seventh catcher joined the team Thursday — well, sort of — when Taylor Davis was selected from Indy. Davis was called up because Tyler Heineman went on the 10-day IL with a strained right groin.

Davis didn’t stick around long. On Friday, the Pirates claimed José Godoy from the Twins and designated Taylor for assignment. Godoy, 27, appeared in 18 games in 2021-22 with the Mariners and Twins and batted .150/.244/.175. He was DFA’d on Monday when the Twins selected the contract of right-hander Aaron Sanchez.

When Heineman came up lame during Wednesday’s game against the Brewers, the Pirates had to dip into the minors for a replacement. Michael Perez was traded, Roberto Pérez had season-ending surgery and Knapp was cut. As for VanMeter, let’s just say he’s not the best option at catcher, even in an emergency.

VanMeter was forced to go behind the plate on May 7 against the Reds when Roberto Pérez tore his left hamstring and Knapp was ejected. It was VanMeter’s first time catching since high school, and it did not go well — the Pirates gave up seven runs in one inning.

Tyler Stephenson on Josh VanMeter catching: “When I went up to hit, I told him just to take it to arbitration, so he could get paid a little more. When he came up his last at-bat, he was like, ‘Man, my legs are already hurting.’ It was funny.”

Spray tan, short shorts and not a care in the world: my quest to have a big, dim himbo summer