Adam Wainwright, the Cardinals’ ageless and battle-tested right-hander, went into his start Friday riding a 32-inning scoreless streak against the Pirates.

“We’re at the point where we need to do something different because the formula so far has not worked,” Pirates manager Derek Shelton said before the game.

The natural inclination for an opposing manager is to preach patience because Wainwright usually tries to get hitters to chase by chucking a lot of breaking balls. Yet the last couple of times against the Pirates, Wainwright had excellent control and kept the ball over the plate. That led to quick at-bats, hesitant swings and soft, fruitless contact.

“We need to be a little more creative,” Shelton said. “We have got to figure out a way to attack him differently.”

What the Pirates wound up doing, though, was attacking themselves in what turned out to be a 5-3 loss. A blunder in the field gave the Cardinals a run in the first inning. Overeager base running wiped out a Pirates scoring chance in the fifth, when it was still a one-run game. Then the Cardinals scored four runs in the sixth on four hits and two walks.

Any misstep seems twice as costly whenever the Pirates face Wainwright.

“It does magnify things,” Shelton said. “When you make a mistake like that and then you compound it by giving free passes, good teams capitalize on that, and they did tonight.” 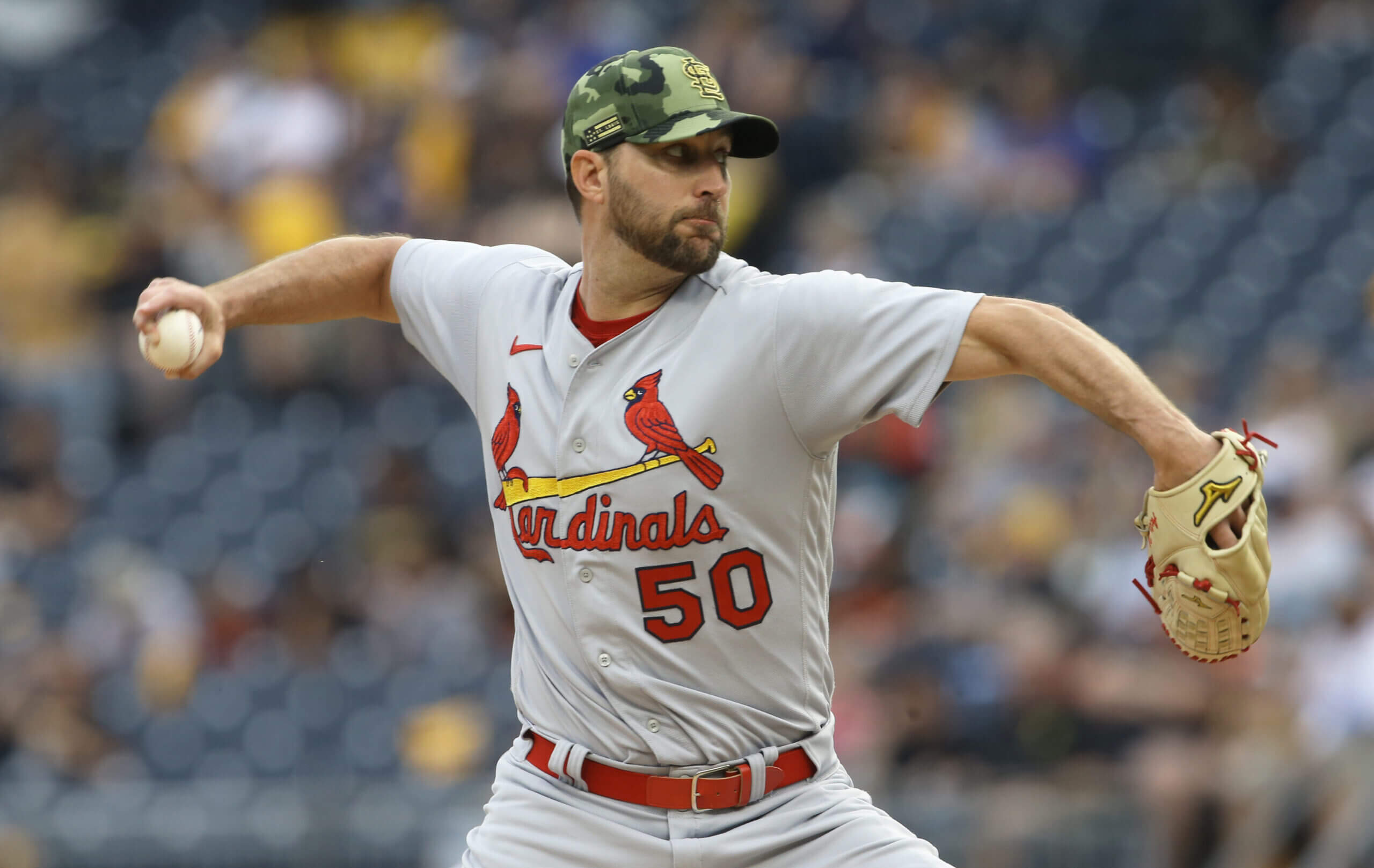 The Pirates finally scored against Adam Wainwright, but not before he set a record against them. (Charles LeClaire / USA Today)

Wainwright, of course, did what he always does. The 40-year-old righty racked up six zeros and extended his scoreless run against the Pirates to 38 1/3 innings. According to the Elias Sports Bureau, that moved Wainright ahead of Phil Niekro and Jack Baldschun (36 innings apiece) for the longest such string against the Pirates since the start of the expansion era in 1961.

The streak was snapped with one out in the seventh, when Michael Chavis drove an 0-1 curveball into the left-field seats. Even so, Wainwright, who yielded four hits and three walks and struck out three over seven innings, cruised to his 10th straight win against the Pirates.

“In order to talk about how he pitches, I think you’ve got to acknowledge how Yadi (catcher Yadier Molina) calls the game and how well they work together,” Chavis said. “They’ve been doing it forever, so there’s times when it’s like they’re not even calling pitches. It seems like they’re just on the same page and they roll through it. It’s cool to watch it.” 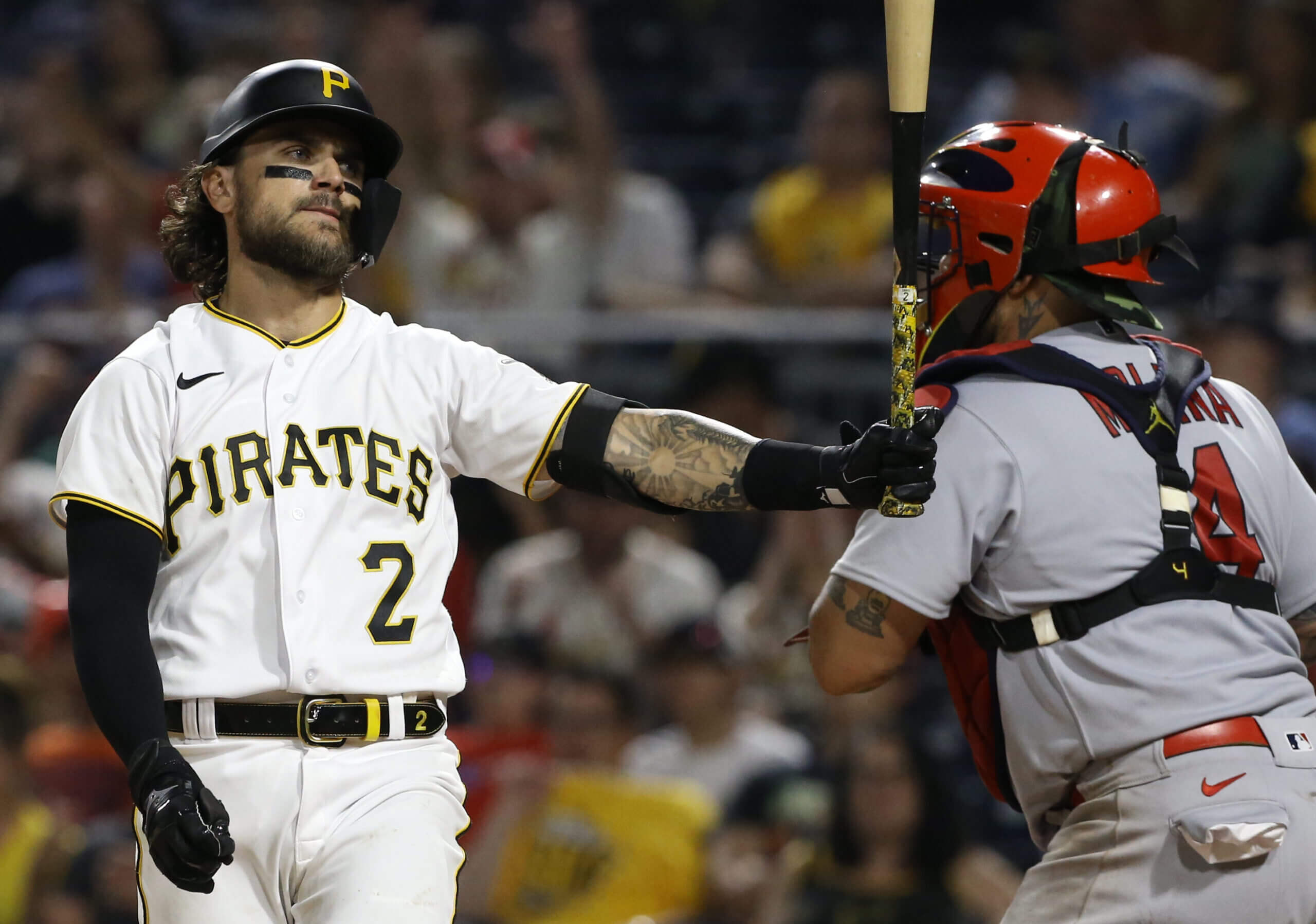 Michael Chavis is called out on strikes to end the eighth inning as the Pirates’ comeback fell short. (Charles LeClaire / USA Today)

Singles by Tommy Edman and Paul Goldschmidt gave the Cardinals runners at the corners with one out in the first inning. Pirates right-hander Zach Thompson got slugger Nolan Arenado to fly out to shallow right field.

Jack Suwinski caught the ball a dozen or so strides from the infield dirt and fired it home. Edman paused at third as Chavis, the first baseman, cut off the throw with his back to the plate and began running toward Goldschmidt, who was nearly halfway to second base.

“I am the cutoff man in that situation, so it’s kind of a read-predict type of thing,” Chavis said. “I’m waiting to hear from the people behind me on what’s going on. I never heard like, ‘Let it go,’ or anything like that, so I just waited for the play unfold.”

Edman broke for the plate. Chavis tossed the ball to second baseman Josh VanMeter, who glanced at Edman and realized there was no chance to get an out at home. Edman scored well before Goldschmidt was tagged out to end the inning.

“All this happened in a split second, just kind of reacting,” Chavis said. “That was a little bit of a weird one. Yeah, a lot happened. … That was an awkward play.”

Shelton was more succinct: “I don’t think they designed it that way. We definitely didn’t design it that way.”

With two outs in the fifth, Rodolfo Castro singled and Ben Gamel walked. That brought up Hayes, who entered the game ranked 10th in the National League with a .383 on-base percentage. Trailing 1-0, it was the Pirates’ best chance of the night against Wainwright.

When Hayes took ball two, Castro decided to take off for third. Arenado, who was playing behind the bag and guarding the line, sprinted in and dove to catch Molina’s throw. As he crashed-landed, Arenano tagged Castro and snuffed out the threat.

The worst part was the caught stealing took the bat out of Hayes’ hands.

“Yeah, that was part of our conversation with Rudy,” Shelton said. “We have to realize the situation of the game. It’s good to be aggressive and it’s good to think aggressively, but understanding where the lineup is, where the pitcher is at that time, he had just walked Gamel. With young players, we’re going to see mistakes at times. It’s our job to talk and teach and continue to develop.”

In the sixth, the Cardinals put six men on base in a row against relievers Heath Hembree and Anthony Banda and upped their lead to 5-0.

Cardinals lefty reliever Génesis Cabrera has an electric fastball and a dandy curve, and induces a lot of soft contact. But, for whatever reason, he has a 6.75 ERA and a 1.43 WHIP in 15 outings against the Pirates. They got two runs (one of them unearned) off him in the eighth.

A bad throw by Arenado — just his fourth error of the season — opened the door. Bryan Reynolds bounced an RBI single to left. Yoshi Tsutsugo’s run-scoring grounder pulled the Pirates within 5-3. That was it, though. The Pirates had a short bench because Daniel Vogelbach is nursing what Shelton described only as a lower-body injury. Cardinals closer Giovanny Gallegos struck out all five batters he faced to end it.