PITTSBURGH — Michael Chavis went into this season expecting to play a lot for the Pirates, but he never figured he’d become their everyday first baseman.

“I thought first base would just be part of it,” Chavis said. “I didn’t think it would be so much exclusively at first base. I thought I’d kind of bounce between second and third and first.”

Chavis has appeared in a team-high 66 games at first base. Yoshi Tsutsugo, who got a $4 million deal last winter to be the starting first baseman, played only 35 games there because of injury and ineffectiveness.

Wednesday, Tsutsugo was designated for assignment. He batted .171/.249/.229 with two home runs and a 26 percent strikeout rate.

“We felt it was time to move on,” manager Derek Shelton said. “Time to start giving opportunities to other people.” 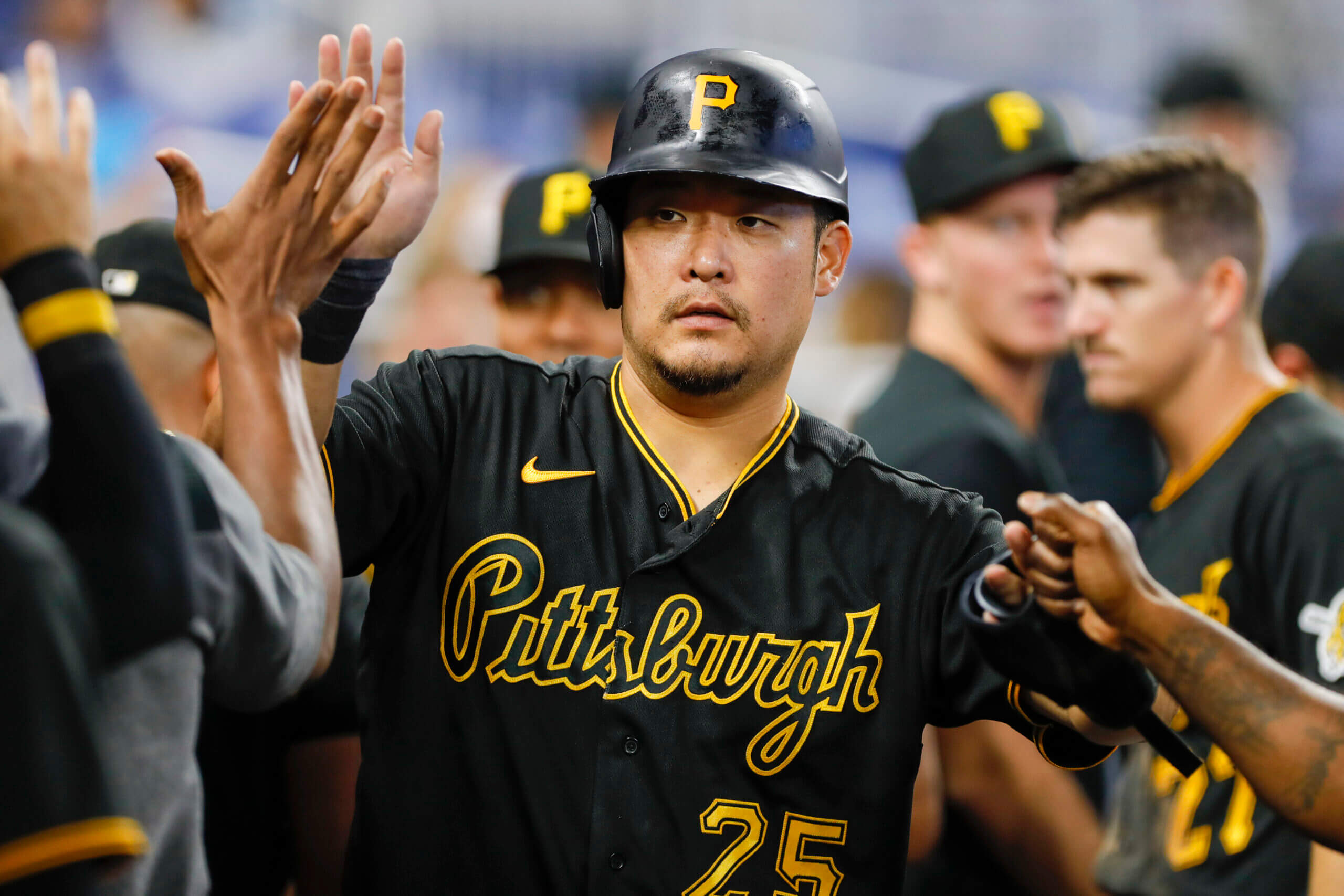 Yoshi Tsutsugo ended up playing only 35 games at first base this season. (Sam Navarro / USA Today)

Chavis probably will handle the bulk of the work at first base over the final two months of the season. Utilityman Josh VanMeter and rookies also will get some time there.

Normally an outfielder, Madris made his first big-league start at first base Wednesday against the Brewers. He last played the position six years ago as a college sophomore.

“We want to expose Bligh to a new position,” Shelton said. “We will ease him into it and make sure he gets some work.”

For Madris, first base might be only a part-time gig or it could be an audition for a bigger role there down the road. Either way, it’s an indication of the Pirates’ ongoing issues at first base.

Tsutsugo stuck around as long as he did — much too long, arguably — because there weren’t any great big-league-ready options in the minors. Mason Martin was passed over for a 40-man roster spot last offseason and has done nothing this year with Triple-A Indianapolis (.192/.264/.409, 38 percent strikeout rate) to warrant a call-up.

Shopping for first-base depth at the trade deadline, general manager Ben Cherington landed Malcom Nuñez from the Cardinals in the José Quintana deal. Nuñez, 21, is batting .255 with 17 homers this year and was assigned to Double-A Altoona.

“He’s a little bit of something we don’t have a lot of — a corner guy with real bat-to-ball skills, the hit skill with some strength and power,” Cherington said. “We’re excited to see if we can help him tap into even more of that offensive potential.”

Pirates management will explore other internal options. Shelton revealed last week that the club has discussed getting outfielder Cal Mitchell some time at first base beginning next year.

“You know how much we like flexibility, so I don’t think I would ever count anything out — well, I would (think) he’s probably not gonna play second or short,” Shelton said with a grin. “But I do think at some point, we may introduce (first base) to him.”

Last season, the Pirates used 12 first basemen. Colin Moran got most of the starts. John Nogowski was a thing for a couple of weeks, then vanished. Will Craig had some trouble with the fundamentals. Cole Tucker, Jacob Stallings and Michael Perez made cameo appearances.

This year’s list is much smaller: Chavis, Tsutsugo, VanMeter, Yu Chang, Daniel Vogelbach, Diego Castillo and Madris. Tsutsugo and Chang were cut loose, Vogelbach (who is below average defensively) was traded and Castillo was sent back in the minors. 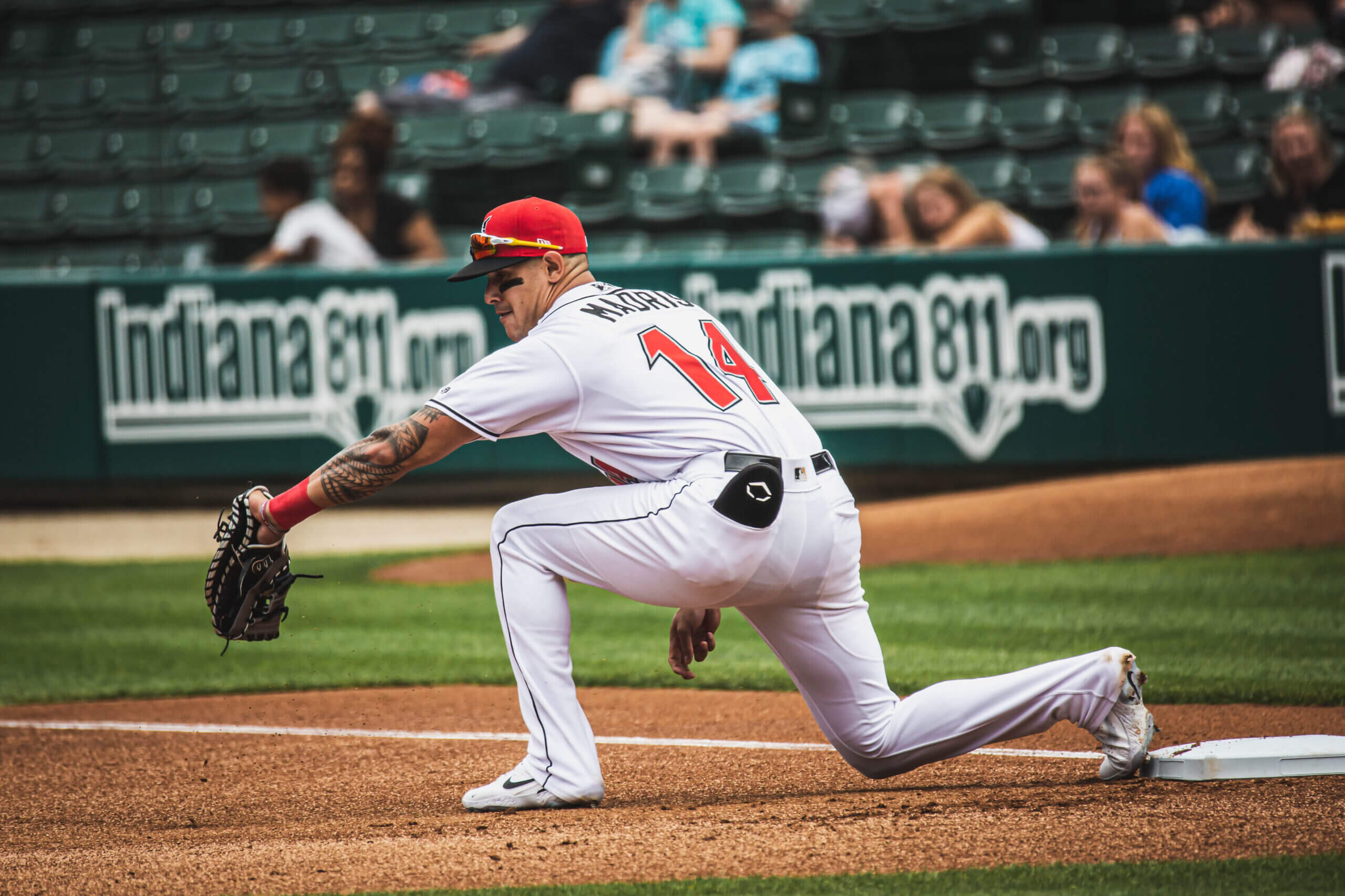 Bligh Madris made 10 starts at first base this season at Triple A. (Ryan Lane / Indianapolis Indians)

When Madris was called up from Indy one week ago, he was told to stash a first baseman’s mitt in his travel bag.

Madris played a little first base at Colorado Mesa University, but he was drafted in 2017 as an outfielder. He had never played any other position in the minors until this year, when he started 10 games at first base with Indy. Five of those starts happened right before he was called up.

“Just learning the position all over again, a higher level game,” Madris said. “It speeds up at this level, so I’m putting in work every day. Rusty, but we’ll get it back.”

During pregame workouts the past two days, Madris focused on his footwork and taking throws from the outfield.

“It’s making sure he’s in the right spots in those situations,” Shelton said. “There’ll probably be some stuff that’s really good and there will be times when we have to talk about things and teach.”

Madris is still breaking in his new first baseman’s mitt, the same model he used in college. The leather is gradually getting softer and more pliable — a process that’ll be hastened as Madris continues to snag rocket throws from shortstop Oneil Cruz.

“I don’t think there is anything that simulates a throw from Oneil,” Madris said with a laugh. “He’s 100 mph across the diamond. I had a couple of games with him over there (in Triple A), so I know what it’s like.”

Boston’s first-round pick in 2014, Chavis was drafted as a shortstop but was developed at second and third base. He began playing first base as a backup position in 2019 when he made his big-league debut.

“My favorite position is second base because it keeps me a little bit more engaged and I feel more athletic,” Chavis said. “I wish I was out there (at second) more often, but I’m happy just to be on the field.”

At 5-foot-10, 190 pounds, Chavis doesn’t fit the template of a hulking, power-hitting first baseman. He’s a small target for the 6-7 Cruz. Yet Chavis has good hands and has made several acrobatic plays at the bag. His is fourth on the team with 10 homers and is tied for second with 32 RBIs.

“I think first base is still considered kind of a ‘big guy’ position,” Chavis said. “Hopefully, I can change the mold with the way that I’m playing over there. Size might be relevant in regards to jumping (for throws), but that doesn’t happen too often. If you can provide power and offense, that’s the biggest thing for that position.