During two years of disruption to fixtures through COVID-19, many clubs praised the loyalty of their supporters and acknowledged their importance to the match-day experience while stands were empty.

In turn, many supporters donated their pro-rata refunds for matches behind closed doors to clubs’ charity foundations during lockdown.

All those words about how vital fans are to their clubs, however, do not appear to be backed by meaningful action when it comes to those same supporters looking to renew or purchase season tickets for the 2022-23 Premier League season.

With the strain on household budgets increasing, 11 of the Premier League’s 20 clubs have raised their prices.

Many of the rises are modest (less than five per cent) and come after a period of intense financial pressure owing to the pandemic when season ticket prices were frozen and match-day income fell off a cliff.

And support is as high as ever: there are only six sides in the top flight who do not have a waiting list for season tickets.

Research by The Athletic shows:

Here, we take a look at the price of general admission, non-premium tickets across the league and all the perks that come with purchasing a season ticket for a Premier League club.

*Newcastle United and Chelsea have yet to release 2022-23 prices so last season’s figures have been used.

Which clubs have increased their prices? 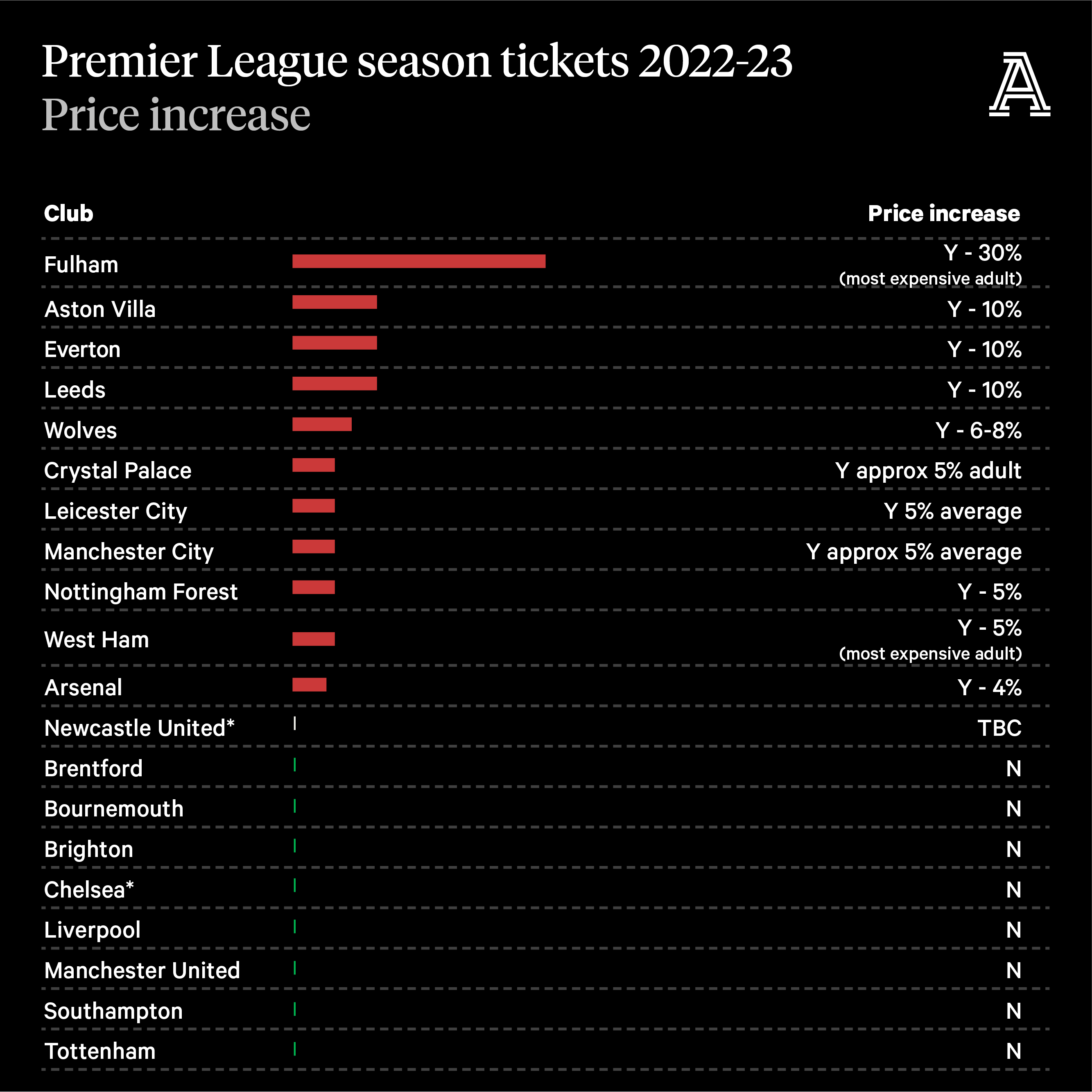 Many of these clubs make a point of noting that they have had price freezes for several years and that any increases are modest.

At Wolves, seniors (over 65) have seen an increase of around 20 per cent in the cost of their ticket.

Fulham are an outlier. Their rise of 30 per cent for the most expensive adult ticket — in the rebuilt Riverside stand — is significantly greater than any other club. In some of the corners, the price has increased from £299 to £1,000. The club has still sold out of season tickets at Craven Cottage for their first season back in the Premier League.

Who is charging the most? 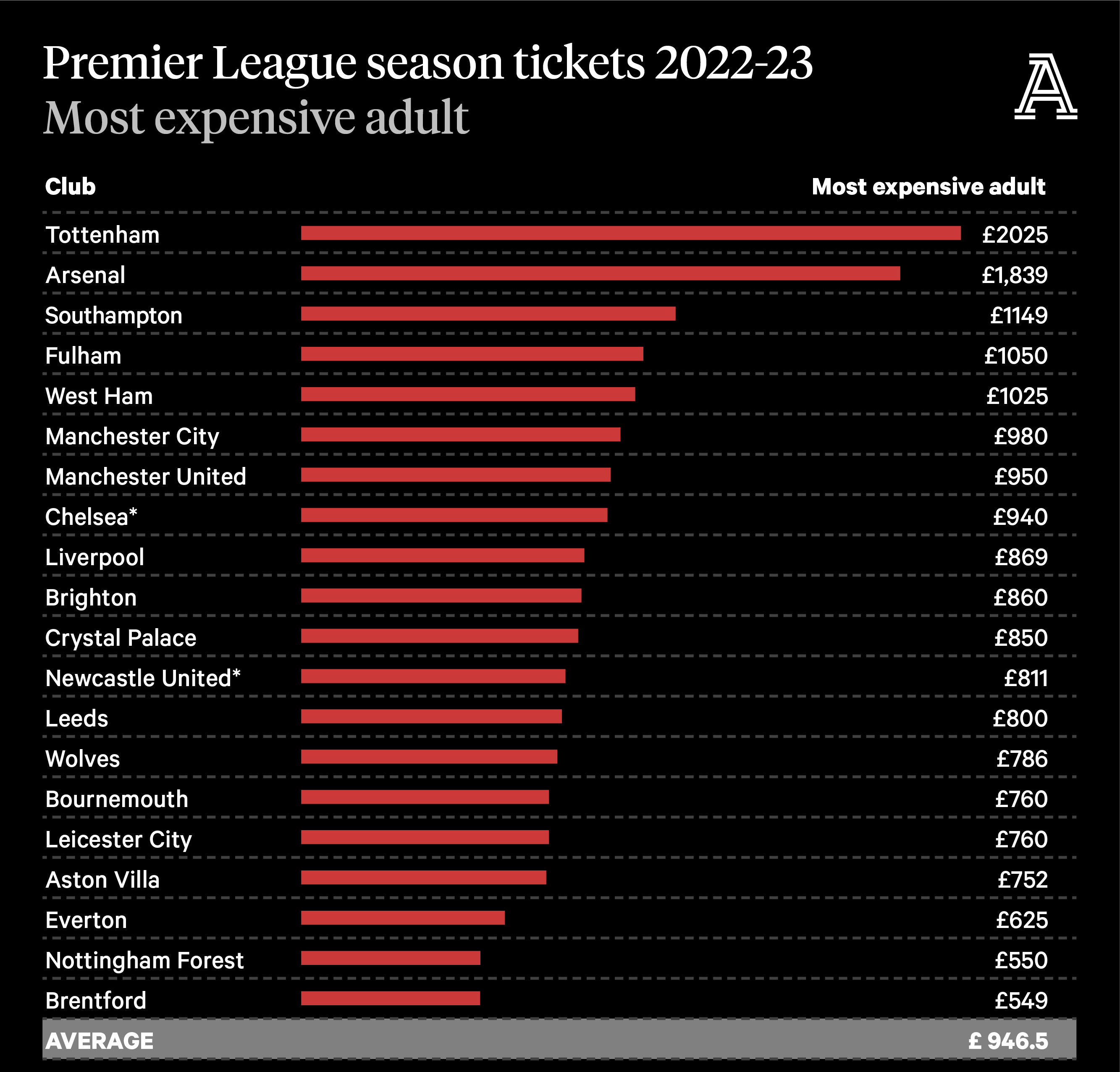 The highest general admission tickets can be found in north London, with Tottenham’s most expensive adult ticket coming in at £2,025 and Arsenal close behind at £1,839. Their cheapest tickets, at £807 and £926.50 respectively, are more expensive than any other clubs, too.

Which clubs are charging the lowest prices?

This is Brentford, with a maximum price of £549, while play-off winners Nottingham Forest charge no more than £550. Everton are third, with their priciest ticket coming in at £625. 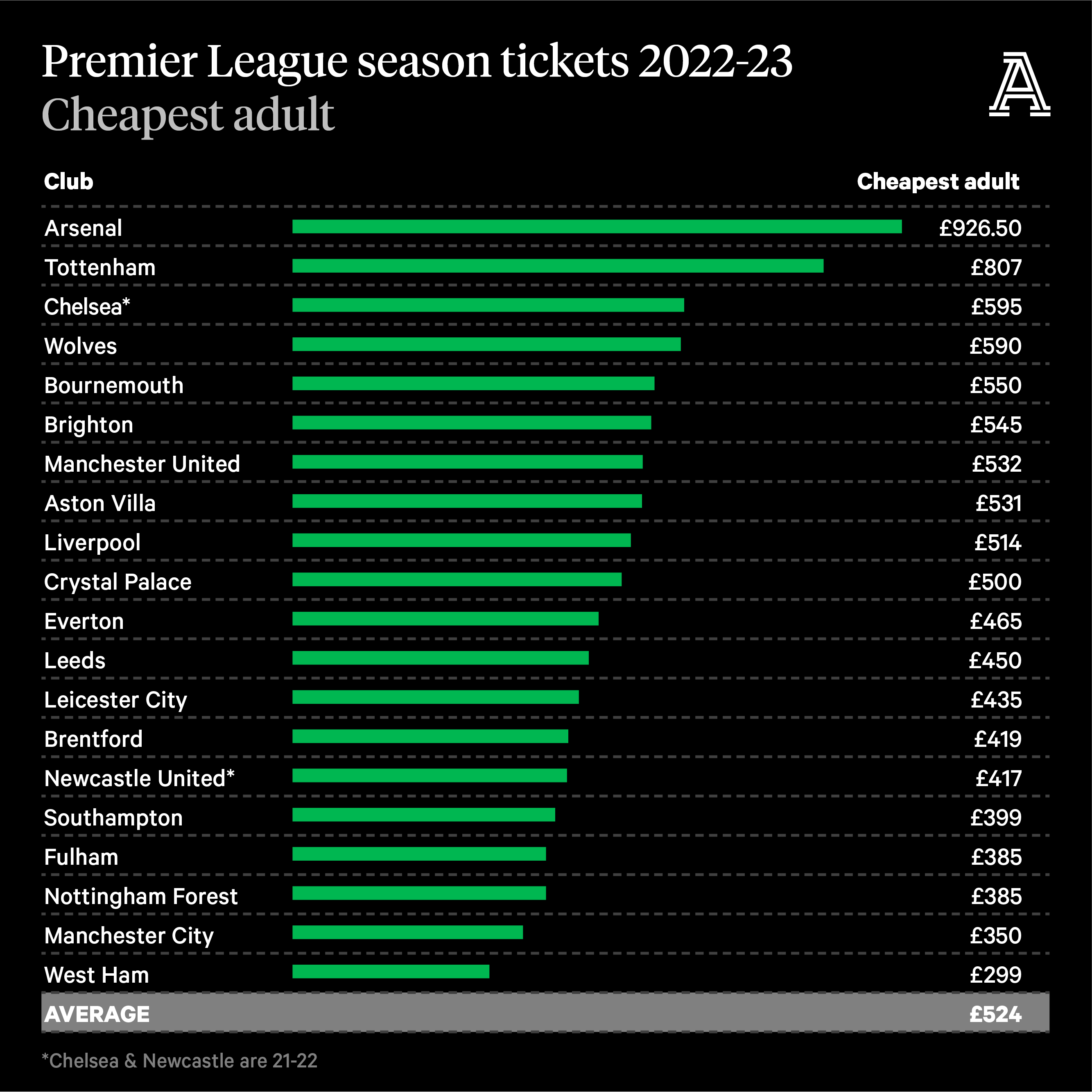 Most clubs have excess demand for tickets compared to their stadium capacity. Palace, Leicester (with a £10 admin fee to join), Liverpool, Tottenham and West Ham all have waiting lists — with some of these self-imposed to make the most of casual ticket sales.

Arsenal say they have a waiting list of between five and 10 years, Aston Villa have around 23,000 people waiting, Wolves more than 10,000. Manchester United say their waiting list is more than 100,000 and only open to members. Leeds have more than 20,000 waiting and also charge a £10 admin fee to join.

Everton say their list has grown to 25,000 in three seasons. There are two tiers and those in second tier can boost their position (moving into tier one) by purchasing an official membership.

Newcastle are expected to have a waiting list when tickets are made available.

At Wolves, you must be a member, which costs £38, to be on the waiting list and the same applies at Leicester, who don’t charge a fee.

Tottenham supporters must purchase a One Hotspur+ membership to be assigned a place on the waiting list, which stand at over 80,000. Adult prices start from £48.

Are there any unique offerings and what are the perks?

They are available to supporters who purchased a season ticket in 2021-22, with limited availability.

The most expensive adult ticket is £565, with the cheapest £205. A “value gold” option guarantees a seat for £299, but the club allocates the seat after the renewal period has ended.

Palace have introduced a “Season Ticket+” option. This costs an extra £50 but allows you to transfer or resell your ticket to selected members, comes with a free junior shirt (if you upgrade on a junior ticket), access to Palace TV (worth £32.99 a season) and other minor benefits. 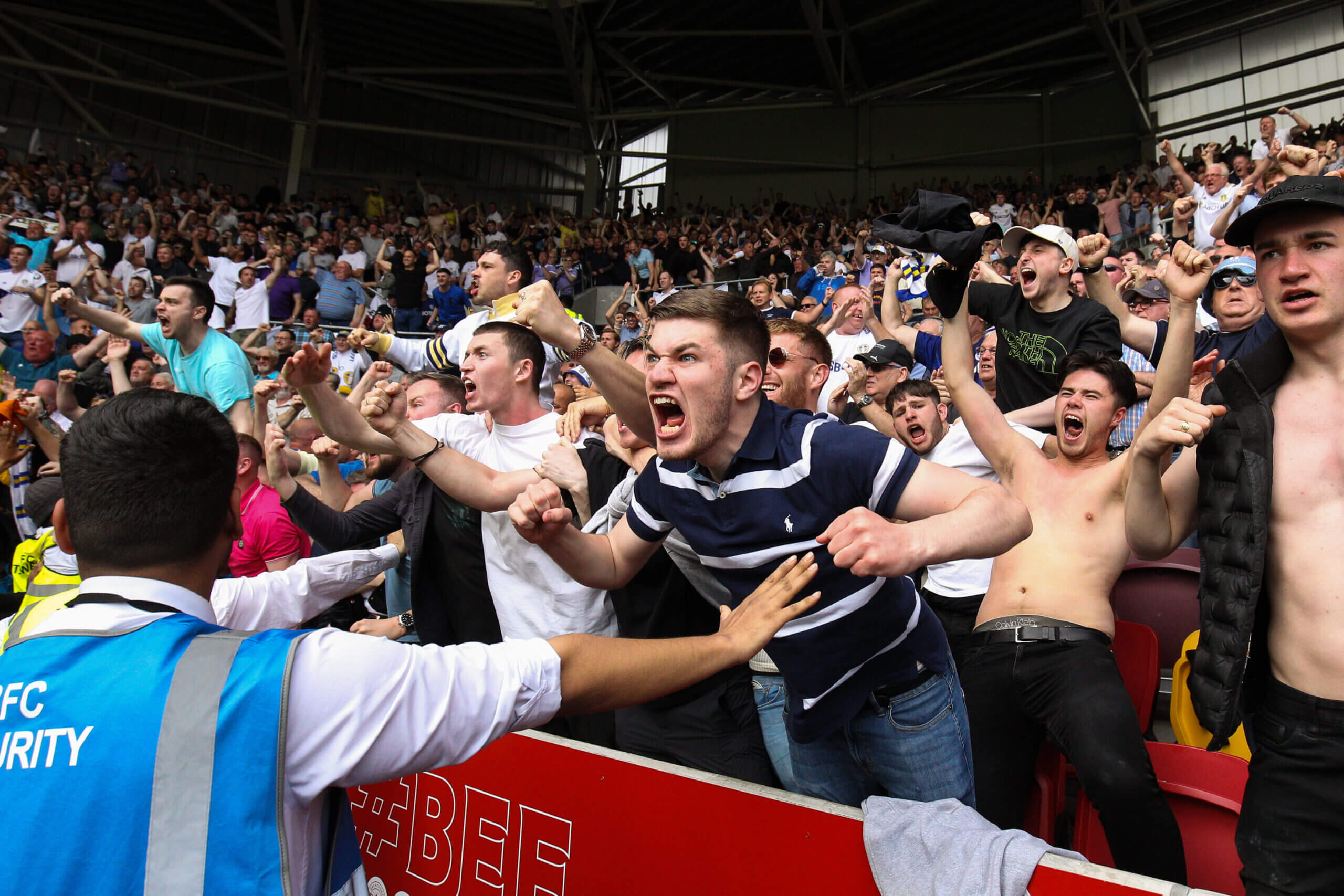 Chelsea’s new owners have scrapped the £2 ticket booking fee after consulting with fan advisors to the board.

Most clubs have some form of a loyalty scheme, where supporters are given the first refusal on away tickets depending on their points level, which is normally based on how many and what type of games they have attended.

Arsenal’s season tickets cover 26 matches with the first seven home matches in the Europa League and FA Cup included. Defeat in the third round of the FA Cup and no European football last season means credits have been applied to this year’s tickets.

Fulham supporters can opt into a home tie cup scheme in which they are automatically sent tickets for those fixtures. A similar scheme operates at Leicester.

Wolves provide free entry to home under-23s games and supporters can resell individual home match tickets for 80 per cent of the ticket’s value.

At Southampton, a reduced price window is available for season ticket holders wishing to attend cup games, subject to agreement from the opposition, making it cheaper than for casual supporters.

Manchester City offer three cup schemes: priority for the finals of domestic and European competitions, a guaranteed price cap of £25 for all domestic cup home games up to but not including the quarter-finals, and 300 ticket points for joining all three schemes (600 for “Platinum” ticket holders).

Manchester United allow fans to opt into competitions when purchasing their season ticket, or buying a Premier League-only ticket.

Tottenham supporters can opt into the “Automatic Cup Ticket Scheme”, which guarantees a ticket for all home cup competitions for domestic and European fixtures. They are charged for every home cup tie and those who have opted in are committed to purchasing a ticket, although this can be transferred to friends and family.

Most clubs give first refusal on cup tickets to season ticket holders.

Can I pay by direct debit or through a finance option?

Every club is offering this facility. Several use a third-party company — V12 Retail Finance — to provide it.

West Ham’s arrangement with V12 involves an administration fee of between £23 and £34, Tottenham’s is 8.6 per cent APR, Nottingham Forest charge 16.74 per cent APR, Liverpool 9.21 per cent APR and Arsenal between 2.95 per cent and 3.95 per cent interest.

Chelsea have not released their season ticket details yet, but last season used V12 with a 3.75 per cent admin fee. Aston Villa’s arrangement does not involve any fee. Everton’s is 10.3 per cent APR through Premium Credit Ltd.

Wolves no longer charge a fee of £20 for paying by direct debit and have increased the repayment period from six to nine months.

A Football Supporters’ Association spokesperson told The Athletic: “It’s understandable that clubs want to recoup finance admin fees but that should never become an excuse for profiteering — costs must be affordable for supporters.”

What about a season card? Or will I be forced to go digital?

Last season, guidance was issued stating that clubs were being “encouraged” to move to a “digital-first” ticketing platform. This policy of using near-field communication (NFC) tickets encountered teething problems in the opening weeks of the season in particular, with large queues outside Selhurst Park, the London Stadium, Anfield, St Mary’s and Turf Moor.

West Ham, Manchester United, Manchester City, Liverpool, Leeds, Brighton and Palace no longer offer physical cards by default. For those who do not have access to a smartphone, alternatives are provided if supporters contact clubs directly. At Palace, seniors are offered the choice of a card or a digital ticket to download to their e-wallet.

“The Premier League has also reassured us that its clubs will still offer options for supporters who are not able to use digital tickets or don’t have access to mobile devices,” said an FSA spokesperson.

“If you’re a supporter in that situation then your club’s supporter liaison officer will help.”