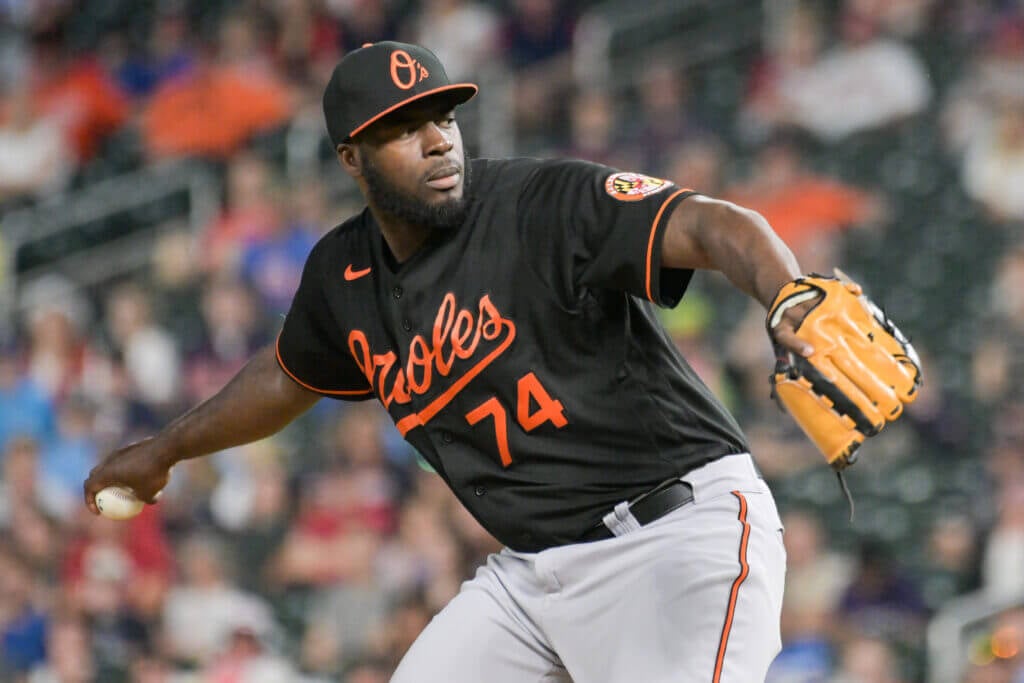 It’s difficult to imagine how someone so large with such an electric arm could slip the through the baseball cracks. That a guy referred to as “The Mountain” by team broadcasters went unnoticed for years.

Signed as a 6-foot-5, 180-pound, 17-year-old by the Miami Marlins out of the Dominican Republic in 2012, Félix Bautista was released roughly two years later. He spent 19 months out of pro baseball before the Orioles signed him in August 2016.

A year later, he hit 100 mph with his fastball for the first time.

The 27-year-old is routinely lighting up the radar gun for the Orioles while also mystifying hitters with a devastating splitter-slider combo. In his first 42 innings as a big leaguer, he’s allowed 23 hits and 13 walks while striking out 55 batters.

That’s about as filthy a splitter as you’ll see. pic.twitter.com/e2wdI3u267

With a 1.50 ERA and three saves in 44 games, he’s become an essential, late-inning member of the Orioles’ surprising bullpen.

But who is Bautista? What made him keep going when things were bleak? And what has this rookie season been like for him?

With the help of Orioles interpreter Brandon Quinones, Bautista sat down with The Athletic for a Q&A.

OK, let’s get this out of the way first. You are listed in media guides and baseball websites as 6-5, 180. When was that measurement taken?

And no one ever changed it?

What are you now?

When did you really hit your growth spurt?

It was little by little, progressive growth. But from age 20 to 23 it was big, like “boom,” a big jump there.

You originally signed with the Marlins and then were released after two seasons. When went wrong there for you?

I don’t know. I feel like I have always given 100 percent. Maybe to them it wasn’t enough. And they ultimately released me and gave me my liberty to be a free agent.

There was roughly a 19-month gap where you weren’t playing professionally. What was it like to be in that situation and how did you bridge that gap until you signed with the Orioles?

During that time, I just tried to keep my head up. Continued to give maximum effort in my training and the way I conducted myself and just stayed ready for the next opportunity. I kept training and kept working hard and, thankfully, the Orioles came about, and they gave me the opportunity to be part of their organization. And, thankfully, I’m here now.

Were there other teams that were interested in signing you during that period?

You’ve said your mother was crucial during the down times in keeping you positive and focused on your baseball goal. How important was that for you to have that support?

Those first couple days were rough when the Marlins let me go. In some ways, it felt like my dreams were crushed. But my mom, she continued to support me and be there for me and keep motivating me to continue working hard and keep training and be the best version of myself. Ultimately, that’s the biggest reason I never gave up on my baseball dreams.

You make your debut on April 10, you get your first strikeout and it’s against Tampa Bay phenom Wander Franco. And then you tell us afterward that it was your mom’s birthday. What was all of that like?

It’s something I’ll never forget for the rest of my life. I was so excited. It was a very emotional day for me. I really wanted my mom to be able to watch me during my debut. And thankfully, her and a few family members back home were able to do that. And so I was just really happy that I was able to debut and get that first strikeout and give her that birthday gift. That was really nice.

Have you been able to present her with the baseball that you saved from the strikeout yet?

No. It’s still here in my locker. Haven’t had a chance to give it to her.

Are there any plans for her to come from the Dominican to see you pitch in person?

We talk pretty much daily. We talk a lot and that is something that is in the works, bring her over. So, maybe toward the end of the season or hopefully by the start of next season.

I was told you have a son in the Dominican. What can you tell me about him?

Yeah, my son Xander is 2 years old, he’s back in the D.R. And, thankfully, he also gets to watch me play (on television) and perform. And whenever he watches me pitch, he says, “Papi, Papi.” So, he gets very excited, too, to watch me play.

Is your family able to watch most of your games?

Yeah, always. They watch all the games.

You are a bit of surprise to the media that covers this team. You went from having some success in the minors to being added to the 40-man roster to becoming one of the better relievers in the American League in less than a year. Is this a surprise for you, too, given your slow grind in the minors originally?

In some ways, yes. But at the same time, I’ve always known what I’m capable of. So, it was just a matter of waiting for the opportunity to showcase that.

Do you remember the first time you hit 100 mph with your fastball in a game?

It was quite the emotion. It was only one pitch that hit 100, so I was very excited about that.

Has it just become routine for you now? Do you think about hitting 100 now since it has happened so regularly?

It still is special to hit 100, but now I can throw it with more frequency.

OK, your pitching coaches would yell at me here, but have you ever tried to throw as hard as you can just to see what it would be? And, if so, how fast could you throw?

(Laughs) So, I haven’t tried to do anything too risky like that, just because I don’t know if it is super dangerous, and I don’t want to get hurt or anything like that. But every now and then I turn it up a few notches and I hit 102. That’s been the fastest I’ve been recorded.

I hear you’re a pretty competitive gamer. Is that a way you unwind and what else do you do for relaxation?

Yes, I do like playing video games. I like playing baseball video games and racing games a lot. So that’s very fun for me. Other than that, I like to chill and relax. I like going for walks, just checking out some parks and going for strolls. I really enjoy that.

You aren’t tough to pick out of a crowd. Have you been recognized by fans while strolling around Baltimore? What do they say?

Yes. Yes. They wish me good luck. They tell me I’m doing a really good job and, obviously, they ask me for autographs, as well.

I’ve been told you are a huge music fan. What kind of music do you enjoy?

I really like music. I try to listen to it all the time. I like Latin music a lot, whether it’s reggaeton, dembow, salsa, bachata, whatever it is. I like English music, too.

Do you play any instruments or sing?

Not really, but every now and then I play the congas (or bongos). Back home, I used to play that at church a little bit.

Who on this team have you become particularly close with, have dinner with on the road and such?

Here we are all pretty close, but when it’s time to go home, we all kind of go our individual ways and spend time on our own. But the one person I spend the most time with is Yogi (Joel Polanco), our bullpen catcher.

OK, you’re a big man and I imagine with a big appetite. What’s your go-to restaurant or meal?

Whenever we go into a new city, or if I’m ever looking for food, the first place I look for is Chipotle.

Can you do some damage at Chipotle?

Said Quinones: “From personal experience, yes. I’ve been with him a few times there, and he can definitely do damage.”

What do you order at Chipotle?

Pile it all on?

In summary, what has this season been like for you, finally making the big leagues and going from an unknown commodity to one of the more imposing late-inning relievers in the American League?

It’s been very emotional and very exciting for me overall. I kept telling myself, whenever I get that next opportunity to prove myself, that I was just gonna give 100 percent and not make anyone regret it. Just be the best version of myself.