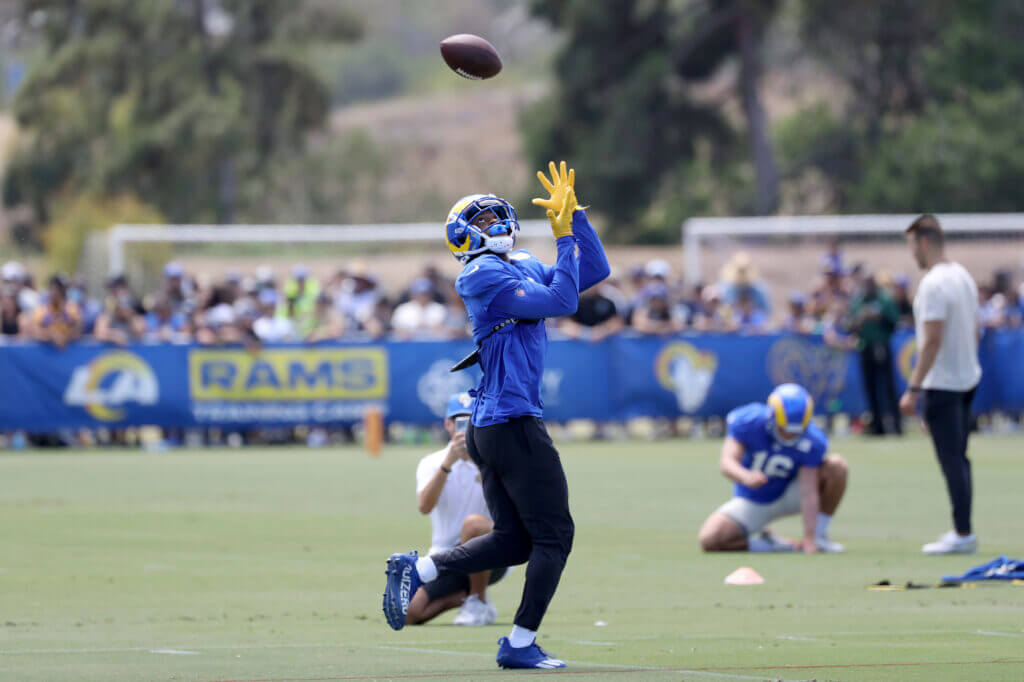 IRVINE, Calif. — As the Rams de-escalated from consecutive padded practices to a much lighter “de-load” day on Sunday, all eyes were on the small cluster of wide receivers working on the far field with the first-team offense.

Absent was third-year receiver Van Jefferson, who had 802 yards and 50 catches last season as the Rams’ clear-cut No. 3 (behind Cooper Kupp and Robert Woods, and then Odell Beckham Jr. in Woods’ absence). Jefferson also missed Saturday’s practice as he deals with a situation — the nature of which head coach Sean McVay declined to specify. Multiple sources told The Athletic that Jefferson’s absence is injury-related.

NFL Network insider Ian Rapoport said Sunday morning that Jefferson would seek more consultation about “a knee injury that has been plaguing him” on Monday, which will include an assessment about whether he will need surgery. It’s unclear whether the injury is on the same leg that Jefferson injured (and played through) in the postseason (and McVay declined to specify on Saturday), but Jefferson did confirm as camp opened that he had surgery in the spring to fix it.

While second-year receiver Ben Skowronek has shifted into a larger share of the snaps in team periods and installation work, the Rams won’t know what a longer-term plan of action will be until they know more about Jefferson’s status.

McVay didn’t have a press conference Sunday, but is scheduled to be available Monday — the same day Jefferson may have more clarity on his next steps.

Saturday, because their practice was filmed by NFL Network cameras, the Rams didn’t show much depth of scheme or variety of personnel (although they were in pads for the second day in a row). Sunday, they de-loaded — which means the day was about mental work and installation, and none of the quarterbacks threw. Despite a workload that was kept more surface-level by design, there was still much to observe through the weekend.

A reminder: The Rams often structure their live periods to run the second team against the first team on each side of the ball. First-team versus first-team periods will be specified in reports. Media members cannot report on schemes or the depth chart unless addressing it directly with a coach/player in an interview, but otherwise the full practice is open to credentialed viewers.

• Receiver Allen Robinson put together a really nice workout on Saturday. Robinson’s best catch was a contested effort across the back of the end zone, when the Rams were working first-team against first-team in a live red zone period. Stafford said later that Robinson was his third or even fourth read in the progression, and that he looked off a defensive player in order to split open just enough room to fit the pass to Robinson as he sped across traffic in the end zone. The buzz currently swirling around Robinson is real (especially as non-daily media visit camp and watch him practice for the first time), and there’s absolutely substance behind it. He’s made quite an impact on teammates and coaches in a short time.

• Cam Akers and Darrell Henderson, the Rams’ two most veteran running backs, are splitting first-team snaps pretty evenly so far. It’s tough to tell without real contact how they will fare when the season begins, but so far both look explosive and healthy. They’re also clearly going to be a factor in the passing game.

“I look at it as we’ve got two starting backs,” said McVay. “Those guys are great complements (to) one another, but I see them as both starting-caliber players. We need to get them involved. They need to be on the field. I think it’s healthy for them to be able to supplement one another.”

The issue in the past, of course, has been both players’ availability. Henderson has suffered a variety of injuries over the past few years while Akers returned in-season from an Achilles tear suffered before camp last summer. I’ll note a personal observation, however — Akers appears to have bulked up a bit in a positive way, which should bode well for his ability to keep ahold of the ball through contact and makes him a more dangerous player as a whole.

• Aaron Donald basically lived in the backfield during some of Saturday’s team period run plays, however, and at one point McVay and defensive coordinator Raheem Morris spelled him before executing a consecutive run play — McVay has joked in the past about giving Donald reps off so that the offensive linemen can actually install their concepts without the stress of him bearing down on them. It’s unclear if that’s exactly what happened in this specific scenario, but I personally think those jokes have a note of truth to them.

• Saturday, cornerback Robert Rochell tracked down and intercepted a John Wolford pass intended for Jacob Harris, who appeared to get re-directed after some contact on his route and fell. Morris specifically praised Rochell’s development into his second season in his press conference on Sunday.

• Receiver Brandon Powell’s command of the return position is palpable during special teams installation periods at the beginning of practices through the first week of camp. Powell, who joined the Rams mid-season last year and acted as an ignitor for their embattled special teams unit, returned to the team this spring on a one-year deal. However, it’s likely that the Rams want whoever their return specialist is to also contribute on offense, even if they’d only be called upon to do so in an emergency. It’s notable that Powell, who has been repping first in return drills ahead of second-year receiver Tutu Atwell, spent a lot of time with Atwell and offensive assistant Greg Olson on the field where the first and second-team offenses were installing on Sunday.

• Rookie outside linebacker Daniel Hardy’s longer frame also stands out on special teams (relative to the rest of that unit), where coaches hope his speed and size combination will help him contribute early on. Hardy’s family was present at camp on Sunday and very vocally delighted to see him out on the field…even for something as low-glamor as a special teams install. Moments like that are what training camp is all about.

• There was a ton of crowd love for inside linebacker Bobby Wagner on Saturday, as the position group underwent ball tracking and movement drills on the sideline of the “near” field (the field closest to the players’ locker room) and in front of the bleachers on that side. Every time Wagner moved toward the sideline, the crowd swelled through the end of his rep. Each time he got back in line, he directed a small bow with clasped hands toward the direction of the crowd as a “thank you”.

Ernest Jones calls working with Bobby Wagner “the highlight of my career so far.” Adds,

Rams DL coach Eric Henderson asked his guys to wear bright gloves today because when they do film study the coaches and players can better track the finer details of their hand placement in drills and beyond. Small detail, possibly big impact. pic.twitter.com/YXXH6Da4oI

• Reserve running back Raymond Calais is also getting some work at kick and punt return.

• Also during special teams install: Rookie punter Cameron Dicker, who is “competing” with veteran Riley Dixon for the job, demonstrated his ability to handle kickoffs as well. Meanwhile, Dixon seemed to have no problem holding kicks in live field goal periods.

The Tempest review – the bard in budgie smugglers