Rangers recorded their lowest expected goals (xG) in an individual game for seven years as they lost 2-0 to Royale Union Saint-Gilloise in their Champions League third qualifying round first leg.

With an xG of just 0.17, it was clear the failure to score was not down to profligacy in front of goal, but due to barely creating a chance over the 90 minutes despite having more than 65 per cent of the ball.

How concerned should Rangers fans be as they prepare to return to Ibrox on Saturday for the first home game of the season against Kilmarnock? It is only two games in. Teams can have a slow start like they did against Livingston, or an off night as they did on Tuesday.

The dip in league form last season under Giovanni van Bronckhorst that cost them the title — they dropped 14 points in the first 12 games after the winter break — was often due to a failure to convert chances and the opposition taking theirs at a greater rate than normal.

It is the perfect storm for bad results but if the performance level remains high and the overall style is working, except for the final touch, then faith has to be put in that element of luck and human error balancing itself out over time.

Union’s success has been firmly based on their belief that the deeper numbers tell the true story.

“Football is such a week-to-week activity. You can get beat one week and everyone just collapses,” said their co-owner Alex Muzio.

“It’s amazing how much people react to results in football. I cannot tell you how insane it is. You can batter a team, miss two penalties, have someone sent off for nothing and be unbelievably good and people will still be devastated. And the opposite — you can be absolutely shit, play godawful and the winner goes in off someone’s arse and everyone’s bouncing up and down and you’re all geniuses.

“I know the result is important but I’m so, so much more bothered about how we play. First game of the season, if we obliterate an opponent and draw, I’ll be so much happier than if we play shit and win because the obliteration is so much more predictive of future success than the win.”

The 2-0 win for Union was reflective of them being the more dangerous and efficient side. For Rangers, it was an alarming display that has posed questions about what Van Bronckhorst is trying to achieve with his new-look attack.

It is early in the season and it may just take time to iron out these issues but several questions need to be addressed in the short term if they are to start looking more likely to score goals from open play.

Why can’t Antonio Colak get involved in the game? What is the purpose of Glen Kamara playing further forward? Is the right-wing position still a square peg in a round hole? Who is the player they are trying to get on the ball centrally, if at all?

The first topic is one that has divided supporters. Croatia forward Colak has barely had a kick in 180 minutes, making barely any passes against Livingston beyond the two he made from kick-offs.

Is that because of a lack of service or a failure to get involved? It has been both at different points. 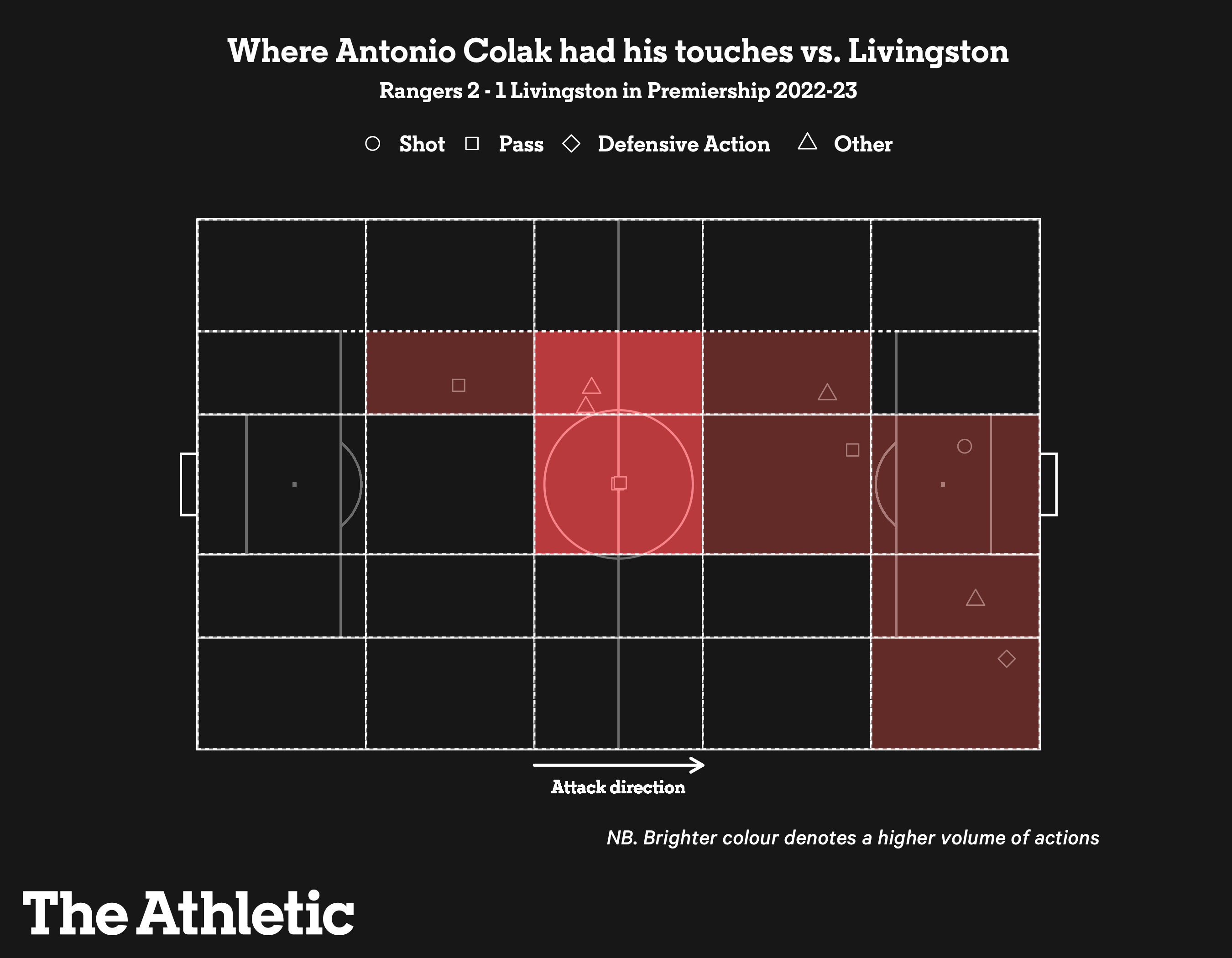 He is not a striker who feels it necessary to drop deep and link play. Indeed, it appears he is under instruction not to do that. But up against two teams that have set up in a compact shape with 10 men behind the ball, leading the line cannot simply constitute staying central and waiting for the ball.

There has got to be more variation to his game than that and too often, his movement has been absent unless he is expecting a delivery. There were two examples against Livingston when he was not proactive enough and it frustrated his team-mates. Connor Goldson had the ball and drove out of defence but as he slowed to look for a forward option, Livingston stepped up and easily played Colak offside.

James Tavernier then cut inside as he often does but, rather than find Alfredo Morelos making a sharp dart towards him to receive to his feet, Colak was on the shoulder of the far-side centre-back. It looks lazy on the eye but he is clearly a hard worker so it suggests it is more about him better understanding the preferences of his team-mates and tailoring his usual runs down the side to include more of an option to feet.

He was unlucky to have a legitimate goal chopped off against Livingston for offside as his run across the goal was clever. He should have done better with a header against Union from Malik Tillman’s inswinging cross.

His movement in the box does look intelligent but the area is so crowded that he has not been able to get a clean toe on several deliveries across the front post, a run he likes to make. Tavernier may look to deliver earlier if he is to find him.

The issues with Kamara, Rabbi Matondo and the absence of a functional midfield shape were linked on Tuesday. Ryan Jack was essentially an island as Rangers built possession.

They were playing a lop-sided shape with Borna Barisic higher on the left than Tavernier, which saw Tillman drop into narrow central positions and Matondo stay high on the right.

Kamara was rarely accessible as the No 10, though, and too often possession was jammed in the back line. As can be seen in the pass map below, there was too big a gap between Jack and the flat front four. The three midfielders were on top of each other and Colak, who did not register a pass until the 48th minute, was so uninvolved that the algorithm did not register him on the pitch. 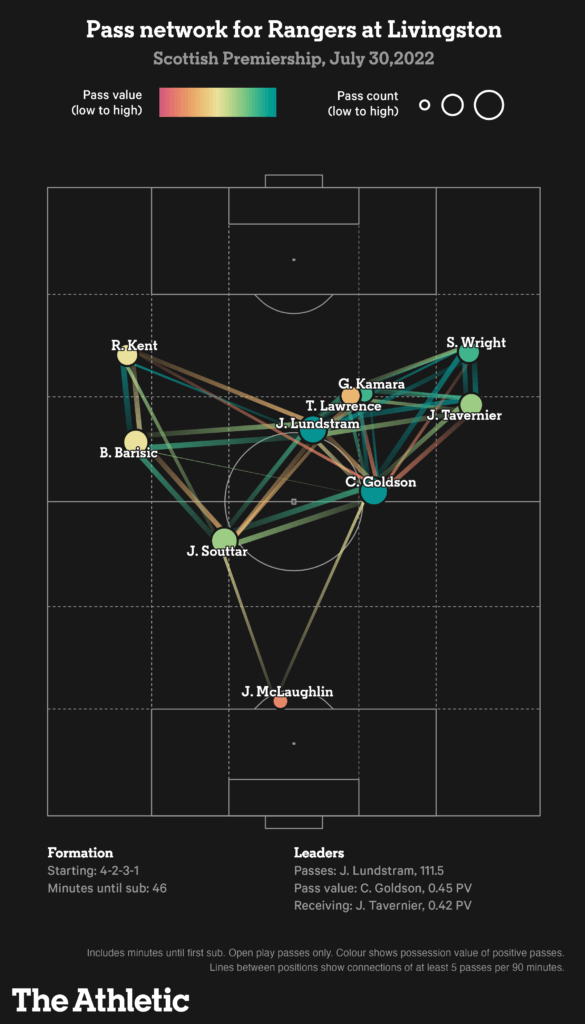 And when Tavernier had the ball, Matondo was not making intelligent enough runs to pose problems to Union.

The ploy was clearly for Matondo to attract the full-back towards him and for Kamara to break into the gap that it left. It was what Kamara had done to almost get in over the top against Livingston on the left on Saturday but Union were wise to it.

Matondo was the fastest player in the Belgian league at Cercle Bruges but he rarely looked to get in behind. He was too predictable to mark and when he did get it on the right, his ambitions to drive down the outside were too clearly projected, meaning he lost possession numerous times.

His natural position is to cut in off the left but that is the case for Ryan Kent and, to a lesser extent, Scott Wright. By using only right-footers, keeping them wide either blocks Tavernier’s space or, if used narrower, asks pacey dribblers to be link players.

That is not their natural game but it should be Kamara’s. However, in this set-up, he just doesn’t seem to have found a home. He doesn’t play quickly enough for Van Bronckhorst at the base of midfield but at No 10, he seems hesitant to use his ability to turn under pressure, as can be seen from his passes below. 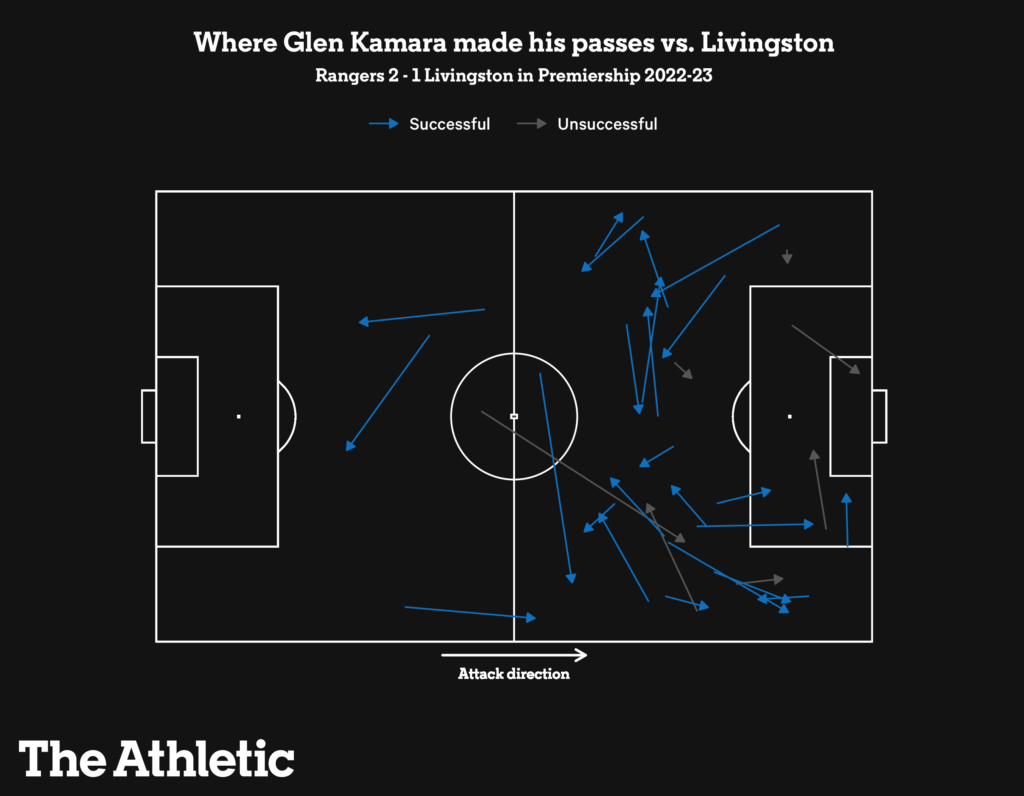 Rangers have three key positions to sort for what is a big week coming up. Playing the same way will only deliver the same numbers, and they cannot start to be a trend.