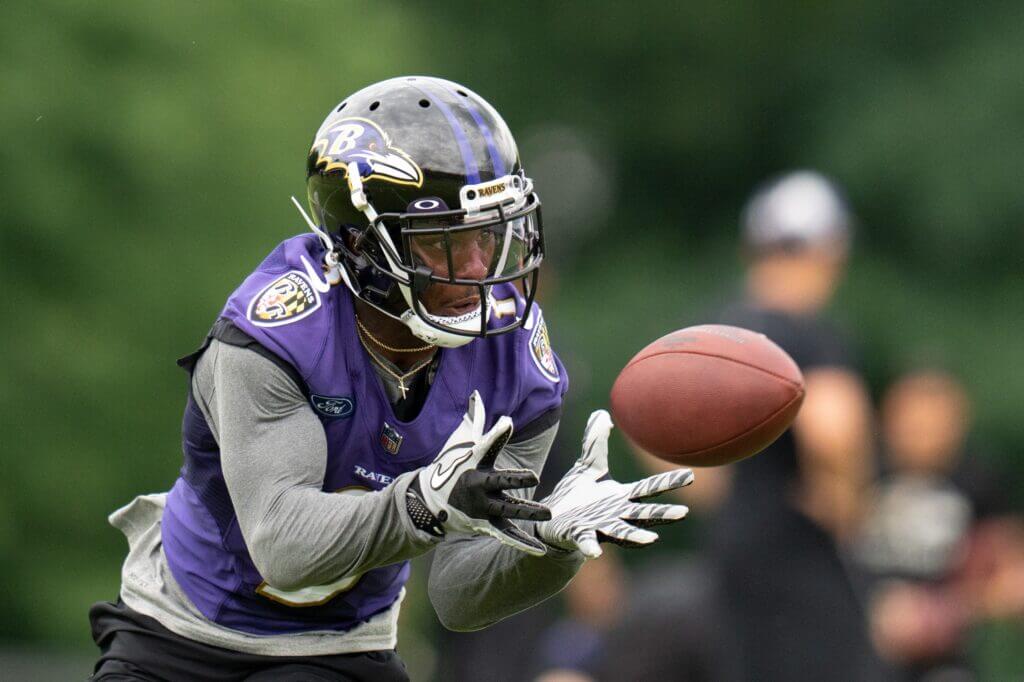 OWINGS MILLS, Md. – Third-year wide receiver James Proche’s consistent play in practice over the past week and a half has made him a popular topic of conversation early in Ravens training camp. Not that he would know.

“I’m not focused on any outside noise, or what any of you guys say,” Proche said after Friday’s practice. “Nobody really knows what they’re talking about. Nobody knows what’s going on. It’s hearsay. Everybody wants an opinion. You can talk about whatever. We’re not paying attention to it.”

Proche set the screensaver on his phone to read, “Do your job.” So it probably shouldn’t have been surprising that when he was asked about what’s been different for him in his third NFL training camp, his response was: “Nothing. Just doing my job.”

Proche has made a few plays in just about every practice. Some have been on deep passes, like the 65-yard touchdown he caught from Lamar Jackson on Thursday. Some have been in the red zone. He’s worked pretty much every area of the field, and his precise route running has made him a nightmare to deal with for Ravens defensive backs in one-on-one drills.

The 2020 sixth-round pick out of Southern Methodist had a very good training camp last year. However, his performance this summer has to be reassuring for a Ravens team that traded arguably its best receiver, Marquise Brown, and never replaced him in the draft or free agency.

Team officials have wanted to give the team’s young receivers every opportunity to seize significant roles on offense. While Devin Duvernay has been sidelined for nearly a week with a thigh contusion and Tylan Wallace has had a quiet start to training camp, Proche continues to make plays. He’s the first player on the field for practice and one of the last to leave. In between, only All-Pro tight end Mark Andrews is catching more footballs for the Ravens.

“He’s doing excellent,” Ravens wide receiver coach Tee Martin said of Proche. “He had a really good camp last season, and I think he’s doing even better this year. He’s taking the next step. Another year of experience, he played a little more in games last year, and he understands the opportunity in front of him. He’s attacking it every day. He’s asking a lot of great questions. He’s playing three positions for us and playing lights out. I look forward to seeing him play next week (in the preseason opener), as well.”

Proche, 25, got limited opportunities last season, playing in 14 games but getting targeted just 20 times. He caught 16 balls for 202 yards. Twelve of Proche’s 16 catches came in two games: a Week 4 victory over the Broncos and a Week 16 loss to the Bengals. Martin said Proche was caught in a numbers game last year behind the likes of Brown, Sammy Watkins and Rashod Bateman. Proche was a healthy scratch for a couple of games.

If he’s healthy, there is no reason why he won’t get significant opportunities this year, as he’s emerged as a leader of a young and unproven receiving group that believes it’s ready to make an impact.

“We have a lot of guys who want to be great for themselves and for the team,” Proche said. “It’s not a me thing. It’s everybody individually.”

Now on to observations from Friday’s practice, which Ravens coach John Harbaugh called the team’s “sharpest” of training camp.

• The Ravens took off the pads after two straight physical practices. It wasn’t as hot as it was on Thursday, but the temperature was over 90 degrees on the field. Harbaugh gave his players a brief break about an hour into practice.

• Rookie center Tyler Linderbaum, who went to the ground and grabbed his lower left leg about an hour into Thursday’s practice, had an MRI that didn’t reveal any major concerns. Harbaugh said the first-round pick will likely be sidelined for a week or two, which likely means that he won’t play in next Thursday’s preseason opener against the Titans.

The Ravens have three other centers on their roster in Patrick Mekari, Trystan Colon and Jimmy Murray, but Harbaugh didn’t rule out adding another with Linderbaum down.

• Friday’s list of non-participants also included Bateman (soft-tissue injury) and Duvernay, tight end Charlie Kolar (hernia), outside linebacker Vince Biegel (Achilles) and defensive back Brandon Stephens (soft-tissue injury). Harbaugh said Bateman’s injury is minor and he could have practiced Friday, but the coach wanted to be cautious with the team’s top receiver.

Bateman likely won’t practice Saturday, either, and the team is off Sunday. Harbaugh said that Duvernay, who has been sidelined all week, is just about ready to return, and Stephens isn’t too far away, either.

• First, the good for rookie fourth-round cornerback Damarion Williams: He intercepted a Tyler Huntley pass when the intended target, tight end Tony Poljan, fell down, and returned it for a touchdown. It was his second interception in three days. Now, the bad: Williams struggled in his two one-on-reps. Undrafted wide receiver Raleigh Webb pushed him down on his way to making a deep catch, and Proche easily juked Williams with a nifty move off the line of scrimmage.

The first one was essentially a stalemate, with Likely making a short catch on a play Hamilton contested and nearly intercepted. The second was won by Hamilton, who got physical with the tight end and knocked the ball away. The third was won by Likely, who got a step on the safety out of his break and made the catch. As they’ve done after previous matchups, the two bumped fists when the session was over.

He got it in Friday’s one-on-ones, and Andrews ran by Queen and caught a touchdown. Andrews then extended the ball toward Queen to remind his teammate of who won the matchup. With Bateman and Duvernay not practicing, Andrews was an even bigger part of the passing game than usual, and that’s saying something given the tight end’s already significant role. It seemed that Andrews was targeted on every third play, and he caught his fair share of balls.

• Much of the practice was spent doing goal line and red zone work. It was a decent start for both Jackson and Huntley, who were each 3 of 4 in the first full-team goal line drill. Jackson connected with Andrews twice and fellow tight end Nick Boyle once. Huntley hit tight end Josh Oliver and wide receivers Makai Polk and James Proche. Overall, though, the defense made it very tough on the offense and gave it very little room.

• Polk, who had 105 catches and 1,046 receiving yards for Mississippi State last year before signing with the Ravens as an undrafted free agent, has had a relatively quiet training camp. He was more active and noticeable Friday, making a tough touchdown catch while surrounded by Hamilton and Robert Jackson.

• Another of the undrafted free-agent receivers, Devon Williams has had an uneven start. He’s made a few circus catches, and then there are times like Friday, when he failed to convert on a golden opportunity. Williams, the Oregon product, rose over Kyle Fuller in the corner of the end zone, but Jackson’s pass clanked off his hands.

• It seems like once a practice, veteran defensive end Brent Urban blows up a play by getting penetration. It happened again Friday. Nose tackle Michael Pierce also shut down a jet sweep to Wallace by bursting through the line of scrimmage.

• Veteran outside linebacker Justin Houston was instrumental in the defense getting off the field in a two-minute drill, registering sacks on back-to-back plays.

• Safety Chuck Clark had a nice day and prevented one touchdown by getting his hands up to deflect a pass near the line of scrimmage.

• Proche has caught pretty much everything, but a Huntley pass near the end zone seemed to catch him by surprise. It hit the receiver in the helmet before he had a chance to extend his hands.

• The loudest the crowd got was probably when Jackson faked a handoff in a full-team period and exploited a sizable hole to register a big gain on the ground. Jackson doesn’t run much in camp practices, but the crowd always gets excited when he does take off. In that period, Jackson was 3-for-3, completing passes to Binjimen Victor, Andrews and Jaylon Moore.

• The team did a punt coverage drill early in Friday’s practice, but Likely made sure one rep never happened. Likely pancaked running back Corey Clement, who was supposed to sprint downfield and cover the kick. He instead never advanced past the line of scrimmage.

• Harbaugh gave his players a proposition with about 40 minutes left in practice. He said if Justin Tucker made the 47-yard field goal, he’d end practice early. Tucker, who just happens to be the most accurate kicker in NFL history, predictably delivered, setting off a modest celebration, which included a bear hug by Andrews. Practicing for two hours in intense heat, the players were probably too tired to celebrate too much.

Anyway, it was part of an eventful afternoon for Tucker, who got the crowd excited earlier by making two kicks from 65 yards. Tucker did miss a couple of attempts in Friday’s practice, including one from 49 yards. He’s always been at his best when the pressure is on, so it was no surprise when he made the one that came with an early practice dismissal on the line.