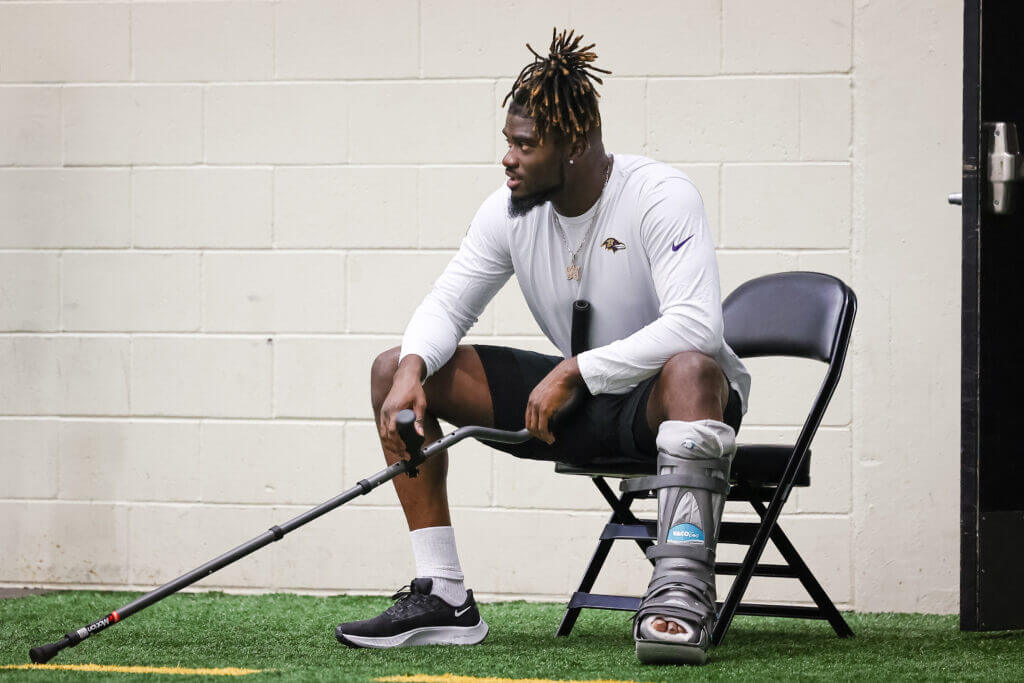 Ravens outside linebacker Tyus Bowser has spent plenty of time around the perimeter of the practice fields over the first two weeks of training camp, but he’s still yet to participate. Bowser continues to rehab the torn Achilles he sustained in January.

His rookie contract standoff with the Ravens now over, second-round outside linebacker David Ojabo watched much of Thursday’s practice from the sideline, even having a chat with head coach John Harbaugh during a stoppage in the workout. He, however, is weeks away from returning to the field after he tore his Achilles in March while participating in the Michigan pro day.

With some uncertainty about Bowser and Ojabo’s respective return timelines and obvious questions about how they’ll look when they do start practicing, the Ravens already were dealing with depth issues at outside linebacker. Then came Thursday’s practice and the visual of veteran linebacker Vince Biegel, who has been getting repetitions with the first-team defense throughout training camp, getting helped onto a cart with about 10 minutes left in the workout, unable to put any weight on his right foot.

Biegel tore his Achilles, Harbaugh confirmed after practice, when he “leaned” the wrong way in a two-on-two drills. It’s a crushing development for Biegel, who was having a strong start to camp but now appears likely to miss his second full season in three years. While a member of the Miami Dolphins, Biegel tore his Achilles during the Dolphins’ 2020 training camp and missed all of that season. He then played in only five games for Miami last year.

Biegel was hardly a roster lock, but with the way he was playing and his special teams experience, along with his relationship with first-year Ravens outside linebacker coach Rob Leonard from their time together in Miami, he was in a good position to make the 53-man roster.

“Vince was fighting to make the team, and I think he would’ve had a great chance to make it because he’s just a solid, tough, talented guy who does everything right as hard as he can,” Harbaugh said. “That’s where we’re at.”

“Linderbaum is going to be fine…. Vince Biegel did tear his Achilles.” pic.twitter.com/fyX7PPLLVl

With Biegel out, the Ravens only healthy outside linebackers are veterans Justin Houston and Steven Means, second-year pros Odafe Oweh and Daelin Hayes, and undrafted rookie free agents Jeremiah Moon and Chuck Wiley.

At the very least, the Ravens will need another outside linebacker to just absorb some practice reps and play in the preseason. They won’t want guys like Houston and Oweh playing much, if at all, during the preseason.

If they are truly worried about the group as a whole and how long it will take Bowser and Ojabo to return and contribute, they could look for much more than a training camp body. The Ravens hosted 12-year veteran Jason Pierre-Paul in June, but they were more doing their due medical diligence on a player who had battled a shoulder injury last year.

Pierre-Paul remains a free agent, and Biegel’s injury could spur the Ravens to revisit his status, or look to sign another accomplished veteran. The list of available outside linebackers include Everson Griffen, Trey Flowers, Carl Nassib and Takkarist McKinley.

• Biegel wasn’t the only player to go down in Thursday’s practice, the second consecutive in which the team was in pads. Second-year fullback Ben Mason exited practice alongside an athletic trainer with about 20 minutes remaining. The trainer was carrying Mason’s helmet. Harbaugh did not update Mason’s status.

• The Ravens also had a scare when first-round center Tyler Linderbaum went down to the ground grabbing his lower left leg during a running drill. Things got quiet as Linderbaum stayed down for a moment and then limped slowly to the back of the field. He spoke with members of the athletic training staff and then walked slowly to the facility, displaying a small limp. Afterward, Harbaugh said that Linderbaum will be “fine,” although he indicated that the team’s starting center will likely get an MRI to make sure. “It’s a physical drill there and he came up a little sore,” Harbaugh said. “They’ve looked at it, X-rayed it. They’ll do an MRI on it to make sure, but all indications are that it’s nothing serious at all.”

• Linderbaum’s early exit came a day after safety Kyle Hamilton, Baltimore’s other first-round rookie, left practice early because of cramps. Hamilton returned to the field Thursday and made it through the whole practice.

• With temperatures in the 90s, the heat index over 100 and players in pads for a second consecutive day, Harbaugh gave his team a 15-minute break about midway through practice. He said the decision was made after consultation with the team’s chief medical officer Andrew Tucker. Several players spent the time under the cooling tent between the fields. Others headed indoors. Harbaugh walked over to the bleachers and did an impromptu question-and-answer session with fans, where he was asked about Lamar Jackson’s contract status and Gus Edwards’ health and whether he’d get a fan Super Bowl tickets if the Ravens are playing in the game.

• The Ravens inside linebackers did coverage drills against running backs, and all eyes were on Patrick Queen, who has struggled in this area in his young career. The former first-round pick was a step behind Corey Clement on a wheel route and allowed Justice Hill to get inside him, but he rebounded to knock a pass away from Nate McCrary in his third rep. Other highlights of the drill included Hill getting away from Diego Fagot for a deep catch, Malik Harrison running stride-for-stride with Mike Davis to force a sideline incompletion and Kristian Welch knocking off Tyler Badie’s helmet with a hard jam.

• Jackson and the offense had a pretty good day, but only after enduring a slow and sloppy start. In his first full-team segment, Jackson went 1-for-3, rolling out and throwing the ball away on his first rep and bouncing a throw in front of Binjimen Victor on his third. In the next period, Queen burst through the line of scrimmage, pushed aside Hill and was in position for the sack. Three plays later, fullback Patrick Ricard grabbed Means around the shoulder to prevent him from getting a free run at Jackson. Right tackle Morgan Moses had a false start and was advised to run a lap by offensive line coach Joe D’Alessandris. The Ravens were called for an illegal man downfield, and then Oweh capped the defensive dominance in the period by blowing by Jaryd Jones-Smith for a sack of Tyler Huntley.

• Jackson later heated up, making his best throw of the day, a 65-yard touchdown strike to James Proche. Proche got behind safety Chuck Clark, and Jackson dropped the ball over his shoulder for the touchdown. Proche celebrated the touchdown with a flying chest bump with kicker Justin Tucker, who was watching the play behind the end zone. It was part of another strong practice for Proche, who also made a diving catch of a Jackson pass near a sideline of the end zone later in practice. When the referee extended his arms to signal that Proche had gotten both his feet in and scored, the wide receiver slapped his outstretched hand.

• Clement made the catch of the afternoon by snagging a Brett Hundley pass with one hand as he coasted up the sideline.

• The other offensive star was rookie fourth-round tight end Isaiah Likely. He scored a touchdown on consecutive plays in a seven-on-seven red zone drill. On the first one, he elevated over safety Geno Stone in the corner of the end zone and managed to make an acrobatic catch of a Hundley throw while keeping his feet in. Likely celebrated the score by patting the foam Guardian cap on his helmet. On the very next play, it was Jackson’s turn to hit Likely on nearly an identical play to the previous one. Fagot claimed Likely didn’t get his feet in and have control of the ball, and Likely told him that he did. The referees in the end zone agreed with Likely.

• Baltimore then did a full-team goal line drill, and the defense performed better and got some help from the offense. Hill had a drop, and Tylan Wallace also dropped a perfectly thrown ball by Jackson in the corner of the end zone. It’s been a frustrating start of camp for Wallace, who has made his share of catches but has just not been on the end of any big plays. He had an opportunity to make one Thursday, but the ball hit off his hands.