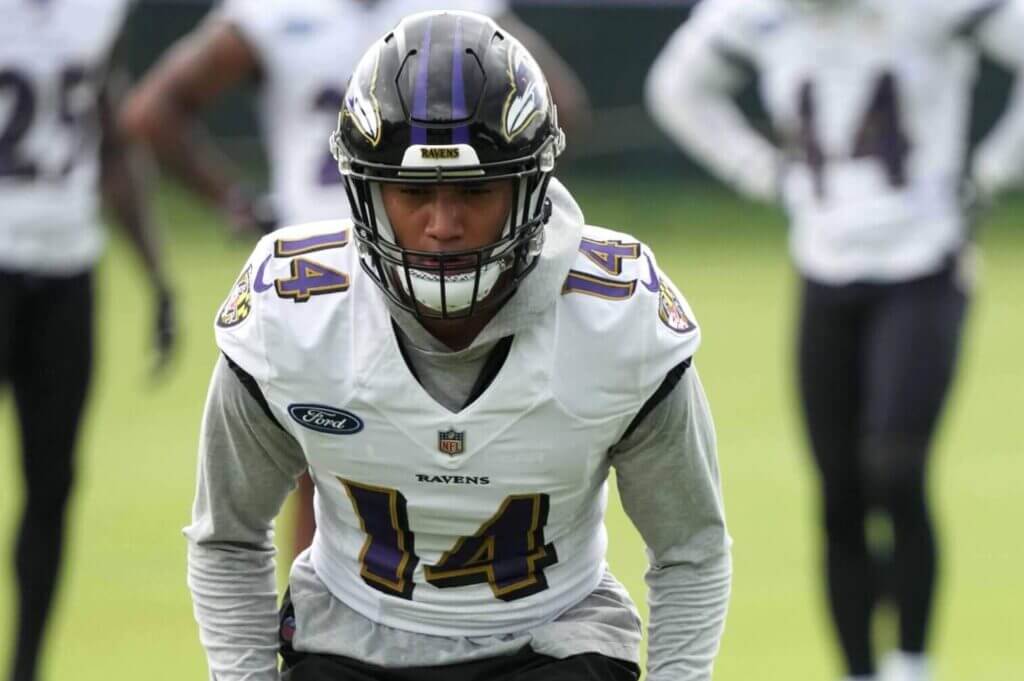 It was a challenging day all around for Ravens first-round safety Kyle Hamilton.

He was unable to prevent three completions to rookie tight end Isaiah Likely in one-on-one drills. In full-team work, he watched a Lamar Jackson pass sail right over his outstretched hand and land in the arms of tight end Mark Andrews, who sprinted down the field and into the end zone. A combination of the heat and potentially a physical issue seemed to be bothering him as Hamilton called for a substitution after a few different plays.

Then, after his best play of Wednesday’s practice, a diving pass breakup on a Jackson pass intended for a streaking Likely, the rookie safety struggled to get up. Hamilton ultimately hobbled to the sideline and stayed there for several minutes, getting looked at by members of the athletic training staff. He did a series of stretches while on his back.

Hamilton, determined to stay on the field, jogged back to join the defense for a seven-on-seven session. However, he lasted just one play and pulled up while tracking Tylan Wallace on a deep route. Wallace came over to check on Hamilton, who limped off the field. He stretched out his leg as if he was cramping and a few minutes later, he headed toward the training room, walking slowly up the hill and into the facility as members of the Ravens medical and athletic training staff trailed him.

Ravens first round pick Kyle Hamilton walked to locker room gingerly with about 20 mins left in practice. Hamilton stayed down after making a diving pass breakup. He returned to field for one plat, pulled up and then headed inside with trainers.

The Ravens had their longest workout of training camp Wednesday, practicing for roughly 2½ hours in over 90-degree temperatures. A number of players, including running back Nate McCrary, wide receiver Jaylon Moore and cornerback David Vereen, all hobbled off the field at different points and were given fluids by the team’s athletic training staff to combat the cramping.

It wasn’t clear whether Hamilton was also dealing with another physical issue. Ravens defensive coordinator Mike Macdonald declined to discuss Hamilton’s status, deferring the question to head coach John Harbaugh, who wasn’t available to reporters. The 14th overall pick out of Notre Dame in last April’s draft tweaked his ankle earlier in camp but has been playing through the injury. He walked off to the side of the field Monday and had his ankle re-taped and quickly returned to practice.

Injury prevention has been a major focus for Harbaugh and his staff this summer after the team endured a litany of major injuries last season. The Ravens started training camp with a longer ramp-up period. They changed up their practice schedule and are mixing in “execution practices” to give the players a bit of a break. Wednesday was just their second time in pads this season and several players struggled with the heat.

• Jackson had a solid afternoon of work, taking several shots down the field while also mixing in some underneath stuff. As usual, he connected often with wide receiver Rashod Bateman and Andrews. Jackson went 17-of-24 in full-team work with an interception by rookie Damarion Williams. Jackson gave undrafted rookie Makai Polk a chance to make a play on a deep shot, but he was surrounded by two defenders and Williams went up and got the ball. Jackson was 6-for-7 in seven-on-seven sessions.

• Adam Dedeaux, a quarterback guru who has been working with Jackson the past two offseasons, attended practice for the second straight day. Dedeaux primarily worked with Jackson Wednesday, but also spent some time with backup Tyler Huntley and communicated with offensive coordinator Greg Roman and quarterbacks coach James Urban throughout the workout. Dedeaux, who works with a number of NFL quarterbacks, including Matthew Stafford, Dak Prescott and Matt Ryan, has attended Ravens practices before. “We’re very familiar and very comfortable with Adam Dedeaux,” Roman said. “We spent a lot of time talking to him and pretty much explaining what we were wanting to get done and him giving us feedback on what he likes to do and kind of really getting a feel. And really, after talking to him initially, I was like, ‘Man, this guy is really sharp. He’s really good.’ Lamar works with him in the offseason some, and then he’ll come here and work with him, too. Anything we can do to help our cause, right? I think Adam is a real strength for us.”

• Offseason safety acquisition Marcus Williams has been relatively quiet in camp, but he denied the offense a touchdown in the first full-team session by stepping in front of Wallace just outside the end zone and deflecting away a Jackson pass. Otherwise, the offense got the better of the defense in the session with Jackson hitting Bateman twice and Andrews once. On the Andrews touchdown, Ravens rookie center Tyler Linderbaum and veteran left tackle Ja’Wuan James served as the lead blockers with Linderbaum putting safety Chuck Clark on his back and James shoving cornerback Marlon Humphrey several yards into the end zone. After the period, Macdonald urged his group to wake up.

• The latest best-on-best matchup between Bateman and Humphrey in the one-on-ones was claimed by Bateman, who won with an inside move. Other highlights included Slade Bolden easily getting free from Jalyn Armour-Davis in a matchup of Alabama rookies, Jaylon Moore getting the best of Denzel Williams with a diving deep catch of an Anthony Brown throw and Armour-Davis blanketing Wallace. When the defense won the last rep, thanks to an overthrow of Devon Williams in the end zone, Ravens pass game specialist Keith Williams and Bateman did a round of pushups.

• The defense started to hold its ground in the second full-team session as Williams intercepted Jackson and nose tackle Aaron Crawford pushed Linderbaum back into Jackson, prompting the quarterback to throw the ball away. However, the highlight of the period was Jackson’s 80-yard touchdown to Andrews, who streaked down the middle of the field and sprinted to the end zone as safety Tony Jefferson gave chase.

• Second-year wide receiver Binjimen Victor, who is in the mix for the fifth receiver role, continues to build momentum. He made several catches Wednesday, elevating over Kyle Fuller in one-on-ones, beating Armour-Davis in the back of the end zone in a full-team session and making a deep catch later while covered tightly by Kevon Seymour.

• Boyle had another drop, but Jackson went right back to the blocking tight end two plays later and Boyle secured the ball and rumbled into the end zone.

• There was predictably a number of collisions with the pads back on. Ricard bounced off of Fuller, who stepped up to meet the fullback after a reception, and McCrary dropped linebacker Jeremiah Moon to the ground with a block. Fullback Ben Mason, who loves when the pads go on, got into the act, driving defensive tackle Broderick Washington a few yards out of a play. Humphrey slung James Proche out of bounds after the wide receiver made a reception.

• The offensive line was better than it was in Monday’s first padded practice. Still, Justin Madubuike, Brent Urban, Odafe Oweh and Vince Biegel all registered sacks. On Oweh’s sack, Jackson booted the ball across the field in frustration. About 45 minutes later, he did the same when the offense took a delay-of-game penalty.

• Malik Harrison did well to pursue a ball carrier and force him back inside, all while fending off a Tony Poljan hold. Making matters worse for Poljan, his helmet flew off on the play.

• Huntley and Proche connected for a long touchdown, but the most impressive aspect of the play was how hard undrafted rookie wide receiver Shemar Bridges was working downfield to block for Proche. Several coaches and teammates waited for Bridges to return to the sideline to congratulate him on his effort to spring Proche.

• It was only in warmups and he wasn’t being defended by anyone, but Devon Williams made one of the best catches of camp with a one-handed grab of a Brown deep throw.

• With Nick Moore out of practice, former Ravens punter Sam Koch, now working for the team as a special teams consultant, did some long snapping.

Russian airbase on western coast of Crimea damaged in explosions