The Baltimore Ravens didn’t make any moves Tuesday in their cutdown to 53 players that could be characterized as huge surprises. Josh Oliver making the team as a fifth tight end was a moderate surprise. The Ravens keeping 11 offensive linemen fits that description as well, although that feels temporary.

However, there were no trades after general manager Eric DeCosta, who loves to wheel and deal, made three ahead of the 53-man cutdown last year. The most prominent player to be let go was safety Tony Jefferson and it was well established that he was on the roster bubble. The second-most notable release was defensive end Brent Urban. He’ll probably re-sign with the team in the next 48 hours.

For the most part, Tuesday proved mostly predictable for the Ravens and the team’s decision-makers. Special teams factored in the decision-making, an undrafted free agent made the regular-season roster and the Ravens kept just two quarterbacks.

The Ravens also released seven vested veterans who are not subject to waivers and can now sign with any team: Jefferson, Urban, offensive linemen Kahlil McKenzie and David Sharpe, outside linebacker Steven Means, and defensive backs Kevon Seymour and Daryl Worley.

The Ravens clearly aren’t done. Veteran running back Kenyan Drake, who was recently let go by the Las Vegas Raiders, was at the team facility for a physical Tuesday. If all went well, he’ll likely officially sign with the team late afternoon Wednesday and be added to a running back mix that won’t include Gus Edwards for Week 1 against the New York Jets and may not include J.K. Dobbins.

Edwards, who is rehabbing a knee injury that cost him the entire 2021 season, will miss at least the first four games while on the physically unable to perform list. Dobbins, who also missed all of last year when he tore his ACL in the preseason, is still working his way back and has physical hurdles to clear before he’s game ready. The Ravens have been looking to upgrade their running back depth, as none of Mike Davis, Justice Hill, Badie or McCrary really stood out during the preseason.

The Ravens also are expected to create at least two roster spots after 4 p.m. ET on Wednesday, when they move rookie tight end Charlie Kolar (hernia) and rookie edge rusher David Ojabo (Achilles) to injured reserve. By holding off 24 hours, it keeps Kolar and Ojabo eligible to return and play this season. They’ll have to miss at least four games.

There are a few ways that the Ravens could fill the roster vacancies. Drake could slide into one of them. It also seems likely that the Ravens will try and re-sign Urban, an organizational favorite who played well in training camp. Baltimore has only five interior defensive linemen, and one of them, rookie third-round pick Travis Jones, is sidelined by a knee injury and uncertain for Week 1.

The moves Tuesday, coupled with Ojabo ultimately going on IR, will leave the Ravens with just two healthy outside linebackers: Odafe Oweh and Justin Houston. That’s untenable. Even if they re-sign the veteran Means, the Ravens might have to add another outside linebacker ahead of their Sept. 11 opener — or they can simply load up their practice squad with outside linebackers and use standard elevations for the first couple of weeks until Tyus Bowser is ready to return from the PUP list.

In other words, DeCosta and the team’s decision-makers still have plenty of work to do on the team’s roster. Let’s react, though, to some of what they did Tuesday: 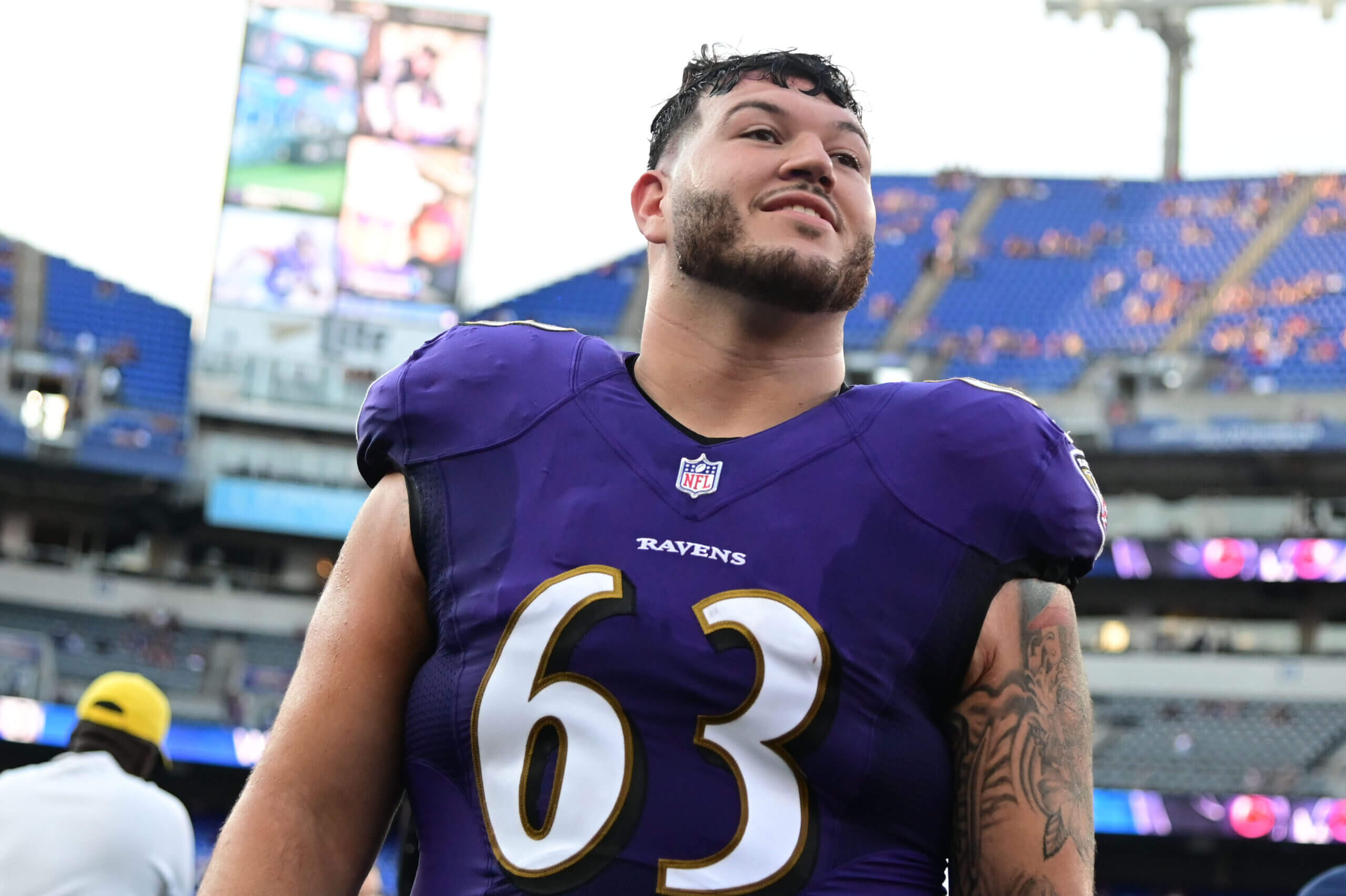 Offensive lineman Trystan Colon was kept on the initial 53-man roster, but he could be a trading piece for the Ravens before the season opener. (Tommy Gilligan / USA Today)

Eleven is a crowd: Given some of the health questions involving tackles Ronnie Stanley and Ja’Wuan James and the uncertainty at left guard, it was widely expected that the Ravens would keep 10 offensive linemen. They kept one more than that as Trystan Colon got the nod as the team’s 11th O-lineman. It may not stay that way. Colon could be a trade chip if another team is concerned about its center depth. One of the team’s left guards, Ben Powers, Tyre Phillips or Ben Cleveland, could ultimately be moved as well. The Ravens know how in demand roster-caliber offensive linemen are in the league and their moves Tuesday suggested that they didn’t want to lose one of them for nothing. Keeping Colon, who has held his own in three starts over the past two years, particularly makes sense because rookie starting center Tyler Linderbaum is still working his way back from a foot injury and his backup, Patrick Mekari, might be needed to play some tackle if Stanley misses the first couple of games.

Two is not: The Ravens’ regular-season roster last year included Oweh, Houston, Bowser, Hayes and Jaylon Ferguson, and then they re-signed Pernell McPhee a few days later, giving them six outside linebackers heading into Week 1. By 5 p.m. Wednesday, after Ojabo likely goes on IR, the Ravens will have two guys at the position. Expect the Ravens to add two or three edge guys to their practice squad. They also can put a waiver claim on an edge rusher Wednesday. Either way, their game roster on Sept. 11 will obviously include more than two outside linebackers.

Surprise, surprise: The inclusion of Oliver was probably the biggest surprise. The team’s No. 3 tight end last year, Oliver didn’t have a bad training camp and preseason. He was just relatively quiet until the final game when he caught two balls for 41 yards against the Washington Commanders. However, the Ravens coaches feel like he improved since last season and still has upside to get better. When Kolar goes to IR Wednesday or Thursday, the Ravens will also be down to four tight ends. That’s not entirely out of whack for a team that utilizes the position as much as anybody in football. Plus, keeping Oliver gives the Ravens some insurance if Nick Boyle, who has battled a knee issue, regresses physically.

The ones who got away: Mack played well enough to make the Ravens’ roster. He also brings some pass-rushing juice as an interior defensive lineman, which the Ravens have lacked. The Ravens have five other interior defensive linemen and the pending return of Urban will make it six. Still, a strong case can certainly be made that they should have kept Mack, who put out good tape in the preseason and is a strong candidate to get plucked on waivers. Washington is another guy who could garner outside interest. He lacks size and top-end speed, but Washington seems to be around the ball a lot and has cornerback/safety flexibility.

It’s rare but not unprecedented: Badie, a rookie out of Missouri who lit up the SEC last year, was considered a favorite to get the team’s third or fourth running back spot. That, however, was not because of anything he showed in training camp or the preseason. He averaged just 2.8 yards per carry in three preseason games. The Ravens, though, hate cutting first-year draft picks, so it was assumed that Badie would be safe. He wasn’t. In a four-year span from 2017 to 2020, the Ravens cut only one of their 37 draft picks at the conclusion of their first preseason/training camp with the team. That was 2018 seventh-round defensive tackle Zach Sieler, who has become a key member of the Miami Dolphins’ defense. However, the Ravens cut one fifth-round pick (Mason) last year and traded another (cornerback Shaun Wade). And now, it’s Badie who was let go just four months after he was drafted. The market is loaded with running backs, so the Ravens probably feel good about the chances of Badie clearing waivers and returning to the practice squad.

Undrafted rookie run continues: When Michigan inside linebacker Josh Ross made the team’s 53-man roster, it marked the 18th time in 19 years that an undrafted rookie will be on the regular-season opening roster. It happened 16 straight years, but that streak was broken in 2020. The Ravens got back into the act late last summer, keeping Washington. Ross made the team on the strength of a strong preseason. He had a team-leading 20 tackles in three games. It certainly also helped that he played last season at Michigan under Ravens defensive coordinator Mike Macdonald.

Special teams matter: It’s become a minor source of frustration from fans that special teams play factors so prominently in the team’s roster decision-making. Of course, that’s also the reason the Ravens annually have one of the best special teams units in the NFL. Tuesday offered another reminder of the emphasis the Ravens place on it. Inside linebacker Kristian Welch, who struggled defensively in the preseason and was outplayed by Ross, was selected for the 53. Welch has been a core special teamer for the Ravens the previous two years, and last season he played the third-most special teams snaps on the team. The only guys who played more, Anthony Levine Sr. and Chris Board, are no longer on the roster, so it probably made sense that the Ravens held on to Welch. Running back Hill and wide receiver Tylan Wallace also survived the roster cuts and figure to have more significant roles on special teams than they do on offense.