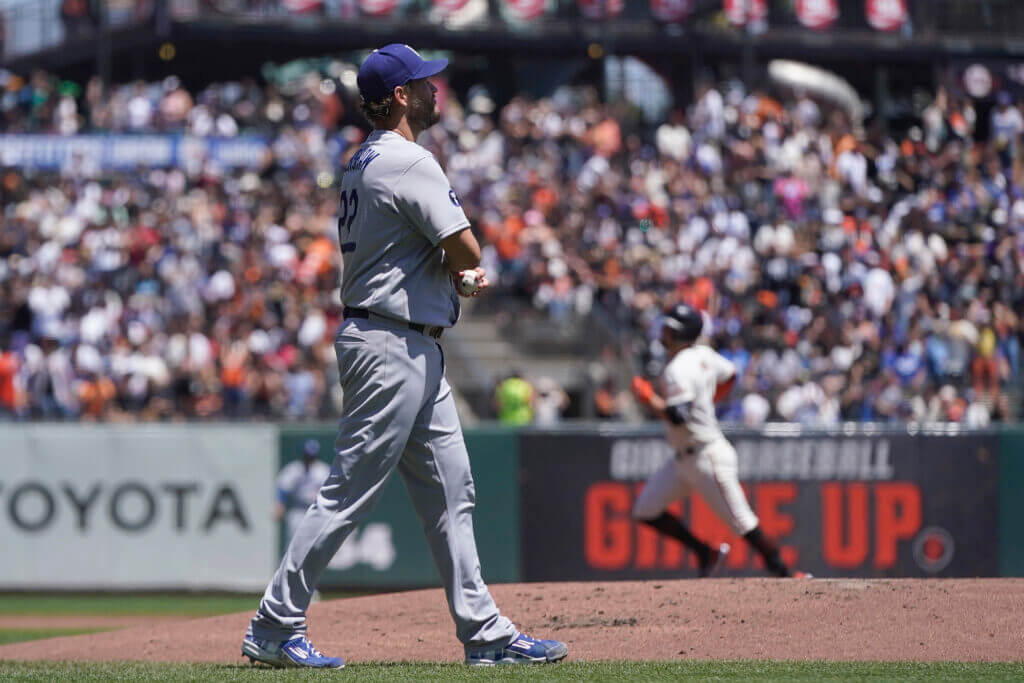 SAN FRANCISCO — Clayton Kershaw’s discomfort was apparent and immediate. As he threw one warmup pitch ahead of his fifth inning of work at Oracle Park on Thursday afternoon, he glanced toward the visiting dugout and motioned with his arm that he would try one more. After a minimal-effort toss, he trudged off the mound.

“It’s my back,” he appeared to say as he winced walking off.

It was in this ballpark, on a similar sunny afternoon two months ago, that Kershaw officially returned and assuaged concerns after missing a month with an inflamed SI joint that caused discomfort in his lower back. At the time, Kershaw expressed optimism that he could resume the season with a clean bill of health despite the recurrence of back issues that have caused Kershaw to miss time on five occasions over the last seven seasons.

“Just felt something kind of lock up there,” Kershaw said, adding that he hadn’t felt anything before those warmup pitches during the Dodgers’ 5-3 win over the Giants. “Just more back stuff.”

Now, the issue will sideline him again, and the Dodgers’ inability to add a top-level starter at this week’s trade deadline comes into further focus. Manager Dave Roberts said Kershaw will go in for tests on Friday in Los Angeles, adding that a return to the injured list was “certainly not out of the question.”

Kershaw came back to the Dodgers this spring on a one-year, $17 million deal and seeking to go year-to-year after missing last October with an elbow issue. His left arm has held up brilliantly, as has his production. In his 15 starts this season, Kershaw’s posted a 2.64 ERA, twice carrying perfect games through seven innings. He started the All-Star Game for the first time in his home ballpark. And once again, he was shaping up to be one of the Dodgers’ most critical starters in a postseason run.

“Certainly,” Roberts said, “the calendar is not on our side.”

Dave Roberts said Clayton Kershaw’s back “checked up on him” after one of his warm-up throws. Will get testing tomorrow in Los Angeles. Too early to say for sure, but Roberts said an IL stint is “certainly not out of the question.”

The Dodgers are already without Walker Buehler, whose status as a starter for October is uncertain because of a  flexor strain and surgery to remove a bone spur from his right elbow. Dustin May is still at least two rehab starts away from returning from Tommy John surgery. Even Andrew Heaney, who is healthy, is on a pitch cap due to an abundance of caution over the state of his shoulder. Several key relievers, including Blake Treinen, Brusdar Graterol, Danny Duffy, Tommy Kahnle and Victor González continue to work their way back with varying degrees of certainty regarding a return.

Los Angeles sought rotation additions at the deadline, notably with a pursuit of Marlins right-hander Pablo López, but they walked away from Tuesday having actually subtracted from its starting pitching depth by sending swingman Mitch White (who has a 3.70 ERA in 56 innings this season) to Toronto. The Dodgers preached confidence in a collective of arms to take down innings, even with a rotation that was going to put a heavy load on the likes of Kershaw, Julio Urías, Tyler Anderson, Tony Gonsolin and Heaney.

“We feel really good about the potential of what our pitching staff can look in October,” Dodgers president of baseball operations Andrew Friedman said on Tuesday. “We’re not relying on all of them coming back and being great, (but) some combination of that puts us in a really good position to have a really strong October pitching staff. With the way our guys have performed, with the guys we have coming back, we felt really good about that group.”

Added Roberts: “It’s about the pitching staff, and when you’re talking about winning one game or 11 games in October, we just feel the compilation of pitchers that we have, we can prevent runs for 27 outs. And there’s no one way to do it. It’s essentially just confidence in how we can do this collectively.”

That collective just got thinner with two months until October. Until Dustin May’s return, more workload could fall to the likes of rookie starters Ryan Pepiot and Michael Grove, who remain despite being possibilities in potential deadline packages for bigger pieces. Each of them has put together mixed results during their brief stints in the majors.,

The Dodgers have leeway to let Kershaw work back if he doesn’t miss significant time. The Dodgers are playing some of their best baseball. Since their last trip to San Francisco, in mid-June, they’re 33-10 (a 124-win pace).

They are not in a heated postseason chase as they were last summer; they wrapped up their eighth consecutive win over the reigning division champion Giants on Thursday afternoon, all but burying their rivals, who fell to 51-55. The Dodgers already led by two runs in the sixth inning when Giants reliever Jarlín García mimicked the Dodgers’ hit celebration by tapping his head after a Cody Bellinger strikeout, then again after striking out James Outman. As García walked off the mound, he pointed at Mookie Betts in the on-deck circle, who was perplexed to have been roped into the drama.

A fiery Gabe Kapler was ejected following Jarlin García’s exchange with Mookie Betts to end the top of the sixth inning 😮 pic.twitter.com/nTdngYWJCw

“What’s your problem?” Betts barked back.

When Trea Turner slugged a solo shot in the next inning, the dugout all did the celebration in unison.

Where the Dodgers are at is a 12-game advantage over the second-place Padres with 57 games left to play. They need to get Kershaw back upright, and the 96.7 percent odds of winning a first-round bye, according to FanGraphs, buys them time.

But it doesn’t buy them insurance, or brace them in the case they’re suddenly looking at a postseason run without their franchise icon.

Shirley Barrett obituary: ‘She never stopped being the life of the party’ | Australian film