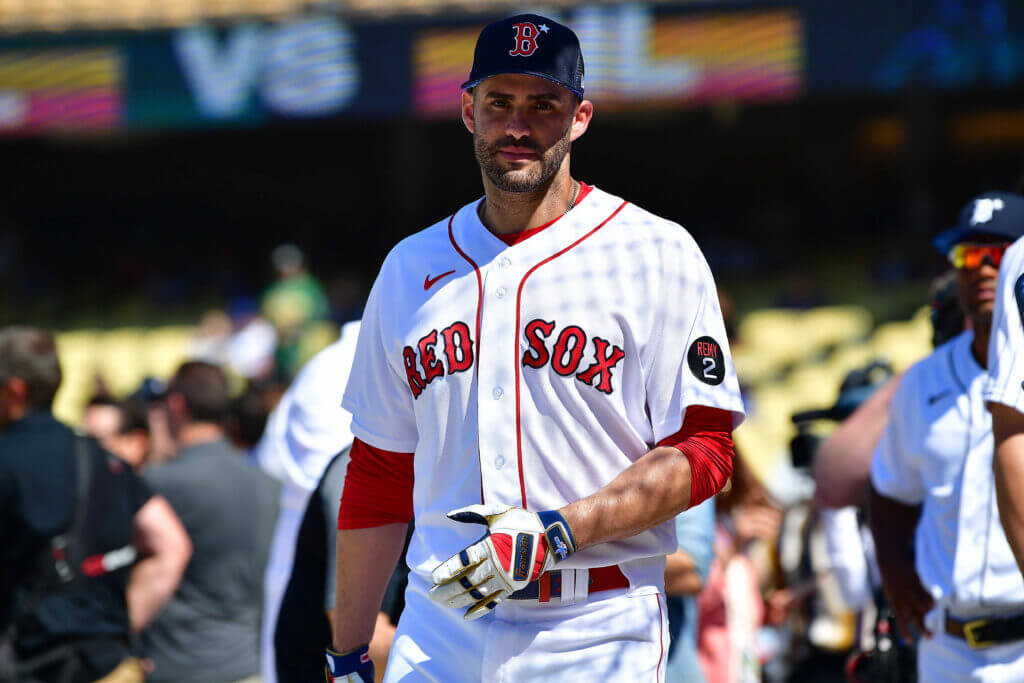 BOSTON — J.D. Martinez walked over to meet the media in the Red Sox clubhouse after Sunday’s win against the Milwaukee Brewers. But before the session began — perhaps his last group interview in Fenway Park before the Boston media — Martinez paused, retreated to his locker, and then returned wearing his Red Sox hat.

The designated hitter, whose fifth-inning double on Sunday helped spark a 7-2 win over the Brewers, has been mired in trade rumors the past few weeks thanks to his impending free agent status, and the ugly July swoon of the Red Sox.

Asked what the hat meant to him, Martinez replied, “Memories. Coming here and being part of a great organization. A first-class organization, and you look at (the hat) and think about winning.”

Martinez insisted he wasn’t focused much on the possibility he had just played his last game at Fenway Park as the team heads to Houston with the Tuesday trade deadline looming. But it’s been a hard topic to avoid of late.

“I’m not blind. I know what’s going on,” Martinez said.

Chief baseball officer Chaim Bloom noted last week that he had no plans to trade Xander Bogaerts or Rafael Devers, but made no such promises about Martinez and fellow impending free agents Christian Vázquez, Nathan Eovaldi, Kiké Hernández, Michael Wacha or Rich Hill among others.

JD Martinez on trade rumors surrounding him: “I want to make this as hard on Chaim as possible”

“As far as I know I’m here,” Martinez said. “I’m not going to think anything otherwise. I want to make it as hard on Chaim as I can. If we keep winning I think we can do that.’

Vázquez, who’s spent his entire career in Boston since being drafted in the ninth round in 2008, moved into fifth all-time in games caught (651) in Red Sox history this weekend. He’s made it clear he’d like to stay with the team beyond this season, but noted on Sunday he hasn’t had any recent contract talks with the front office.

“We’re still here,” Vazquez said. “We control what we can control. We’re here fighting together. We are family and we’re gonna continue until we see what happens in these couple of days. We’re still here with this uniform and I hope we can stay here.”

The Red Sox win on Sunday, moving them three-and-a-half games back of the third wild-card spot, showed what the lineup is capable of — even without some of its key hitters. But it’s an outcome that’s been far too infrequent of late, as the team finished July with an 8-19 record. Starter Josh Winchkowski picked up the win Sunday. It was the first win for a Red Sox starting pitcher in the entire month.

That swoon has created a frustrating limbo for a roster that should be good enough to compete, but has been beaten down by injuries and inconsistency, creating a complicated buy or sell (or maybe both?) problem for Bloom.

The players have been trying — unsuccessfully — to prove their club is worth investing in, rather than scraping apart. Martinez said that he thinks that may be part of the problem.

“I feel like the pressure has been like that since we came back from the All-Star break,” said Martinez. “Everybody feels like you’re fighting-for-your-life type stuff, fighting to keep the band together. I think that’s the reason — what’s hurt us, honestly. But it is what it is.

“I don’t think it’s a mystery to anyone in this clubhouse or even you guys, I believe this is a contending team,” Martinez added. “Obviously if we can just get healthy and get our guys back on the field, this is a strong team. Unfortunately for us we’ve had really bad injuries and one right after another.”

On Sunday, facing a 2-0 deficit in the fifth inning with two outs, Xander Bogaerts doubled to left. Martinez, Vázquez and Alex Verdugo followed in quick succession, spraying doubles across the field scoring five runs in a matter of minutes. Meanwhile, the Red Sox played clean baseball with solid defense, another area which has been lacking of late.

Bloom hasn’t ruled out adding to the roster, as he continues to thread the needle between competing now and building for the future. At the same time, with so many impending free agents likely departing after the season, not taking advantage of an opportunity to get something in return (other than a draft pick for those given qualifying offers), seems imprudent.

Ideally, any return at the deadline would be able to help the club now and in the future, but that’s easier said than done, especially with rental players.

It’s clear, though, that the players in the clubhouse are hoping to stay together for one last run, no matter how tall a task.

Asked if he thinks Bloom considers the club as it is, a contender, Vázquez paused, “I don’t know,” he said. “But I know on this club, in these walls, we believe in each other and know we can do this together. We did it before and we need to be together in this way.”