BOSTON — The Red Sox had allowed 11 runs in their previous five games. Then they gave up 11 on Saturday night alone. The result was ugly, an 11-2 loss to the Cardinals that had manager Alex Cora considering — but not actually using — a position player to pitch the ninth inning.

But the Red Sox had a shot. When they were within 4-2 in the fifth, their Win Probability as measured by FanGraphs was almost 35 percent. Not great, but not hopeless.

By the end of the sixth inning, it was hopeless.

“There’s going to be games like that when it’s 4-2 and we need a few shutdown innings,” Cora said. “With our offense, we have a chance to come back, but we have to do a better job in the middle of the game.”

The middle of the Red Sox bullpen continues to be a problem. Being shorthanded in the rotation has a trickledown effect, and two of the four relievers Cora used on Saturday night were pitchers the Red Sox optioned to Triple A late last month only to bring back almost immediately because of injuries. The Red Sox were able to hold on and win on Friday using four of their most reliable arms, but when they were forced to dig deeper on Saturday, the game got away from them.

The Red Sox bullpen has the most meltdowns — appearances that reduce win probability by at least 6 percent — in the majors. Both Hirokazu Sawamura and Hansel Robles qualified for meltdowns on Saturday when they combined to allow six runs in the sixth inning. Sawamura has been the most lopsidedly meltdown-prone reliever on the staff, while Robles has been wildly inconsistent with solid numbers but also a team-worst four blown saves to go with his five meltdowns.

“We need some guys to step up,” Cora said. “(Ryan) Brasier has done an amazing job since he got back (from his brief demotion). Hansel, on and off. We gotta get him to be more aggressive in the zone. Throughout the season, the walks have been a factor. Last year he didn’t do that toward the end, mid-August to September. We need him to be more aggressive in the zone. Obviously, the velocity isn’t 97, 98 like last year, but it’s still good enough to attack hitters.” 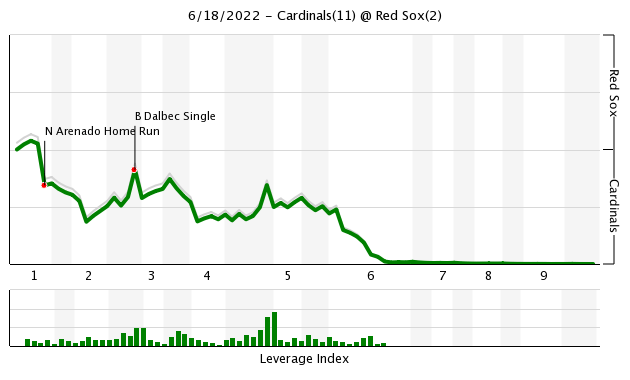 The FanGraphs rolling Win Probability for Saturday’s game shows much of the damage was done against starter Kutter Crawford. When Nolan Gorman hit a solo homer in the fourth inning, the Cardinals already had an 80 percent chance of winning. The Red Sox starter put the team in a bad spot (and he was optioned to Triple A immediately after the game).

So, no, Crawford wasn’t very good on Saturday, but he’s also not supposed to be doing the heavy lifting. He’s basically their ninth-string starter, in the rotation because three pitchers are on the injured list (Chris Sale, Nathan Eovaldi and Garrett Whitlock) and another is too valuable in relief to move back into the rotation (Tanner Houck). When the Red Sox scored in the fifth to make it a 4-2 game, it wasn’t an ideal situation — the Red Sox still needed to make up ground and eat up innings — but it wasn’t an insurmountable deficit.

Two innings later, it was 10-2. Ballgame over. The win probability flatlined to the very bottom. The Red Sox lead the majors in that sort of dramatic bullpen shift.

One Red Sox reliever (John Schreiber) ranks among the top-30 in Win Probability Added among major-league relievers. Houck (ranked 38), Austin Davis (47) and Matt Strahm (70) are the only others who rank in the top 100, and Cora used all four of those guys to finish off Friday’s win. Davis had a rough outing, and Houck nearly blew the save, but those four ultimately made it work.

To try to keep Saturday’s game within reach, Cora had to pick from the middle of his bullpen. Brasier pitched well (a hitless fifth inning) but Robles was charged with four earned runs and Sawamura allowed four baserunners before recording his second out. A two-run game became an eight-run game, and even the Red Sox offense wasn’t likely to make up that difference. This was only their third loss by more than three runs in more than a month.

“We didn’t throw enough strikes in that inning,” Cora said. “We loaded the bases and brought in Sawa to try to get a groundball, and it didn’t happen. Just a tough inning right there.”

Thanks in no small part to Schreiber, Strahm, Houck and Davis, the Red Sox are top 10 in the majors in shutdown appearances (relief outings that improve win probability by at least 6 percent). That seems pretty good until you look at the very top of the leaderboard to see the top three in shutdowns are the Rays, Blue Jays and Yankees — the three teams the Red Sox are trying to catch in the American League East.

Getting some injured starters back should help, and the Red Sox are obviously hopeful that injured Matt Barnes isn’t a lost cause after his brutal first two months of the season, but the middle of the Red Sox bullpen is a weakness that’s been exposed many times this season. As Cora said, there are going to be more two-run deficits in need of a shutdown and a comeback. The Red Sox have an offense capable of a comeback. Do they have enough relievers they can trust with a shutdown?