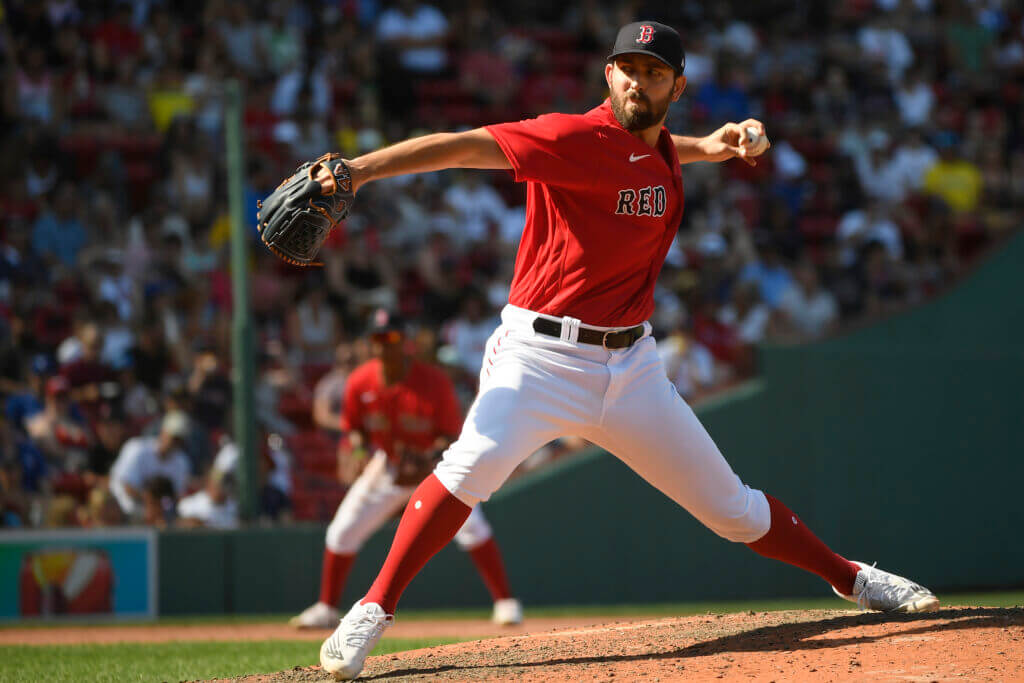 BOSTON — Baseball Reference doesn’t keep track of the number of times a manager says his bullpen is short-handed, but if there were such a stat, the Red Sox surely would lead the league. Their bullpen on Sunday?

It had been that way all year, and so the Red Sox — predictably — played a game that was far too typical.

Their starter Nick Pivetta lasted only five innings, and although he left the game with his team within striking distance, trailing only by two, the whole thing got out of hand when the bullpen door swung open. Three runs in the sixth, four more in the eighth, and the Red Sox lost 12-4 in their series finale against the Rays. The Red Sox won the series, but they’re losing the battle.

“Too many games like that, to be honest with you,” Cora said. “For how good it was this series, it’s a bad taste. … It just got away for X or Y reason. Bad defense, or we’re short (in the bullpen), or we don’t pitch the first five innings. We’ve seen too many of those games. It’s always one too many, but we’ve seen a lot. A lot of those.”

Bullpen management is a struggle every season, and Cora is typically pretty strict about keeping his players rested and avoiding overuse. But that’s been especially challenging this year. The Red Sox rank 22nd in the majors in rotation innings. None of the teams below them is currently in a playoff spot (except the Rays, who intentionally manipulate workload through openers and bulk relievers).

For the Red Sox, that burden has fallen on a bullpen that’s had its own problems. Closer Tanner Houck is currently on the injured list, go-to workhorse Garrett Whitlock has been getting ample days off since suffering a hip injury, and Opening Day long-man Kutter Crawford is now in the rotation. At least half of the bullpen spots belong to relievers who have been inconsistent at best, and three of them — Austin Davis, Hirokazu Sawamura and Ryan Brasier — pitched on Sunday. Brasier delivered a clean inning (though he was knocked around on Friday, which contributed to Sunday’s shortage), while Davis and Sawamura gave up the late runs that let Tampa Bay pull away. Defensive mistakes played a role, but it was just a different rendition of the same old song. As Cora said, for various reasons, the Red Sox have played too many games like that.

So, is it just perception after another ugly loss, or has bullpen management really been more difficult this season than most?

“Yes. Yes,” Cora said. “Sometimes it gets to that point with the starters, right? When they go short over and over again, you’re very short (in the bullpen). It’s one of those (challenges).”

At this point it’s probably too little, too late, but the Red Sox did start making changes after Sunday’s game.

According to a source, the Red Sox are going to DFA Austin Davis before their trip to Minnesota. He was tremendous earlier this season but has pitched to a 10.71 ERA since July 8.

According to two sources, Davis is being designated for assignment before Monday’s series opener in Minnesota, meaning the Red Sox are potentially cutting ties with a 29-year-old lefty who was a source of stability early in the season before falling apart almost completely in the past month and a half.

From April 15 to June 12, Davis pitched 22 times and allowed only one earned run. He inherited 10 runners and let just one of them score. Opponents hit .169 against him with more than twice as many strikeouts (25) as walks (12). But that run of excellence ended with a three-run mess on June 17, followed the very next day by a three-inning extended outing. Davis didn’t pitch in the next eight games, then was good again for about two weeks.

But since July 8 he’s pitched to a 10.71 ERA. He’s gotten into 19 games and allowed at least one run in 10 of them, 25 earned runs in all, including four more runs (two earned) on Sunday. Based on the slash line, opponents were hitting him like each and every one of them was Mike Trout.

“Everything is command I think,” Cora said. “(He’s still throwing) 94, 95  (mph). The stuff is still there, but he (hasn’t had command). You see flashes, but it’s not consistent anymore. I think it’s more about command. You see the WHIP, you see the walks, you see the counts, right? He hasn’t been able to put people away.”

Like Davis, Brasier has maintained good velocity, but he’s pitched to a 10.30 ERA since July 9 and has been prone to especially big blowups (four runs on Friday, five runs the Friday before that). Sawamura has pitched exceptionally well on the road (two earned runs and a 0.89 WHIP in 23 outings), but his WHIP is basically twice as high at home, and his Fenway Park ERA is 5.83 after a three-run inning on Sunday. For now, the Red Sox are using their final bullpen spot on veteran Jeurys Familia, hoping to unlock some of his old dominance after he was released by the Phillies earlier this month.

The rest of the current bullpen has been pretty good — Whitlock, John Schreiber, Matt Strahm and a recently resurgent Matt Barnes — but that’s four out of eight, and Cora can’t use his top four every night. He used Schreiber to close out a win on Saturday after Barnes, Strahm and Whitlock each pitched a scoreless inning on Friday. For Barnes and Strahm, that was two days in a row.

On Sunday, the Red Sox had to get by with what was left, and the results spoke for themselves. As they have far too many times this season.