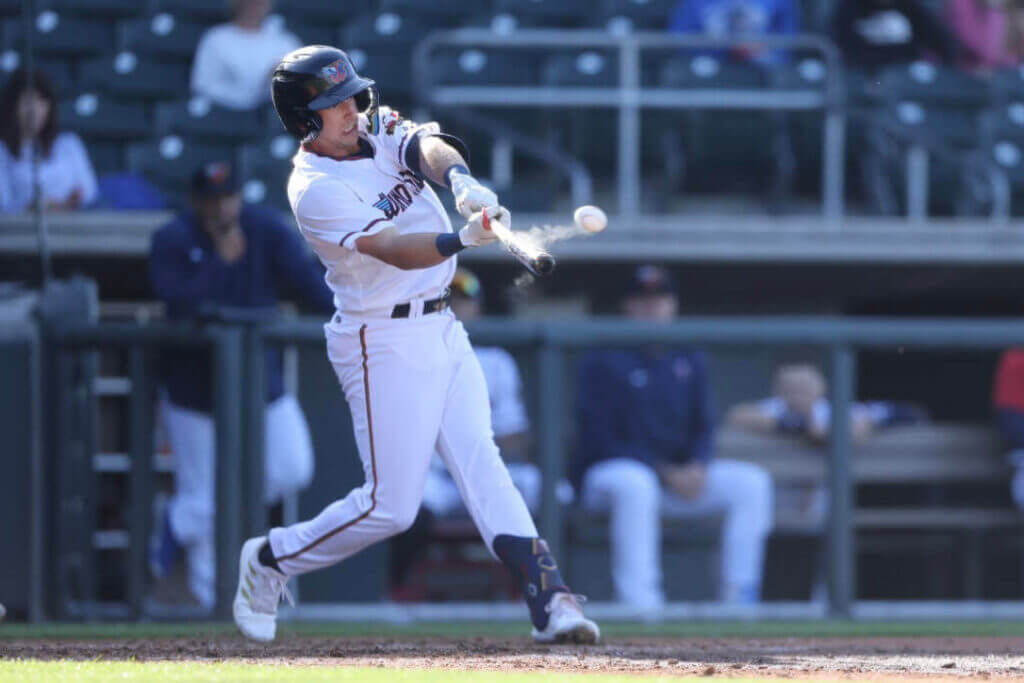 MIAMI — Jose Barrero is back in the big leagues, called up before Wednesday’s game against the Marlins and in the lineup playing shortstop and batting eighth for the Reds.

Going into each of the last two seasons, Barrero topped the Reds’ top prospects list at Baseball America and was widely seen as the Reds’ shortstop of the future.

Barrero has had two previous big-league stints and struggled to hit both times. His talent kept him atop prospect lists, but he was still seen as the team’s shortstop of the future, in part because if it wasn’t him, who was it?

Now the answer to that question is difficult, maybe because there are too many options as opposed to not enough.

Barrero started to get some competition, if not directly, but at least in the organization, last year when the team took UCLA shortstop Matt McLain with their first-round draft pick and Elly De La Cruz emerged as the most-talked-about prospect in the system and maybe beyond.

Now? One list had Barrero as the Reds’ fifth-best prospect and fourth-best shortstop prospect after the addition of four shortstops to the team’s farm system at this year’s trade deadline.

The position was already a strength in the organization with Barrero, De La Cruz, McLain and Jose Torres. Now you can add Noveli Marte and Edwin Arroyo from the Mariners, Spencer Steer from the Twins and Victor Acosta from the Padres.

“I do believe the Reds now have the best collection of shortstops in the minors,” Baseball America editor-in-chief J.J. Cooper told The Athletic. “That’s important to me because shortstops are the stem cells of a rebuild, since they have the versatility to turn into almost anything you need them to be. Shortstops become third basemen and second basemen, they become center fielders and corner outfielders. I have zero confidence in projecting who will be the Reds’ MLB shortstop in 2024 because they have so many options, but I have a lot of confidence that the Reds lineup should be filled with ex-shortstops playing other positions.”

A total of seven of Baseball America’s recently updated Top 100 prospects were traded in the week leading up to the trade deadline, three went to the Reds, three to the Padres and one to the Angels. The Reds acquired the most minor-league players of any team with 10.

The Athletic’s Keith Law called the Reds one of the deadline’s winners, just after the Padres. He also had three Reds in his updated Top 60 prospect list: De La Cruz at No. 8, Marte at No. 12 and the team’s first-round pick, Cam Collier at No. 29. Law also included Arroyo among 10 honorable mentions on his Top 60 list.

“They added a slew of high-upside prospects, and while they won’t all work out, they’ve acquired so many of those guys at this point that they’re likely to get two or three stars out of the entire system, including the players they already had,” Law said. “When you add to that the fact that they’ve had two very solid drafts in 2021-22, and some of the young players still developing in MLB, they seem like they’re in way better shape going forward than they were even four months ago.”

Cooper said Baseball America is working on updating its team Top 30 prospect lists and they are having to search for those last five prospects in some systems. For the Reds, there are players he sees as big-league contributors who aren’t even among the Top 30.

After conferring with scouts, executives and writers, here’s a look at the Reds’ Top 10 prospects before the season from The Athletic and Baseball America and a projected 2023 preseason list taking into account graduations by Barrero, Hunter Greene, Nick Lodolo and Graham Ashcraft:

Of those top 10, only three were in the system when the previous lists were published. Pitchers Brandon Williamson and Connor Phillips came over this spring in the deal with Seattle that sent Jesse Winker and Eugenio Suárez to the Mariners. McLain and Abbott were both drafted in 2021 and De La Cruz wasn’t on anyone’s radar at the start of 2021.

It’s nearly a completely different system, but one that should be ranked much higher than it was before.

With that noted, here’s a look at the 10 players (not including the player to be named acquired for Tommy Pham) the Reds received at the trade deadline, with information collected from various sources around the game:

SS Victor Acosta (from Padres): Acosta was one of the Padres’ top international signings a year ago and was with their Arizona Rookie League team. The 18-year-old is seen as a player who can play multiple positions with good defense and a plus arm.

RHP José Acuña (from Mets): The 19-year-old right-hander made his organizational debut Tuesday night for Single-A Daytona against his old St. Lucie teammates, going five innings, allowing an unearned run on four hits with six strikeouts, no walks and a hit batter.

SS Edwin Arroyo (from Mariners): Arroyo won’t be 19 until later this month, but he’s already put up a .316/385/.514 slash line with 13 home runs in 87 games at Single-A Modesto. He’s also played a pair of games with the Reds’ Arizona Complex League team and will report to Daytona soon. One rival team official said his team had Arroyo as the Mariners’ No. 1 prospect before the deal. A switch hitter and switch thrower, Arroyo is a true shortstop and of the players acquired at the deadline, may have the best chance to stick at short.

LHP Steve Hajjar (from Twins): A classic four-pitch lefty, Hajjar averages around 91 mph on his fastball, but it plays up with good carry. His slider, curve and change are all solid average. The Twins believed he had a good chance to start in the big leagues.

SS Noelvi Marte (from Mariners): The highest-ranked prospect, Marte announced his presence with authority Wednesday with a pair of homers for High A Dayton. Overall, he’s hitting .274/.360/.473 with 17 home runs and 19 doubles. Some think he may move to third base, but he does have a chance to stick at short. Regardless of where he plays in the field, the bat is his calling card.

RHP Andrew Moore (from Mariners): A 6-foot-5 right-hander, Moore was taken out of Chipola Junior College in the 2014 draft. Moore’s fastball hits triple digits and has a hard slider. He’s dominated in Single A where he struck out 58 batters in 32.1 innings, walking 17.

OF Hector Rodriguez (from Mets): The 18-year-old has played in the infield this season with the Mets’ complex team, but the Reds see him as a pure center fielder, with excellent speed. He had 12 steals in 26 games for the Mets’ Florida Complex Team and had two in his first two games for the Reds’ complex team.

SS Spencer Steer (from Twins): Steer could be the first of the players acquired to reach the big leagues. A right-handed thrower and hitter, he’s played shortstop but probably projects more as a corner infielder. One scout compared Steer to Brandon Drury, a solid hitter who can play around the infield.

RHP Levi Stoudt (from Mariners): A four-pitch pitcher, Stout has a mid-90s fastball that can get up to 98 mph. He has a hard slider that can be above-average, as well as a curveball and changeup. Stout was in Double A for the Mariners and has already reported to Double-A Chattanooga.