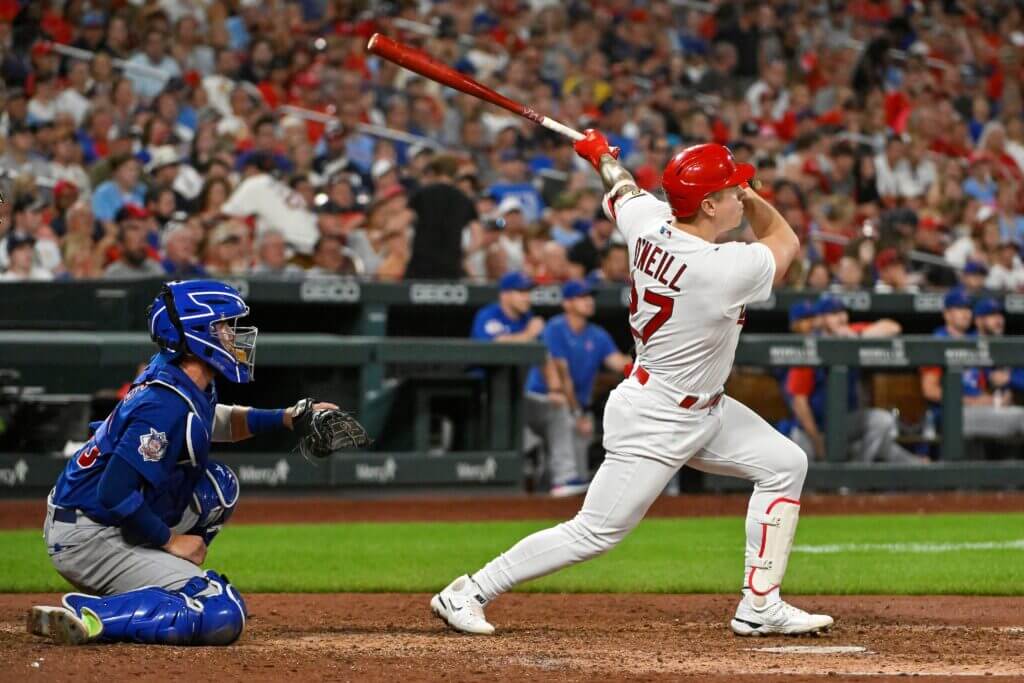 The Cardinals had just completed a resilient, come-from-behind victory over the Cubs in their first of two games Thursday afternoon, a contest headlined by a walk-off single from Lars Nootbaar in the bottom of the ninth to complete a 4-3 win. After being held scoreless for six innings by Chicago starter Marcus Stroman, the Cardinals’ heart of the order broke out in the bottom of the seventh, firing off five straight at-bats with exit velocities higher than 100 mph, to finally emerge on the scoreboard. The offensive barrage started when Nolan Gorman and Paul Goldschmidt kicked off the frame with back-to-back solo shots. Arenado followed with a double to the gap and moved to third on Paul DeJong’s deep fly ball to center field. Nootbaar followed with his own lofty fly ball, scoring Arenado and knotting the score at three apiece.

One at-bat later, Nootbaar would ensure himself as the Game 1 hero. Arenado and DeJong worked consecutive one-out walks off reliever Erich Uelmen and set the table for Nootbaar, who pummeled a 2-2 four-seamer up in the zone to right-center field to score Arenado from second and wrap up the Cardinals’ fourth walk-off win of the season.

Good teams, Marmol would say, win games like that.

A few hours later, the Cardinals enjoyed another late-innings victory, this time thanks to Tyler O’Neill, who clobbered a go-ahead three-run home run in the seventh inning to break a 2-2 tie, locking up an eventual 7-2 win. But it was José Quintana’s stellar start that paced Game 2. He pitched six innings, limiting the Cubs to one hit and one run (on a Patrick Wisdom homer in the first inning) while walking two and striking out seven on 86 pitches in his Cardinals debut.

Quintana, an 11-year MLB veteran acquired at the trade deadline to bolster an injured rotation, could hardly have scripted a more ideal first start in his new uniform. Sixty percent of his first pitches came as strikes, he generated 10 swings-and-misses and found himself in a three-ball count only five times.

“You look into the eyes of the Quintanas of the world before that game starts, and it’ll give you goosebumps how bad he wants it,” Marmol said. “It was a good first outing. … He knows what he’s doing out there.”

The result Thursday was two wins for the Cardinals, a three-game sweep of their division rival and, most importantly, a change atop the National League Central standings. After the Brewers were swept by the Pirates on Thursday afternoon, the Cardinals moved into a tie for first place atop the division at 57-48.

If you think this isn’t a revitalized clubhouse — whether it’s from their new trade deadline acquisitions, the return of Yadier Molina after over a month on the injured list or a combination of both — think again.

“It’s meaningful,” Marmol said when asked about the importance of adding key pieces at the deadline. “It really is. Because the club is sitting there and you’ve identified what’s needed, and then when you go get the pieces, not just get pieces but the right pieces, how they fit personality-wise in that clubhouse and their skill set is going to add a ton of value to what we’re doing. We didn’t go get guys just to get guys. We got the right guys.”

The pieces he alluded to are Quintana and Jordan Montgomery, with the latter arriving in St. Louis on Thursday morning. He is scheduled to make his Cardinals debut Saturday against the Yankees, his former team. The lefties will round out a rotation that has been routinely hindered by injury, bringing highly coveted stability back to the Cardinals’ weakest asset. Moves like that — combined with Molina’s return — can instantly reenergize a clubhouse.

“We just needed some guys in the rotation,” said Arenado, who connected on a towering 428-foot homer in Game 2. “We’ve got some guys that are down. (Steven) Matz and Jack (Flaherty), those are huge pieces for us. So the guys that we got, they give you innings, they’re tough. Going off my experiences facing them, it was always a tough battle, so I know it’s going to be like that for other teams too.”

“And honestly, having Yadi back is huge,” Arenado added. “His presence, what he brings to us, it just feels good to have him back. It just feels different.”

“(Molina’s) presence is dynamic,” O’Neill said. “He’s been the backbone of this team for the last 20 or so years. It’s crazy the legacy that he’s brought to this ballclub and the success he’s had over the years. To have that back is very empowering for us mentally.”

Quintana perhaps felt Molina’s impact most severely. In a scenario where nerves could easily have factored into his performance, pitching to Molina served as an instant stabilizer.

“I was focused and tried to get on the same page as Yadi right away. He called a really good game,” Quintana said. “That’s huge for me coming from Latin America and throwing to Yadi, one of my favorite Latin guys and the best catcher in baseball.”

Just how resurgent this Cardinals club feels will be tested heavily over the weekend. St. Louis will welcome the Yankees — holders of baseball’s best record at 70-36 — to Busch Stadium starting Friday for a three-game weekend set. The series should be a considerable test of where the Cardinals stack up against sure-fire playoff teams.

But their schedule favors them heavily for the rest of the month, with 14 of their next 17 games after the Yankees series coming against teams with losing records. The exception? A three-game showdown at Busch Stadium against the Brewers, the last time the two teams will face each other until mid-September.

With 57 games remaining on the schedule, no one is doubting the significance of spots in the standings. Certainly not the Cardinals, who have spent the majority of the season second in their division. And with rotation concerns ideally in the past, and growing optimism Flaherty will start for them again before the regular season ends, the Cardinals can’t help but feel they’re in an ideal position.

“This team is not only prepared, they’re determined to do something special,” Marmol said. “We got No. 4 back. We’ve got a very excited clubhouse. We got starting pitching that’s going to stabilize the rotation, and the boys are on a mission to do something.”

(Photo of Tyler O’Neill hitting a three-run home run in the seventh inning of Game 2 against the Cubs: Jeff Curry / USA Today)

Premier League: 10 things to look out for on the opening weekend

Jump for joy! Edinburgh festival 2022 takes off – in pictures | Stage