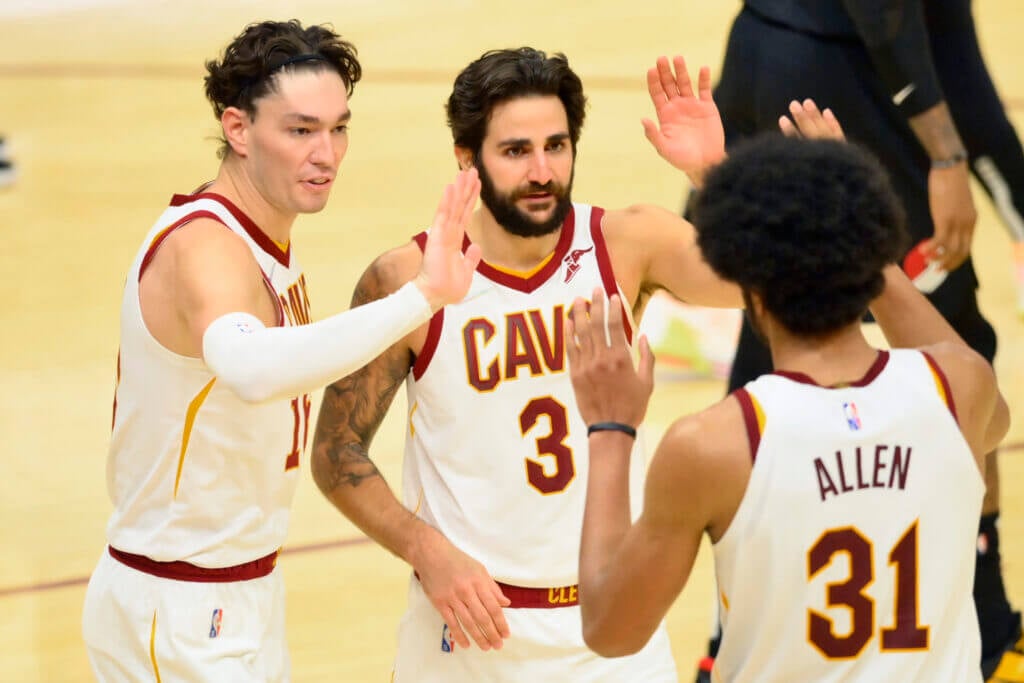 Cleveland is running it back with Ricky Rubio.

The Cleveland Cavaliers agreed to a three-year, $18.4 million contract with the veteran point guard, sources confirmed to The Athletic, bringing him back after including his expiring contract in last season’s Caris LeVert trade. Signings are not made official until July 6.

The Cavs have a $10.4 million midlevel exception available to sign players during free agency, and Rubio’s deal will use a portion of it, according to a source.

Rubio’s play for Cleveland in the first two months of the season was impactful, and the fit is still there. Rubio played in 34 games during the 2021-22 season, averaging 28.5 minutes per game as Cleveland’s sixth man. He shot 36.3 percent from the field and 33.9 percent from 3 while dishing out 6.6 assists and scoring a career-high 13.1 points per game. He played a critical role in the Cavs’ early-season success, as Cleveland went 20-14 with Rubio in the lineup.

Rubio brought a veteran presence and calmness to the second unit and helped All-Star Darius Garland come into his own as the team’s lead point guard. Rubio was a consistent threat on the floor, using his passing ability and quickness and serving as a floor general to facilitate the offense. The Cavs also used Rubio and Garland together in certain lineups, allowing Rubio to facilitate and Garland to find his shots off the ball. Opposing defenses had to make tough decisions on which player to guard, and had to be especially worried about Rubio in the pick-and-roll.

Rubio’s presence also benefited Kevin Love. As the older veterans on an otherwise young team, the two former Timberwolves rekindled their noticeable chemistry on the court in the second unit. Rubio gets an assist for Love’s own resurgence last season in his newfound role.

“With Ricky at the helm of that second unit, it was almost like we had two different lineups,” president of basketball operations Koby Altman said during his end-of-season news conference in April. “We’d have your defensive lineup that would slow things down and beat you up on the glass and get you taking tough shots. And then Ricky would come in with Kevin, and we’d run the score up, and we had a wholly different dynamic.”

But in December, Rubio tore his ACL in his left knee and missed the remainder of the season. It was a devastating blow to Cleveland, especially after losing Collin Sexton to a torn meniscus a month earlier. Cleveland traded Rubio’s expiring contract right before the trade deadline to Indiana in exchange for LeVert, thereby addressing a need after they lost both he and Sexton to season-ending injuries.

But the Cavs still liked Rubio.

“Ricky Rubio was enormously important to us,” Altman said. “And I know we didn’t have him for the vast majority of the year, but I don’t think we’re here without his injection of basketball play, but also leadership.”

Coming to an agreement on a deal with him again this offseason reiterates that much. Last season, shortly before his injury, Rubio spoke with The Athletic about finding a home here in Cleveland.

Yet bringing Rubio back does raise questions. He won’t be ready to return from his ACL injury at the beginning of the season, so how do the Cavs handle not having a backup point guard right away? They are tight on roster space after retaining Rubio, with just two spots left and a decision to make on Sexton, a restricted free agent after Cleveland extended him a qualifying offer on Tuesday. The Cavs could use another piece of their midlevel exception and one of their last remaining roster spots on an additional guard to use during the first few months of the season while Rubio recovers.

The Cavs needed to add more playmaking behind and alongside Garland to alleviate some of the defensive pressure he faced. After losing Rubio to the injury, much of the weight of the offense was placed on Garland’s shoulders, especially as Rajon Rondo – acquired shortly after Rubio’s injury – dealt with injuries of his own. While Garland took immense steps forward last season as their lead point guard, he wore down as the season progressed. Having Rubio’s presence as a floor general, when healthy, will provide a chance for Garland to rest.

After losing both Play-In Tournament games last season, Cleveland hopes to make the jump into the playoffs and beyond. It’s the next step for them in this process. In re-signing Rubio, the Cavaliers have reaffirmed he’s more than just a backup point guard to them.