You can forgive Greene, though, for not being sure his home run ball was out. In the bottom of the first inning, he led off for the Tigers and crushed a ball to center field. It traveled 413 feet and would have been a home run in 22 MLB parks. But in Detroit’s Comerica Park, it was merely a mortal triple.

“I barreled that one up and I was like, ‘How didn’t that get out?’” Greene said.

In the second inning, he sent a 104 mph grounder back at Royals pitcher Kris Bubic. Greene, despite settling into the major leagues effortlessly over his first 11 games, hadn’t quite been driving the ball in the air. He was still searching for his first home run. But Greene says he never grew anxious. He was hitting the ball well — now batting .302 with a .434 on-base percentage after 43 MLB at-bats — and is too intuitive of a hitter to try to alter anything about his approach.

“I was not anxious at all,” Greene said. “Homers are gonna come. If you try to hit homers, you’re not gonna swing the bat good. I’m just focusing on me and my swing and my approach and sticking to that. Homers will come when they do.”

The Tigers came into Saturday’s game against the Royals in desperate need of good news. It has been a long season. Greene’s recent call-up has given the Tigers some energy both in the dugout and at the leadoff spot in their batting order. Yet the Tigers offense was sleepy in Friday night’s loss to the Royals and was floundering again through eight innings Saturday.

The Tigers came into the ninth trailing 3-2. They had already come up short in a big spot in the sixth inning, when Greene was called out on a borderline low pitch from Royals reliever Amir Garrett. The Tigers had two runners on and were threatening, but Garrett got the strikeout and started roaring. Javier Báez was left in the on-deck circle, and Báez and Garrett — well-known rivals dating back to their days in the NL Central — started jawing at each other as they went back to their respective dugouts. Suddenly the energy picked up. 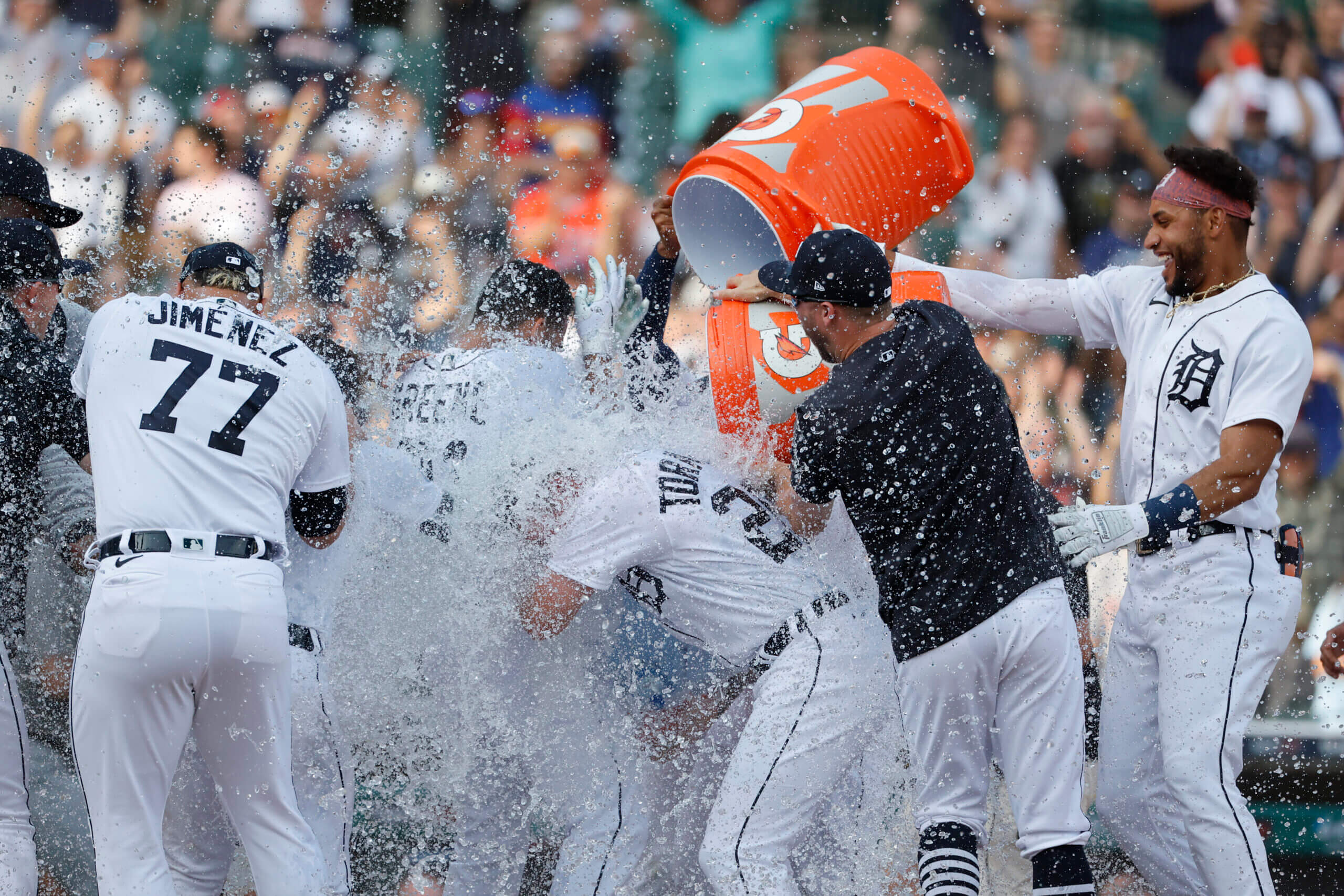 “He can do whatever he wants,” Báez said of Garrett. “I got nothing. It’s part of his game, and he knows my game.”

It carried into the ninth, when Victor Reyes hit a one-out solo homer to right field and tied the game at 3.

Greene came up next, and before the dugout was done celebrating Reyes’ homer, Greene got a 1-0 fastball from Joel Payamps. He turned on the pitch and sent that ball flying. Tigers 4, Royals 3.

“I was kind of running decently hard down the line just in case, but once I saw it go out it was awesome,” Greene said. “Just the adrenaline rush going through me, it was like I didn’t know what to do.”

Greene’s teammates seemed to leap out of the dugout as soon as the ball left the bat.

“That’s the most excited I’ve seen the dugout in a while,” Hinch said.

Of course Greene’s first major-league home run was a walk-off. Of course it traveled 432 feet. Of course Greene is quickly proving himself to be the biggest attraction on a team headed into the middle of an otherwise mundane summer.

“He just gets good pitches and good at-bats,” Hinch said. “He’s in a good place selectivity wise. You don’t see that a lot. In my short time here, not many guys can go out to those bushes.”

This is who Greene has been since the day the Tigers’ drafted him. This is why he was ranked as high as the No. 2 prospect in all of MLB.

“He’s just like a machine to get on base,” Báez said.

There are sure to be slumps and struggles along the way, but he’s handling center field with both grace and highlight catches. He is commanding the batter’s box with a calm approach but a whippy swing that had him sending balls to the bricks out beyond the Comerica Park walls earlier Saturday in batting practice.

The Tigers’ 2022 misfortunes began near the end of spring training, when Greene fouled a ball off his foot, suffered a fracture and had his MLB debut pushed back almost three months.

But Greene is finally here, and he has been worth the watch. This was the first home run of what could be a whole lot more to come.