In a summer of transition at Southampton, a brave new world is envisaged. The signing of 18-year-old Romeo Lavia, adding to the arrivals of 20-year-old pair Gavin Bazunu and Armel Bella-Kotchap, should be taken as the firmest possible indicators of the club’s unyielding focus on youth.

It is telling that Southampton have opted to double down in their efforts to recruit young players, given that the natural reaction to such inconsistencies last season would be to acquire more experience, offsetting the obvious naivety in the squad. The fact that Southampton have acquired three players, all comfortably born in the 21st century and all in core positions, reaffirms that strategy.

To put it plainly, Lavia’s natural attributes are so distinct that they should be held aloft with a large sign illuminated in bright red, reading: “THIS IS WHY SOUTHAMPTON BOUGHT HIM.”

The Belgium Under-21 international is strong, athletic and the type of midfielder well-equipped to deliver the wide remit Ralph Hasenhuttl expects. 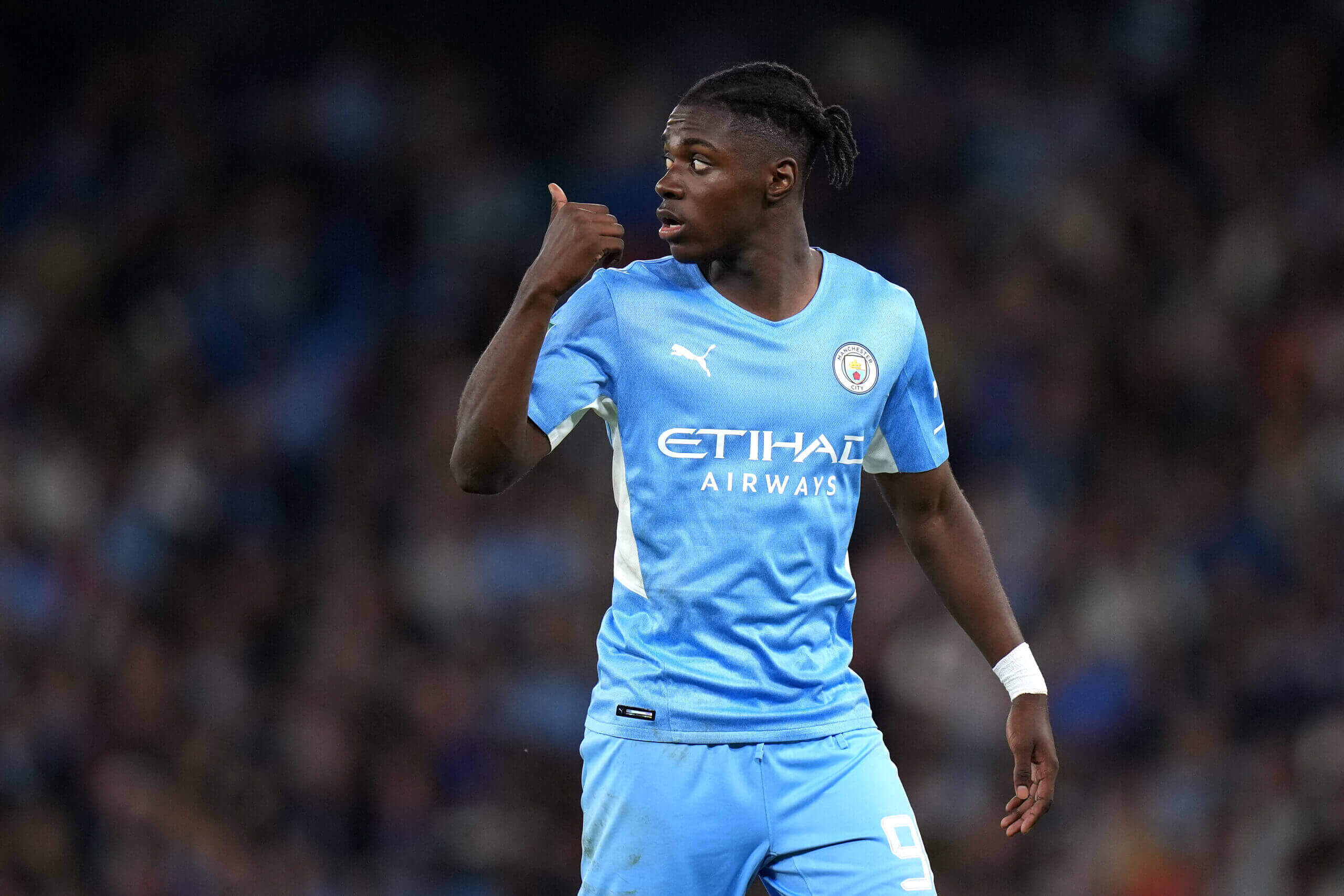 But the teenager does carry a certain curiosity. He is not, necessarily, in the mould of an archetypal Pep Guardiola No 6, but did play as the deepest-lying midfielder for Manchester City’s EDS (Elite Development Squad) 69 per cent of the time last season.

While it is important to stress that The Athletic are not directly comparing him to either player, the Belgian is similarly press-resistant to a Rodri or a Sergio Busquets in his ability to receive under pressure and subsequently play through the lines. You can understand why Guardiola was — and possibly still is — a fan.

Lavia, though, does not reflect the same metronomic qualities, in both rhythm or passing, that those two Spain stars do. This is in part down to age and experience, but also because City have appeared keen not to hammer him into one fixed position.

The example below is from City’s Under-23s game against Brighton last season.

City’s goalkeeper plays a straight pass into central midfield, splitting Brighton’s first pressing phase led by their two forwards. In notoriously the most difficult area to receive the ball on the pitch due to the potential peril, Lavia (out of shot) sprints towards the pass and controls facing his own goal. 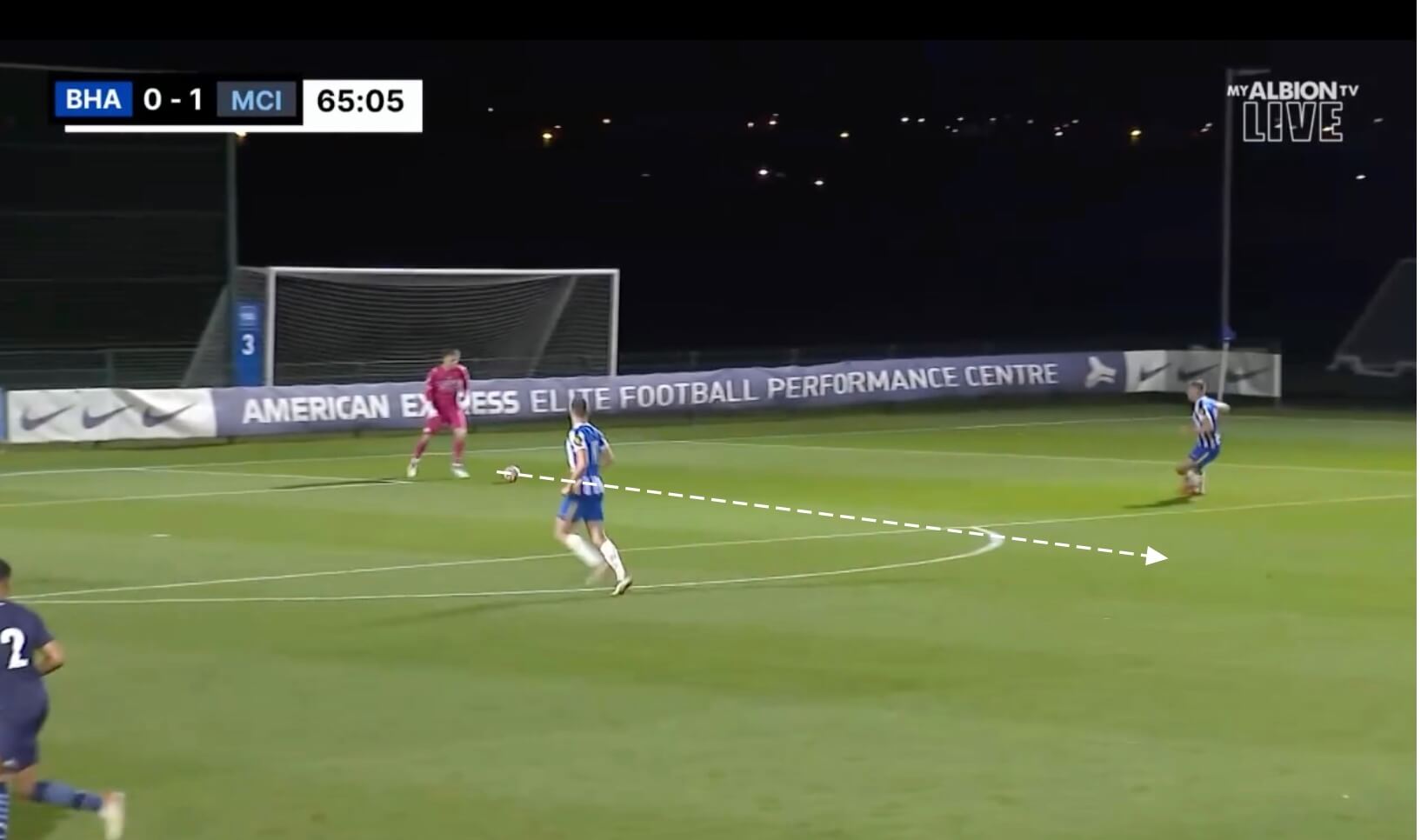 Brighton immediately apply pressure from the front and behind. Lavia’s first touch, however, is heavy and with the outside of his right foot, preventing any opportunity of Brighton forcing a turnover. Instead, early recognition of the situation allows him to spin away from both angles of pressure. He then drives into space (a discernible strength of his) and passes forward into one of the two No 8s. 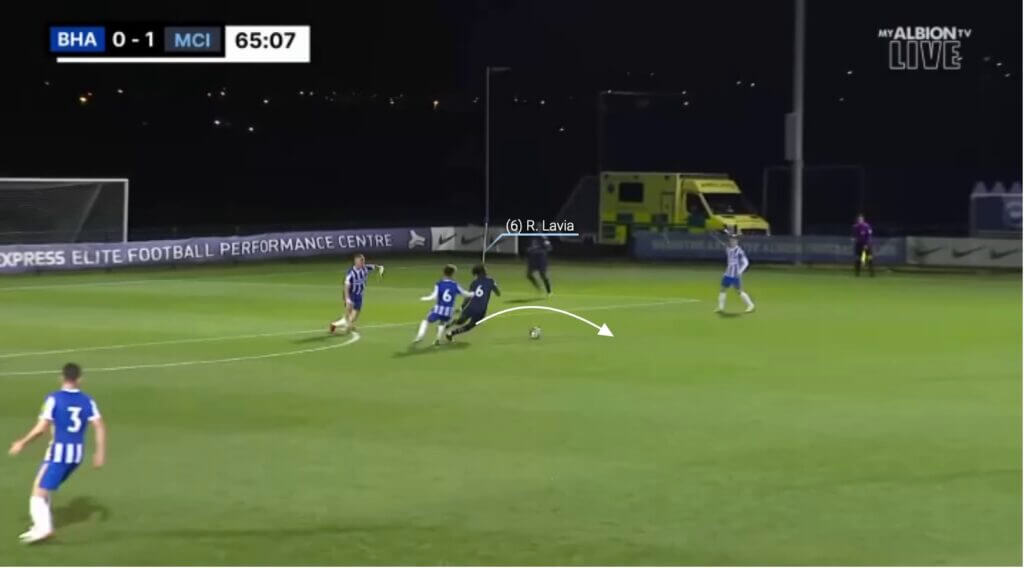 At times for club and country, Lavia has been used as a midfield shuttler to the right of a midfield three. This accentuates his natural physical gifts in more effective areas of the pitch. Last season, Lavia averaged 2.36 dribbles per game, markedly higher than Oriol Romeu’s total — the player he is likely to be in direct competition with — of 1.03.

As The Athletic detailed with the signing of Bella-Kotchap, a long-standing defect of Southampton is their lack of passing progression from central defenders and ball-carriers from deep. Jack Stephens is probably the most proficient current squad member in this respect, but his future remains uncertain. Lavia’s midfield characteristics could help to remedy this issue.

The young Belgian has shown a tendency to drop into defence when his side are in comfortable possession, becoming a third centre-back. This adjusts his side’s shape with the ball, creating additional passing lanes and more variety in their play. Should he be able to replicate this at St Mary’s and beyond, the effects could be far-reaching for Hasenhuttl. Having an adept passer in the defensive third, suitably athletic to protect large spaces should they lose the ball, would help to wash out the predictability his team displayed towards the back end of last season.

The image below, taken from a young City side’s game against with Rotherham United in the Papa John’s Trophy last season, provides an instant overview of Lavia’s qualities when in possession. 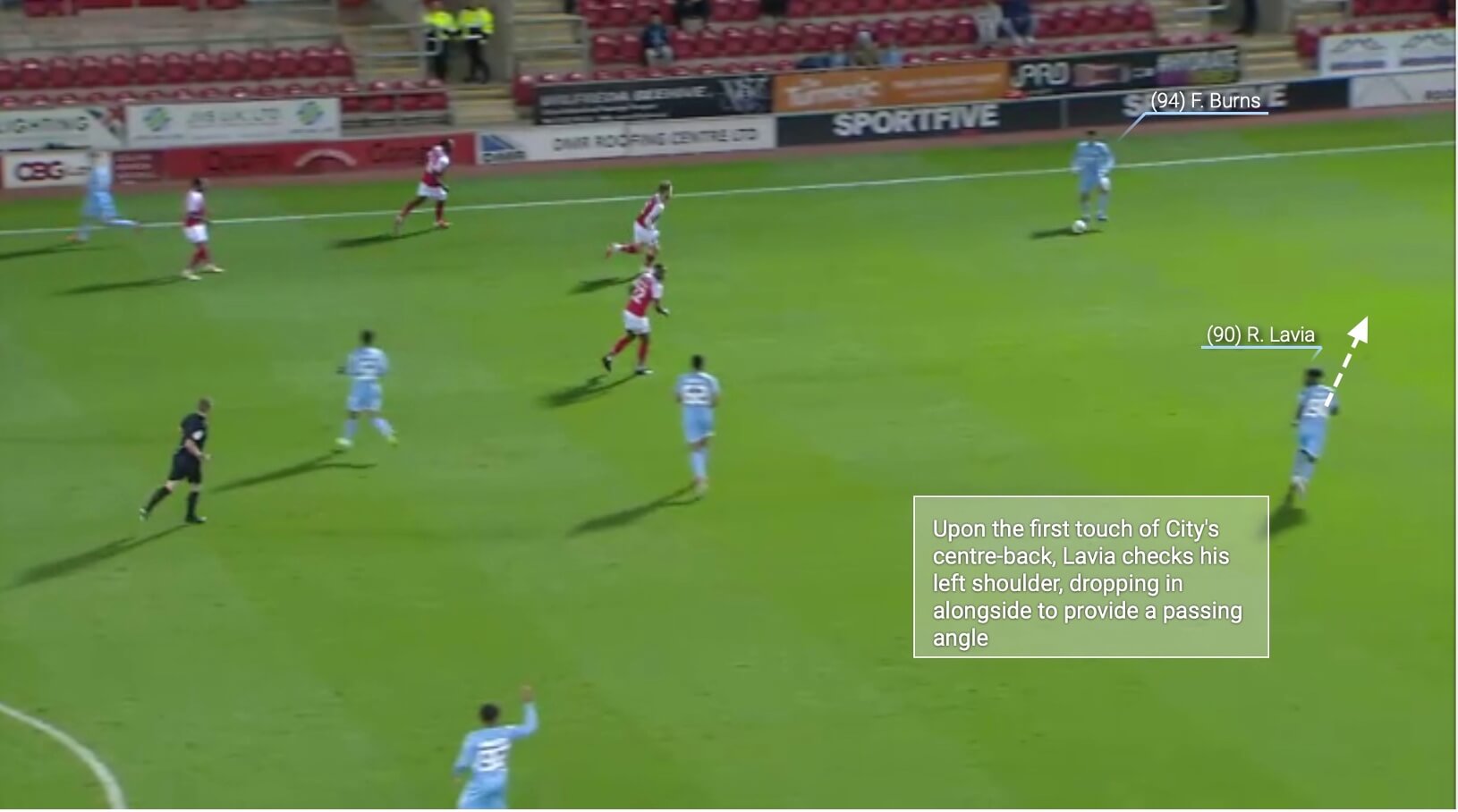 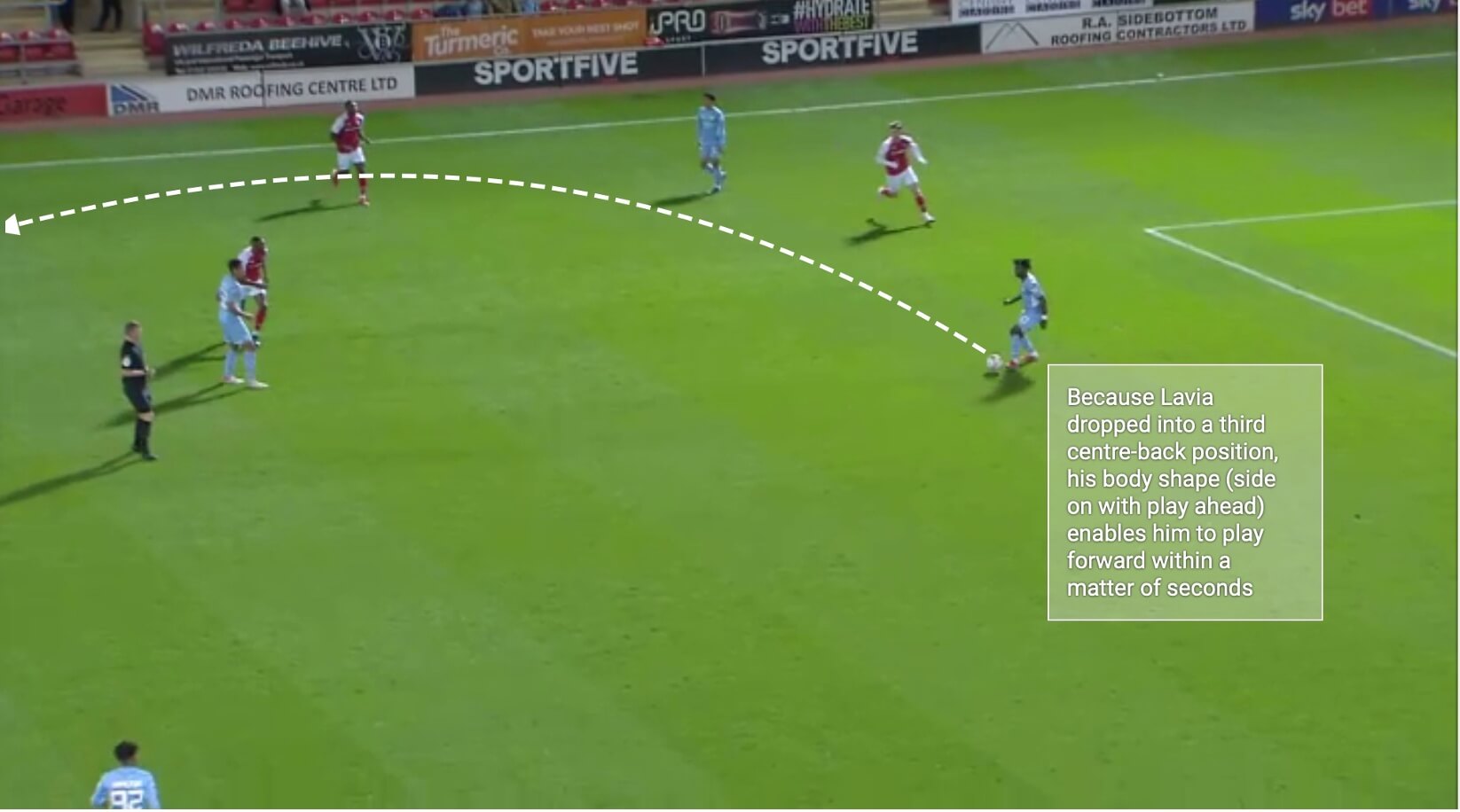 In theory, Lavia’s proficiency in operating as a third centre-back on the fly (he has also played in the position outright in the past) will add flexibility to Hasenhuttl’s favoured 4-2-2-2. This may mean the system, at times, appears a quasi 3-5-2 in possession, with the full-backs encouraged to push higher and wider. While Hasenhuttl has attempted this with Romeu in the past, the Spaniard can lack the mobility to manage large spaces and is most inclined to remain static in possession. In short, Romeu offers a certain level of control but handicaps dynamism in central areas.

How Lavia protects the ball draws parallels with Paul Pogba, despite being four inches smaller at 5ft 9in. His languid upper body movement and an elongated step pattern seem highly effective in evading pressure and dribbling at speed. This, again, should provide an extra element to Southampton in possession.

During Belgium Under-19s’ meeting with England in October 2021 (below), Lavia wins possession but is surrounded by three white shirts. Note the space behind him should he lose the ball. 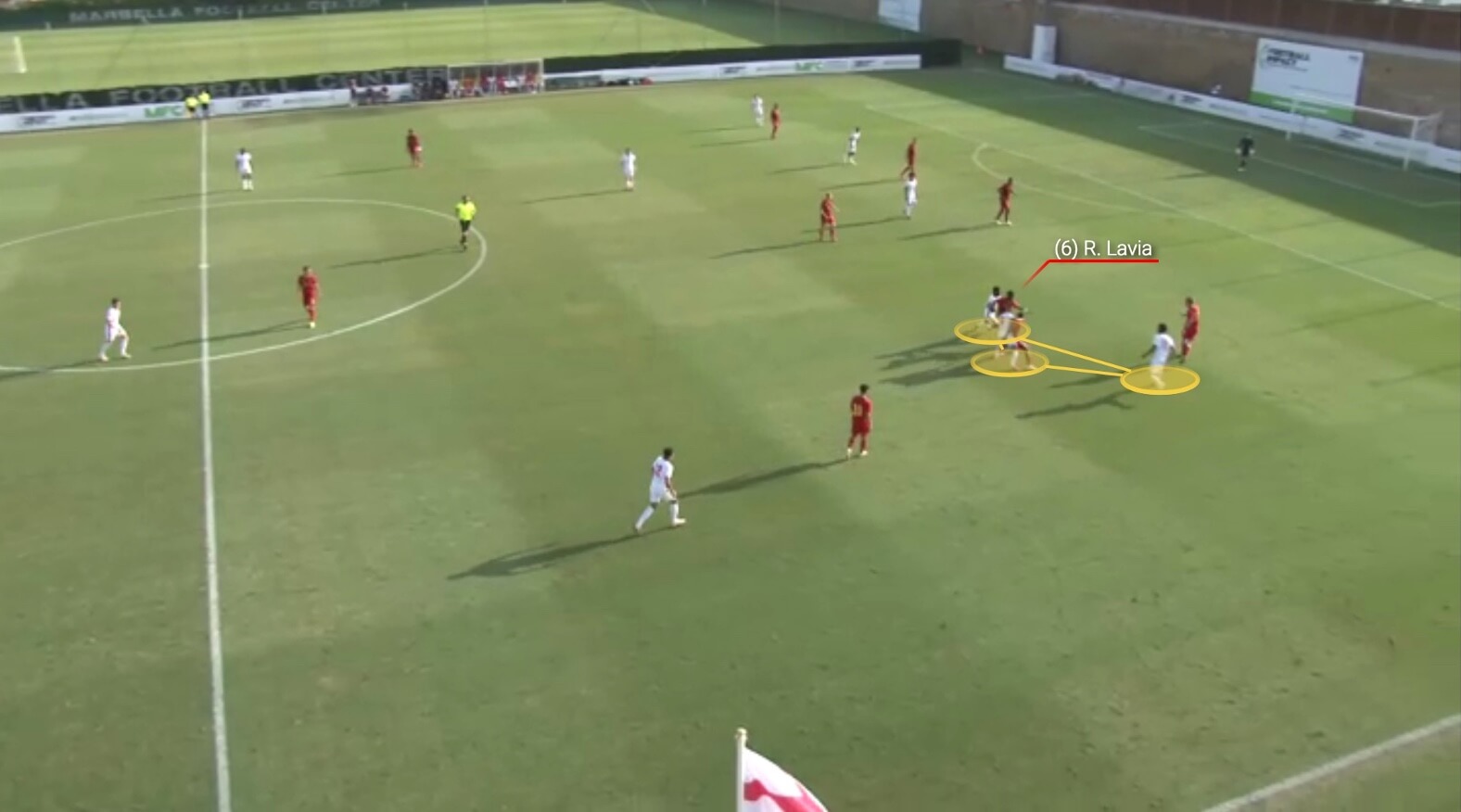 Using his left arm and back as a shield, Lavia spins away from pressure and advances towards England’s centre-backs, leading to a counter-attacking opportunity. 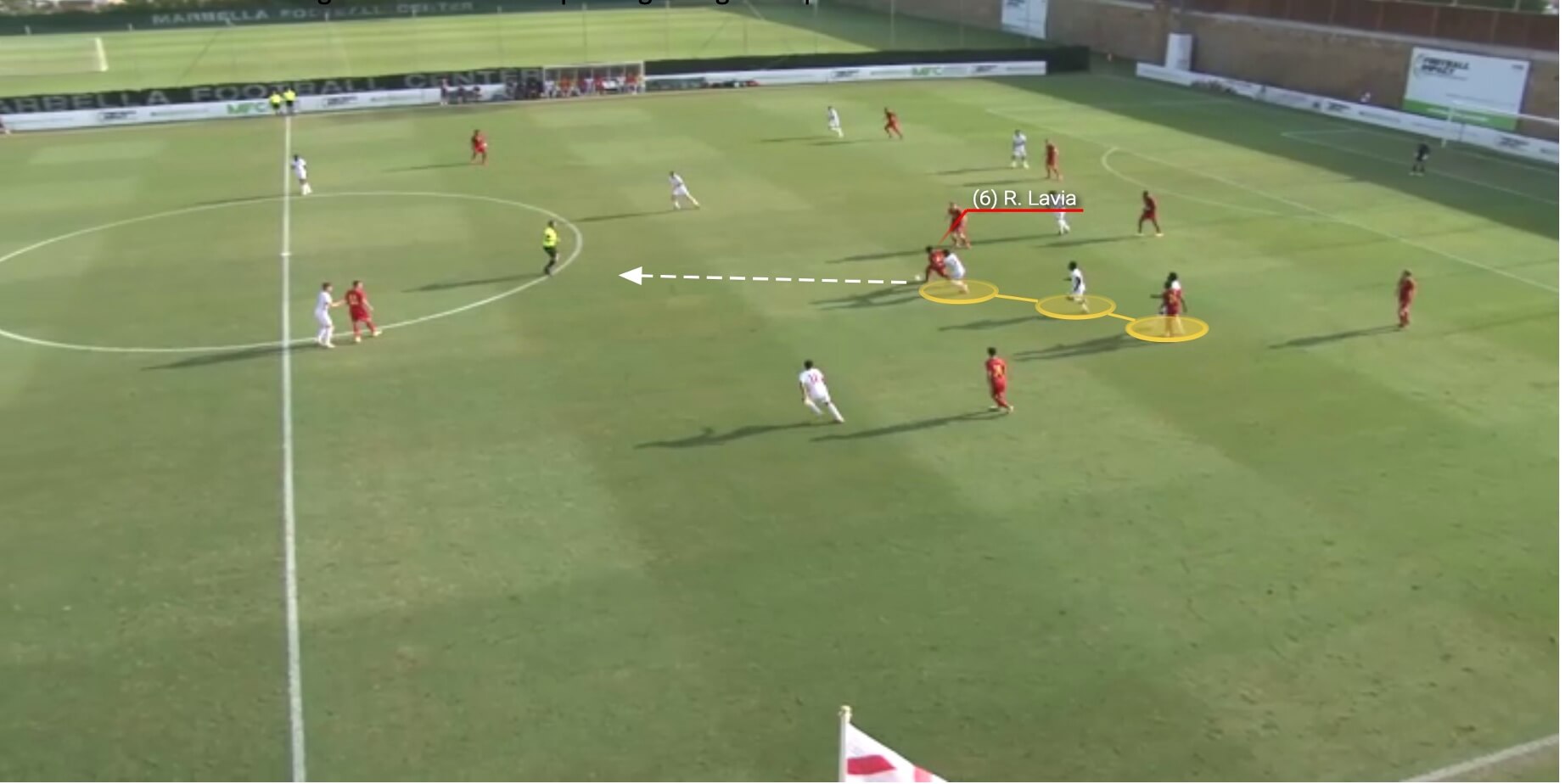 Lavia’s attitude — his first thought almost invariably is to look forward — should align with Hasenhuttl’s core principle: verticality. In his 30 appearances across all competitions last season, the Belgian made an average of 6.27 passes into the final third per game, with a success rate of 73.2 per cent.

Although there is scope for refinement, these metrics underline a player more than capable of performing line-breaking passes into congested areas, where the margin for error is dramatically reduced. Lavia also lost the ball less per 90 (6.45) than Romeu (8.97) last season. The data is caveated by the difference in competition they both faced, but even so it shows that the teenager is not quite as raw as his age and experience would suggest.

Out of possession, Romeu and Lavia are similarly aggressive, with the latter’s increased mobility often dictating his decision-making. A case in point comes in Belgium Under-19s’ game with Germany earlier this year.

A pass is played inside the pitch and Lavia opts to apply pressure to the player receiving, leaving his covering position and the opponent he had been marking. 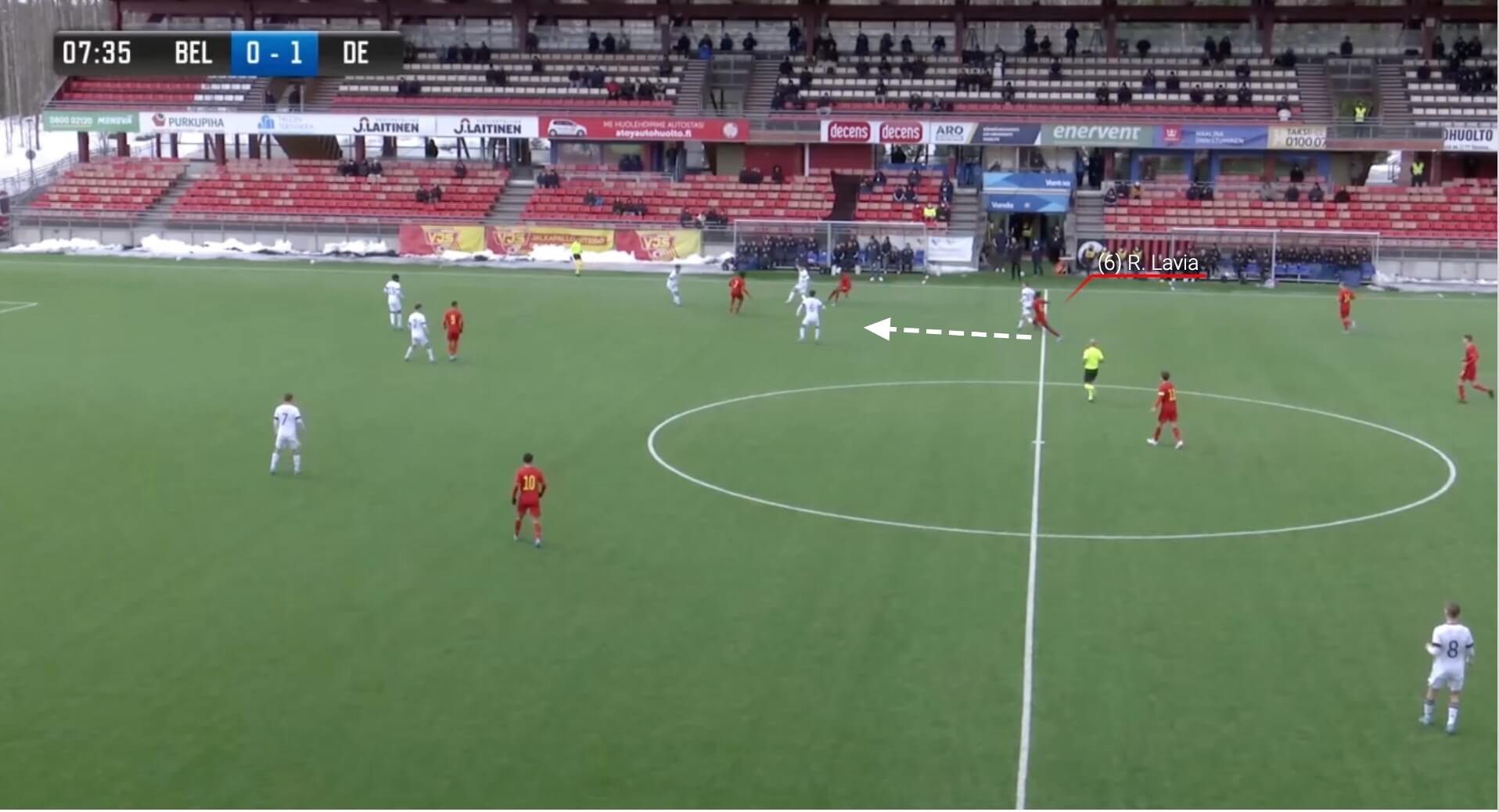 Due to the ability to close down effectively with pace, he forces the player on the ball backwards and into a restricted area of the pitch. For context, the opponent Lavia was initially marking is circled yellow. 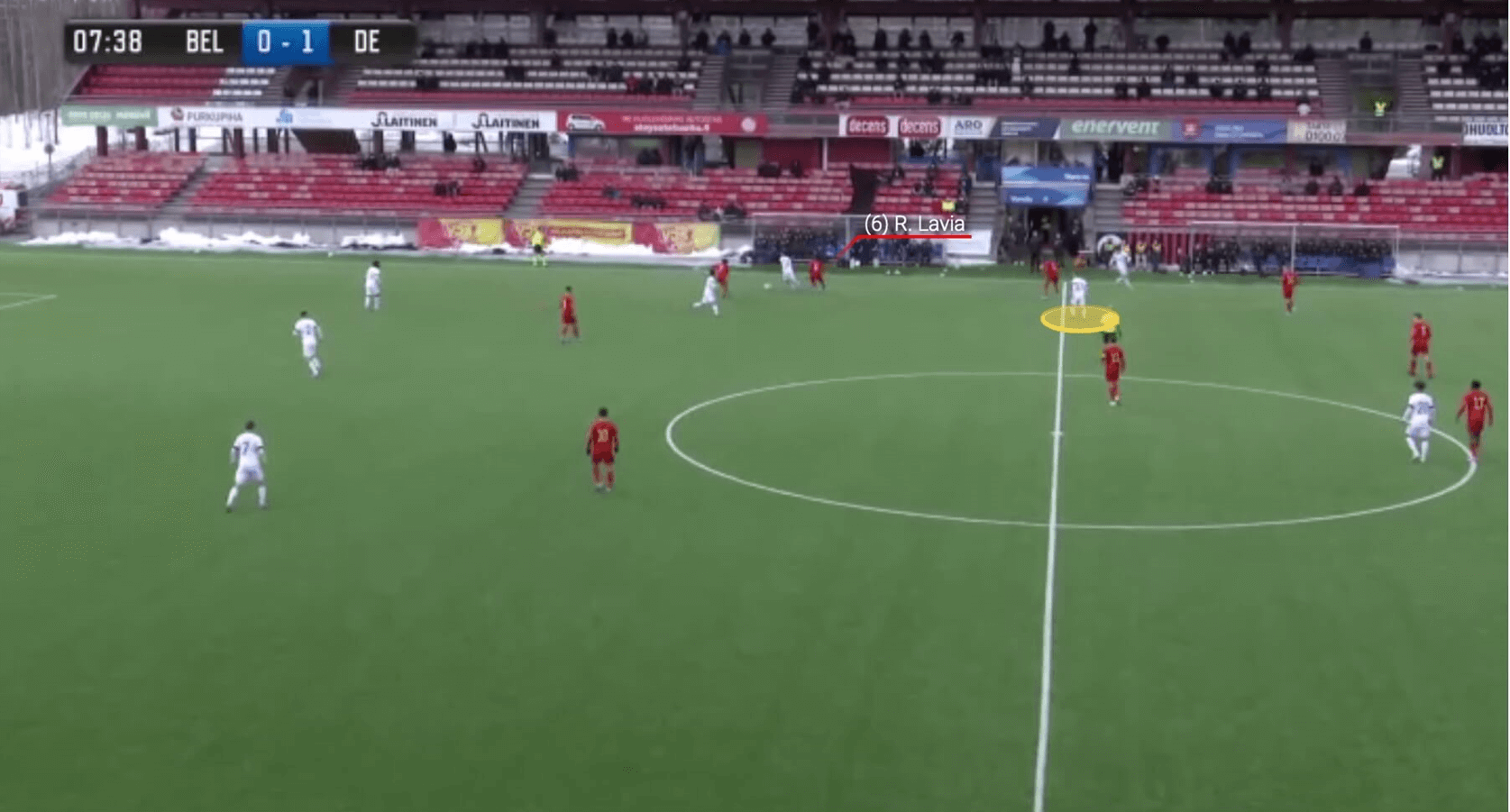 What makes Lavia such an appealing proposition is a lack of typecasting. The modern game has preferred to pigeonhole players into set positions and areas of the pitch, tasking them with executing a primary function. Yet it is Lavia’s varied, potentially all-encompassing skill set that chimes with what Hasenhuttl expects.

The Austrian always describes his two central midfielders as “No 6s” despite both being given responsibilities outside of the traditional description’s remit. Funnily enough, it is exactly what Lavia has grown up doing.