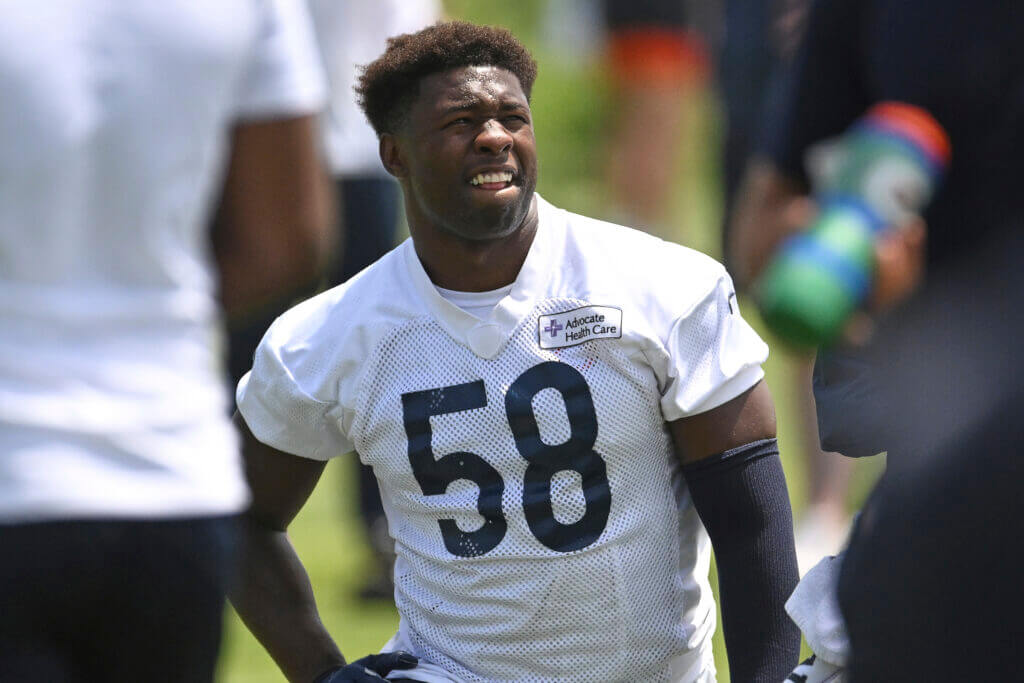 On Sunday, things looked cordial between the Bears and linebacker Roquan Smith. Inside the Walter Payton Center, Smith strolled the near sideline after working with the trainers and ran into Ryan Poles.

The Bears’ new general manager stopped Smith, said hello, then patted him on the back before moving to watch a team drill during training camp.

How quickly things change in the NFL.

Two days later and hours before the Bears’ Family Fest at Soldier Field, Smith threw some mud at the organization. He intensified contract negotiations by releasing a statement through the NFL Network demanding a trade. It’s surely negotiating tactic. Smith, who is officially on the physically unable to perform list, later joined his teammates on the sideline for the public practice at Soldier Field.

The fans got to see the Bears’ best player, while Poles addressed the issue head-on after practice.

“I thought we’d be in a better situation to be completely honest with you,” Poles told reporters. “In terms of our philosophy in the front office, I’ve always believed and always will that we take care of our homegrown talent. We pay them. We take care of them. And we take care of them for what they’ve done and what they can become in the future.

“And with this situation, we’ve showed respect from a very early timeframe, and with that said, there’s record-setting pieces of this contract that I … thought (would) show him the respect that he deserves, and obviously that hasn’t been the case. With that said, we can’t lose sight that this isn’t about one player. My job is to build a roster that’s going to sustain success for a long period of time, and at the end of the day, we have to do what’s best for the Chicago Bears.”

There is plenty to discuss in my five takeaways column.

Will the differences matter?

Smith wouldn’t be the first player to demand a trade and later re-sign with his team. It just happened with 49ers receiver Deebo Samuel and Seahawks receiver DK Metcalf.

Smith’s situation is different, though.

No. 1: he’s representing himself. He fired Todd France and Brian Ayrault, two heavy hitters in the industry, two years ago.

“They have left me no choice than to request a trade that allows me to play for an organization that truly values what I bring to the table,” he said in his statement.

It’s worth wondering if Smith is hearing some uncomfortable things about himself at the negotiating table when an agent would normally handle such things.

Poles acknowledged as much.

“It’s difficult,” he said. “There’s emotions involved, and it’s tough. It’s a very unique situation that we’ve had to deal with, and I thought we’ve done a pretty good job, which again, that’s why I’m a little disappointed that we’re at this spot.”

No. 2: Neither Samuel nor Metcalf are caught up in a rebuild run by a first-year GM and a first-year coach. Samuel and Metcalf re-signed with the coaches and GMs who drafted them.

That’s not to say that Poles and coach Matt Eberflus don’t want to retain Smith. They do. Poles reiterated that on Tuesday. They’ve spoken very highly of Smith since their arrival, but tough decisions and tough departures are often a reality in rebuilds.

Calling out the McCaskey family

Smith mentioned the McCaskey family toward the end of his statement: “I haven’t had the chance to talk to the McCaskey family, and maybe they can salvage this, but as of right now I don’t see a path back to the organization I truly love.”

It’s a peculiar move. Chairman George McCaskey is very accessible. Just ask all the Bears fans who have interacted with him at camp. Reporters have talked to him, too.

If Smith really wanted to talk to McCaskey, it could easily be arranged.

Smith might not hear what he wants to hear, though. Don’t forget about the Bears’ new organizational structure. Poles reports directly to McCaskey, not to a team president. In other words, McCaskey surely knows what Poles has offered Smith.

And McCaskey is likely to back Poles, his handpicked GM. He didn’t stop Poles from trading Khalil Mack.

McCaskey also said at the NFL owners’ meetings that he was impressed by Poles’ discipline when it came to his spending in free agency — words that bear repeating now.

“He was very calculated in how he assessed various players that were available as unrestricted free agents and the limit financially that he was willing to go to with each player,” McCaskey said in March. “He stuck to his plan and I was impressed with that.”

There are only two contracts worth highlighting, and they were signed by two of the best linebackers in the NFL last year: the 49ers’ Fred Warner and the Colts’ Shaquille Leonard.

All details below are provided by Spotrac. Both deals include potential affordable exit points for the 49ers and Colts in 2024.

The question is where Smith fits with them. Does Smith want to reset the market and become the highest-paid linebacker in the NFL? Are the Bears willing to offer him a $100 million contract? Do they value linebackers that much in today’s NFL?

As Poles said, there were “record-setting” parts included in their offer to Smith.

But it didn’t work.

Smith shared some harsh words about the Bears’ front office in his statement. The NFL Network reported that there are de-escalators included in the Bears’ offer.

“The deal sent to me is one that would be bad for myself, and for the entire LB market if I signed it,” Smith said. “I’ve been trying to get something done that’s fair since April, but their focus has been on trying to take advantage of me.”

There are statistics floating around on social media about where Smith fits among some of the all-time great linebackers. Smith made sure to mention Wilber Marshall, Dick Butkus, Mike Singletary, Lance Briggs and Brian Urlacher in his statement, too.

But comparisons in negotiations should still be limited to the present. And they should start and end with Leonard and Warner.

Leonard is the most decorated of the three linebackers. The 36th pick in 2018, Leonard was voted to three consecutive Pro Bowls and earned first-team All-Pro honors the past two seasons. He also was the defensive rookie of the year in 2018.

Smith, the No. 8 selection in 2018, was second-team All-Pro in each of the past two seasons. Warner, the 70th overall pick in the same year as Smith and Leonard, was first-team All-Pro and a Pro Bowler in 2020.

There are advanced metrics that favor Smith. He led the NFL in Football Outsiders’ “stops” metric with 93. Stops are defined as tackles, assists or pass breakups that stopped an offensive play short of success.

The star LB just requested a trade from the Bears. pic.twitter.com/DmAL3BGRw2

Smith’s pass-coverage stats also separate him from Leonard and Warner.

According to Pro Football Reference, Smith has allowed only two touchdowns in coverage, both in his rookie season. Leonard has allowed nine touchdowns; Warner 10. Over the last three seasons, opposing quarterbacks have averaged 75.9, 59.6 and 76.8 passer ratings when throwing at Smith.

The past, present and future

What Smith has done in the past has its limits, though. The Bears still need to see what Smith can do in Eberflus’ defense. They truly they don’t know; they can only project it.

As Poles highlighted Tuesday, the future always is considered with extensions.

“It’s got to make sense with both sides,” he said.

This is another notable difference for Smith, one that could be factoring into the slowness of negotiations.

The Bears have plenty of cap space for 2023, but there is some uncertainty when it comes to retaining a player who starred in a different scheme and for different coaches. The 49ers and Colts knew exactly where Warner and Leonard fit into their defensive systems and what they mean to their teams when they re-signed him.

Smith is caught up in the Bears’ rebuild. Things could be different for him if Ryan Pace and Matt Nagy were still in charge. Instead, his contract negotiations have become an early test for Poles.

Before Smith’s hold-in began, he was playing weakside linebacker for Eberflus and defensive coordinator Alan Williams, which is the role once held by Briggs in Lovie Smith’s defense. Smith’s speed makes him a potential fit for the position, but it’s only a projection. Smith hasn’t played one game in Eberflus’ defense.