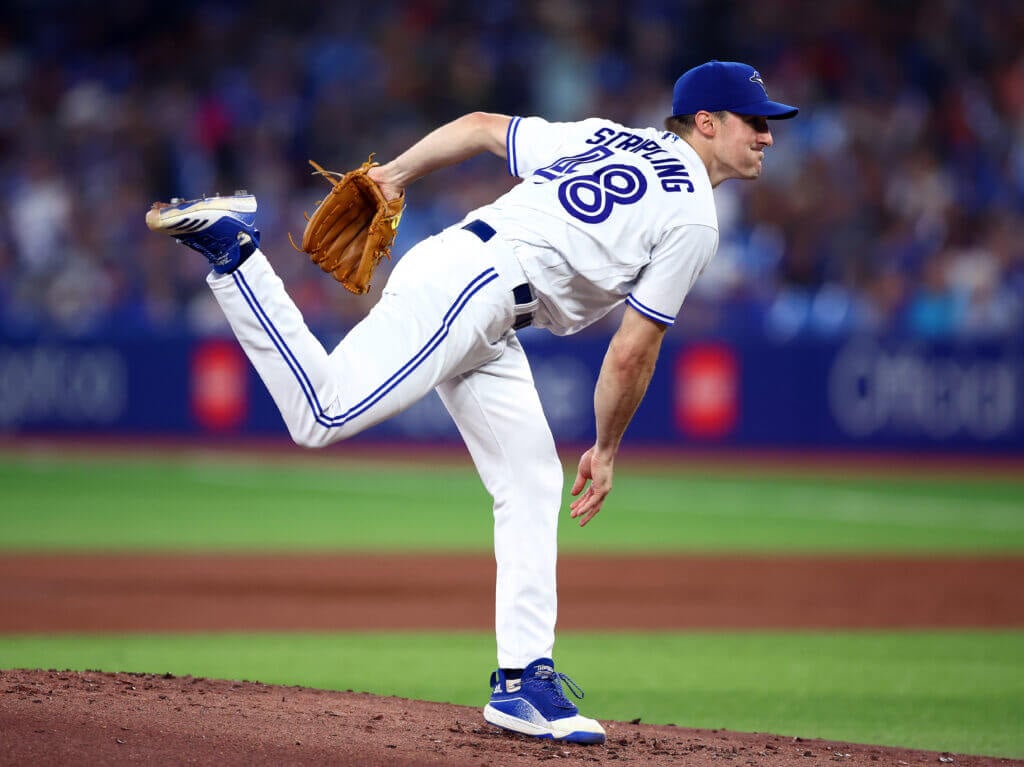 That was the sensation for the Blue Jays after a cathartic 6-1 win Wednesday over the Baltimore Orioles, halting the three-game losing streak and securing a morale-boosting victory.

The win was a team effort with starter Ross Stripling flirting with a perfect game — it was broken up in the seventh — the bullpen keeping things in check and the lineup finally stringing together the sort of multirun outburst (thanks to big hits from George Springer, Santiago Espinal and Alejandro Kirk) that had been eluding them during their recent slump.

The win kept the Blue Jays in the wild-card picture, sitting in the third spot, up a game on the Minnesota Twins. The Orioles sit 1 1/2 games back. More importantly, it gave the team something it can hope to build upon as it heads out for a crucial seven-game road trip to New York and Boston.

“Hopefully, it lets guys just breathe and understand that you can do it,” said Springer, who hit a pinch-hit RBI single in the seventh inning that kept the rally going. “Because at times when you don’t do it, you start to think that you can’t do it and then all of a sudden it happens.”

Through the first six innings, with the Blue Jays mustering just two hits, this game felt a lot like all the others they had been playing over the last week, when runs were surprisingly hard to come by for an offence that profiles as one of the best in the league.

But, on the mound, Stripling was giving his team every chance for late-inning scoring heroics by spinning a perfect game for six innings. With his team in need of a big performance, the right-hander, fresh off the injured list, came out against the Orioles and shoved. The 32-year-old retired the first 18 batters he faced in dominant fashion in perhaps his best start in what’s already been a phenomenal year.

“It was everything that our team needed and more,” Springer said. “He was incredible, the way he operated today. He mixed all 55 of his pitches that he has, and he was unbelievable today.”

“We were joking you can call him Bob Ross Stripling today, he was painting,” added Blue Jays manager John Schneider. “When you get an effort like that, I think it just puts the bullpen in the right spot. He’s obviously a shot in the arm coming back off the IL. He was absolutely fantastic.”

Having not made a start since July 30, Stripling was slated for about 75 pitches or so. He was efficient, needing only six pitches to retire the first three batters. Through four innings, Stripling was at 45 pitches, almost of quarter of which (11) were thrown to Orioles outfielder Austin Hays in his second-inning at-bat, which ended with a strikeout. Stripling’s changeup, in particular, was great, generating six whiffs on 10 swings.

Until the fifth inning, Stripling said it was business as usual for him. But, after he finished the fifth without allowing a base runner, thoughts of throwing a perfect game crept into his head. Knowing he might be on a pitch count, Stripling wanted to remain economical. After all, he has firsthand experience of getting pulled from a no-hitter. That happened in his MLB debut in 2016 with the Dodgers, who lifted him after 7 1/3 innings of no-hit baseball with 100 pitches thrown.

“I was aware of the situation and just kind of going out there and staying in attack mode and trying to stay efficient because I knew if anything was going to end it besides giving up a hit or whatever, it was going to be my pitch count,” Stripling said.

The Blue Jays have favoured using Stripling only two times through the order against opponents this year, but given the start he was having, Schneider let him keep pitching.

“You don’t get to see that very often,” the manager said.

So, Stripling returned for the seventh inning, at 67 pitches, facing the Orioles’ lineup for the third time. After discussing it with catcher Danny Jansen, Stripling decided to throw a first-pitch curveball to Cedric Mullins, hoping he wouldn’t swing at it and they could get ahead. But the Orioles centre fielder instead swung and flicked it into centre field for a single. As he turned to see the ball drop in the outfield, Stripling could only smirk.

The Blue Jays starter faced one more batter, Anthony Santander, and got him to ground out. After that, Schneider walked to the mound and Stripling assumed his day was done. His teammates congratulated him on his outing and, in Stripling’s words, he said he “shut it down,” and the weight a starter carries was lifted. So, he was surprised when his manager instead asked how he was feeling and if he wanted to face Ryan Mountcastle. The manager and pitcher shared a laugh as Stripling admitted that he’d mentally exited the outing already. He handed Schneider the ball and walked off to a standing ovation from the 40,141 at Rogers Centre.

“As a guy that has shut it down before and been asked to go back out or to finish an inning or whatever, it’s gone horribly probably 10 times out of 10, so I was honest there … and Schneids took the ball and went to Yimi (García), who did his job and kept a zero there,” said Stripling, who finished with 6 1/3 innings of one-hit baseball with seven strikeouts.

Had he not given up the single, however, Stripling wanted to stay in.

“I would have fought that tooth and nail to stay in there, for sure,” Stripling said. “Might have been taken out of my hands, but now 32 years old, who knows if I’ll ever get an opportunity like that ever again. You would have had to drag me off the mound.”

With García coming in to face Mountcastle, the first baseman hit a chopper up the middle, but Bo Bichette made an excellent barehanded grab that saved a run from scoring.

“To me, that was the play the game,” Schneider said.

Indeed, had the Orioles scored and stolen some momentum, it could have changed the tides of the game. Instead, it was the Blue Jays who gained steam in the bottom of the frame. It all began with back-to-back singles from Teoscar Hernández and Bichette off Orioles reliever Joey Krehbiel. After the Orioles went to left-hander Cionel Pérez next, the Blue Jays countered with Springer as their pinch hitter. Coming off the bench previously, Springer had been 0-for-10 in these situations, but on Wednesday, he delivered with a single up that middle that drove in the Blue Jays’ first run of the game. It was also Springer’s 1,000th career hit.

“I’ve pinch hit before and I haven’t really had success at it,” Springer said. “I mean, it’s hard and I have a lot of respect for guys who can just come off the bench like that and succeed so, I knew who I would face, just went and got ready, and if the moment came, hopefully, I was prepared enough to succeed and I was able to hit one up the middle.”

Espinal followed with a two-RBI double to right-centre field that felt like it lifted a weight off the Blue Jays — including Springer, who let out a huge roar as he slid safely into home plate. The lineup continued to put up quality at-bats in the inning with a pair of walks, including a bases-loaded one from Lourdes Gurriel Jr., before Kirk delivered the big blow with a two-RBI double of his own that put the Blue Jays up 6-0.

“We have that kind of offence,” Schneider said. “Big hit by George, big hit by Espi and Gurriel’s base-loaded walk to keep the line moving and Kirky coming through, so it can happen quick. And sometimes it just takes that one inning and that was an awesome approach by everyone.”

The way things have been going offensively, a big inning felt like it was needed. After the six-run output, the energy instantly lifted in the home team’s dugout. Now that some pressure is perhaps off them, the key for Toronto will be bottling up that energy and reserving it for their big four-game series against the Yankees, who have similarly been slumping offensively. The seventh inning reminded us what the Blue Jays are capable of. Now, they have to keep doing it consistently.

“Hopefully it carries over a little bit going into a really big series in New York,” Schneider said. “These guys, they’re confident and I think one inning, one game like that can really turn the tides a little bit and get us rolling.”