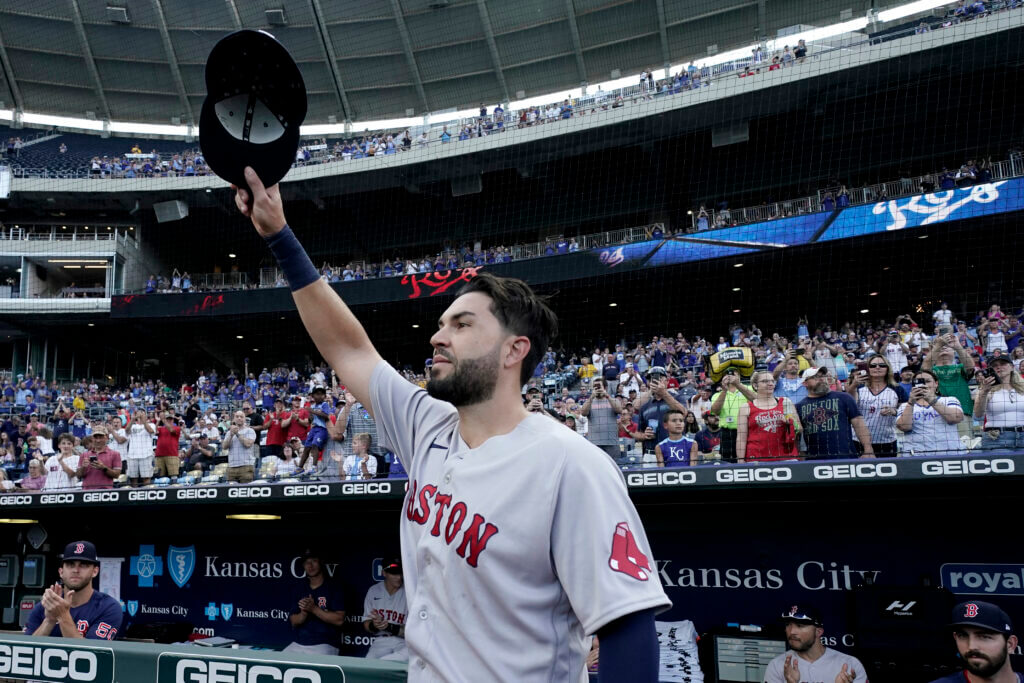 KANSAS CITY, Mo. — The first framed photograph you see when you step into the hallway outside the visiting clubhouse at Kauffman Stadium is an image that features confetti.

The image depicts a parade. The parade. If you live in Kansas City, you were likely there, standing before Union Station, celebrating the Royals’ 2015 World Series victory.

And on Thursday afternoon, for the first time since he left in 2018, Eric Hosmer, one of the central figures in the photo and of the era, stepped out of the visiting clubhouse and into the past.

“It feels like a long time since I’ve been back here,” Hosmer said. “And it feels good.”

Sitting at a table before media members, Hosmer expressed his unequivocal appreciation for the city, the fan base and the organization. His actions throughout the evening underscored his gratitude.

When Royals color commentator Rex Hudler slipped inside the interview room, spotted Hosmer and raised his arms in the air with his palms flat — “I was raising the roof!” Hudler said later — Hosmer smiled.

“There’s Uncle Hud back there,” Hosmer quipped. “He hasn’t changed at all.”

Between batting practice sessions on the field before the Royals’ 7-3 victory, Hosmer chitchatted with manager of groundskeeping Jonnie Reed. After Hosmer pulled a flyball up into the seats beyond the right-field bullpen, he laid his bat down and motioned over to Royals replay coordinator Bill Duplissea. Before Hosmer exited the field, he scribbled autographs for multiple young kids in Royals jerseys behind home plate.

These scenes were expected before the season but not in early August. Originally, Hosmer, who began the season with San Diego, planned to be in Kansas City with the Padres for a three-game series in late August. Those plans changed when Hosmer was traded to the Boston Red Sox.

That is what had him standing on the top step of the visitor’s dugout Thursday night at Kauffman Stadium, watching video clips on the Crown Vision highlighting some of the most special moments of his baseball life.

My favorite image from the @royals game tonight. I hope everyone has a teammate or someone in their life like Salvy. Guy’s incredible as a ball player and a human. pic.twitter.com/LDVg7DQvKH

He went 0 for 3 with a walk on Thursday, but his return provided the opportunity for reflection, and not just for Hosmer. Earlier in the day, Dayton Moore, the Royals president of baseball operations, said it seemed “just like yesterday” that the club was drafting Hosmer, signing him, and watching his debut. The reflections also had Moore thinking back to the arc of the World Series-winning team, and how it relates to the present.

Almost seven years since Hosmer dashed madly toward home plate for one of the defining moments of the city’s baseball history, the same group of Royals executives has constructed a roster with a group of similarly-aged young players.

There are more pitchers in this group: the likes of Brady Singer, Daniel Lynch, Kris Bubic, etc. But there is a similar feel to the collection of position-playing prospects such as Bobby Witt Jr., MJ Melendez, Vinnie Pasquantino, Nick Pratto, Michael Massey and others who were hyped as they rose through the system.

Some of their debuts did not come as quickly as some fans wanted. And they have not won as much as fans expected from the beginning, which for many has tested patience. These were all feelings that also existed amid the lead-up to 2014. That Hosmer returned on a night the Royals started five hitters age 25 and younger seemed poetic.

“This league is tough to figure out, and it’s tough to figure out on your own,” Hosmer said Thursday, drifting back to his big-league beginnings. “When you do it with a group of guys you grow up with and get called up at the same time and win, it’s really special.”

As Royals fans are well aware, the formula that led to the parade picture framed in the bowels of Kauffman Stadium began with the draft. The club snagged Alex Gordon in 2005, Luke Hochevar in 2006 and Mike Moustakas in 2007, envisioning a core group with all three.

The Royals hoped to add a player to that trio in 2008. From the first time Moore saw a high school-aged Hosmer, he was convinced. “I felt that day, as did others, that he would win a Gold Glove award at first base,” Moore said Thursday. “You knew that immediately.” Hosmer’s magnetism on the field resonated further. Moore said Thursday he noticed how distinctly Hosmer’s teammates gravitated toward him

The night of the draft, Moore told reporters: “It really doesn’t take a keen scouting judgment or eye to walk in a ballpark on any given night, no matter who’s playing, and look at Eric Hosmer and know that he’s the best player on the field.”

Signing the Scott Boras-represented 18-year-old, though, was not easy. Moore recalled those conversations Thursday and said the club agreed to terms with Hosmer in 2008 minutes before the deadline. By 2010, Hosmer was putting up eye-popping numbers in Double A. His arrival, as well as the debuts of Gordon, Hochevar and Moustakas signaled what the Royals’ front office termed, “Operation flip the switch.”

For a few years, the lights essentially flickered. You could see glimpses of what the collection of talent was capable of, but consistent winning took time. The lag was such that in July 2014, before the Royals were about to embark on a viscerally memorable run, one Kansas City Star sports columnist wrote: “This team should be better. By now, this should be a winner, not a team trying to win.”

Two months later, baseball happened. The team with a group of hardened players rose to the occasion against the Oakland Athletics. Salvador Perez — whom Hosmer mentioned Thursday: “This is Salvy’s team, his stadium, the guy this team is built around” — lined a ball into left field, securing the walk-off victory in the 2014 A.L. wild-card game and cementing their belief.

“I still think it’s one of the better games that was played in the playoffs in baseball history,” Hosmer said.

That Royals team steamrolled its way to the World Series and lost in Game 7 against the San Francisco Giants. On Thursday, Hosmer recalled sitting in the dugout at Kauffman Stadium afterward, in front of the 40,535 fans, and hearing their chants.

“That was a key moment,” he said. “Just hearing that message and understanding how proud they were.”

The Royals team reciprocated that appreciation the following year with a World Series title, capped by an instinctive move by Hosmer, who had been standing on third base, to test the arm of New York Mets first baseman Lucas Duda. (Current Royals hitting coach Alec Zumwalt, who stood in the dugout across from Hosmer on Thursday night, was an advance scout for the Royals at the time; Zumwalt had identified Duda’s iffy throwing ability the year prior in the playoffs).

“You heard it over and over again,” Hosmer said, “about how electric this place can be. About how much support we could get when we started winning. It lived up to every part of that.”

Hosmer was one of the best hitters on that 2015 Royals club. He batted .297, hit 18 home runs and drove in 93 RBI, while also winning one of his four Gold Glove Awards at first base. The Royals attempted to run it back the following couple of years, and Hosmer acknowledged Thursday that he thought the group would remain together forever. Business, though, intervened. Although multiple reports signaled that the Royals offered Hosmer a lucrative deal, he signed with the Padres in 2018, ending his Royals’ run. On Thursday, Moore recalled the situation.

“It was difficult,” he said. “We tried hard to get Hos. But we also understood the economics of the game. We did the best we could and came up short financially. It’s part of the game.”

After that, it was back to the theme of the night. To Hosmer’s return. To the ovation. To Hosmer tipping his cap. To the image of him walking up to the plate, and smiling at Salvador Perez.

“It was amazing,” Perez said. “Especially with the kind of person he is. He’s my brother. I’ve said that. But it’s good to see him playing back at The K with all the history we made.”

Yet, for as emotional as the scenes were, it was impossible not to think again about the poetry of the moment. Here was one of the Royals who instilled hope. Who navigated struggle. Who ultimately bathed in confetti. It took time. It tested patience. But the result was a parade. And for that, as the Royals’ young players learned Thursday night, whether Hosmer comes back next year or next decade, Kansas City will always embrace him as their own.