The New Orleans Saints are taking their summer break before training camp begins in late July, so what better time for a “way too early” 53-man roster projection?

The Saints always tinker with the roster in the first few weeks, with veteran running back Latavius Murray being a last-minute cut and cornerback Bradley Roby a new addition in September. That certainly could happen again this year, although the Saints don’t have the major roster holes they were facing a year ago.

Here’s how the roster could look during the first week of the season:

Saints coach Dennis Allen said he sees former quarterback Taysom Hill moving back into his hybrid role this season, which essentially means he probably won’t be in the rotation of backup quarterbacks. Hill could still be listed as a quarterback, but we won’t know until he gets back on the field during training camp or beyond.

So for now, I’m moving Hill out of the quarterbacks group and going with the trio we’ve seen during OTAs and minicamp, with Winston as the starter, Dalton as the backup and Book as the third man on the roster. The Saints may try to get Book on the practice squad this year, but we’re projecting what the 53-man roster will look like in Week 1, and Book is likely to be on it. 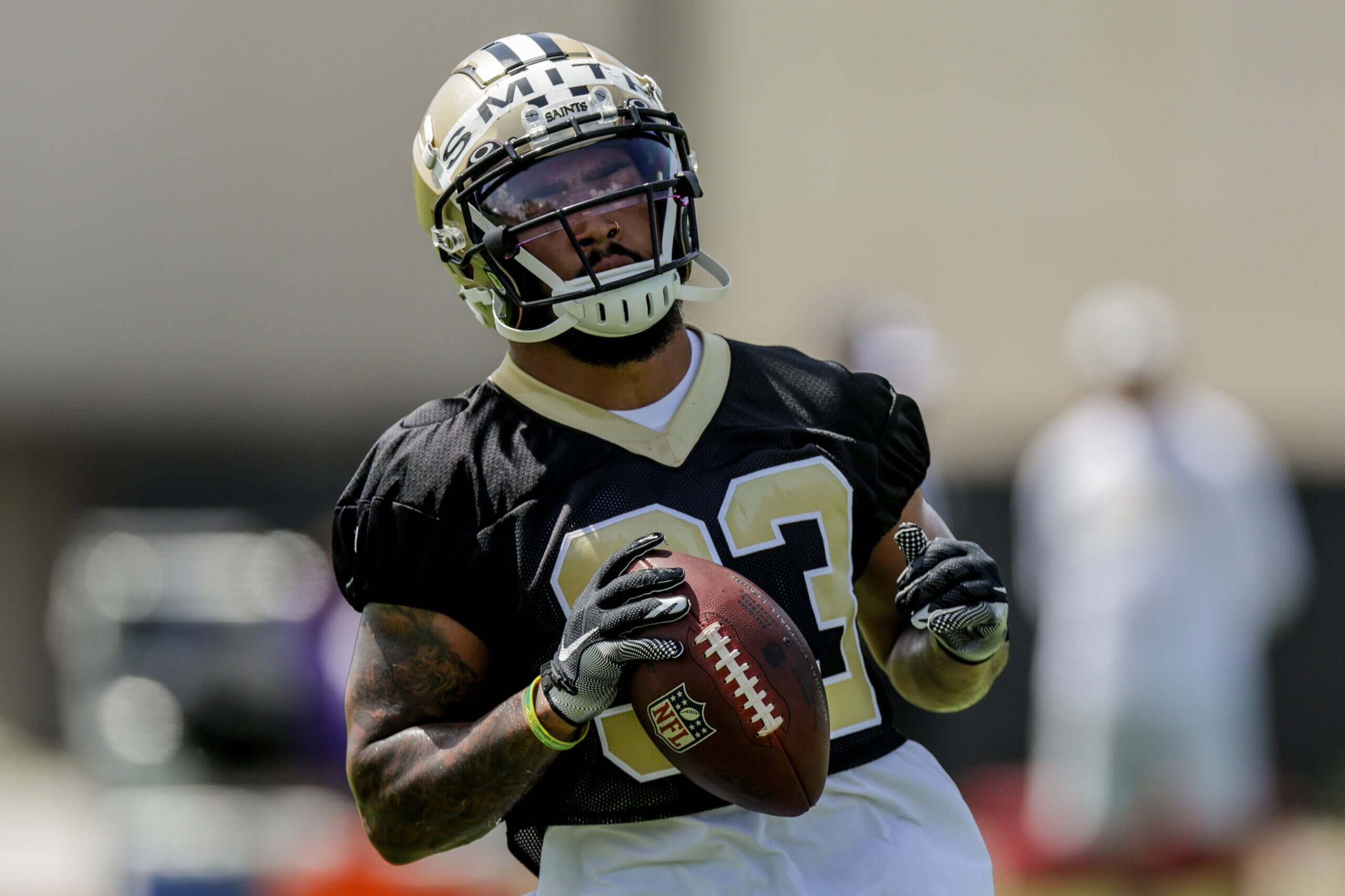 Smith is by no means a lock here, so his inclusion is based on potential. He would need to beat out Tony Jones Jr., who had a good preseason last summer but never translated that to the regular season. Things could certainly change based on Kamara’s availability and potential suspension, but it would be surprising if Ingram ended up a roster casualty like last year’s veteran running backs.

Washington sticks around for his special teams play, and though the Saints typically add a fullback, it doesn’t necessarily mean they’ll have one on the roster Week 1. Adam Prentice is fullback on the roster for now, but those things tend to change.

The position group that struggled the most last season suddenly seems pretty set, and players who got extensive snaps in 2021 might not even be active every week. Naturally this all depends on the health of certain players, particularly Thomas. It’s hard to know when he will be back on the field or what that might look like, but if he’s healthy, he’ll assume a starting role again next to newcomers Olave and Landry.

Saints rookie WR Chris Olave had another highlight in 7-on-7 drills when he caught a pass intended for another receiver that was batted up by the defender and floated in the air for a few seconds. Kind of like the “Immaculate Reception” with much lower stakes. https://t.co/vYrhjj56h4

The Saints have gone with as few as two tight ends, likely because of Hill’s ability to be used at that spot, and if the position had to be cut from four to three, Johnson would probably be the odd man out. For now Johnson stays on the roster ahead of undrafted rookie Lucas Krull, but the two may compete for the final spot. It’s also possible that Hill’s return from a Lisfranc injury keeps him out of the lineup for a while, which would shake things up even more.

This is basically the same list as last season, with the addition of Penning and the departure of Terron Armstead. Look for reserves Forrest Lamp and Ethan Greenidge to potentially stick around on the practice squad or fill in on a rotational basis. If 2022 is anything like last season, the Saints will need their reserves badly. If the Saints go light at other positions, they might keep nine players here.

Davenport was the last player put on this list because his status was so up in the air. Reading between the lines, it seems fairly likely he could start training camp on the physically unable to perform list after having part of his left pinky amputated, but remaining on the PUP list into the season would mean there were probably complications. Davenport stays on the 53-man roster for the sake of optimism, but his status will be something to watch over the next few weeks.

As for the rest of the players, the rookie Jackson and newcomer Street make the roster ahead of players like Malcolm Roach, Albert Huggins and Taco Charlton. Roach got a lot of playing time early last season but almost none after Onyemata returned, so he could certainly be a cut this season. 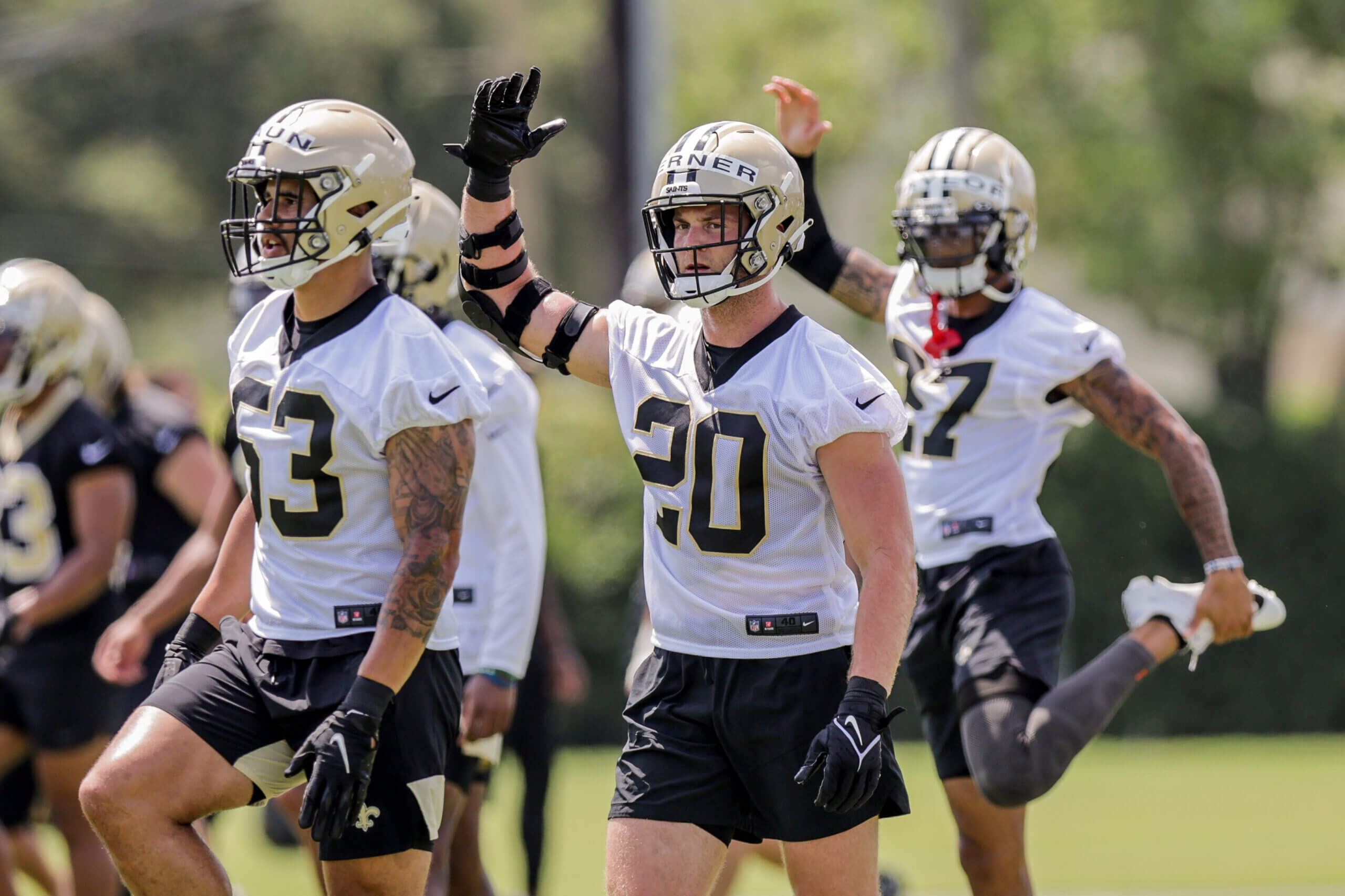 Pete Werner (20) is a staple at linebacker for the Saints. (Stephen Lew / USA Today)

The Saints are in nickel most of the time with Davis and Werner slotted as the two starters, and Elliss could play in base packages. Dowell and Baun play special teams, but I initially kept Baun off the roster. He’s staying on for now, but there’s certainly room for an undrafted rookie to take that final spot.

Perhaps this is recency bias, but Thompson, who was with the Saints last year on the practice squad, has been impressively consistent during OTAs and minicamp, and a good training camp could earn him a roster spot. Undrafted rookie Smoke Monday doesn’t make the cut here, but he’s still someone to watch during camp.

Veteran safety Daniel Sorenson, who signed a one-year deal with the Saints in free agency, isn’t on the initial list either, but it was a one-year deal without much guaranteed money, so the Saints aren’t obligated to keep him. Sorensen can play special teams, so his roster spot is probably going to come down to that. Maye is still working to return from a torn Achilles, but he’s one of the newcomers expected to start at safety this year along with Mathieu.

Fans would be thrilled if there are no changes to this trio in 2022. If everyone stays healthy, that’s certainly the plan, and with Lutz finally cleared after missing all of last season, let’s assume there aren’t any changes for now. The Saints have other kickers and punters on the roster, but these will be the three locked in at the end of the summer barring anything crazy.

Catching up with @Wil_Lutz5 on his excitement for the upcoming season 🙌 pic.twitter.com/iw2I2EiiIz

Ukraine and the EU: the urgent questions that remain over country’s survival