The new season is now underway, and Arsenal manager Mikel Arteta is most likely unsure quite what his best back four is. And that’s no bad thing.

In this 2-0 win over Crystal Palace, Arsenal recorded a clean sheet with a defensive unit that included two debutants. Familiar faces Gabriel and Ben White were joined by new boys William Saliba and Oleksandr Zinchenko, with the Frenchman named man of the match on his first competitive Arsenal appearance. Kieran Tierney came on as a substitute, while Takehiro Tomiyasu will shortly be available again after injury. Arsenal’s defence has more depth, and more quality — and that means Arteta faces more decisions.

That’s a situation the manager will welcome. Last season, Arsenal’s first choice quartet of Tierney, Gabriel, White and Tomiyasu was almost too established. They formed the foundation for Arsenal’s turnaround in form after a disastrous start, with Nuno Tavares sometimes deputising for Tierney. But when Arsenal sustained further injuries, the drop-off in quality became too great to sustain.

Now Arteta has options. The return of Saliba is as intriguing as it is exciting. What will it mean for last season’s partnership of Gabriel and White, which started the vast majority of Premier League games?

Although there were players making their official debut in Arsenal’s defence at Selhurst Park, there was still some familiarity to the selection. Arsenal have had a very stable pre-season and were able to select the same starting XI against Palace as in each of their last two friendlies.

Frenchman Saliba was an authoritative presence at the heart of the defence. After a fast start from Arsenal petered out, they relied on his assuredness to help protect their goal. There will be tougher tasks ahead, and consistency is the mark of the best centre-backs. Nevertheless, this was a very encouraging start.

“You don’t really see that at 21 years old,” marvelled Arteta after the game, “For a debut in the Premier League, against this opponent — where you face difficult players — and (to) resolve the situation the way he’s done it with that composure, with that calmness and with that presence. So big credit to the boy.”

With Tomiyasu absent, the ability to call upon Saliba meant White was deployed at right-back. It’s a position he stepped into occasionally last season, but with Saliba back, it’s possible he could feature there more regularly in 2022-23.

Against Palace, as through pre-season, White and Zinchenko played as inverted full-backs. When Arsenal had possession, they tucked infield to occupy central midfield, meaning Arsenal attacked in a 2-3-5 shape. That aspect of the role suits White — it means he can get on the ball as a deep-lying playmaker in central areas, which is where he’s most effective.

Of course, that means when the team lose possession, the opposition can send long diagonals in behind the full-backs. In this match, White found himself up against Wilfried Zaha, arguably one of the most challenging one-on-one opponents in the league. He occasionally looked stretched, but managed to make eight successful tackles in the game — the most any Arsenal player has made in a Premier League match since Lucas Torreira against Chelsea in 2019.

“He’s done really well,” Arteta said of White’s performance at full-back. “We know individually when you are so tight with (Zaha) how difficult it is to win the ball from him. He upsets you — the way he tries to play the game is really tricky and we have to discuss.

“Ben has the capacity to play in different positions and that’s a big plus for any player — and he really likes playing there.” 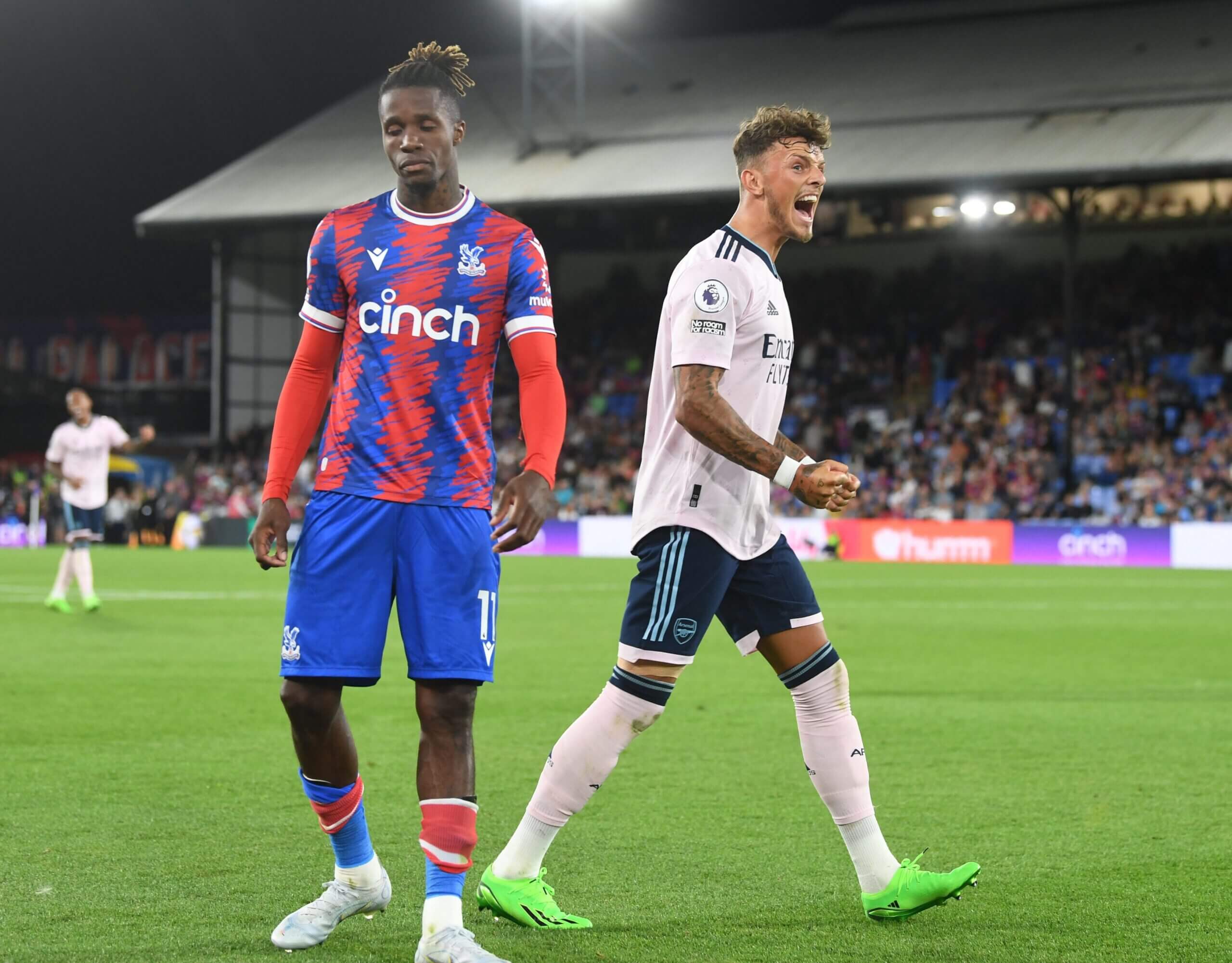 Ultimately, Arsenal won the battle on their right flank. When White was beaten, he had Saliba to back him up. On one occasion in the penalty box, Zava evaded White, before the 21-year-old intervened with an immaculate sliding tackle.

Another well-timed Saliba tackle on Zaha was so good that when the referee blew up, you almost presumed it was so he could trot over to the touchline and admire a replay. In reality, it was to bring play back for an earlier foul by Thomas Partey.

With the game finely poised at 1-0, Arteta brought Tierney on for Zinchenko after 83 minutes. The Scotsman, who came on in conjunction with the lively Eddie Nketiah, helped Arsenal push on to win by a two-goal margin. Rob Holding, so often a late substitute last season to help see out games, remained in reserve.

“When Kieran came on he was fantastic,” Arteta told the BBC after the game. “He hasn’t played in four months and when he came on he really helped the team to get the game closed.”

This was not a perfect defensive display. Palace had two very good chances, which fell to Odsonne Edouard and Eberechi Eze respectively. On both occasions, Aaron Ramsdale was able to divert the ball away from goal. When Arsenal’s defence was beaten, their goalkeeper saved them.

But it’s clear Arteta now has an interesting mix of components as he contemplates putting together his ideal back four. The likelihood is there will be a horses for courses approach: certain fixtures will suit Tierney and Tomiyasu more than Zincehnko and White. There’s also the Europa League to consider — Arsenal’s return to European competition means there’s more football to go around, and a measure of rotation will be necessary. Form and fitness will be determining factors in the manager’s selection.

What’s Arsenal’s best back four? Arteta may not know, and it may not matter either.

We Could Have Been Friends, My Father and I by Raja Shehadeh review – truth and memory in Palestine