To see broadcasters lose control is a rare thing indeed in modern football, but that is what happened in Gelsenkirchen last Saturday. As thousands of Schalke fans stormed the pitch to celebrate their team’s promotion to the Bundesliga, the smooth lines of the TV product were suddenly wiped away by glorious, stomach-churning chaos.

Sporting director Rouven Schroder’s post-match interview was interrupted mid-sentence when a fan insisted on leaning in to kiss him. When Schalke winger Darko Churlinov appeared on camera a few minutes later, his interviewer was put in a friendly headlock by an ultra in a balaclava. Churlinov, meanwhile, was robbed of his shin-pads.

A few metres down the touchline, Sky pundit Torsten Mattuschka asked a passing pitch invader what promotion meant to him, the man stared at him open-mouthed for a second and shouted: “Schalke is my life! It’s my life!”

He meant it as well. The club will rightly have to answer questions about the 18 people who were injured in the melee, but in truth, it was always going to be difficult to maintain control. At Schalke, the emotions are always a little more existential.

“It’s hard to put it into words,” Schalke’s board member Peter Knabel tells The Athletic. “Football clubs are always the pride of their city, but with Schalke, there’s always a bit more. More drama, more spectators, more power, but also more unemployment. We are talking about one of the poorest cities in Germany, so promotion is also about getting pride and dignity back. It sounds like an exaggeration, but if you walked around the streets here, you’d know what I mean.”

Few clubs in Europe are as important to their city and its identity. The last coal mine in Gelsenkirchen shut in 2000, and since then, it has been the football club that has kept the flame burning. On the promotion t-shirts the players wore last weekend, the slogan was “Gluckaufsteiger”, a play on the words of an old German miners’ greeting.

In the 21st century, Schalke has been the pride of this city. On membership figures, they are the second biggest club in Germany and the third biggest in Europe after Bayern Munich and Benfica. The last of their seven league titles came in 1958, five years before the first Bundesliga season, but three of their five domestic cup wins have come in the last 21 years. And with Borussia Dortmund, they have one of the fiercest local rivalries on the continent.

So when Schalke were relegated last year after 30 games in a row without a win, it was a body blow to that pride. 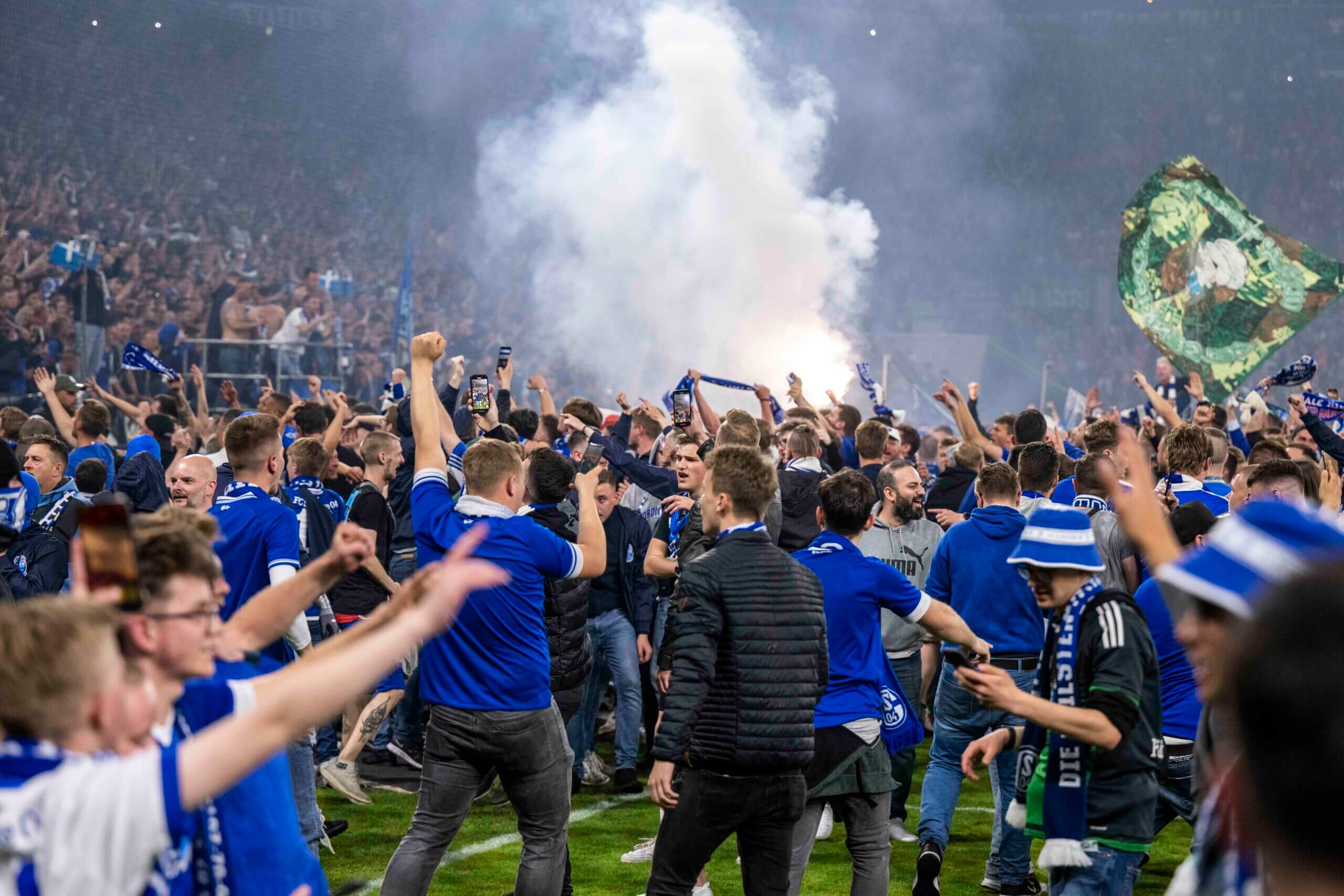 “It wasn’t like we just tripped up. We are talking about a full-blown crash landing,” says Knabel of his club’s 2020-21 season. With long-term financial issues, a crisis of leadership and a demoralised squad, he insists that it is impossible to overestimate the immensity of the task they faced last summer.

“You can imagine what the atmosphere was like at the club last year,” adds sporting director Schroder, who was drafted in after relegation. His job was not just to cut the inflated wage bill and pull together a strong second division squad, he says, but also to change the mood. “Slowly but surely, we managed to do that.”

But it was no easy task. The German second division has become notoriously difficult to get out of in recent years, and the league has rarely been stronger than it has been this season, with Schalke and Werder Bremen joining more established fallen giants Hamburg and Nuremberg last summer.

Schalke and Bremen are now on course to secure the two automatic promotion spots, but it has been a rollercoaster. Schalke were in fourth, six points adrift of the top, at the start of 2022, and it was only a change in the dugout that put them back on course.

In March, Dimitrios Grammozis was replaced by assistant coach Mike Buskens, a rather gruff local hero who had won the UEFA Cup with Schalke as a player in 1997. Since then, the side have won seven in eight, and can now be crowned Bundesliga 2 champions with a win against Nuremberg on Sunday.

“Mike is a Schalke legend, he knows this club better than anybody. He also has a sense of humour and the ability to pull people along with him. It was important to have someone like that who knew the club and the lads. We knew he would give everything he had for this club, and it worked brilliantly,” says Schroder.

Yet even in good hands, Schalke would not be Schalke without the drama. Last Saturday, they went 2-0 down against promotion-chasing St Pauli before sealing their return to the top flight with a dramatic three-goal comeback in the second half. When Rodrigo Salazar smashed in the winner in the 78th minute, all the pent-up frustration of recent years was released in one, half-hour burst of pure adrenaline.

Off the field too, the perpetual drama surrounding the club has not abated this season. In February, Schalke’s future was thrown into doubt as they, like the rest of Germany, were forced to confront their much-criticised relationship with Russian gas.

Gazprom, whose logo had adorned Schalke’s shirts for 15 years, had never been a popular sponsor. Fan groups had long campaigned for the end of the partnership, which was widely seen as the ultimate symbol of Kremlin soft power in Germany. For a club in a perpetual spiral of debt and overspending, however, it was also an economic lifeline.

Yet after February 24, all the money in the world could not have justified continuing to advertise for a company owned by the Russian state. Four days after Vladimir Putin’s troops marched into Ukraine, Schalke announced they were cutting ties with Gazprom.

The decision, says Knabel, had come together slowly as the geopolitical crisis began to heat up in January and February. “We tried to prepare ourselves for the situation by mapping out various scenarios and what our reaction to them should be. It was important to draw red lines, and then to decide quickly when they were crossed. We knew very quickly what we wanted to do,” he says.

Some said that the club did not act quickly enough, but Knabel insists that the decision couldn’t simply be made from one moment to the next.

“We had to make sure we didn’t endanger the survival of the club. We’re not talking about a little bit of money here, so we had to be sure we could afford to take this decision. But it was also clear to us that once those red lines were crossed, we had to find a way to afford it.”

The Gazprom deal was reportedly worth around €9 million a year to Schalke in the second tier, and double that in the top flight. Though the club were quick to sign new deals with a local property company and a nationwide supermarket chain, Bild newspaper recently estimated that these were worth only around a quarter of the Gazprom money.

“In this region, people help each other, and we are lucky that we found friends who helped us. It’s obviously a bit less than we had before, but we will be able to give our sporting director a competitive budget in the transfer market this summer,” says Knäbel, who insists the club are still on solid ground economically. 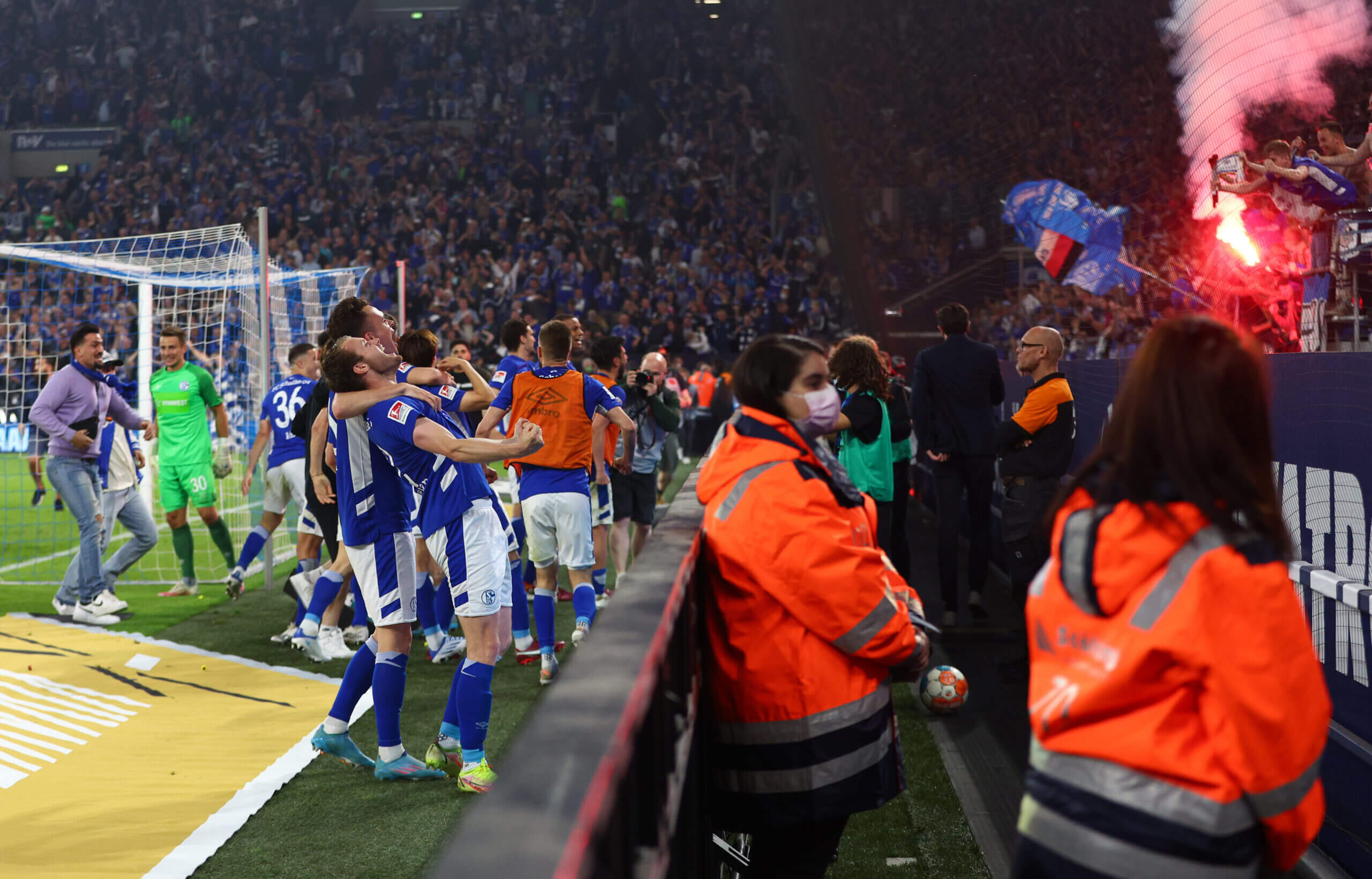 Schroder is full of praise for the way that the board handled the situation. “They managed to get it all done within a week and say look: this is the new Schalke. That was an important signal to the fanbase and the coaching and playing staff.”

It is, they will hope in Gelsenkirchen, the beginning of a new era. In the last 10 years, this was a club that had a controversial sponsor and a reputation for wastefulness. Under the leadership of Schroder and a new chief financial officer Christina Ruhl-Hamers, the club at least seems to be working more efficiently. The most recent financial figures showed that the club’s drastic cost-cutting measures since relegation have borne fruit, reducing their debt by around €33 million.

Yet it will still be a gruelling summer for Schroder, who now has to make his side Bundesliga-ready on a much tighter budget than he had imagined. As well as finding a long-term successor to interim coach Buskens, the sporting director needs to strengthen the squad while also potentially offloading expensive outcasts such as Salif Sane and returning loanees Ozan Kabak and Amine Harit.

He is, then, reluctant to get too carried away with the emotion of it all. Schalke may be one of the biggest clubs in the world, but they have learned their lessons from the drama of the last few years.

“I am convinced that we will get a good squad together, but we should also maintain our humility. Our motto so far has been less talking and more doing, and our sole aim next season is to stay in the league,” he says.

Hurricanes hyped for Game 7: ‘Saturday night in Raleighwood … we’re going to be buzzing’