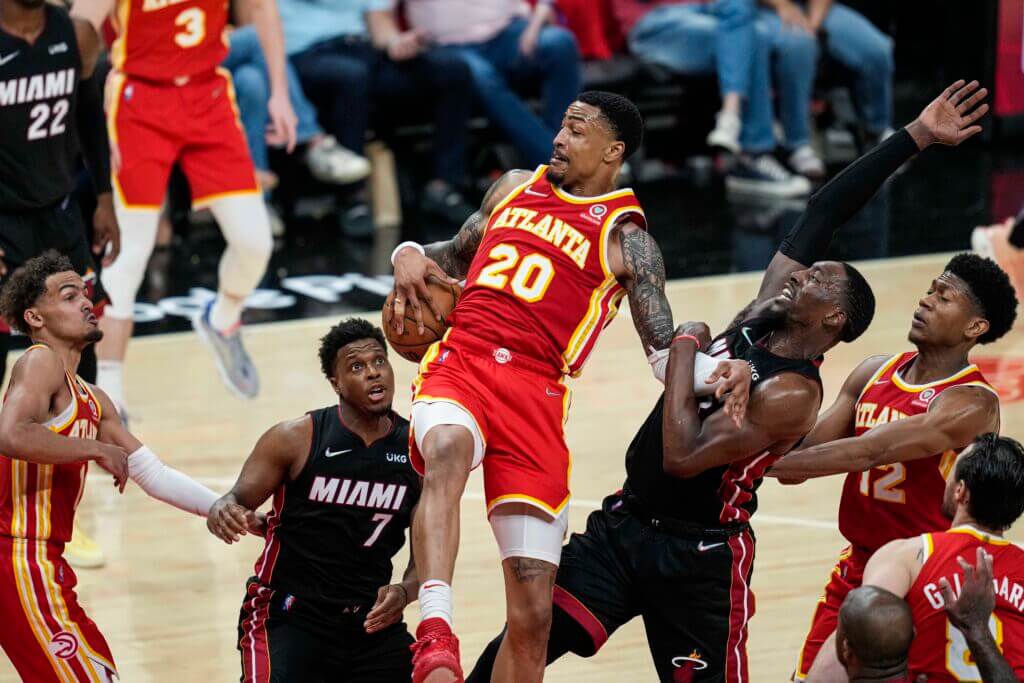 ATLANTA — The problem with NBA Drafts is they often tend to be misdirection plays.

Then there was that time back in 2006 when they drafted Shelden Williams fifth and devastated everybody by NOT trading him, which enabled then-general manager Billy Knight to secure a special place in franchise history hell.

I bring this up now because though Atlanta drafted Duke’s AJ Griffin, a solid wing with 44.7 shooting percentage from 3-point range, with their first-round pick, nobody should assume this will define their offseason. Maybe they keep Griffin, maybe they don’t. But what we can be fairly certain of is they are going to do something soon — maybe in the next day or two, maybe after July 1 when the NBA’s league year begins and teams can start spinning sign-and-trade deals with impending free agents.

This team went a pedestrian 43-39 last season. The 2022-23 team will not be the 2021-22 roster plus Griffin, and that’s not meant as a shot at Griffin. The Hawks just need more significant change to expect significant improvement. The focus remains on forward John Collins, and there’s a growing belief around the team that he’s on the way out.

It’s understandable if that upsets some fans. Collins is a talented player capable of putting up 20 and 10 any night. He’s a standup guy and is well liked by teammates. But trading him seems unavoidable for two reasons: 1. Team president Travis Schlenk and owner Tony Ressler have acknowledged they erred by effectively standing pat after the team’s run to the Eastern Conference finals; 2. If the Hawks desire to change their look and acquire a player of value, they have only two on the roster who realistically have that kind of trade value.

One is Young, who’s not going anywhere. The other is Collins, who logically is going somewhere.

Collins has not asked to be traded, but at this point it would be understandable if he would welcome an exit. He has been a walking trade rumor for two years. There were reports Thursday that Atlanta has discussed dealing him to San Antonio for All-Star guard Dejounte Murray, a deal that would give Atlanta an explosive backcourt. Murray has two years left on his contract so that trade could be made at any time, but the Hawks presumably wanted to get through the draft and take time to weigh their options.

When Schlenk was asked about trades last week and told The Athletic, “There are four or five paths we can take right now,” he didn’t finish the thought with, “Or we can do nothing.” Schlenk and recently promoted general manager Landry Fields don’t aim to clean house. But they know they need to put a team around Young that can contend again.

In a follow-up question about Collins, Fields said Collins is “under contract for a long time,” and, “He’s been a great player for us. We’re excited about John Collins.” Then he reiterated his previous comments about ongoing trade talks, adding, “That’s part of our job. We want to get better.”

Collins, coincidentally, was Schlenk’s first draft pick as the Hawks’ GM in 2017. The forward was picked 19th but has turned out to be one of the five or six best players in that draft. With advanced metrics as a gauge, Collins has been the fifth-best player in the draft in win shares and VORP (value over replacement player), trailing only Jayson Tatum, Donovan Mitchell, Bam Adebayo and Jarrett Allen.

Draft day decisions in the next two years have not been as universally accepted. The Dončić-for-Young trade in 2018 might be one of those deals that work out well for both teams. But Dončić has been more accomplished by almost every metric, and the bonus 2019 first-round pick the Hawks got in the deal, Cam Reddish, has been a bust. Schlenk flipped Reddish to the Knicks for Kevin Knox and a potential No. 1 that’s protected for three years and may wind up being two second-rounders.

The Hawks also paid a steep price to trade for Hunter and Solomon Hill in 2019, dealing Hayes, the draft rights to two other players and a protected No. 1 that ultimately conveyed into two second-rounders. Hunter is the team’s best defensive player and has shown an offensive upside, but progress has been slowed by injuries and he struggled last season. With the same metrics as in the Collins draft, Hayes ranks second in win shares (Hunter 28th) and seventh in VORP (Hunter 57th).

Hunter likely won’t be traded because of his decreased market value and his remaining potential. The Hawks need him to fulfill his promise next season. They also need change, and they know it. And on some level, Collins probably knows it, too.