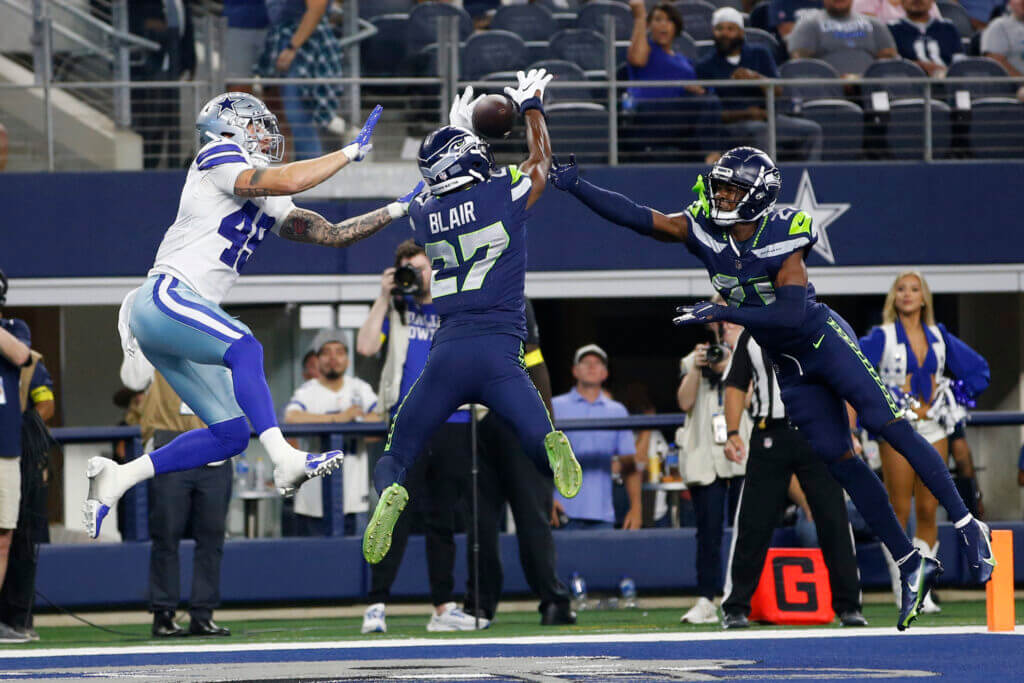 Seattle’s initial 53-man roster must be finalized by 1 p.m. Tuesday. After that, the Seahawks can assemble their 16-man practice squad. Here’s how I expect the initial roster to look.

Smith has the starting job and Lock will be his backup. Based on the few reps Jacob Eason had in training camp and the preseason, he’d be a practice squad candidate unless the Seahawks want to look elsewhere for their third-string quarterback, which isn’t something I’d rule out. Eason’s accuracy was wildly inconsistent in practice and the preseason games.

Seattle coach Pete Carroll does not know when Walker (hernia) will be able to play.

“He’s doing fine, but how many weeks it’s going to take? I don’t know that and then the docs aren’t telling us, either,” Carroll said last week. “A lot is going to have to do with him and if you’re going to bank on him, he’s going to make it back in a hurry because he’s really tough and he’s very demanding of himself, so we’ll see how it goes. We’re going to be hopeful for that to happen.”

Whether he’s placed on injured reserve to start the year or not, Walker will need to be on Seattle’s initial 53. If he’s not healthy, Seattle would keep him on the initial roster, then move him to injured reserve and call up Josh Johnson to temporarily fill that spot and help out on special teams. Seattle in the past has kept a fullback on the roster but there’s no need to do that this year.

Metcalf, Lockett and Eskridge are locks because of talent, salary and draft status. If Melton and Young, two seventh-round rookies, were to hit the waiver wire, it’s unlikely they would be claimed by another team. Melton led all Seahawks with seven catches for 89 yards this preseason, however he had several drops. Young had seven catches with 73 yards and a touchdown but he also struggled with drops. Teams like to keep their draft picks on the initial 53-man roster barring a catastrophic event, so I’d imagine both Melton and Young are safe.

After that, it’s tricky. Freddie Swain has been around since 2020 and plays special teams but he doesn’t appear to have done anything to suggest he’s worthy of a roster spot, especially after Seattle invested in a pair of rookie receivers and acquired a veteran speedster like Goodwin in free agency. Hart, on the other hand, caught five of 10 passes for 84 yards in the preseason, including catches of 41 and 35 yards from Smith and Lock, respectively. Hart also contributes on special teams coverage – though Swain is a punt returner, to be fair – and is a reliable blocker in the run game. Hart arguably has more value than Swain at this point. Seeing Eskridge, the team’s top pick in 2021, return punts against the Cowboys may contribute to making Swain expendable.

Seattle has kept seven receivers in the recent past so this wouldn’t be a totally unprecedented situation. But it may be tough for Seattle to carry seven receivers all season. The practice squad candidates: Swain, Aaron Fuller, Cade Johnson and Kevin Kassis.

There shouldn’t be any surprises in this position group. Tyler Mabry and Cade Brewer will be practice squad candidates. If the team must choose between the two, my guess is Seattle picks Mabry.

Rookie offensive guard Shamarious Gilmore was released on Wednesday to make room for Brewer. I’d expect tackle/guard Greg Eiland, center Dakoda Shepley and rookie guard/tackle Liam Ryan to be waived as well. Eiland, Shepley and Ryan may be re-signed to the practice squad, though Eiland and Shepley didn’t look good in the preseason finale.

Geno Smith is grateful to have another shot at being a starting QB. And he’s got 1 goal as the #Seahawks prepare to start their season.

“It’s really about winning. None of this will matter if we don’t go out and win the games we’re supposed to win.” https://t.co/NSVcot1ply pic.twitter.com/hGKUc2G3PZ

Seattle’s 3-4 base defense requires a nose tackle and at least one backup nose. They’ll have Woods and Mone for that. Ford and Harris are the starting tackles next to Woods, and Jefferson should be one of their backups. From there it becomes a decision between Adams and 2019 first-round pick LJ Collier, who missed all three preseason games with an elbow injury. Defensive coordinator Clint Hurtt didn’t give a glowing endorsement of Collier on Wednesday.

“He was doing a nice job while he was out there on the field and was healthy,” Hurtt said. “It’s a tough deal. I tell guys all of the time that it is hard to make a club when you’re in the tub. You have to be out there and ready to go. When he is out there practicing, he gives great effort, but it’s tough.”

Now compare that to Hurtt’s comments about Adams: “He has been unbelievable, but that’s not a surprise. Last year, Myles, you could see his development, him come along, and see some things. The rush ability, playing the run game, and he had a chance to play in some games in the latter part of last season, and did a nice job.”

Cutting Collier would require swallowing some pride on the front office’s part, but the writing has been on the wall since Seattle declined to pick up Collier’s fifth-year option in May 2021. And Adams was arguably Seattle’s best player in the preseason, recording a team-high nine quarterback pressures with 1 1/2 sacks and three tackles for loss.

Rookie fifth-round pick Tyreke Smith began training camp on PUP because of a hip injury and then came off the list on Aug. 1. But Smith has missed nearly all camp with an injury to his other hip. Seattle may keep Smith on the initial 53-man roster then place him on injured reserve to start the season.

If that ends up being Smith’s fate, the rest of the edge rusher room is easy to predict. Seattle will continue to receive a roster exemption for German linebacker Aaron Donkor if the team chooses to keep him on the practice squad. I’d imagine they choose to keep rookie edge defenders Vi Jones and Joshua Onujiogu on the practice squad as well. Robinson suffered a knee injury Friday night and if he has to do a stint on injured reserve, that may open up a spot for someone like Jones.

This position group isn’t very strong after Brooks and Barton, and it wouldn’t be shocking to see the Seahawks claim an inside linebacker off waivers or make a trade to add another body to the room. As currently constructed, Brooks, Barton, Bellore and Muse feel like the top four, but that unit would be in serious trouble if one of the two starters sustained an injury. Bellore is a quality special teams player so his job may not be in jeopardy, however, he didn’t look good when he played against the Steelers in the preseason.

Lakiem Williams and Joel Dublanko, Seattle’s leading tackler in the preseason, are the practice squad candidates here (along with Vi Jones, who can play inside).

It’s unclear who the Week 1 starters will be. Jackson had an outstanding preseason, both as a tackler and a coverage man. Jones has been consistently productive in practice, but he’s still dealing with a concussion. Burns (groin) made his preseason debut on Friday and has also been consistent in practices. Woolen was a bright spot throughout camp and was the starter at right cornerback in all three preseason games. Coleman should start at nickel but Bryant is right on his heels.

Second-year outside corner Tre Brown (knee) won’t be healthy in time for the start of the season and because he’s already on the active/PUP list, Seattle can easily move him to the reserve/PUP list and sideline him for at least four game to start the year. If that happens, the only two corners being released here are John Reid and Jameson Houston. Reid has had some nice moments in camp and should be re-signed to the practice squad after his release.

The notable omission here is fifth-year safety Ryan Neal, who is still recovering from an ankle injury that kept him out of all three preseason games.

“Ryan (Neal) thinks he is going to make it, that’s what he is saying,” Carroll said Thursday. “He is really positive about it, but it was a legit high ankle sprain. Sometimes those feel kind of good until you really push on them and then when you really push on them, you find out that it is not there, so we don’t know that yet.”

If Neal is healthy enough to play Week 1 (or even Week 2) then Seattle will probably either keep five safeties or cut Blair, who has looked like a wrecking ball at times in the preseason – albeit one who doesn’t always wrap up. Cutting Collier and Blair, their top two picks in the 2019 draft, would be a very tough pill for the front office to swallow, which is why I’m not predicting that to happen. Blair should make the team as long as Neal is still nursing a bad ankle.

Myers, Dickson and Ott are all locks to make the roster and none of their jobs have ever been in jeopardy.

Leïla Slimani: ‘Attack on Salman Rushdie shows why we must not censor ourselves’

Being gay, I was deeply sceptical about marriage – but then I conducted a wedding for my two best friends