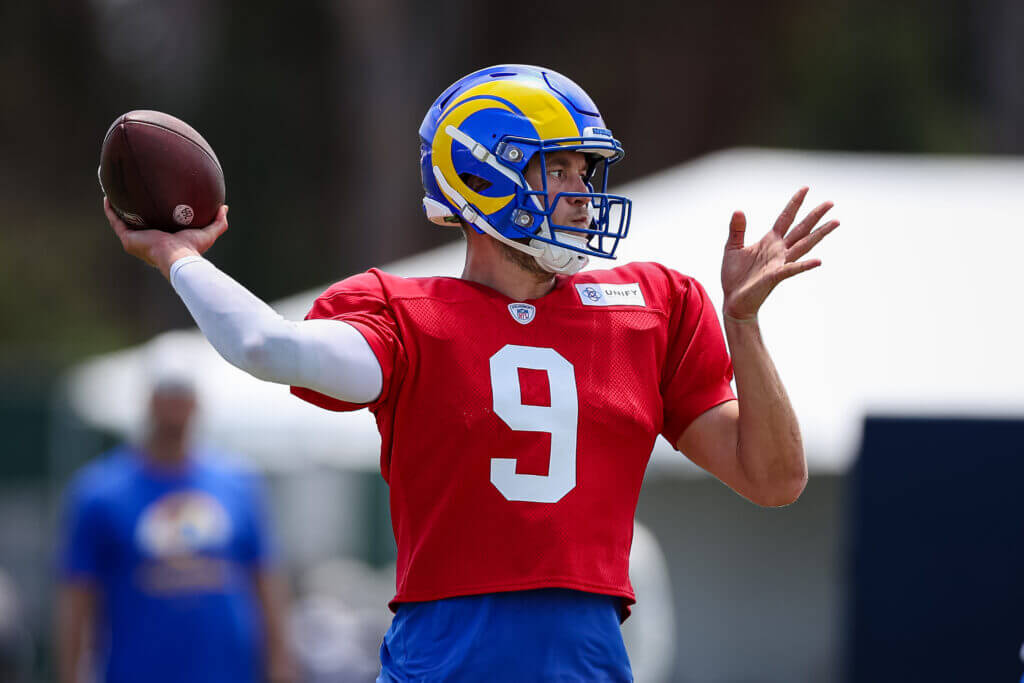 The Rams won’t likely ramp quarterback Matthew Stafford’s throwing back up past individual drills with receivers or 7-on-7s until they’re back in Thousand Oaks later this month, head coach Sean McVay indicated this week.

Stafford, 34, has been dealing with an ongoing elbow issue, an issue he also dealt with it in 2021, when he quarterbacked the Rams to their Super Bowl victory. He has been intentionally limited in training camp, according to the team. Thursday, McVay called the issue “a tricky deal” and “abnormal for a quarterback,” likening it more to something an MLB pitcher might experience.

“It’s something I’ve never navigated through as a quarterback with a coach,” McVay said.

The Rams entered training camp with a specific workload plan for Stafford, which McVay said has remained on schedule. Stafford, who threw some in team drills as camp began, eased off the volume of reps after their first several days of practice. In their last three padded practices (including Thursday), backup quarterback John Wolford took over the first-team offense for team drills, something he told The Athletic that he had expected in accordance with Stafford’s pre-planned schedule.

McVay added Thursday that the Rams explored a few different non-surgical treatment options for the issue – which he declined to say was tendinitis, as earlier reports speculated – and largely to alleviate pain. Stafford had an anti-inflammatory shot in his elbow in March, The Athletic first reported, but never had any sort of surgical procedure.

Declined to call Stafford’s elbow issue “tendinitis” and instead noted that “it’s a tricky deal” and “abnormal for a QB”, moreso “things that MLB pitchers deal with” and team is learning more about “on the fly”. Adds Stafford looked great in limited reps today. https://t.co/5eVkA7ixgD

The Rams have also indicated that they’re erring on the side of caution in light of a truncated offseason that ended in February and began again in May. They weren’t “caught off guard with” the issue, McVay said, and it’s not a new issue. However, McVay also indicated this week that some extra precaution is being taken because the team cannot predict how Stafford’s arm will feel mid-season and beyond.

Stafford did throw during drills on Thursday, but didn’t take part in team reps, which was in line with what McVay had said earlier in the week.

In his place, No. 2 quarterback John Wolford has taken the bulk of reps with the first-team offense throughout training camp. Wolford told reporters that was the plan entering training camp and he wasn’t surprised by Stafford’s maintenance plan.