To paraphrase the late, great Brian Clough, “I wouldn’t say this was Sheffield United’s worst defensive display on home soil under Paul Heckingbottom… but it was in the top one”.

Nottingham Forest’s jubilant supporters left Bramall Lane in the Saturday afternoon sunshine singing about Wembley and being on their way to the Premier League. It was difficult to argue on either count.

Not after the steel-like defensive resilience on which United’s play-off qualification had been built had crumbled to dust. This was as shoddy as it gets, with Forest picking their hosts apart with alarming ease.

That United head to the City Ground just a solitary goal behind owes everything to the profligacy of Steve Cooper’s side. They had 17 efforts on goal, eight of which were on target.

Both represented unwanted highs for the season by a visiting side at Bramall Lane, beating Fulham’s 14 efforts a week earlier and the five shots on target faced when Peterborough United and Millwall had been in the Steel City back when Slavisa Jokanovic was at the helm.

Brennan Johnson, Ryan Yates and Sam Surridge all missed gilt-edged opportunities during a first half that saw United’s expected goals against (xGA) stand at 2.02, comfortably the highest all season in an opening 45 minutes for the Yorkshire club at home or away.

Johnson again and Djed Spence were then culpable when wasting great chances after the break. This inability to truly punish their hosts’ generosity is why Sander Berge’s stoppage time strike may yet prove to be more than the mere consolation it should have been.

“The tie is still alive,” said Heckingbottom, the United manager’s expression betraying his clear sense of relief. “It is half-time and there is still plenty of football to play.

“I think you could see the body language had changed (due to the goal), more so for those connected with Forest rather than us. It has changed the mood among the fans and among both camps. Hopefully, it proves to be a pivotal moment.”

United’s intention in the first leg had been to take the game to Forest. Buoyed by that final day thumping of champions Fulham, Heckingbottom demanded more of the same, particularly from the attacking threat of Iliman Ndiaye, Morgan Gibbs-White and Berge.

As much as there was intent to get on the front foot, United’s coaching staff also knew from experience just how dangerous Forest can be in attack. This is particularly the case on the break, with the clear message beforehand concerning the need to stop the first pass to the lively frontline whenever the visitors claimed possession.

Back in March when these teams had fought out an entertaining 1-1 draw, Philip Zinckernagel had been a key figure in what was arguably the best attacking display by a visiting team all season (Forest’s xG that night had been 2.1 to United’s 0.83).

With that in mind, Oliver Norwood was handed the task of trying to keep the Dane quiet. The longer the first half went on, the harder this became as Zinckernagel exerted more and more influence on proceedings.

It didn’t help that Norwood was having a poor game by his usually high standards. That normally reliable passing radar was way off, never more so than with the wild pass over Ben Osborn’s head that allowed Forest to break at speed ten or so minutes before the break.

“Changed the whole complexion. The whole feeling. It’ll be a totally different game away from home.”

Wes Foderingham, not for the first time, spared United’s blushes by keeping out Johnson’s effort.

An inability to keep Zinckernagel quiet, however, was far from United’s only defensive shortcoming. Their left flank was wide open, particularly during the closing stages of a first half when the home goal felt to be under siege.

Spence, the full-back on loan from Middlesbroughf, was given far too much space. Johnson, too, was granted far too much licence to roam, be that when bursting forward with the ball at his feet or when trying to latch on to a team-mate’s pass.

Allied with the problems in keeping Zinckernagel quiet and that porous left flank was a series of individual errors that would have shamed a schoolboy. Never was this more so than for Forest’s two goals.

Worse was to follow early in the final quarter, as John Egan’s inexplicable hesitancy on the ball allowed Joe Lolley to nip in and claim possession. United’s stand-in captain could only then watch in horror as Johnson punished his mistake with a clinical finish.

What made United’s often shambolic efforts in defence all the more frustrating was how well the same players had performed on their own patch in the previous six months under Heckingbottom.

In 14 regular season outings since the 44-year-old succeeded Jokanovic in late November, just four goals had been conceded. Foderingham’s key role in that record is illustrated by United’s xGA for those fixtures being 12.61.

There had been 11 clean sheets during a productive run that yielded 33 points, the second-highest tally in the Championship across the same period.

To go from that near impenetrable backline to Forest almost being able to shoot at will in Saturday’s first leg must have left the coaching staff scratching their heads on the touchline. That most of those 17 efforts on goal came from central areas, as shown below, underlines just how easily United had been opened up. 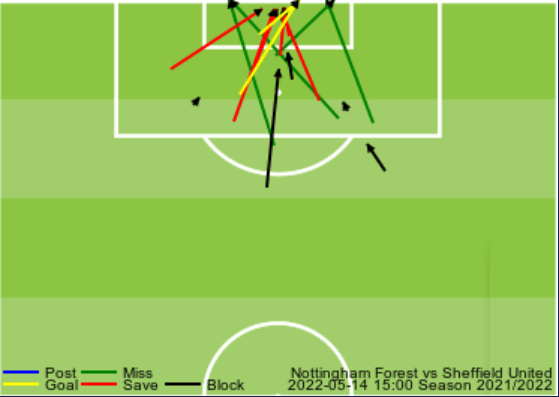 United cannot afford a repeat on Tuesday. The supply line to Zinckernagel, Johnson or Surridge once Forest claim possession — the trio having been found far too easily by their team-mates on Saturday — simply has to be cut.

It may help that Forest, as the home side, will not be playing as much on the counter. Instead, Cooper’s side will be expected to take the game to United.

That could play into the hands of Ndiaye and Gibbs-White, a front two who boast sufficient pace to cause problems on the break for even the most sure-footed of backlines.

Nevertheless, even if the United duo can spark things in attack amid what will be a bearpit atmosphere, unless the art of defending is rediscovered then United’s hopes of clawing back this play-off tie seem doomed.