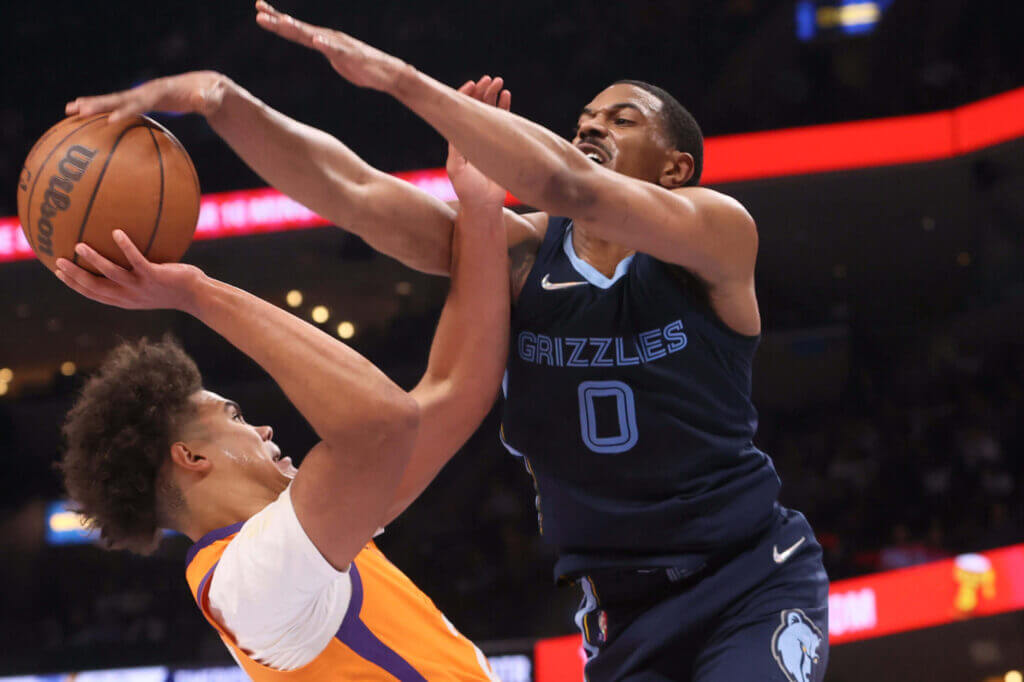 Heading into the 2022 NBA Draft, it made sense that the Philadelphia 76ers were looking to trade the No. 23 pick for some veteran help.

The Sixers find themselves in win-now mode, trying to break through the second-round playoff wall. And even for experienced college players, the ability to survive high-level NBA basketball as a rookie can be a difficult task. So, with a lack of quality depth sticking out as a major reason that the Sixers lost to the Miami Heat last month, dangling one of the team’s few remaining assets (the 23rd pick) to bolster the rotation felt like a logical move.

As it turned out, the Sixers found an acceptable trade. And after speculation over the past few days that Daryl Morey was going to re-assemble the 2018 Houston Rockets this offseason, the Sixers president of basketball operations found a player who he did draft in Houston after that 2017-18 season ended: 24-year-old Memphis Grizzlies combo guard De’Anthony Melton. To complete the deal, the Sixers sent Danny Green and the No. 23 pick (Colorado State forward David Roddy) to Memphis.

And for the Sixers, an offseason that was projected to be about adding toughness and bolstering depth got underway with the first major transaction.

The term 3-and-D gets mentioned quite a bit in the NBA, sometimes a bit too much. In Melton, the Sixers are getting a player who truly specializes in making 3s and bothering opposing offenses.

Let’s start on the defensive end, where Melton has an impressive 6-foot-8 wingspan to go with his 6-foot-2 frame. He’s an excellent option to play on the ball against elite opposing point guards as the Sixers play drop coverage against pick-and-rolls with Joel Embiid. And like Matisse Thybulle, Melton is a defensive playmaker who can get into the passing lanes and cause havoc off the ball. Per Cleaning The Glass, Melton’s 2021-22 steal percentage (2.5 percent) and block percentage (1.1 percent) were both elite numbers, which has been the case for each of his four NBA seasons.

Melton also is an excellent defensive rebounder from the guard spot, which was an issue for the Sixers at times last season. For a team that has struggled athletically on the wings and in the backcourt, Melton will help some. And he immediately provides a major upgrade on defense.

Offensively, Melton provides some 3-point bombing for a team that badly needs to increase its volume from beyond the arc. He took 7.3 and 8.1 3-pointers per 36 minutes over the past two seasons when he shot 38 and 41 percent, respectively. Per Synergy, Melton averaged over 1.187 points per possession on catch-and-shoot possessions over each of the past two seasons, which are elite marks.

Where Melton does not excel is with his ball skills. In each of his four seasons, he shot under 47 percent from two-point range despite his athletic gifts. That has been a major drag on his overall scoring efficiency. In addition, Melton’s assist-to-turnover numbers have been ordinary and his ballhandling is considered to be below average.

In many ways, this is the type of move that Morey and the front office made during the 2020 draft, focusing on the fit of imperfect role players with the core pieces. The Sixers already have Tyrese Maxey, James Harden (presumably) and Joel Embiid to create offense. Melton is someone, like the player he was traded for, who can theoretically finish plays and add some defense.

While the skill set seems like a solid fit, Melton is certainly not a wing. The Sixers are in search of added toughness, but ideally, that would come at the 3 and 4 positions with added defensive versatility and size. In trading Green for Melton, the Sixers still have a hole at the wing. Shake Milton, as the presumed No. 3 guard before this deal, likely moves down a spot in the rotation.

On a positive note, Green will get his salary guaranteed as he rehabs from the serious knee injury that he suffered in the Sixers’ season-ending loss to Miami.

As it stands, the Sixers now have 13 players under contract and somewhere around $152 million committed assuming Harden opts into his $47.3 million player option next season. Moving Green’s contract with the draft picks was one of the moves available to the Sixers but one of their other options was to waive him and use the increased spending power available to them with $10 million off the books.

With the Apron projected to be at $155.7 million, the Sixers will not have use of the non-taxpayer mid-level exception ($10.3 million) unless some other moves are made to get under the hard cap. That is possible, but unless those moves are made, they will be limited to mini mid-level ($6.4 million) and minimum contracts to fill out the roster.

The goal for the Sixers heading into the offseason was to add players who could be trusted in a playoff series. Melton’s regular-season production suggests that he could be that type of addition, but he has struggled in 15 playoff games for Memphis over the past two seasons. Perhaps that is at least partially why the Grizzlies felt he was expendable. His inefficiency on the offensive end is a bit worrying as well.

Melton is a young player on a movable contract who has the toughness and skill set that the Sixers are craving. To surrender only Green’s contract and take nothing else off the roster feels like a good value play, especially because his best years are theoretically ahead of him.

But it’s not the perfect positional trade for the Sixers. Perhaps Melton could play with Harden and Maxey in some lineups (especially if there is a bigger player who is a less threatening one-on-one, Harden’s specialty), but he feels like a better fit with each of them separately. This is not a one-for-one move for Green, who could reasonably slot in as the starting small forward.

The backup guard spot is still an important position. But the Sixers have some work to do on the wings outside of Thybulle, who is still on the Sixers roster after draft night. Unless there is an unexpected blockbuster trade, Morey and Co. need to do the rest of their offseason work to bolster the 3 and 4 positions. After this move, they have less ammunition to make those moves happen.

There is still a lot of offseason left and this move is only part of the puzzle. But on draft night, the Sixers decided to target a defensive upgrade whose skill set complements their key players. That feels like a decent use of limited resources.

Barry Trotz says he won’t coach in NHL next season