Almost exactly a year ago to the day, Nuno Espirito Santo was the centre of attention.

Tottenham Hotspur’s new head coach, riding high having overseen an opening-weekend victory over champions Manchester City, returned to Molineux for the first time since leaving Wolves at the end of the previous season.

It was Wolves’ first home game with fans in attendance since March 2020, thanks to the COVID-19 pandemic, and was also Raul Jimenez’s competitive return to Molineux, nine months on from his horrific fractured skull. But Nuno, certainly in the national narrative of the day, got top billing.

Spurs won 1-0, like they did against Watford a week later to go top of the early Premier League table with nine points out of nine and three clean sheets in three games.

The speed at which Nuno has, for the time being, become irrelevant has also been rapid.

It may only be 12 months since you couldn’t move for the Nuno narrative but you won’t hear people calling the Spurs vs Wolves fixture tomorrow (Saturday) the “Nuno derby”. It’s the Matt Doherty derby if anything. Or, if you’re a writer and trying to be humorous, the Steve Sedgley or Andy Sinton derby.

Tottenham have certainly moved on from him. Appointing Nuno, however much that decision may have caused problems and upheaval in the short term, led them to current head coach Antonio Conte. 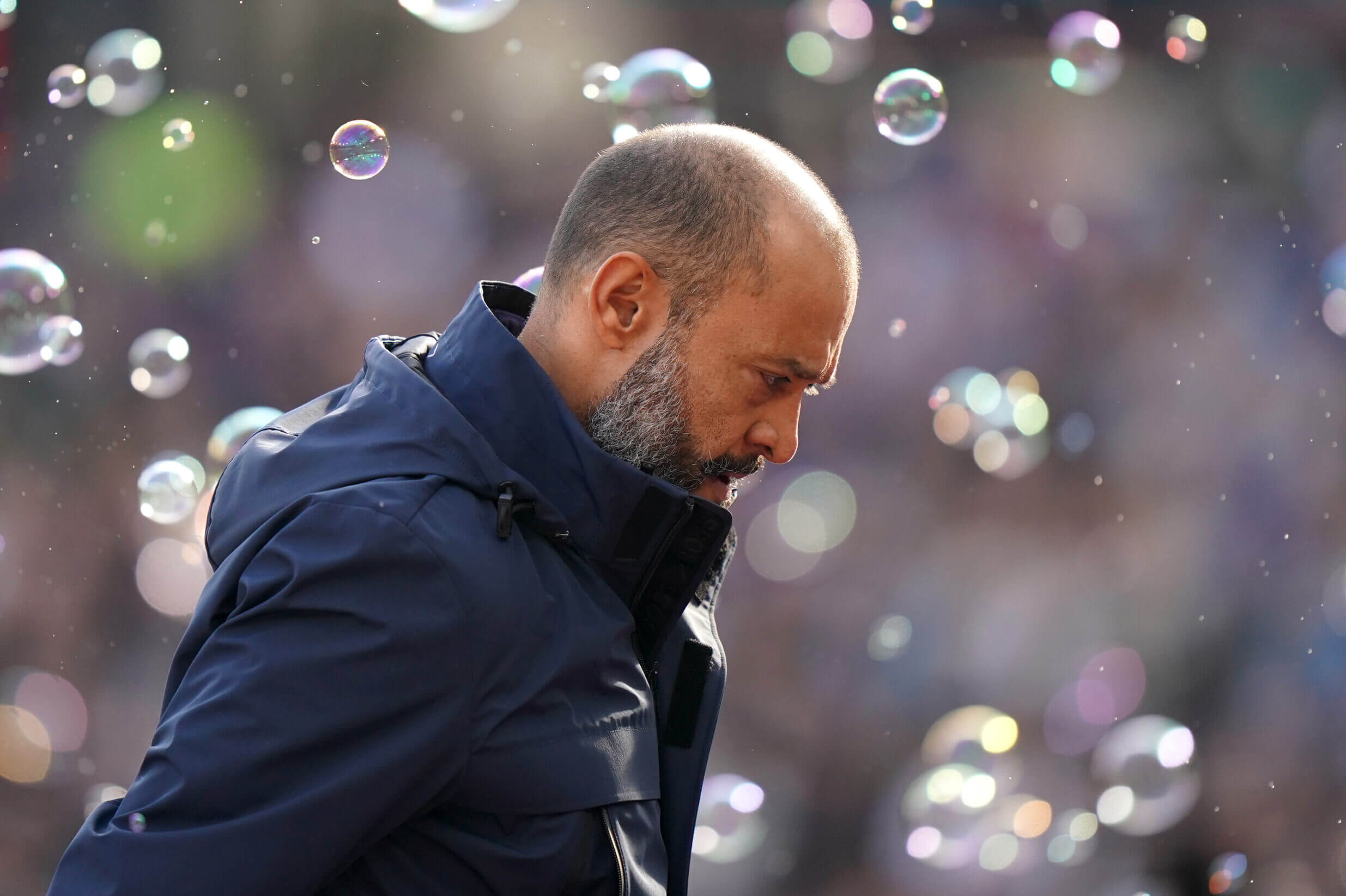 After a good start, five defeats in the next seven games ended Nuno’s spell at Spurs (Photo: Getty)

Wolves have moved on too.

On the whole, his replacement Bruno Lage made a good impression last season and has now instigated what seems like a permanent change to four at the back, something Nuno couldn’t administer in one of the very few failures of his four years at Molineux. Plus, they’re busy signing Matheus Nunes for a club-record £38million ($45.6m), so Wolves supporters are very much, like Spurs, looking to the future.

If you weren’t aware, Nuno is back in work now, having taken time out post-Spurs to spend time with his family back home in Portugal while assessing his options and perusing job offers (including positions in Turkey and Brazil). Where has he wound up? Al-Ittihad in Jeddah, Saudi Arabia.

He’s been joined there by the perennially-young Scottish coach Ian Cathro (still only 36 years old) who was also with Nuno at Portugal’s Rio Ave, Valencia in Spain, Wolves and Spurs, plus goalkeeping coach Rui Barbosa.

No doubt working in Saudi Arabia offers an interesting challenge for Nuno and Cathro, certainly culturally, but it’s hard to envisage them there were it not for the obvious financial benefits. And it feels like a waste.

Nuno has signed Portuguese winger Helder Costa, once of Wolves and Leeds, and the 28-year-old has instantly become one of the most talented players in the Saudi league.

Others in the division include former Brazil international midfielder Luiz Gustavo (aged 35), veteran Egypt and ex-West Brom centre-back Ahmed Hegazi (31), Cameroon captain and striker Vincent Aboubakar, and former Sevilla magician Ever Banega, he of 65 Argentina caps and the man who diddled Wolves out of a Europa League semi-final a couple of years ago with a midfield masterclass.

As for managers, there’s Rudi Garcia, formerly of Roma, Marseille and Lyon, who is at Riyadh’s Al-Nassr, plus Nuno’s ex-Porto team-mate Pedro Emanuel at Al-Khaleej in the city of Saihat. That’s about it in terms of people of note, from European and international football at least.

Attendance-wise, Nuno’s Al-Ittihad are the best-supported club in the country with an average crowd of around 30,000 in their 62,000-capacity stadium.

But in terms of a career move? Well, it depends what Nuno wants from his career, but it doesn’t feel right for a man often described as a genius by those who worked with him at Wolves (and by himself to The Athletic once upon a time) to sit outside football’s mainstream.

Taking the Spurs job was a gamble which didn’t pay off. He may have been handsomely rewarded with a large pay-off when he left, but Nuno’s reputation suffered in those few months.

His stock post-Wolves was still high, despite a dodgy final season. The previous three years were basically perfect (winning the Championship title and then finishing seventh, twice, in the Premier League while also reaching that Europa League quarter-final and an FA Cup semi-final Wolves were three minutes from winning) and led him to be linked with all manner of high-profile jobs, most notably the Arsenal one.

Joining the other north London giants didn’t suit him. He found some of their distracted and unwanted players hard to manage, he faced an insurmountable battle to earn their respect, given he was so clearly a long way down Tottenham’s list of candidates, and he had an unhappy Harry Kane to deal with.

Yes, he made mistakes, but against his better judgement (he was believed to be reluctant to take the job until his agent Jorge Mendes convinced him otherwise) it was a role he should, in glorious hindsight, have turned down. He should have gone to Crystal Palace, who had strongly courted him.

Those close to Nuno say that, post-Spurs, he was looking for a fresh project and a mountain to climb in the manner of what he achieved with Wolves, taking a team up a few levels and galvanising a group of mouldable players with small egos for footballers (Nuno doesn’t like being challenged).

Those opportunities, even when your agent and close friend is Mendes, don’t come around very often.

So for now, it’s Al-Ittihad. He’ll be acutely aware of his reputation having taken a hit, but he’ll also know that being out of sight of European football means being out of mind.

However well he does, it’s unlikely he’ll be there long, given Al-Ittihad have had 20 permanent managers since 2010.

At Wolves, he transformed a team, a club and a city, conducting one of the best teams ever seen at the second level of English football. They may not have reached 100 points or broken records, but when Wolves were at their best in the Championship it was football from another league.

He helped launch the top-level careers of not only Conor Coady and Doherty, but also Diogo Jota, Ruben Neves and Pedro Neto. He became a hero to his people. He took Wolves to places they didn’t think they would reach again.

In short, he’s far too good to be out in Saudi Arabia, as is the astute and talented Cathro.

If he ever does return to English football, he’ll forever receive a warm reception from Wolves supporters. Spurs fans? Possibly not so much.