Liverpool showed Manchester City they are ready to go toe-to-toe again this season. And City, for now, will have to face it with only two first-team natural full-backs.

Jurgen Klopp’s side clinched the Community Shield title with three goals created from their devastating right flank — with Mohamed Salah starring on it.

It took three minutes of the game for the Egyptian to let Joao Cancelo know he was up for it. Salah dribbled past Cancelo with the ease of a simple touch to his right foot, but then fired a shot into the side-netting.

The Portuguese defender struggled particularly in the initial 20 minutes of the game, which ended up with Salah assisting Alexander-Arnold’s opener. The Egyptian was involved in 32 passes in the whole game. He passed with a 94 per cent accuracy, with just two of them being unsuccessful.

Salah also scored Liverpool’s second from the penalty spot and crossed the ball that ended up with Nunez scoring a third for Klopp’s side.

Deep down, it exposed arguably the biggest flaw Pep Guardiola will need to fix before the transfer window is shut: having Cancelo and Kyle Walker as the only experienced full-backs in the team might be a gamble too risky to take.

It is not common to see a team with an inverted right-back as their best asset on the left side of the defence. This is Joao Cancelo and he’s a special case — possibly the most technically gifted full-back in Europe. But even with Cancelo at the peak of his powers in the past two seasons, Pep Guardiola had moments in which he needed “a Zinchenko”. 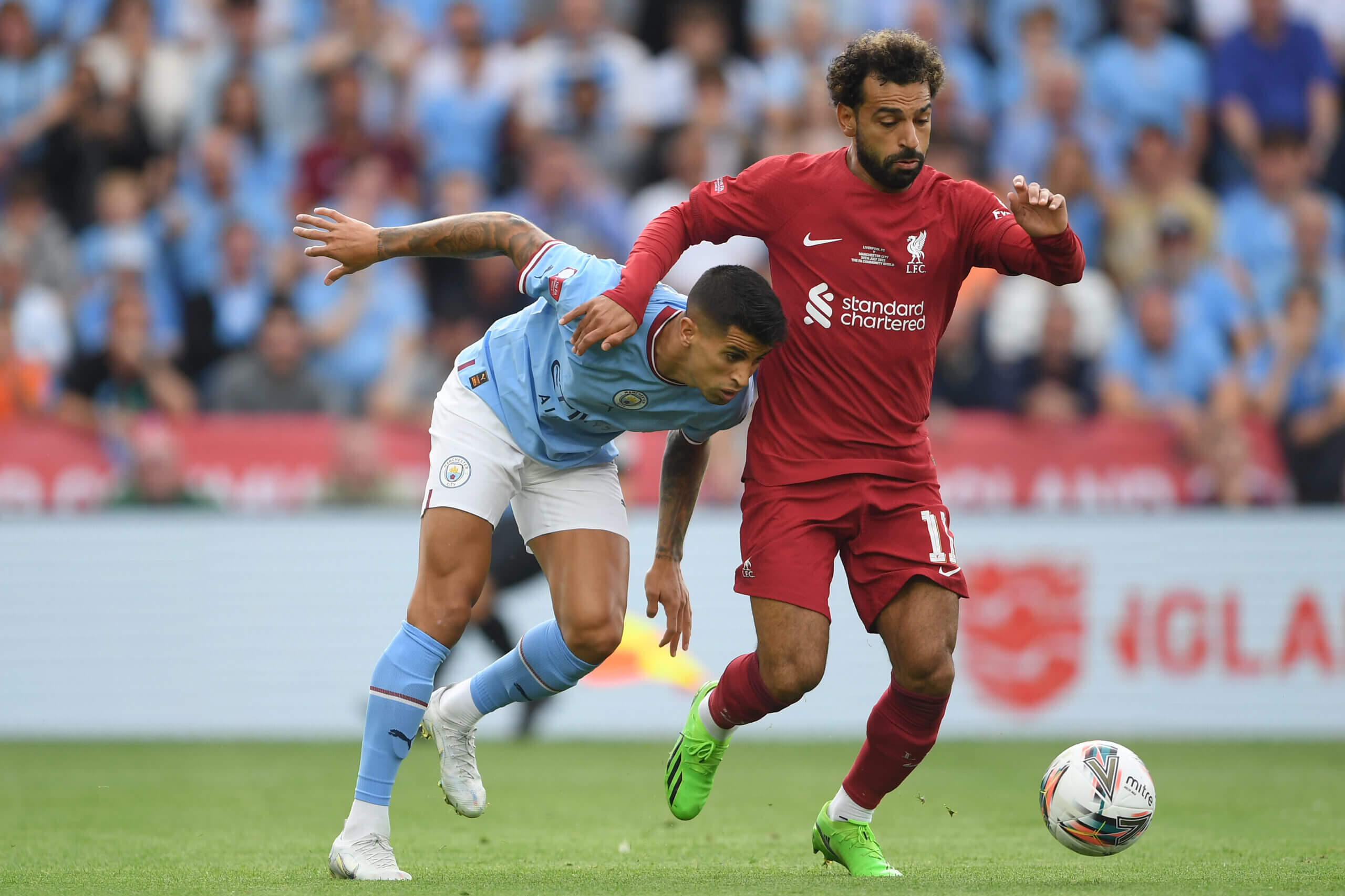 The final game of the Premier League last season, when he came on at half-time to provide the assist for Rodri’s equaliser is an example. The 2021 Champions League run-in when City reached the final with Zinchenko as a starter, another one.

Now the Ukrainian is with Arsenal and City still look far from finding a successor. A deal for Brighton left-back Marc Cucurella has stalled, despite the Spaniard handing in a transfer request on Friday morning.

Brighton have set a £50-million-plus ($61m) valuation for the defender, who is rated even higher than Ben White, according to sources in the negotiations. Manchester City were able to raise their proposal up to £40 million, and The Athletic understands they made an improved offer on Thursday. The answer from Brighton did not change.

Cucurella was not involved in Brighton’s 5-1 win against La Liga side Espanyol on Saturday. As The Athletic also revealed earlier this week, conversations between clubs have come to an end and a major change in the negotiations is needed for a potential deal to come through.

Apart from his creativity, Cucurella was especially admired in the senior offices of the City Football Academy for his defensive abilities. The aggressiveness in his man-marking and discipline on the back line were thought to be a perfect complement to Joao Cancelo.

When asked about signing a new left-back, Pep Guardiola tried to be cautious last Friday: “If it is possible, yes. If not, we stay with what we have. We have enough players who can play there. Joao can play there, Josh (Wilson-Esbrand), Nathan (Ake) can play there.”

The Spanish manager mentioned Wilson-Esbrand, and there was a reason for that. The 19-year-old was included in the squad for the Community Shield and is highly regarded among the first-team staff. The biggest concern on Wilson-Esbrand is his injury record.

After landing at City in 2019 from West Ham, he has sustained two long-term injuries, including an ACL rupture a couple of seasons ago. Calmness and patience would be the best recipe for his progress to the first team.

City can be expected to explore new options. Borussia Dortmund full-back Raphael Guerreiro had been scouted and followed in the past, but the 28-year-old is not expected to be let go at a feasible price.

It is not going to be the easiest of the tasks for director of football Txiki Begiristain, with the Premier League starting next week.

Despite defensive struggles — and Erling Haaland’s missed chances — there were also positives to take for City.

Julian Alvarez was surely the biggest one. After the departures of Gabriel Jesus and Raheem Sterling, the Argentinian proved to be ready to play a significant role in Guardiola’s plans.

Alvarez was used for the first time off the right wing, taking over the place of Riyad Mahrez and he showed what he has to offer. His pace, link-up game and pressing efforts were promising glimpses. Alvarez levelled the game 12 minutes after coming on and hinted how he could benefit from Haaland’s presence.

Guardiola even decided to change his formation in some moments of the second half, to shape in a 4-4-2 with the Argentinian alongside Haaland up front.

Phil Foden was on the same path. It was hard to tell he did not take part in the pre-season tour as he hit the ground running as soon as he came on from the bench to replace an unfortunate Jack Grealish.

Foden was silky, clever and a constant threat. Alvarez’s goal came off his shot. It would not come as a surprise if Foden starts in the Premier League opener at West Ham next week.

However, one lesson Pep’s City should have learnt from the past is not to take too many conclusions from the Community Shield.

Last time they faced Liverpool in it was three years ago. City managed to win on penalties, after a 1-1 draw at Wembley.

At the end of the year, Pep’s side lifted the Carabao Cup as their only title, while Liverpool clinched their first Premier League in 30 years.