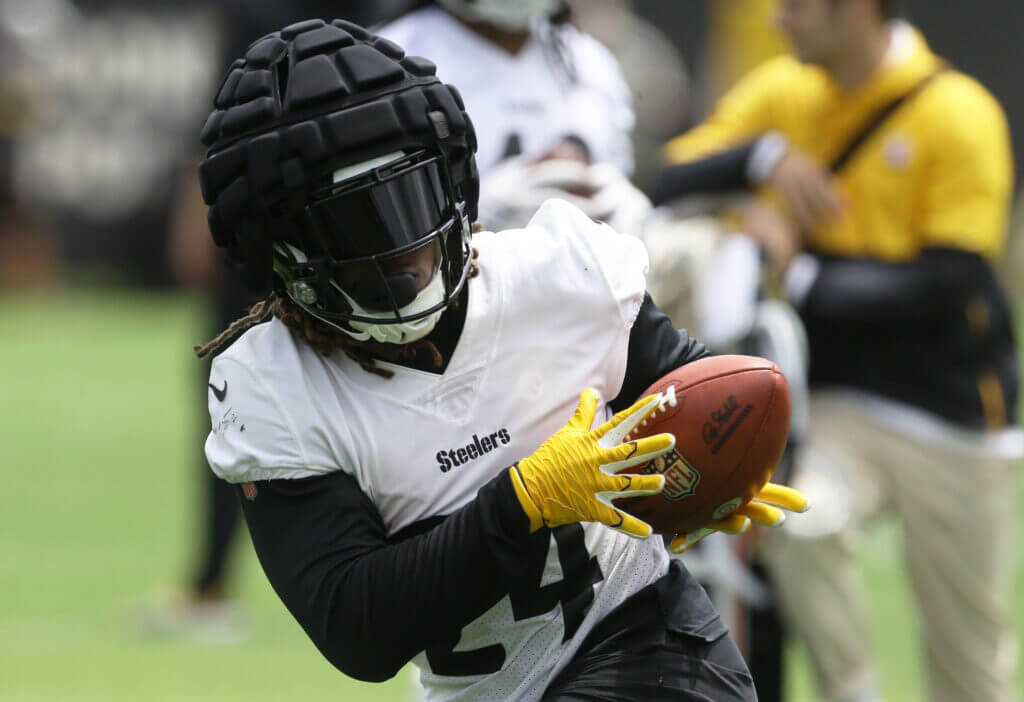 LATROBE, Pa. — It wasn’t Friday. The lights weren’t on at Latrobe Memorial Stadium. And the stands were probably half as full as they would have been on Friday if rain and lightning didn’t cancel the annual “Friday Night Lights” event.

There was one other alteration on Monday afternoon — for the first time in 15 years, the Steelers held a live goal line drill at the high school stadium. The longtime tradition of ending practice at Friday Night Lights with a live goal line period was discontinued when Bill Cowher retired.

Snell was a fraction away from scoring on his first rep from the 2-yard line before Minkah Fitzpatrick, along with Cameron Heyward and Montravius Adams, stuck his shoulders in there. Three plays later, Snell dove over the top for the score that put a cap on what was a solid day for the fourth-year running back.

Snell also broke off 5- and 16-yard runs earlier on third-and-1 live drills that saw him scrape down the line before finding the hole. It was against the first team, so Heyward, Fitzpatrick, T.J Watt, Devin Bush and Myles Jack were in the lineup.

“You know, it’s short yards and goal line, there’s no way around that,” Mike Tomlin said. “When there’s a line to gain, and it’s of that nature, you get to know yourselves and each other pretty quickly, and I like the efforts and the urgency relative to that segment brought today.”

Snell has put together a pretty good training camp, even though undrafted rookie free-agent Jaylen Warren has taken a lot of the spotlight. Still, it was Snell getting goal line reps on Monday with the first team.

The Steelers are looking to lighten Najee Harris’ workload in some capacity. Eddie Faulkner figured out that Harris needs to be off the field for seven extra snaps per game than in 2021. Where those might come is still unknown, but Snell, who was known for his power in college, has been better when he carries the ball 10 or more times over his career.

Snell has averaged 17 carries for 72 yards per game and 4.2 yards per rush when he carried the ball 12 times or more. Being a short-yardage back might be an option.

Observations from Day 14 (practice No. 10) of Steelers camp

1. If you are worried about how Larry Ogunjobi’s surgically-repaired foot would be once he got on the field, there’s nothing left to be worried about. Ogunjobi took team reps for the first time since signing with the Steelers after spring practices and quickly made an impact during the third play of team drills by penetrating and throwing Anthony McFarland to the ground.

“It didn’t take long for his presence to be felt. He’s a big man, he comes off blocks,” Tomlin said.

A healthy Ogunjobi could be a difference maker on defense, as he was in Cincinnati last year and during his time in Cleveland. Stephon Tuitt retired, and the next-up duo of Chris Wormley and Isaiahh Loudermilk hasn’t been noticeable in camp. That could make Ogunjobi’s signing significant — if he plays as he did on Monday.

“I am trying to get back into the swing of things. I haven’t been out there since Jan. 16,” Ogunjobi said. “The best thing is to start fast, but there is a game speed. You have to get acclimated, but it felt good to get back out there and get going.”

Ogunjobi also played inside in the nickel, where he might fit in best.

2. Mason Rudolph has yet to throw an interception in training camp in two weeks, which is significant. Taking care of the ball will be one of the main factors in deciding the competition for the starting job.

For Rudolph’s sake, he better hope that two snaps at the end of practice on Monday don’t have a significant impact on the race. Running third-team during the goal line period, Rudolph had two bad quarterback/center exchanges with Nate Gilliam that Tomlin was not happy about. It was hard to tell whose fault the mistakes were, though two in a row is very unusual and typically points to the center. But that matters not to Tomlin. He was mad.

3. The defense won its seventh consecutive Seven Shots drill to improve to 7-1 in camp (in one practice they didn’t run Seven Shots, and the other was closed to the media).

I keep seeing this from Pickett — he’s the best QB they have throwing on the run and I am talking about designed sprint-outs.

4. Trubisky showed some frustration during a team period when he threw high but catchable balls to both Chase Claypool and Calvin Austin III. Claypool came across the middle and was covered by Ahkello Witherspoon and a trailing Robert Spillane when he couldn’t hold onto the ball. The very next rep, Austin got a step on Levi Wallace but dropped the pass.

Trubisky turned and walked to the bench in disgust as he swung his helmet through the air. It was something similar to what Trubisky did when he went 0 of 4 in a team period last week. What made it worse was that Rudolph came in for second-team reps and promptly got a pair of nice catches, including one from Anthony Miller and another from Miles Boykin.

5. Matt Canada’s offense is supposed to have more downfield throws than we’ve seen in past years. We haven’t seen that yet, but what has become more noticeable by the day are the jet sweeps, especially with Austin.  Even though Myles Jack and Spillane showed off good speed on plays that resulted in no gains, there was one red zone play where Austin took a jet sweep that confused the defense so badly that he was untouched walking into the end zone.

Those jet sweeps aren’t going anywhere this year like they disappeared the past two seasons, folks. Get used to it.

6. During the special teams period, Tomlin was trying to make it very uncomfortable for incumbent punter Pressley Harvin III but instead might have rattled backup Cameron Nizialek as well.

The period saw a pair of pooch punts by each punter that turned out well. When they flipped the punters around and put their heels on the end line, everything changed. Tomlin stood by each punter, recommending they get the punt off fast. They did so, but other than Nizialek’s 50-plus yarder, there were a lot of junior varsity-caliber punts by both, and Tomlin was twisting the knife after each one.

“Aw, shit,” he said after a short one by Harvin. “Niz, not good,” after a bad one by Nizialek. And the best of all, toward special teams coordinator Danny Smith after the final bad boot: “Ah shit, Danny, that’s another bad punt.”

7. The offensive line had a really good showing on a day where the theme of practice was physicality. A lot of that physicality came from the interior of Kevin Dotson, Mason Cole and James Daniels. Now, they weren’t flawless, but they have slowly gotten better as camp has gone on. Cole, for one, made a couple of nice goal line blocks in that period and was able to bounce Snell for a 20-yarder in a short-yardage situation. Now, he did get railed by Ogunjobi on one rep, so there is that.

8. For how good Pat Freiermuth’s hands are, the rest of the tight ends are downright bad. Rader, Heyward and Zach Gentry continue to drop balls in critical times. I am not sure there has been a practice where one of them hasn’t dropped the ball. Gentry and Rader are really good blockers and can be productive there but, at this point, to think anybody except Freiermuth can be counted on is foolish.

9. Speaking of the tight ends, we saw a lot of three-TE sets in the goal line drills. If Gentry and Rader can’t catch, they surely will help out with this if the Steelers choose to dress three tight ends. Throughout this camp, there have been more three-TE sets than we’ve seen in years. It might mean something. It might not.

10. The Steelers signed outside linebacker Ron’Dell Carter, and he quickly jumped into the action, dominating one-on-one linemen drills against Jordan Tucker. … Genard Avery is quietly having a good camp. He’s physical and quick and once again showed up time and time again on Monday. Avery is easily the No. 3 outside linebacker at this point in the game. … Cam Heyward disposed of Green in back-to-back linemen drills. Tomlin called for a second one after Heyward shoved around him, and it was much the same. … Buddy Johnson can sure hit. He knocked the helmet off Mateo Durant with a tackle. But he showed a little better presence in coverage. … With Derek Watt out with shoulder soreness, Heyward played fullback.