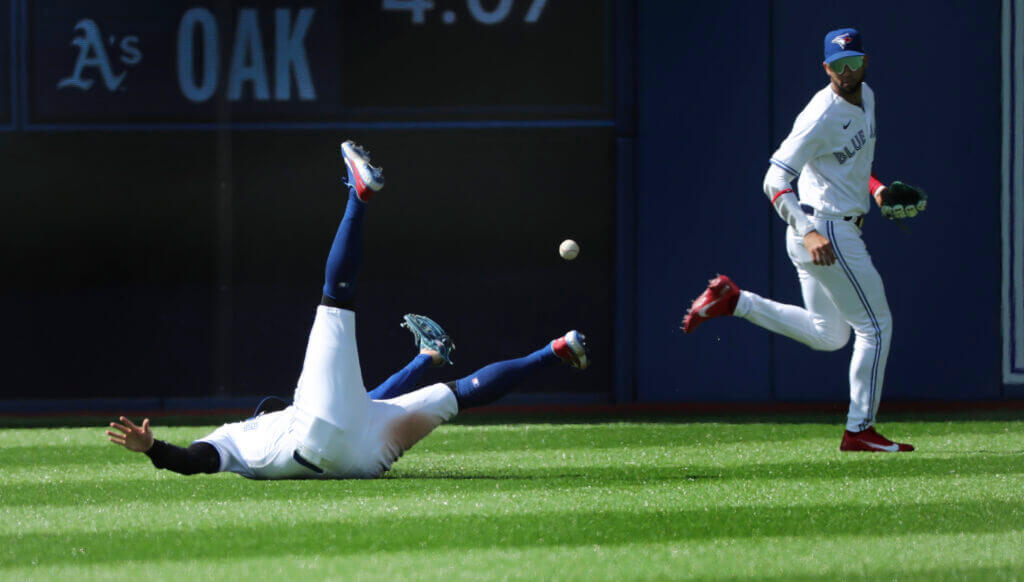 TORONTO — George Springer sat in centre field, legs spread out, his glove resting in between them.

Moments earlier he attempted a diving catch on a bloop fly ball from Los Angeles Angels centre fielder Mike Trout. Springer was there in time and got a glove on it, but the ball popped out on impact as he landed, allowing a run to score when Lourdes Gurriel Jr.’s one-hop throw couldn’t be corralled by catcher Danny Jansen in the seventh.

The image of Springer sitting on the turf looking both exhausted after the dive and annoyed that he couldn’t squeeze the ball was a fitting one that summed up a disappointing weekend for the Blue Jays, who were swept by the Los Angeles Angels when they won 8-3 on Sunday. The deflating result drained the good vibes accumulated after a 6-1 road trip through New York and Boston.

This pattern of a good week followed by bad week, rinse and repeat, has been well established for the Blue Jays. Perhaps starter Ross Stripling, who allowed three runs on seven hits with six strikeouts in six innings, summed it up best.

A little bit of booing from Jays fans after what should be a routine grounder to end the inning turns into another Angels run pic.twitter.com/sZlicgiPWj

“The word that’s going to follow the 2022 Blue Jays for years to come is streaky, right?” he said.

“We’ve had more highs and lows this year than any team that I’ve been a part of,” said Stripling, who was part of the 2017 104-win Los Angeles Dodgers team that lost 11 games in a row in September. “You’re not going to see us get too down because, after lows, we’ve had a lot of highs, so I think we’re ready to start playing good baseball again. Coming off a really good road trip, and you get swept by the Angels, we didn’t expect it, but they came and punched us in the mouth and took three from us.”

It’s difficult to pinpoint why a team with as much talent as the Blue Jays have been consistently inconsistent. They have two starting pitchers who could receive Cy Young Award votes. The offence ranks in the top five in baseball and is above average, per wRC+ (115). The defence, while shaky lately, has taken a step forward this year. The bullpen has been among the best in the American League since July. Yet, all this hasn’t been enough to produce sustained runs we’d expect of this calibre of a club. The less-than-the-sum-of-their-parts summer is now threatening to stretch into fall.

When asked why he thought his team is streaky, Stripling gave it some careful thought, discussing individual streakiness, the marathon baseball season and how performance can fluctuate depending on how the body feels on any given day, before concluding, “I don’t have a real answer to that, just kind of the way it goes,” he said.

That’s fair. It’s not Stripling’s mystery to solve. This offseason, that’ll fall on the front office who will need to reckon with why these Blue Jays have had more ups and downs than the latest thrill ride at Canada’s Wonderland. For now, however, the team will just have to ride out this roller coaster season and hope they’re inching toward the top of the hill at just the right time rather than barrelling down the free fall.

If this latest valley is assumed to be countered with another peak, at least they do have the schedule to do it, with six upcoming games against the non-contending Cubs and Pirates, though as this weekend against the Angels showed, lining up against a below-.500 club doesn’t guarantee wins.

No excuses now, though, the Blue Jays need to find ways to get wins during this soft part of their schedule to at least give them some cushion. Sitting just 1 1/2 game up on Baltimore for the third wild-card spot and 1 1/2 game back of Tampa for the first wild-card spot, 19 games in September against both clubs loom as a make-or-break stretch of their entire season. Put simply, the runway is simply running out to ride these highs and lows.

“Look at the standings and understand that every game is important,” Blue Jays interim manager John Schneider said of how to get the best out of his team in the stretch drive. “Three hours out of your day needs to be completely focused on trying to win. That’s the goal moving forward.”

If things don’t end well for the Blue Jays, this Angels series will be viewed as a missed opportunity. The Angels have an offence that’s 10 percent worse than league average. Yet, over three days in Toronto, they outscored the Blue Jays 22 to 3.

In a vacuum, two of three losses can be viewed within a context that at least makes them explainable, though that likely falls on deaf ears to a frustrated fan base that expected more. On Friday, the Blue Jays arrived around 3 a.m. after a long game in Boston and looked like a team that hadn’t slept much before a 12-0 rout. On Saturday, they faced Shohei Ohtani, a unicorn talent and among the best pitchers in baseball. Ohtani shut them down, despite a brilliant one-run performance from Alek Manoah that afforded them every chance to win.

On Sunday, though, they faced off against left-hander Tucker Davidson, who had a 6.23 ERA entering the game. He walked five, yet held them to one run on three hits over four innings with five strikeouts. It’s a continuation of a puzzling season-long pattern where they struggle against lefties. On Sunday, they simply didn’t time up the hittable offerings.

“We missed our pitches to hit and that was kind of the key and the theme of the whole series,” Schneider said.

Stripling started and ended strong on the mound. In the middle innings, he gave up a two-run home run to Luis Rengifo and a solo shot to Kurt Suzuki, neither of which are typically power hitters. Matt Chapman hit an RBI double in the fourth that nearly left the yard to make it 3-1. But, Toronto couldn’t capitalize on their chances, grounding into two double plays and going 1-for-9 with runners in scoring position.

A rarity lately but the bullpen couldn’t keep the score close, as Adam Cimber and Tim Mayza allowed three runs in the seventh. A Gurriel triple scored one in the seventh to make it 6-2, but the Blue Jays gave that run right back in the eighth when Vladimir Guerrero Jr. couldn’t hold onto a routine throw for the final out and a run scored. Boos from the fans rained down after the misplay, a sign of the grim times at the Rogers Centre. When George Springer homered in the ninth inning to make it 8-3, it was too little, too late. The home run jacket didn’t make an appearance, which feels fitting for a team going through it.

Even after the lacklustre performance, Schneider said he isn’t the type to go into the clubhouse to perform some dramatic, only-in-movies-type gesture. He said, rather, it’s up to the players — particularly the leaders in the room — to right the ship.

“You got to be consistent and you got to understand that it’s a really talented group and there’s going to be ups and downs over the course of the season,” he said. “Over our last 10, it’s good and the sequencing of it sucks … I’m never the type of guy that will go in there and flip a table. At this point, it’s up to the players to say, ‘this is not good enough.’”

Stripling agreed at such a pivotal point of the year, it’s the leadership group that has to direct the way.

“We have good leaders in the locker room that we’ve relied on all year to be vocal and to lead by example,” he said. “In times like this, when we got 30-something games left and every game matters, those are the guys that you look to for leadership. We’ll do the best we can, but at the end of the day, we come out tomorrow and play a winnable game. So, flush this one and get ready to get after it against a new team.”

If there is a positive the Blue Jays can draw on right now, it’s that every time they have hit a low point, they’ve climbed out of it. They’ll need to do that once more, and — stop me if you’ve heard this before but — try to sustain that momentum.

“We do the little things and as cheesy as that sounds, you show up, play with your hair on fire, ready to win a baseball game, and most of the time, it has turned for us, right?” Stripling said. “We’re too good for it not to. So, got to expect a talented roster like this will start playing good baseball again and things will pick up because it has through 125 games. I think just show up ready to play good baseball and trust that things will start getting better for us.”