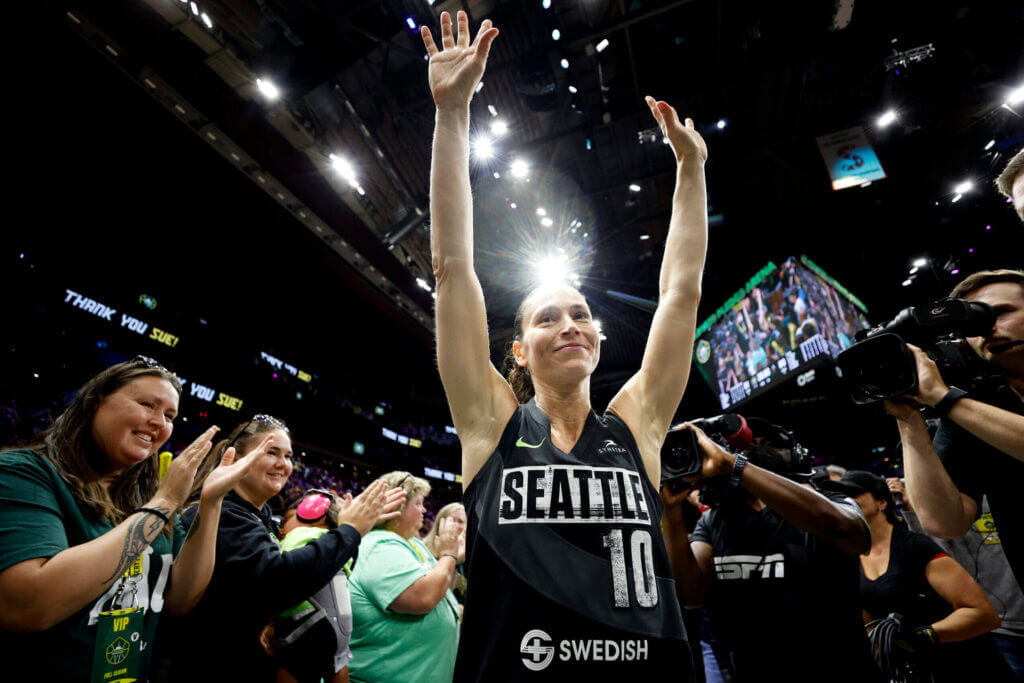 SEATTLE — The second Sue Bird stepped onto the Climate Pledge Arena court for pregame warmups, she was met with loud cheers from the sold-out crowd. There wasn’t a single section in all of the arena that didn’t have some rendition of a “Thank you, Sue” custom-made sign for Sunday’s event. UConn, Team USA and two decades of Seattle Storm jerseys with “Bird” embroidered on the back roamed the concourse.

A row of her family and friends, including fiancée Megan Rapinoe, lined the tunnel leading out onto the court. The usually stoic Bird buried her head in her hands, then clasped her hands together, appearing to try to hold back tears as she was announced before the game to a standing ovation. She mouthed, “Thank you so much.”

And when the game ended, not a single fan appeared to have exited the arena. Both Storm and a few Aces fans remained, standing and clapping as Bird hugged her teammates and opponents, understanding this was an iconic moment in WNBA history: the last time Bird suited up in a Storm jersey in front of a home crowd during the regular season.

Bird then took the mic and addressed the crowd.

“I just wanted to say from the bottom of my heart how thankful I am not only for today and all of you showing up and supporting us but for 21 years,” she said. “Through a player’s career, there’s always opportunities to leave, and this place is not only where I’ve played but it’s where I’ve called home.”

The Storm and Aces have both already clinched playoff spots, so the 89-81 Aces’ win didn’t take away much from the celebration of Bird. Bird scored nine points with six assists in her regular-season finale, while Breanna Stewart (35 points) and A’ja Wilson (29 points) showed why they’re in MVP contention.

The largest crowd (18,100 fans) in Storm franchise history showed up to properly send off Bird before retirement. Even a young fan tried to hand her a white flower during the game.

It’s been 7,415 days since Bird was selected No. 1 in the 2002 Draft and began her journey in Seattle, where she became a WNBA icon. Her career is marked with a record 13 All-Star selections, four WNBA championships and five Olympic gold medals.

“The beauty of Sue is yes, there is the UConn family, but I was with Sue in Russia, miles away,” said Storm assistant Pokey Chatman, who coached Bird overseas. (Chatman filled in Sunday for head coach Noelle Quinn, who was not present because of COVID-19.) “It’s the people she’s touched all over the world. It’s the people on other teams. … The respect that she has in a position that’s really difficult, people inside the basketball world get that.”

Though this isn’t officially the end of her playing career as the playoffs loom, Sunday felt like a farewell chapter.