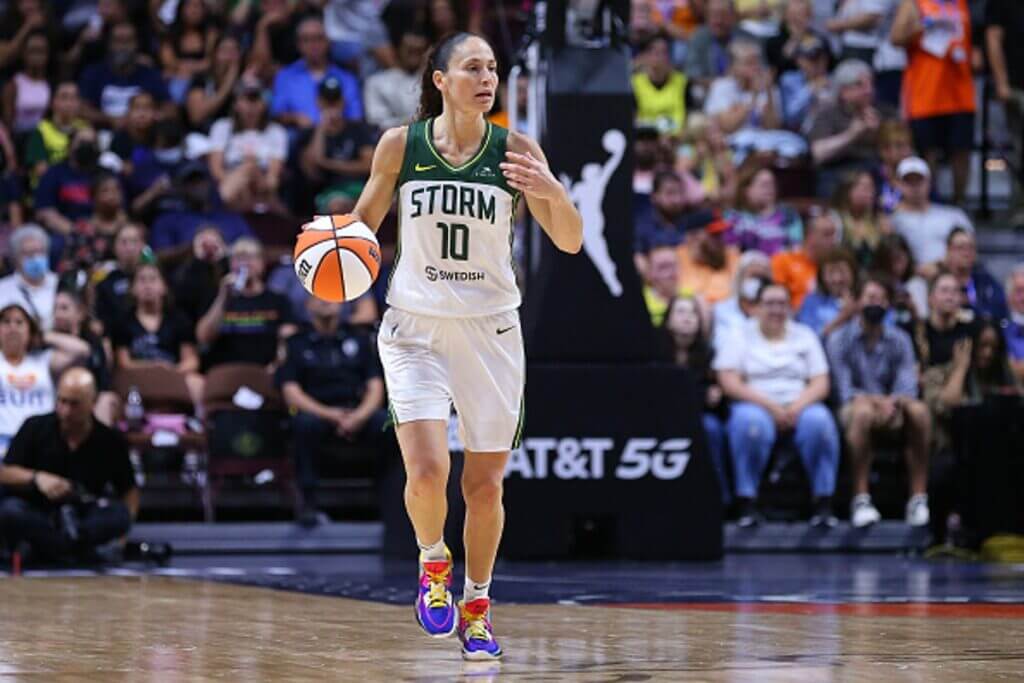 Sue Bird will hang up the sneakers at the end of the 2022 WNBA season. Her retirement announcement on June 16 marked the imminent end of an era. One of the most decorated women’s basketball players is leaving the game.

Bird epitomizes greatness – winning wherever she took the court. For the UConn Huskies in college. For the Seattle Storm in the WNBA. For Team USA at international competitions. Everywhere Bird played, she was must watch.

On Sunday, Bird will play her final Storm home game against the Las Vegas Aces. While there’s a game to be played, it will be a celebration of one of the WNBA’s central figures.

From the no-look passes to the personal accolades and championship titles, Bird’s 21-year WNBA career can be parsed into several standout moments. Below are the top highlights of Bird’s legendary career:

Prior to 2004, Bird made the playoffs in her rookie season (2002) before losing in the Western Conference semifinals to the Los Angeles Sparks. In 2003, the Storm didn’t qualify for the playoffs. Game 3 of the 2004 Western Conference finals saw Bird raise her game in the pivotal moments. In 33:03 minutes played, Bird recorded a double-double of 10 points and 14 assists on 57.1 percent shooting from the field. It was Bird’s first career playoff double-double. She was one of four players with double-digit points en route to the Storm dominating the Monarchs 82-62.

Game 3 of the Western Conference finals proved to be the start of Playoff Bird. Where clutch performances became the norm.

It was a year to remember for Bird. At the 2004 Olympics in Athens, Bird was part of the gold medal-winning U.S. women’s basketball team. It was Bird’s first of five career Olympic gold medals.

In the fall, Bird and the Storm won the WNBA championship — Seattle’s first in franchise history. After the Storm defeated the Monarchs, they beat the Connecticut Sun in the 2004 WNBA Finals in three games. Throughout the playoff run, Bird played in four elimination games. In those four contests, she posted averages of 10 points and 6.5 assists on 46.2 percent shooting from the floor.

Bird became the 11th player to win an Olympic gold medal, NCAA title and WNBA championship, joining legends such as Swin Cash, Tamika Catchings, Cynthia Cooper and Kara Wolters. To date, there are only 13 players to achieve this feat.

Sue Bird and Diana Taurasi. Teammates at UConn and Team USA. Rivals in the WNBA.

They’ve squared off in several memorable games over the years. But none more dramatic than Game 2 of the 2010 Western Conference finals.

What happened after remains one of Bird’s most clutch shots. Taking advantage of Storm forward Lauren Jackson’s down screen, Bird converted a 3-pointer on the near side with 2.8 seconds left, giving Seattle a 91-88 lead. Taurasi attempted a game-tying 3, which failed to convert.

Bird was 5-of-14 shooting before knocking down that triple. Her 16 points were enough to knock out Taurasi and the Mercury, advancing to the WNBA Finals.

Bird went on to win her second title, sweeping the Atlanta Dream.

Beyond the championships and gold medals, Bird’s most impressive accomplishment is becoming the all-time WNBA assist leader. Her court vision — finding her teammates to create shots — is unmatched. Whether it’s behind-the-back, running downhill in transition or no-look, Bird racked up the highlight-reel assists over the years.

Before Bird, guard Ticha Penicheiro held the assist leader title. On Sept. 1, 2017, when the Storm played the Washington Mystics, Bird etched herself into WNBA history. She tossed a lob pass to Carolyn Swords, who scored the field goal, giving Bird the honor of all-time assist leader with 2,600 assists.

On July 9, 2021, Bird became the first WNBA player to secure 3,000 career assists. Taking on the Mercury, Bird assisted on a Mercedes Russell bucket. With 3,208 assists and counting, Bird is 609 assists ahead of Penicheiro. Chicago Sky guard Courtney Vandersloot is third on the all-time list with 2,365, 843 behind Bird.

Safe to say Bird’s record will remain untouched for the foreseeable future.

Seattle went on to sweep the Washington Mystics in the WNBA Finals, giving Bird her third championship. Her clutch performance in Game 5 against the Mercury stands out from this playoff run, once again defeating Taurasi in an elimination game.

The 2020 WNBA season will be remembered for a multitude of reasons. The global COVID-19 pandemic forced the WNBA to complete a shortened 22-game season in a bubble at the IMG Academy in Bradenton, Fla. WNBA players dedicated the season to social justice — calling attention to the anti-Black racism occurring in the U.S.

For Bird, the 2020 season saw her return to action, after missing the entire 2019 campaign with a knee injury. She underwent surgery on her left knee, forcing her to be sidelined.

Started off the series with a 16-assist game.

After going 18-4 during the regular season, the Storm went undefeated in the playoffs. Bird, a catalyst of the Storm’s success, continued to be the dominant floor general during the WNBA Finals against the Aces. In Game 1 of the Finals, Bird recorded 16 assists, a WNBA playoff record at the time. Her playoff average of 9.2 assists per game remains the highest in her career.

Given the adversity of coming back from injury and playing in the bubble, this remains one of Bird’s triumphant feats.

‘Community’ Stars Insist ‘Legitimate Conversations’ About a Movie Are Happening