Surprised that Ivanka Trump was almost head of the World Bank? You shouldn’t be 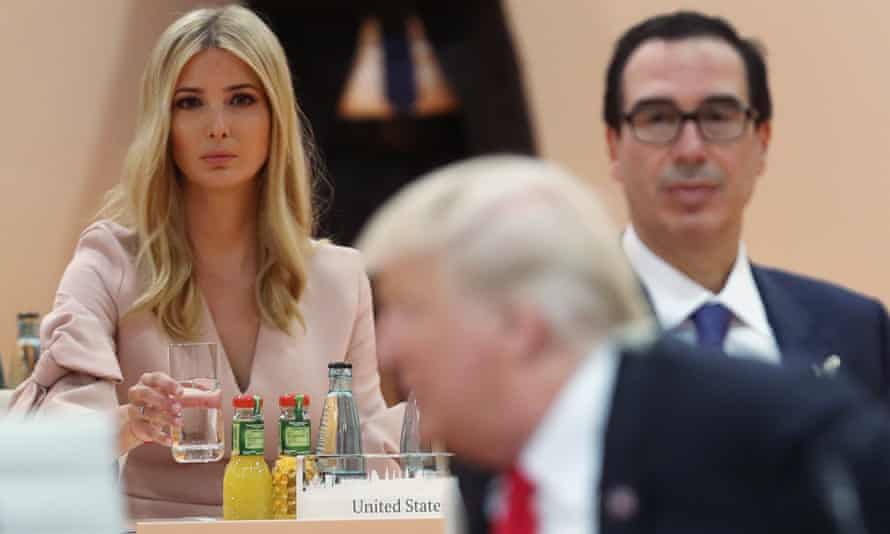 Donald Trump wanting his daughter to have the top job at the World Bank is no great surprise. What intrigues me is the thought of Steven Mnuchin blocking it

It’s no secret that Donald Trump has something of a soft spot for his eldest daughter, Ivanka. He’s constantly tooting her horn and gushing over her talents. Not only does Ivanka have a “very nice figure”, Trump has boasted, but “she’s very good with numbers”. She’s so good at all that numbers stuff that the former president even considered her for the top job at the World Bank in 2019. And that wasn’t just a fleeting fantasy, either; according to a recent report by the Intercept, Ivanka’s nomination for World Bank president “came incredibly close to happening”. The reason it didn’t is that Trump’s treasury secretary, Steven Mnuchin, intervened. Which, by the way is a rather different story from the one Ivanka tells. The former first daughter has said she passed on the job because she was very happy with the high-powered White House position she’d appointed herself to.

I can’t say I’m surprised that Ivanka was a stone’s throw away from a(nother) prestigious job she was laughably unqualified for. What does intrigue me is why Mnuchin might have blocked her nomination. Trump has a knack of surrounding himself with sycophants who do his bidding; what could have prompted Mnuchin to break ranks? Could it possibly be that the guy finds brazen nepotism distasteful? Alas, it seems unlikely, considering he’s a product of it himself. Mnuchin’s first job out of Yale was at Goldman Sachs, where his dad just happened to be a general partner. According to a New York magazine profile, Mnuchin’s colleagues at Goldman Sachs didn’t consider him “especially book smart”, but that didn’t stop him becoming partner himself. The same profile notes that his elevation to partner came at the expense of an African American trader from a working-class background who struck one colleague as being “much smarter than Steven” and having “accomplished a lot more”. I don’t know how fair that profile is, but I’d bet both my kidneys that Mnuchin isn’t someone who stays awake at night fretting about nepotism.

So perhaps Mnuchin was afraid Ivanka’s appointment might be unethical or make the US look ridiculous? Again, these theories seem unlikely. Mnuchin and his (third) wife, the Scottish actor Louise Linton, don’t seem particularly bothered by ethics or looking ridiculous. Mnuchin, after all, is nicknamed the “foreclosure king” because he made a ton of money evicting elderly people from their homes. Linton, meanwhile, is notorious for having written a “white saviour” memoir full of dubious claims. The pair haven’t exactly kept a low profile since getting together. Remember when the lovebirds did a very weird supervillain-style photoshoot with a sheet of new dollar bills? Not exactly something someone concerned about optics might do. Then there was the time they took a government plane to see a solar eclipse in Kentucky. Linton posted the trip on Instagram and hashtagged all the designer labels she was wearing: “#rolandmouret pants”, “#tomford sunnies”, “#hermesscarf”, “#valentinorockstudheels”. The whole thing was #inverybadtaste.

The pair haven’t exactly tried to tone it down since then. Linton recently made a movie called Me You Madness where she plays a “materialistic, narcissistic, self-absorbed misanthrope” who hates commercial air travel, loves high fashion and eats men for fun. It also contains spider sex. Mnuchin has been very supportive of the movie, calling the escapades of a greedy sociopath “highly entertaining”. Again, he doesn’t seem like the sort of guy who cares what other people think. Rather, he seems like the sort of guy who actively supports narcissistic blonds (Linton looks quite a bit like Ivanka) with white saviour complexes and enormous egos doing whatever the hell they like. If he blocked Ivanka’s nomination then I’ll once again wager my kidneys that it wasn’t for the common good, but it was somehow for his own good. After all, nepotism simply isn’t a problem for people like Mnuchin. It’s just the way the world works.

The Guardian view on the Nobel prize in literature: beauty out of universal loss

I don’t want a life hidden by security, but we need to prevent violence against…

What’s the value of a confirmatory PCR test?