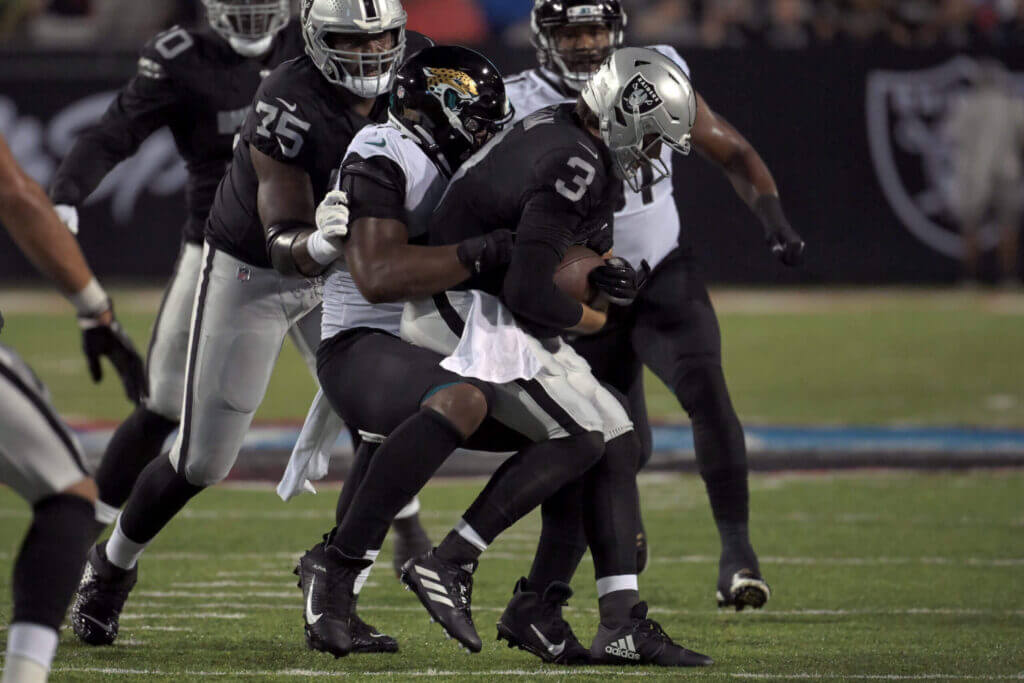 Who were the big winners for the Raiders in Thursday night’s preseason opener?

That’s my list of experienced free-agent tackles whose agents may have gotten a text from general manager Dave Ziegler on Friday morning after a less-than-inspiring performance by his offensive line against the Jaguars. Brandon Parker, who started at left tackle as Kolton Miller was given the night off, made Jaguars rookie Travon Walker look like Cam Jordan, as Parker played a hand in giving up three sacks and a quarterback pressure.

Alex Leatherwood, who is behind Parker in a battle for the right tackle spot, was obviously better by comparison. But the Raiders didn’t have a lot of faith, as they often slid the protection toward Leatherwood to help him out. And on the few plays they didn’t, he was beaten pretty soundly.

Raiders coach Josh McDaniels was not outwardly panicking when he talked to reporters Friday morning. But the fact that Parker had gotten most of his reps at right tackle during training camp was no excuse for his struggles on the left side.

“A lot of guys have to play multiple positions, so that can’t be part of the problem,” McDaniels said. “There were a few things, obviously, that Brandon can do better. There were also a few things that we were trying to do offensively that we didn’t do very well that didn’t have anything to do with Brandon. …

“Alex does what he always does. He comes in there and competes and tries to do his job the right way. He has just put his head down and tried to get better. And the snaps he was in there for, I thought that he did the same thing.”

The rest of the offensive line fared better, especially in run blocking. Lester Cotton held on to his current grip on the right guard spot, as his physicality in the run game overshadowed a couple of glitches when the Jaguars ran some stunts and got pressure up the middle.

“We did some decent things,” McDaniels said. “We played hard. In the running game, we were able to create some opportunities for the backs to get started. And we probably missed some opportunities as well (because of) communication, double-teams and a few techniques that Jacksonville uses that we haven’t seen yet. …

“There were a few things in the protection where we were just a hair late.”

And that’s what the preseason is for. Working out the kinks. But one has to wonder if even a body shop could smooth out the edges with Parker and Leatherwood.

The offensive line has been the biggest concern since the Raiders traded for Davante Adams, signed Chandler Jones and became Super Bowl contenders. They can surely survive with an interior front line featuring some combination of Andre James, John Simpson, Cotton and rookie Dylan Parham. Miller is above average at left tackle. That leaves Parker and Leatherwood in the spotlight at right tackle, and there also has to be a little concern about Parker backing up Miller at left tackle after he was abused Thursday night.

The 6-foot-7, 305-pound Parker was a third-round reach by Jon Gruden and Tom Cable in 2018, and they quickly realized that the jump from North Carolina A&T to the NFL was much bigger than they envisioned. He worked hard to be a serviceable backup and then started 13 games last year due to injuries. The new regime liked his size and saw enough on film to give him a contract extension this offseason.

It’s just one preseason game, but they have to be questioning that a little bit today.

I thought the Raiders would wait to see which tackles were waived when teams make their cutdowns to 53 players at the end of the month, but Thursday night’s game against a Jaguars team that rested all of its top non-rookies changed my thinking. It’s time to add an experienced right tackle off his couch and make the Parker-Leatherwood competition one for a backup, swing-tackle spot.

The Raiders are almost $22 million under the salary cap and can definitely afford someone like Williams. He was a second-team All-Pro in 2017, can play both right tackle and guard, and started all 33 games the last two years for a Bills team that was a coin flip away from going to the AFC Championship. He turns 30 on Aug. 31.

The Raiders lost the versatile Denzelle Good to retirement when camp started (it was more mental than any physical issues coming back from knee surgery), and Williams would actually be an upgrade over Good.

Other than the offensive line’s pass blocking, the 27-11 win over the Jaguars was a smashing success for McDaniels. The offense played with tempo and established the run, and the defense was physical. The Raiders only had one penalty in the first half before a lot of guys who we’ll never hear from again took the field.

Josh Jacobs had more preseason carries Thursday night than he had (four) in his first three years with the Raiders. McDaniels said he likes to give all of his backs carries in the preseason, but it was still an eye-raising move given Jacobs’ durability issues in the past to have him play two drives against Jacksonville’s backups.

Jacobs looked very good (30 yards on five carries, 14 yards on two catches), but so did rookie Zamir White (52 yards rushing on 11 carries). My prediction of a committee approach at running back is coming true early. I am sure other teams around the league were surprised to see Jacobs playing, and while I don’t know why the Raiders would trade him, he is definitely available. Either way, Jacobs is not going to be able to put up the numbers he would like to in what became his contract year after the Raiders passed on the fifth-year option.

Running back Austin Walter looked very good in the second half, rushing for 49 yards and a touchdown on eight carries. The Rice product had 27 career carries with the Giants, 49ers and Jets over the last three seasons. Safety Matthias Farley, a seven-year vet who once started 15 games for the Colts in 2017, also made an impression.

“He plays hard,” McDaniels said. “When you watch him on film, he’s been this way his whole career. He is a competitive guy who can contribute in the kicking game and is an eager tackler. He got called for the one penalty last night, but he was just coming up there and being aggressive. I like his physicality, he is a good teammate who knows what his job is and he competed at multiple roles last night.”

Discoveries in Pompeii reveal lives of lower and middle classes