Tuukka Rask has retired. Zdeno Chara is likely to follow.

Whether Patrice Bergeron will join his fellow 2011 champions in retirement remains to be seen.

Everything the Bruins do to reload for 2022-23 depends on what their captain wants to do. There is a lot to do. Here are the top priorities:

1. Get an answer on Bergeron’s future

Bergeron can still play. He is the slam-dunk favorite for the Selke Trophy. He remains a scoring threat. He is a No. 1 center in all situations.

If he wants to continue playing, he would be fine with signing a one-year extension. He would be eligible for performance bonuses.

Bergeron, though, is the type of player and person who is proud of excellence. Slippage is not a quality he would tolerate. Bergeron won 52.8 percent of his postseason faceoffs. It was his lowest percentage in the playoffs since his rookie season.

Bergeron was heavily influenced by Mark Recchi’s out-on-top retirement in 2011. Bergeron could leave the game without any part of his legacy being blemished. That may be important to him.

“I hope not,” coach Bruce Cassidy said Saturday when asked if he thought the 3-2 Game 7 loss was Bergeron’s last. “He means so much to this franchise. We all want him back. Only he can answer that. I have no inkling. I have not addressed it with him. It’s not my place in the middle of the season. He’ll make that decision going forward.”

If Bergeron stays, the Bruins are better equipped for postseason contention in 2022-23. He should still be able to fulfill all of his on-ice responsibilities.

If Bergeron walks, Brad Marchand would take over the captaincy. Marchand is ready for the title, regardless of his discipline history. But Bergeron’s exit would still create a massive vacuum in leadership, performance and presence.

This is purely Bergeron’s call, with influence from his family. Circumstantial evidence — Marchand’s emotions after Game 7, Rask’s return for one last ride with No. 37, his three kids joining him at the TD Garden podium for a press conference after Game 4 — points to a goodbye.

Now what for Patrice Bergeron? https://t.co/BX4k3MhkUu

2. Regardless of Bergeron’s decision, reinforce the center position

If Bergeron retires, the Bruins could apply his $6.875 million average annual value toward help in the middle. Even if he re-signs, the Bruins still have to explore the center position. Vincent Trocheck, Nazem Kadri, Andrew Copp and Max Domi could be available on the free market.

Erik Haula was very good since Jan. 1 as the No. 2 center for Taylor Hall and David Pastrnak. But Haula (one goal, two assists) was inconsistent against the Hurricanes. Haula is under contract for one more season.

Charlie Coyle is a good No. 3 center. But he did not have chemistry with Taylor Hall on the second line.

The Bruins once believed Jack Studnicka could be a top-three NHL center. This may be the offseason in which they make their final call: keep or trade the 2017 second-rounder. Studnicka is a restricted free agent.

3. Determine whether Pastrnak wants to re-sign or hit the 2023 market

Pastrnak is signed through 2023. He is on a team-friendly six-year, $40 million contract. One agent speculated the Bruins would have to give Pastrnak a max-term eight-year extension. The Bruins would not have a problem with that. They know how much Pastrnak affects five-on-five offense and the power play.

He is also part of the next leadership core. He may even be the future captain.

Whether Pastrnak wants all of that is his call.

Pastrnak likes the organization. He has never said anything bad about Boston. The fans love him.

But the right wing could, in all likelihood, find a richer deal, albeit a seven-year one, on the free market. If the Bruins identify any kind of wavering, they will have to consider trading the star right wing. They cannot afford to have Pastrnak walk for nothing at year’s end, as John Tavares did to the Islanders when he left for Toronto.

Jake DeBrusk has no power to encourage a trade after signing his two-year, $8 million extension. The Bruins were satisfied with his Round 1 performance. He scored two goals, including one in Game 7, and two assists.

As such, the Bruins are under no obligation to fulfill his request. DeBrusk scored 25 regular-season goals, third-most on the team after Pastrnak (40) and Marchand (32). That is not easy to replace.

Not only can the 25-year-old score, but he can also play both wings, be a net-front power-play presence and kill penalties. That is not the type of player teams trade away simply because he wants out.

Matt Grzelcyk finished the postseason as the odd defenseman out of the lineup. That could be for keeps.

Grzelcyk is one of four left-shot defensemen under contract. Hampus Lindholm isn’t going anywhere. Grzelcyk has higher trade value than Mike Reilly and Derek Forbort. Jack Ahcan, who is a restricted free agent, could pick up some of Grzelcyk’s offensive shifts. Grzelcyk is under contract through 2024 at $3,687,500 annually.

One reason Grzelcyk was out of uniform to finish the postseason, though, was an upper-body injury he fought all year. Whether he needs surgery is unknown. A procedure may dampen some of Grzelcyk’s trade value. 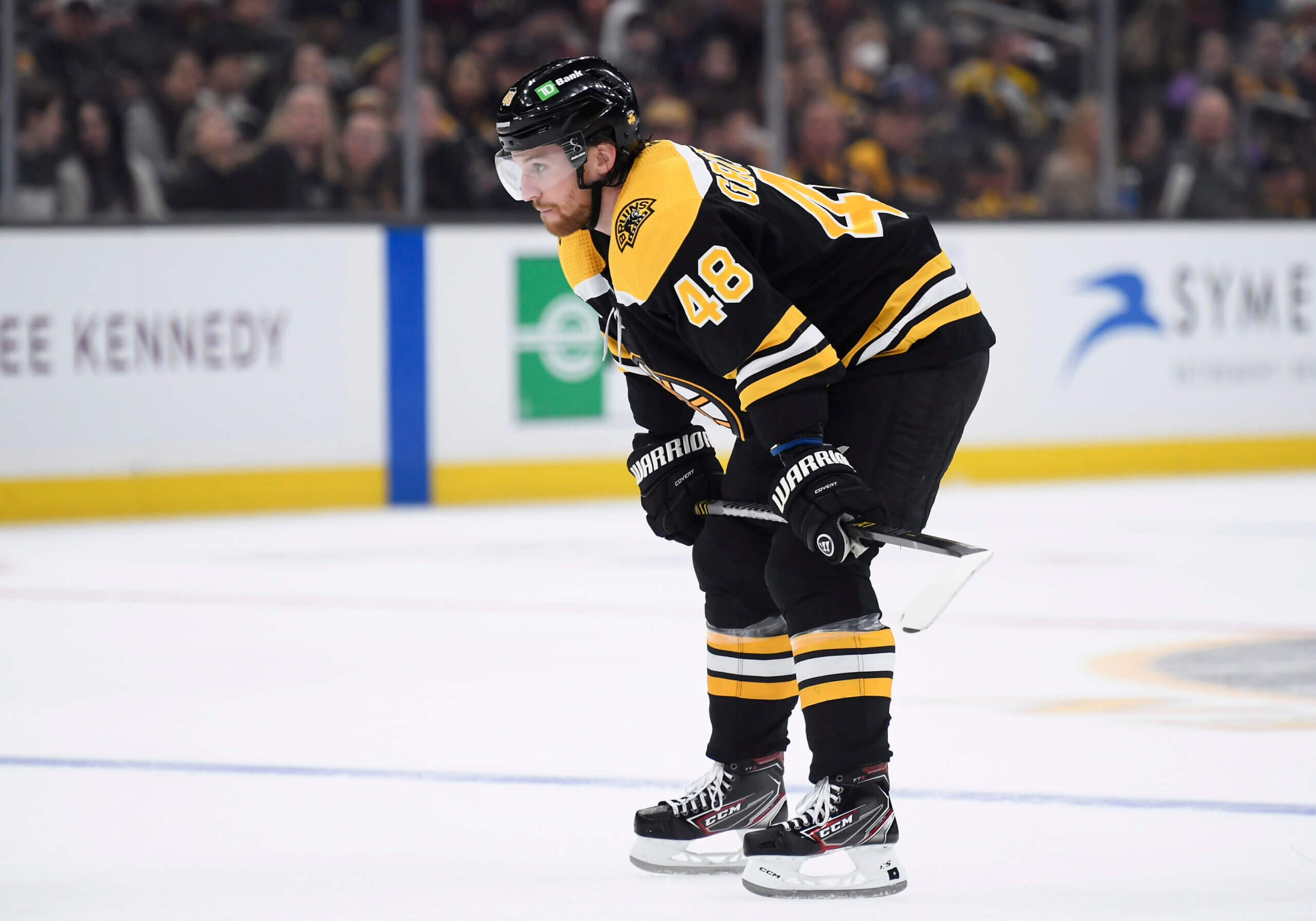 If Grzelcyk stays, Reilly could be on the move. A team could see value in Reilly’s puck-moving touch. Reilly is signed through 2024 at $3 million annually.

One wild card is Jakub Zboril. The 2015 first-rounder will be a Group 6 unrestricted free agent. Zboril was progressing well before suffering a season-ending knee injury. Re-signing Zboril would not be expensive. But the 24-year-old may want to test the market and sign with a team with less depth on the left side. Zboril would not be guaranteed playing time if he re-ups.

All of the five are under contract for one more season. It is unlikely they would be extended. As such, this offseason could be the window in which they bring back a return.

The same cannot be said for Haula, Craig Smith, Tomas Nosek and Nick Foligno. Smith’s fade (zero points, 13 shots, 11:51 average ice time per game) was especially hurtful against Carolina. The third-line right wing was missing his usual energy the entire series, if not for much of the regular season. It’s a good bet he was playing through an injury.

Haula showed bursts, but not enough game-to-game reliability. Nosek was a valuable depth player because of his dependability and versatility. But Nosek was not an offensive presence. Same goes for Foligno, whose $3.8 million average annual value is too steep to carry on the fourth line.

Curtis Lazar was good all season. He could find more opportunity and greater security on the open market, much like Sean Kuraly did with Columbus last offseason. He deserves to find a good deal.

8. See if there’s a path toward acquiring a 2022 first-round pick

Lindholm was worth the price, which included the Bruins’ upcoming first-rounder. But this will be the third time in the past five drafts the Bruins will be without a first-round pick.

The price for first-round re-entry will be through the roof.

Bursting into flower: the growth of sustainable blooms | Wild flowers