Another Capitals season came to its jarring conclusion Friday night in D.C. when Florida’s Carter Verhaeghe scored his sixth goal of the series to vanquish Washington in six games.

The scene that followed was all too familiar.

Caps players slumped over as the opposing team celebrated. Solemn faces at the postgame podium. Claims that the current roster has what it takes, that things could have been different if they’d gotten a bounce here or there.

“You see how we played against the best team in the regular season,” captain Alex Ovechkin said, asked if the core, as a constructed, can win it all again. “We have it, but we just blow it away. It is on us. It is on me, on Backy, on Osh, on Carly. It is on everybody. Kinda fucked up situation.”

That was raw emotion speaking, moments after another season came up short of expectations.

In the days ahead, though, cooler heads figure to prevail and a plan will be articulated by general manager Brian MacLellan, who’ll have a number of big questions to answer this offseason. Among them:

Even after a fourth straight first-round ouster, it’s not an easy decision.

On the one hand, the Caps, who were without Wilson for all but the first 1 minute, 31 seconds of Game 1, gave the Presidents’ Trophy winners all they could handle for lengthy stretches. After three games, Washington led two games to one and, with 2:04 left to play in Game 4, were this close to a 3-1 series stranglehold.

On the other hand, at times, they looked old and plodding as they tried to contain the Panthers’ skilled, quick-strike attack. The Caps also seemed to lack the mettle necessary to “close the door” on a Florida team they’d pinned against the ropes in each of the final three games, all losses.

The knee-jerk reaction might be to blow it up. The reality is that it’s complicated.

When Backstrom re-signed in 2020 and Ovechkin re-upped in 2021, they were given assurances by management and ownership that the team would continue to spend to the salary cap ceiling in attempt to surround them with the talent required to contend. For that reason alone, a tear-it-down rebuild seems extremely unlikely. Then there’s the matter of Ovechkin’s pursuit of Wayne Gretzky’s goal record. It’s going to be one of the biggest stories in sports in the coming seasons, and the Caps aren’t going to do anything to hurt his chances.

What’s the plan in net?

Vitek Vanecek and Ilya Samsonov are both restricted free agents.

Indeed, they showed flashes. But the consistency wasn’t there.

The blame does not fall entirely on Washington’s goalies. That said, they didn’t make enough timely stops in the clutch, in the regular season or playoffs.

It’s not clear how MacLellan is going to handle the goalies. The free-agent market isn’t particularly impressive or deep. There are, however, some trade options that might be worth exploring. The Islanders have Ilya Sorokin ($4 million) and Semyon Varlamov ($5 million) under contract next season, the Kings have Jonathan Quick ($5.8 million) and Cal Petersen ($5 million) and the Blues have Jordan Binnington ($6 million) and Ville Husso (unrestricted free agent). Can MacLellan pry one of them — or another goalie with No. 1 bonafides/potential — away from his current team?

Again, unclear. But this much feels inevitable: After making the risky decision to stand pat at the March trade deadline, change is probably coming to the Caps’ crease this summer.

Can Nicklas Backstrom return to form?

In the next few days, we’ll probably learn more about what Backstrom went through this season. But it was pretty obvious to anyone who watched the 34-year-old center labor around the ice or uncomfortably amble out of the locker room after a game wasn’t himself.

Backstrom, who missed October, November and most of December rehabbing a lingering hip injury, finished with six goals and 25 assists in 47 games. His 0.66 points per game were by far the lowest of his distinguished 15-year career.

Backstrom’s vision and hands remain elite but his skating, at times, proved to be a liability.

What MacLellan and the medical team must figure out is whether another summer of rehab (or perhaps surgery?) can get Backstrom back to where he needs to be. Because if not, that’s a massive issue. And not just because his $9.2 million eats up more than 11 percent of the cap. It also leaves the Caps without a second top-six center to complement Evgeny Kuznetsov.

Will there be a focus on getting younger?

In recent seasons, the Caps have prioritized loading up on grizzled vets. Just look at this year’s deadline additions: 31-year-old Marcus Johansson and 29-year-old Johan Larsson.

Yes, experience matters. But as the Caps are finding out, so does youth and speed, particularly after a grueling 82-game regular season. An infusion of spry legs could help a veteran-laden team like Washington keep up with a younger, faster team like Florida and, in particular, a player like Verhaeghe, whose speed was hard to contain as he racked up a postseason-best 12 points.

The Caps were the second-oldest team in the tournament with an average age of 30.1 years old. The Panthers are right about in the middle at 28.3. At times, the gap felt bigger.

Assuming that’s the direction MacLellan goes, he’s got options. He can go outside of the organization, of course. He also can look inward.

It’s not hard to imagine a scenario in which Joe Snively, Axel Jonsson-Fjallby, Aliaksei Protas, Alex Alexeyev and Hendrix Lapierre are given the opportunity to displace a veteran in training camp.

Whose contracts are up?

The Caps have 10 forwards and four defensemen signed to one-way contracts next season. Add rookies McMichael and Fehervary, both of whom are on their entry-level deals, and Washington is committed to 11 forwards and five defensemen.

The only free agents of note are forwards Johansson and Larsson, defensemen Justin Schultz and Michal Kempny and the aforementioned goaltenders. (It should be noted that Vanecek and Samsonov have arbitration rights, per CapFriendly.com.)

Johansson ($1.5 million) and Larsson ($1.4 million) are reliable veterans, but their roles could be filled by younger and less-expensive options, perhaps from AHL Hershey. Ditto for Schultz, whose ice time declined from 19:01 last season to 16:55 this season, and Kempny, who started the season in the minors before playing sparingly in the second half.

Here’s what the depth chart looks like minus the expiring contracts, from CapFriendly: 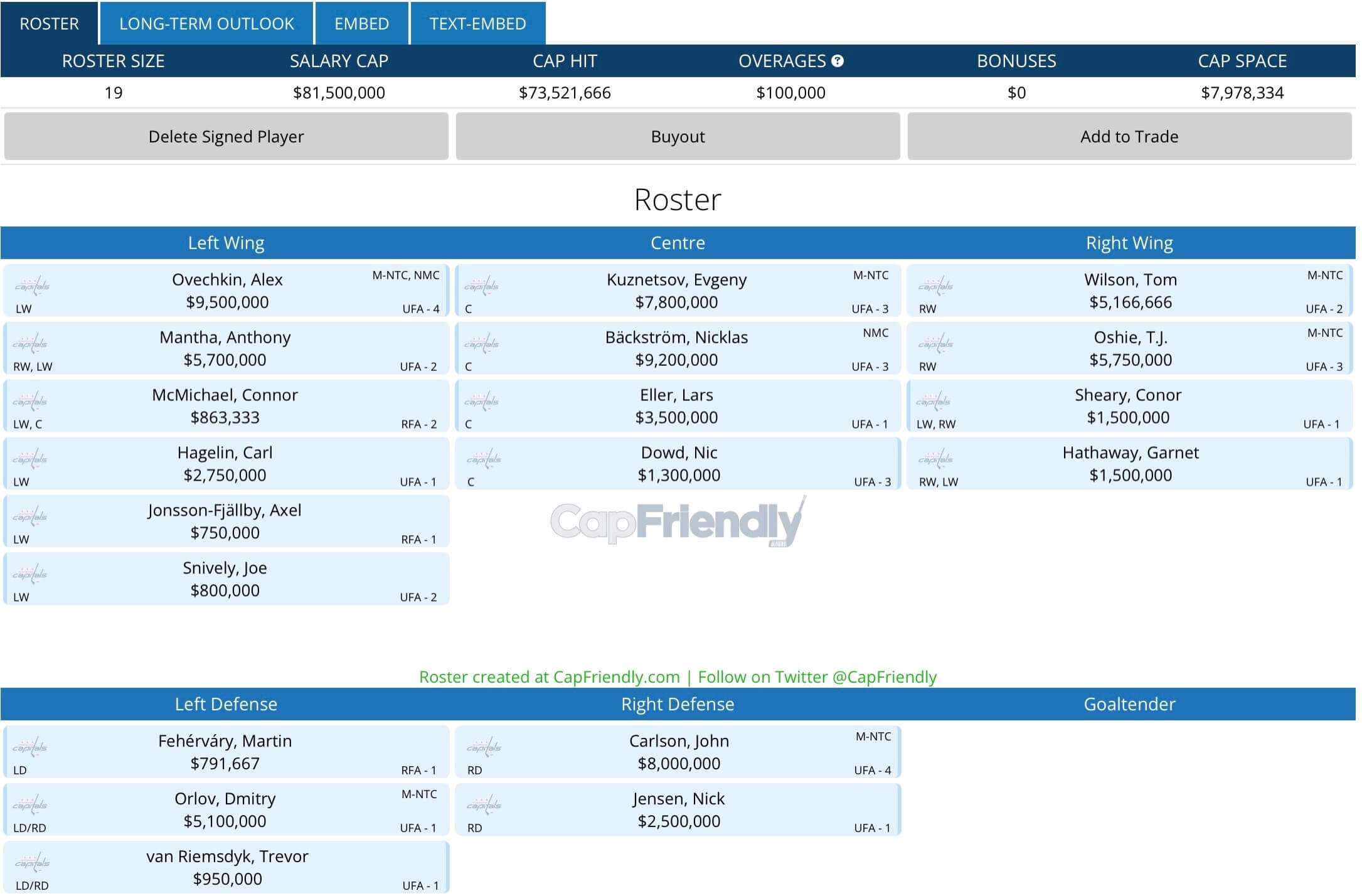 So there figures to be ample cap space for maneuvering, though not many roster spots. Which brings us back to the first question: Will MacLellan opt to continue tinkering or does he make more substantive changes? After a back-and-forth series in which the Caps had several chances to upset the NHL’s top regular-season team, the decision may not be as cut and dried once the emotion of another first-round defeat dissipates.