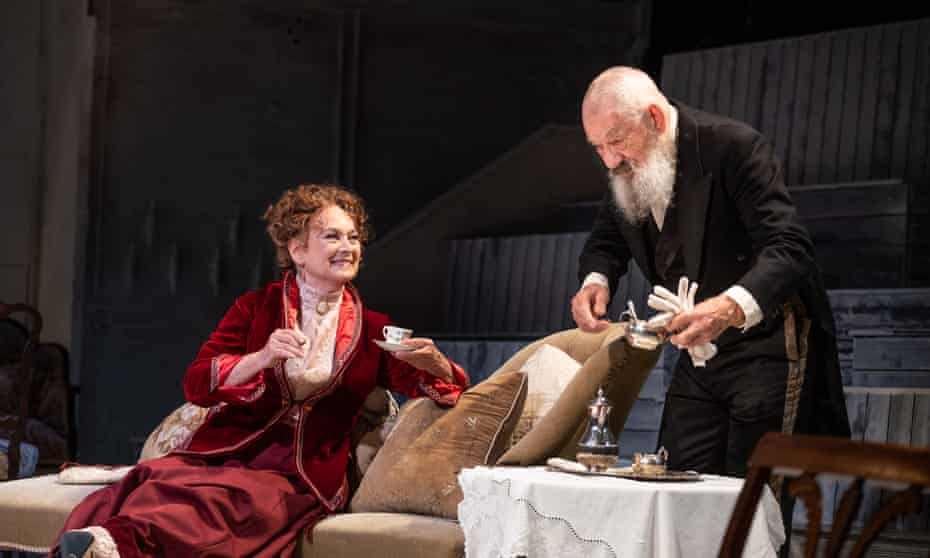 Theatre Royal Windsor
Artfully combining clumsiness with precision, McKellen’s Firs is the highlight of a production marked by arresting gestures and modern parallels

Having recently played Hamlet at around twice the usual age, Ian McKellen returns to the Theatre Royal Windsor in a part for which he is, strictly, too youthful. Firs, the servant in Anton Chekhov’s The Cherry Orchard, is 87. McKellen, five years younger, ages up with shaven head and wiry white loofah beard.

While the Hamlet production was deliberately blind to age and gender, director Sean Mathias casts the same company largely by generation and pronouns: Francesca Annis as Ranevskaya, the doubly bereaved aristocratic matriarch, returning to her Russian estate after a five-year Parisian exile, to find Martin Shaw’s cocky entrepreneur Lopakhin spying property development if the fruit trees are felled. The one interpretative reversal is Jenny Seagrove, who, with cropped hair, scuffed voice and moustache, strikingly plays a middle-aged man, Gaev, though with a subcurrent of gender complexity that feels resonant.

As does the whole show. Early 20th-century characters shadowed by debt, depression, deforestation and death don’t need much modern redressing, but Martin Sherman’s adaptation gives history one small nudge. The generations of servants who have worked the estate are described in Trevor Griffiths’ 1977 version as “serfs”, by Michael Frayn (1978) as “serfs” and “souls”, by Tom Stoppard (2009) as “living souls”, and in Andrew Upton’s 2011 text, “people – owned and exploited”. Sherman, pointedly, prefers “slaves” and “slavery”.

The Pennsylvania-born dramatist also seems to stress the link between The Cherry Orchard and the buried children who haunt so much 20th-century American drama. Annis’s Ranevskaya carries like a slab on her back lost love, to which will soon be added the death of her favourite place.

Mathias’s production is marked by arresting gestures. Informed of deaths, Ranevskaya makes the sign of the cross for each, then embarrassedly abandons the tribute halfway through when understanding that one of the departed has emigrated rather than expired.

McKellen brings to a cameo the same level of intelligent attention he expends on leads. When he creakingly kneels behind Gaev, we fear a humiliating senior moment, but he is stooping to straighten his master’s trouser creasers, a valet’s training still inhabiting a mind with many vacancies. McKellen combines poignantly comic forgetfulness and clumsiness with a clinically precise Parkinson’s tremor and gait.

Among the bores and boors roaming the estate, Shaw’s Lopakhin embodies the prickly egotist who believes that reform involves people becoming more like him, and Asif Khan finds fine physical comedy in the tragic fool Yepikhodov. Missy Malek’s Anya and Kezrena James’s Varya affectingly portray older and younger versions of Chekhov’s female paradox: not escaping (Three Sisters) or doing so (The Cherry Orchard) makes little difference. Alison Halstead exudes fun, for both her and us, as Carlotta, a circus entertainer turned governess.

But the brilliant presiding spirit of this Windsor reign is McKellen. His Hamlet has been filmed for release, as this companion show should be. Able at this point to do small amounts of movie work for vast amounts of money, he has spent recent years touring a solo show to raise millions for theatre charities and then demonstrating his continuing bodily and vocal mastery of classical theatre. We are lucky to have him, and should hope that The Cherry Orchard is not his (to borrow another Chekhov title) swansong.