For those of us lucky enough to be regulars at Antonio Conte press conferences, there are generally a few staples to look out for.

“Hmmm, but honestly… but I repeat… you know very well… we have improved in many aspects.” Typically there’ll also be a reference to how no one thought Champions League qualification was possible in November, or the fact that unless the Premier League’s big four mess up then doing so should be impossible for clubs like Tottenham Hotspur.

There was a period as well when every press conference felt like a challenge to the club — back me or there’ll be consequences. And that if Conte was going to be punchy, his anger would be directed at himself and/or his employers rather than anyone external. Take the post-Burnley meltdown in February when he questioned whether he was the right man for the job.

That’s what was so striking about Thursday’s press conference following the 3-0 win over Arsenal. Gone was any veneer of equivocation or the sense that his anger was directed inwards.

Instead, Conte ripped into Arsenal’s manager Mikel Arteta, repeatedly accusing him of “complaining a lot”, while at the same time airing a number of his and Spurs’ grievances: “Don’t forget against Liverpool I said nothing (about) what happened with Fabinho, a lot of time, because if we want to complain we have the possibility every game to speak about the referee, about the decisions, about the postponed game.” He then added a withering put-down to Arteta: “This is the advice if you want to accept the advice. If you don’t, I don’t care.”

And while it was Arteta who had attempted to create a siege mentality in his post-match comments, some Arsenal fans might think his obvious frustrations at the refereeing decisions missed the point. By contrast there is surely barely a single Spurs fan who thinks Conte was anything other than pitch-perfect in what he said on Thursday night.

Conte had been similarly punchy a couple of days earlier when dishing out some home truths to Jurgen Klopp after the Liverpool manager had questioned Tottenham’s tactics in the 1-1 draw at Anfield. “He was a bit frustrated after the game, but at the same time for every coach it is important to learn to be focused on your team, not the opponent,” Conte said. “It means you want to find an excuse or an alibi because your job didn’t work or something was wrong.

“This is a good chance for him, for me and all the coaches to learn that during the game you never speak about your opponents. It’s important to be focused on your team and the situations where you can maybe do better. You speak about your own problems.”

Twice in a week then Conte has dished out lessons on and off the pitch to managers of top-four teams. His tactics at Liverpool helped Spurs effectively end the title battle with that 1-1 draw at Anfield, and it was a race that only had legs because of Spurs’ 3-2 win over Manchester City in February.

It’s starting to feel as though Conte could be becoming the centre of the Premier League universe again, just as he was in his first season at Chelsea when his side crushed the competition with a 93-point haul. When his tactics were so revered that opponents started to routinely copy his three-at-the-back system to try and stop the Chelsea juggernaut. 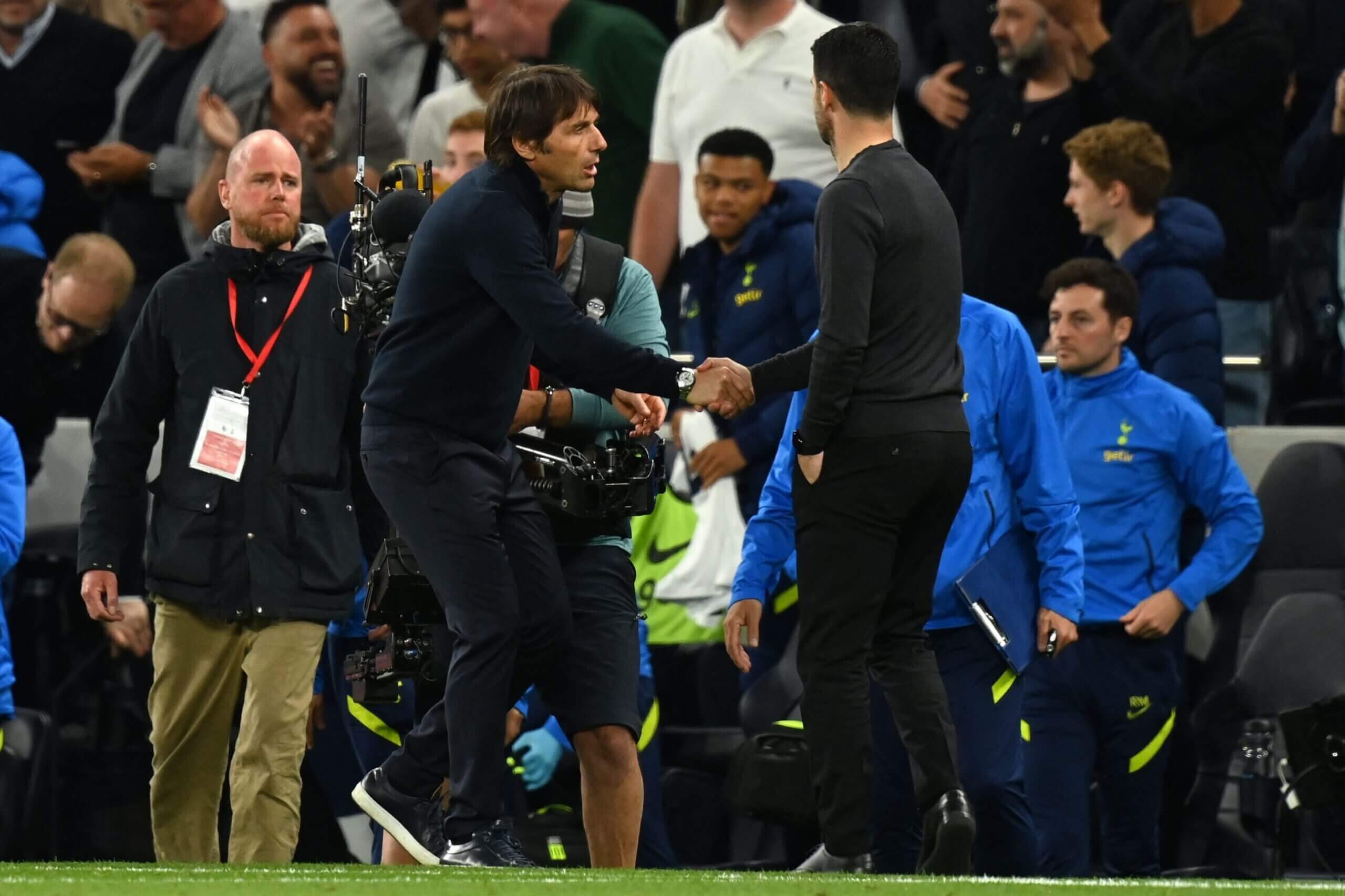 Conte shakes hands with Arteta at full-time – before schooling him in his post-match press conference  (Photo: GLYN KIRK/AFP via Getty Images)

When Jose Mourinho, his predecessor as permanent Chelsea manager and by now at Manchester United, was so triggered by Conte that after angrily confronting his counterpart he reportedly accused the Italian of trying to “humiliate” him during a 4-0 defeat at Stamford Bridge in October 2016. Mourinho’s hostility towards Conte has lingered on, and his ability to get under his rivals’ skins is one of Conte’s many great skills.

Back in February he enjoyed teasing Pep Guardiola following that 3-2 win at the Etihad. After Guardiola had described Spurs’ approach as staying “deep and compact” and “creating a lot of space to run on the counter attack”, Conte posted a video of Spurs’ goals on Instagram with the caption: “Counter-attacks? Maybe not… 😂😂😂”. That’s Guardiola, Klopp and now Arteta all outwitted in the space of a few months (insert your own “yes but Spurs are still fifth” caveat).

Against Arsenal, Conte’s whole demeanour felt so different from the occasions earlier in the season when he has looked like a broken man. This was the chest-out, don’t-mess-with-me Conte that supporters adore. The kind of attitude that made him such a snarling, uber-competitive midfielder during his playing days.

Inevitably, with Burnley up next, the discussion turned to Sunday’s match against Mike Jackson’s side, and the contrast with Conte’s mood after that dismal 1-0 defeat at Turf Moor. “I read that it only took two months for Tottenham to make Conte crazy!” he said of his outburst three months ago. “The manager has to address the situation. At the time, I thought it was right to go strong to try to change the situation.”

Conte has also spoken of a “good connection” with his players, and it feels like it’s growing stronger with every passing week — not just between Conte and the squad, but with him and the club in general. A few regular Conte watchers have detected him using the language of “we” and “my club” in the last couple of weeks — in contrast to the schism he often hinted at between his own and the rest of the club’s ambitions.

“I like to go totally into the club where I work,” Conte said of this connection. “One hundred per cent and more. I know that only in this way I’m able to give everything. And also, to find the way to receive everything from my players, my club and the fans.”

Ultimately, that connection is primarily forged by results, but what managers say makes a difference. And Conte’s digging out of the manager of Tottenham’s biggest rivals pressed the right buttons on Thursday night. So too did voicing his lingering frustration with the original north London derby being called off — something that for months has wound up everyone connected with the club.

Arsenal and Arteta had been schooled, and Conte felt every inch the man you want fighting your corner.

The Guardian view on the Conservatives: a party without a project