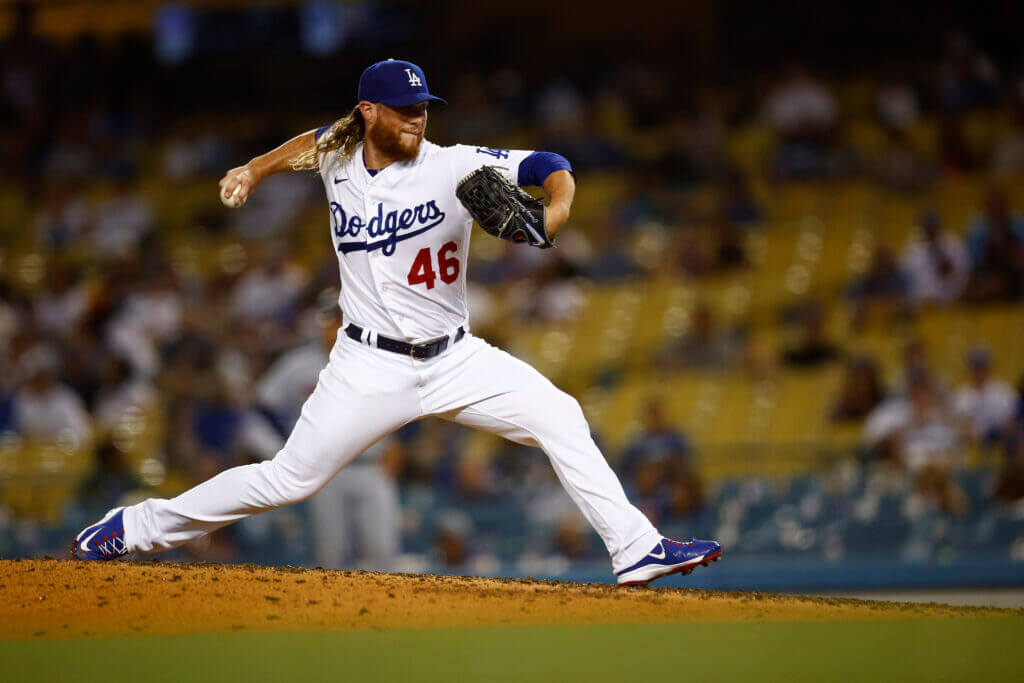 MILWAUKEE — The Dodgers have already seen enough from a former MVP to opt for a reset. Now, they’re grappling with the fact that their 300-career-save closer might be the weak link in their bullpen and a major question mark for October as they already struggle to cobble together enough arms.

They plugged one potential Hall of Fame closer in for another this spring, allowing Kenley Jansen to walk in free agency and using financial maneuvering to add Craig Kimbrel to their roster and get rid of a year of AJ Pollock’s salary. The results, at least from their new closer, have been a season-long test of how much an otherwise historically elite club can sustain having a leaky ninth inning.

The Dodgers are sticking with Kimbrel in the closer role for now. But how long can it last once that expansive division lead is reset come Oct. 11?

The running themes have been alarming. His 4.57 ERA would be his highest over a full season in his career. He’s worked a clean inning in just eight of his 44 appearances this season. Of the 20 saves he has been able to complete, none have come as Kimbrel inherited just a one-run lead.

“With his track record, he’s earned the right to get a longer look,” manager Dave Roberts said, a day after Kimbrel blew his fourth save of the season on Victor Caratini’s bases-loaded 11th-inning single. “Absolutely, I have no problem with that. But as we get into September, the best pitchers are gonna pitch. That’s just the way it has to be and I think that’s the only right way you manage it.”

So the Dodgers have stuck with their 34-year-old closer, whose fastball has lost half a tick and gotten crushed and whose command has evaded him all year long.

First, his breaking ball command was off. His fastball command was spotty. The directional state of his mechanics fell out of whack. But even as he’s worked through each of the holes that have popped up, the results haven’t allowed him to come up for air.

“This whole year, really, I’ve felt like I’ve been battling,” Kimbrel said Tuesday night. “Not necessarily the other team, but myself.”

He’s picked at what has been a common thread — traffic on the bases, namely a rash of base hits.

“Hits,” Kimbrel said. “I have walked some guys, but not tremendously bad. I’ve been giving up hits. You give up a couple soft ones and a hard one hurts you. Tonight the leadoff bunt, a walk and a blooper to lose it. It’s frustrating. It’s tremendously frustrating.”

Kimbrel is allowing hits at a higher rate than at any other stage of his career and allowing a higher volume (46) than in all but one full-season total. And while he’s still striking batters out at an extreme rate, it’s a stark dropoff from the outlier marks he’d posted during the dominant stretches he’d had earlier in his career. Pair that with one of the worst batting averages on balls in play of any pitcher who’s logged at least 40 innings this year, with still plenty of hard contact mixed in, and it’s created warning signs every time he’s entered a game. Even the underlying numbers that suggest Kimbrel’s been unlucky, to an extent, demonstrate he’s been a lesser version of himself.

“I don’t know. Recently I’ve felt like I’ve made some strides in the right direction. The fastball has been jumping, my breaking ball was actually pretty good tonight, I just haven’t been able to put it all together. Not to say I won’t, because I definitely will. It’s coming. But I just think in the last 40-something innings, it’s been very frustrating. It’s time for me to turn it around, and I’m going to. Just come in every day, taking the ball and going out there and eventually it’s going to turn.”

Kimbrel pointed to the luck that has varied against him with hitters putting more balls in play. He’s missing bats at a lower rate than ever before, dropping from the best whiff rate in the sport, according to Statcast, to simply very good. And while some of the characteristics of his stuff remain the same as in years past, it hasn’t translated into enough whiffs to eradicate the wonkiness that follows.

“Getting some swing-and-miss, that’s what I have to do,” Kimbrel said. “If I’m getting beat by soft contact, how do you fix it? Getting them to swing and miss. I just have to do that more.”

His manager has seen a contrasting picture. Roberts said he felt Kimbrel was attempting to be too fine, particularly early in counts, hunting for swing-and-miss and strikeouts and, in turn, falling into bad counts with poor command and results that followed. His pitch counts have jumped up as a result, too.

Managing Kimbrel’s struggles in the fashion the Dodgers have is a luxury. Kimbrel’s production has plummeted far lower than even Jansen’s downswings in 2019 and 2020 that had cut down the Dodgers’ group of trusted options in a postseason series. The sheer number of leverage relievers on Los Angeles’ injured list right now only makes Kimbrel figuring it out more important. Brusdar Graterol could be back as soon as this weekend. Blake Treinen has progressed to reaching a rehab assignment but topped out at 96 mph in his outing Tuesday. Others, such as Tommy Kahnle and Victor González, haven’t even really progressed that far.

Should those numbers continue to thin, the more the Dodgers enter a danger zone — one that’s more impactful in a costly playoff series than in a significantly less meaningful game in mid-August.

“Once you get to a certain point on the schedule, the best players should play,” Roberts said. “I’m a big believer in the players make the lineup, and the players determine who pitches. So that goes to performance.

“(But) October is not upon us right now. If we have a one-run lead tonight, he’s pitching. So that’s kind of where I’m at right now.”