The Guardians are 17-4 in their last 21 games. They’re 7-1 on their tour of the United States, a trip that began in the Rocky Mountains, continued to Hollywood and is wrapping up a short ride from the Mall of America.

They’re outscoring opponents 35-13 in the ninth inning, and 10-4 in extra innings. The “Guardiac Kids,” as I’ve seen a few readers dub them, have mounted 15 come-from-behind victories. In high-leverage situations, they own a .795 OPS as a team, 22 percent better than the league average.

They have completely reshaped the tenor of their season, expedited the club’s contention timeline and revamped the conversation about the trade deadline. Let’s dive into some of the elements that have fueled the team’s surge in the standings, in this edition of Meisel’s Musings.

1. Remember when the bullpen was a pressing concern for Cleveland? Aside from Bryan Shaw, Emmanuel Clase, a rookie in 2021, is the most seasoned reliever on the roster. And yet, before the Anthony Castro debacle Wednesday, the Guardians boasted the second-best bullpen ERA (2.86) in the majors, behind only the Astros. Now they’re at 2.96, which ranks third, behind the Astros and Yankees.

That 2.96 mark would be the third-lowest ERA by Cleveland relievers in the last 45 years. Only the 2017 bullpen (2.89 ERA), which featured Cody Allen, Andrew Miller and Shaw, and the 2005 group (2.80) — when Bob Wickman, Bob Howry, Rafael Betancourt, Arthur Rhodes and David Riske were a driving force behind the club’s 93-win campaign — sit ahead of the current outfit.

Who would have predicted that, even at this juncture of the season? The emergence of Enyel De Los Santos, Sam Hentges, Trevor Stephan and Eli Morgan has equipped the coaching staff with plenty of intriguing, capable options, and that’s before James Karinchak rejoins the mix and Nick Mikolajchak or other minor-league options enter the conversation. Even Anthony Gose, the converted outfielder who as recently as two years ago was working odd jobs — including planting plastic flamingos in peoples’ front yards in the middle of the night — has thrived recently. He threw two scoreless innings in relief of Triston McKenzie on Wednesday and has limited opponents to a .368 OPS over his last eight appearances.

The Guardians should still at least explore the reliever market at the trade deadline — this unit will be challenged over the next few weeks, from a workload and opponent standpoint — but they have built a solid foundation. 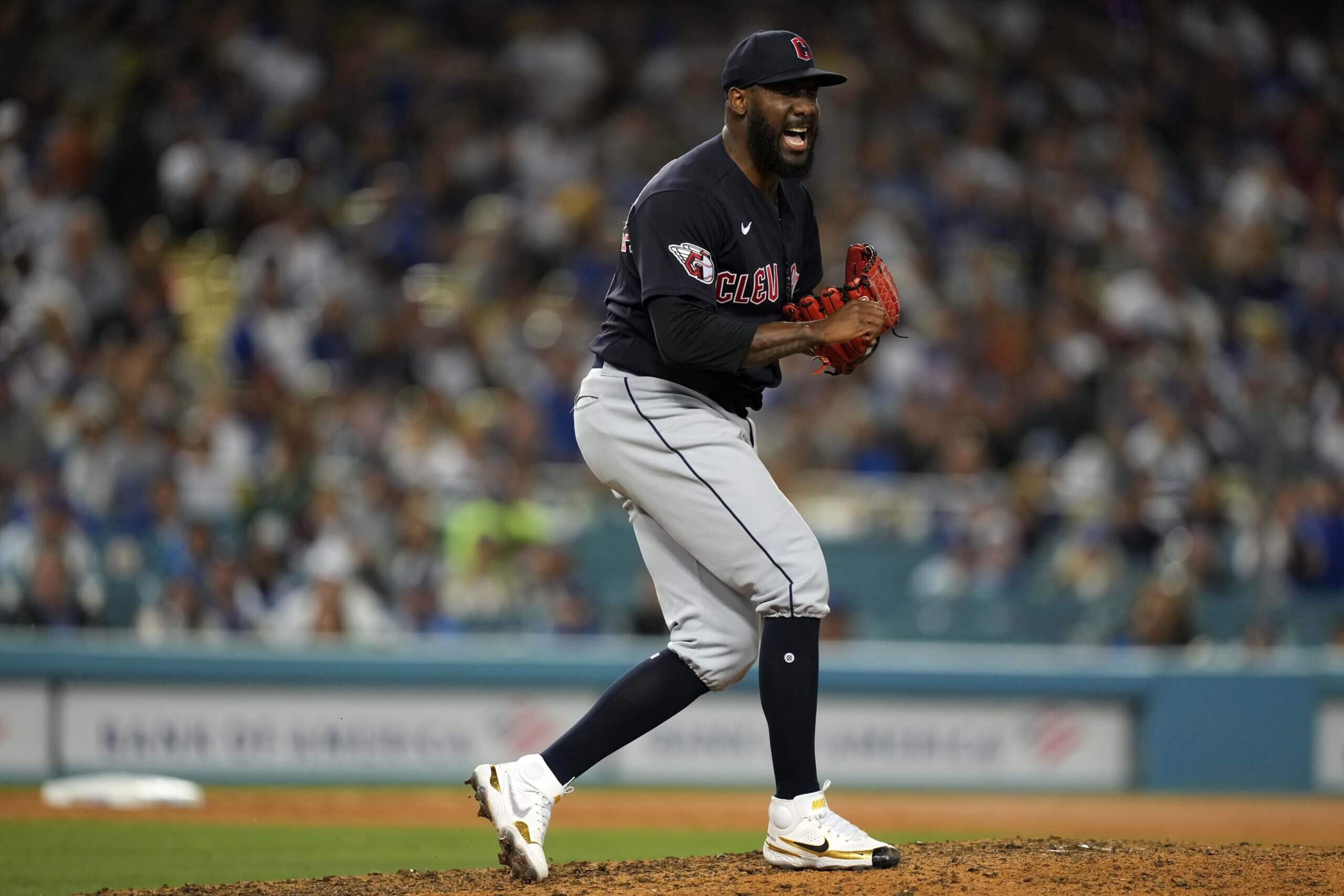 2. De Los Santos was the club’s splashy offseason addition. No, really. He was. It was a punchline all winter, but team president Chris Antonetti and general manager Mike Chernoff can unleash an evil-toned bout of laughter, because De Los Santos, signed to a minor-league deal last December, has been a savior in the bullpen.

He has routinely cleaned up messes in serving as a bridge to Morgan and Clase, and owns a 2.75 ERA and a 2.31 FIP with a healthy strikeout rate. He has gained about 1 mph on his fastball velocity, too, as it has averaged 95.7 mph this season.

The 26-year-old struck out plenty of hitters last year with the Phillies and Pirates, but he permitted flocks of base runners. Now, he’s another notch on Cleveland’s reliever resurrection belt, a leading candidate to join the fraternity of rejuvenated castoffs that includes Dan Otero, Jeff Manship and Scott Atchison. De Los Santos ranks in the 97th percentile in the league in strikeout rate.

His slider has given hitters fits, too. They own a .158 average against the pitch and have whiffed on 39 percent of their attempts to hit it.

De Los Santos began his career with the Mariners. They dealt him to the Padres for veteran reliever Joaquín Benoit in 2015. The Padres traded him to the Phillies for infielder Freddy Galvis in 2017. The Pirates claimed him off waivers from the Phillies last September. The Guardians scooped him up and invited him to spring training just before the lockout commenced. Maybe he’s finally found a home.

3. And then there’s Clase. He leads the league with 32 appearances, 17 saves and the advanced metric “ability to not have his fan base ready to chug a handle of whiskey every time he pitches the ninth.” When was the last time Clase entered a close game and your heart rate soared or your palms got sweaty? He’s been automatic.

We could cite all of his ridiculous velocity-based numbers, but perhaps this is his most impressive statistic this season: He has issued only four walks. He thrives at limiting hard contact because his 100 mph cutter tails away from right-handed hitters and spins uncomfortably toward lefties, and because his slider averages 92 mph. So, when he can locate both pitches, as he has this season, it’s nearly impossible for opponents to piece together anything worthwhile.

4. Hitting coach Chris Valaika, to The Athletic recently, on rookie right fielder Oscar Gonzalez: “His at-bats have gotten better the deeper in the game, especially off back-end bullpen guys. You see him grind out those at-bats, take his hits the other way. I’ve been really pleased with where he’s at.”

Lo and behold, Gonzalez delivered twice in the late innings Wednesday to spur the Guardians to a wild 11-10 win. He launched a go-ahead two-run homer to left in the seventh inning off Twins reliever Jharel Cotton, who entered the game with a 1.76 ERA. In the ninth, Gonzalez knotted the score at 10 with a two-run single off Griffin Jax, who must be tired of the Guardians after three consecutive rough outings against them this season.

Gonzalez ultimately grounded into a double play in the 10th inning Tuesday night, but he fouled off six consecutive pitches from Twins closer Jhoan Duran that ranged from 85 to 100 mph before succumbing on the ninth offering of the duel. On May 29, Gonzalez forced Tigers closer Gregory Soto to throw nine pitches, all ranging from 97 to 101 mph, in a ninth-inning encounter. That was his 12th career plate appearance.

It’s difficult to gauge where Gonzalez’s career is headed. He built a reputation in the minors for hitting for power, racking up strikeouts and rarely drawing walks. In the majors, he’s slugged two home runs in 24 games, both in his last 13 plate appearances. Instead, he’s excelled at smacking sharp grounders and line drives through the infield — not what you’d expect for a 6-foot-4, 240-pound kid who led the farm system in homers in 2021.

“He does have bat-to-ball skills, but there was some swing-and-miss, some chase (in the minors),” Valaika said. “Since he’s been up here, I think he’s handled his at-bats exceptionally well. He’s controlled the strike zone. You’ll see some aggressiveness early, but the way he can lock in (during) his at-bats and finish his at-bats has been really impressive.”

As long as Gonzalez keeps hitting, he could delay Nolan Jones’ big-league arrival and force the front office to look next month at another area of the diamond to upgrade.

5. Pop quiz: Which pitch has Shane Bieber thrown more than any other this season?

A. His fastball, which lacks the sizzle it used to carry
B. His curveball, which continues to stifle hitters
C. His slider, which has induced the highest whiff percentage of any of his offerings
D. His sales pitch, to upper management, for a long-term contract extension

The answer is C, his slider. He’s thrown the pitch 41 percent of the time, a bit more than his suddenly pedestrian fastball. Bieber’s drop in velocity has been well-documented, but he’s found a way to remain effective even with diminished zip.

Take a look at Bieber’s annual output, aside from the pandemic-shortened 2020 season, when he morphed into an unconquerable cyborg en route to a unanimous Cy Young Award.

Really, his 2020 was the anomaly, statistics-wise. And to this point, his 2022 numbers are just as strong, if not stronger, than any other full non-2020 season.

Now, this doesn’t mean we should ignore the velocity plunge or the swing-and-miss decrease. Those trends are justifiably concerning, especially for long-term projections. But perhaps a 12-start sample under unique circumstances two years ago raised expectations to unfair heights. Bieber is still performing at a high level, even if there are more flyouts and groundouts and fewer strikeouts, and more sliders winding away from right-handed-hitters and fewer 94 mph fastballs dotting the outside corner. He could be an All-Star again this summer, just as he was in 2019 and 2021.

6. Myles Straw needed to be shifted to the bottom of the lineup. A sub-.300 on-base percentage wasn’t cutting it from the leadoff spot. But it was critical to have a deserving replacement at the top of the order, and Steven Kwan fit that description. Kwan has rebounded after a dreadful May, which followed his scorching-hot April.

Overall, his on-base percentage stands at .365. He leads the league in strikeout rate, just ahead of teammate José Ramírez.

Leigh Whannell In Negotiations To Direct The Green Hornet And Kato