You’ve probably read parts of this piece before.

In March 2021, The Athletic attempted to identify a defensive midfielder who could make good on Ole Gunnar Solskjaer’s desire to create a team that can play quick, high-pressing football. In September 2021, we wrote United’s central midfield partnership between Fred and Scott McTominay needed upgrades and reinforcements in case of injury.

Three months ago, we looked at how Erik ten Hag asked his central midfield players to operate at Ajax compared to the players in the United squad and found a gap in talent that would be best remedied in the transfer window.

In their opening game of the season on Sunday, United lost 2-1 to Brighton — and many of their old frailties in central midfield reappeared.

Fred, 29, endured a difficult time as the deepest midfielder in Ten Hag’s 4-2-3-1 system, often serving as the pressing trigger whenever he received the ball from United’s centre-backs.

In the 25th minute, McTominay found himself in possession in the final third but took far too many touches to progress an attacking move. On his sixth touch, Moises Caicedo tried to dispossess him, leading to the 25-year-old fouling the Brighton midfielder and receiving a booking. 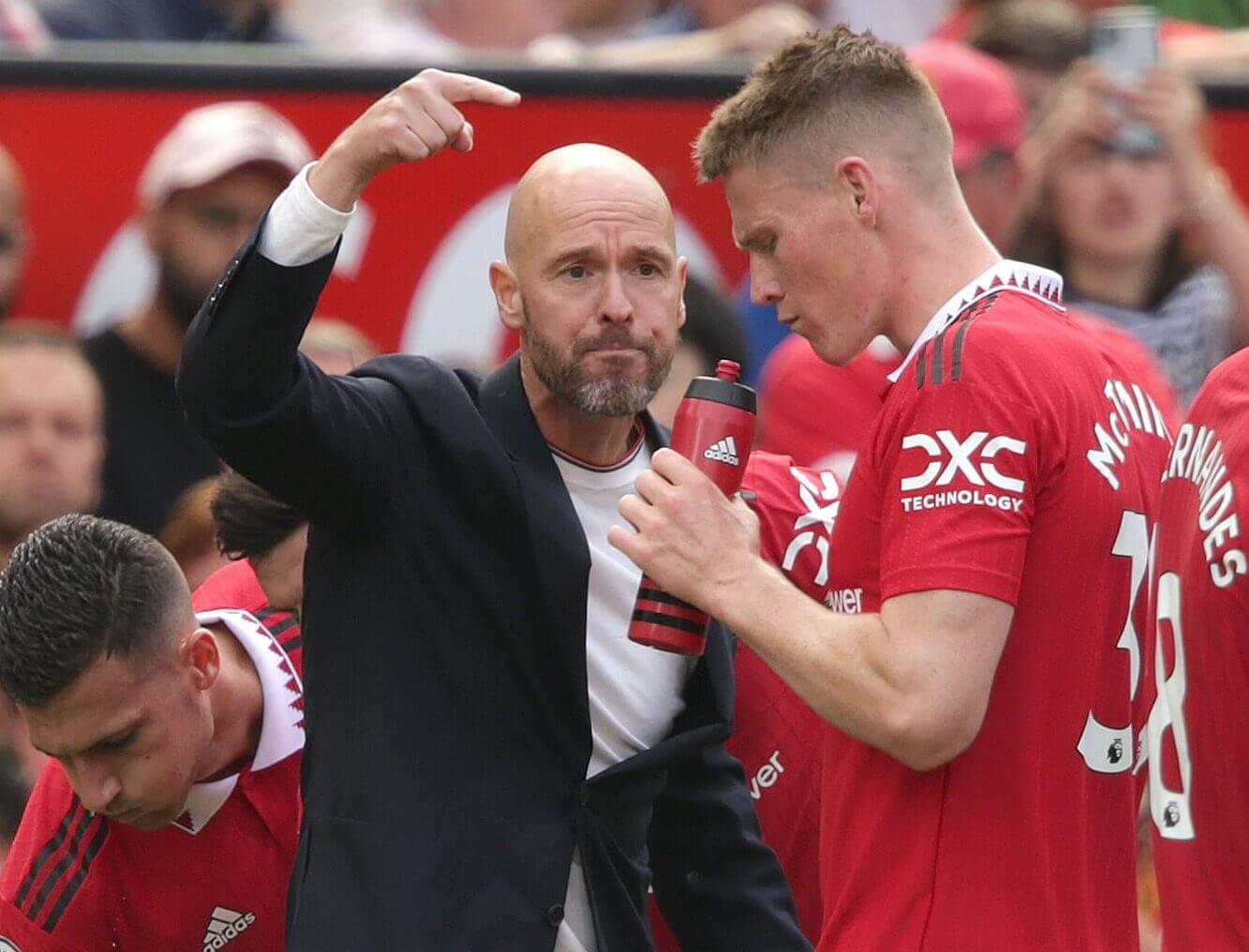 Paul Scholes was scathing in his post-match debrief. “With Fred and McTominay, he (Ten Hag) is going to have to go with just one of them but even one of them is probably too many,” the Manchester United legend told Premier League Productions. “Fred gives the ball away all the time and McTominay’s trying to run with the ball constantly, and then gives it away.”

Then, in an Instagram story post, Scholes minced his words even less, writing: “It’s all about body shape when receiving the ball… too many times facing their own goal and can only play one way. Get on the ‘half turn’ for fuck sake and bring your forward, more talented players into the game.”

It was during the behind-closed-doors games of the 2020-21 season that the “McFred” partnership proved most successful for United. In a condensed football calendar with reduced training time, the application and effort offered by the pair formed a bedrock that Solskjaer built upon.

That season, United looked to exploit pre-existing space on the pitch rather than ask their deepest midfielders to manipulate the opposition and create new attacking opportunities. For that purpose, Fred and McTominay were sufficient — the duo patrolled the space ahead of United’s back four, breaking up opposition play and trying their best to chip in with attacking effort when possible.

It was not ideal and many teams of United’s size would typically look to have one player offer the playing profile of McFred rather than a pairing but it largely worked. Fred and McTominay have more complementary weaknesses than strengths, but the pair ran with a level of stamina and intensity that proved beyond other United players, including an ageing Nemanja Matic and the timid Donny van de Beek.

A season later, the pros of the McFred partnership began to be outweighed by its cons. With more training time between games and opponents making fewer unforced errors, the limited progressive passing of these two midfielders left United unable to properly knit their defence and attack.

Premier League sides, inside and outside the top six, have better No 6-style midfielders than United, and it is unusual for a club of such size and ambition to have been so slow to address its issues in defensive midfield. The purchase of a 29-year-old Matic in August 2017 was the last time United recruited a specialist No 6 and the addition of Fred a year later was the last time United purchased a player who typically plays in a midfield pivot.

That neither Fred nor McTominay serve as the deepest midfielder for either of their respective national teams heightens the oddity of their club partnership. United’s defeat to Brighton was evidence that a central partnership forged in chaotic footballing circumstances is now too chaotic to take United any further. 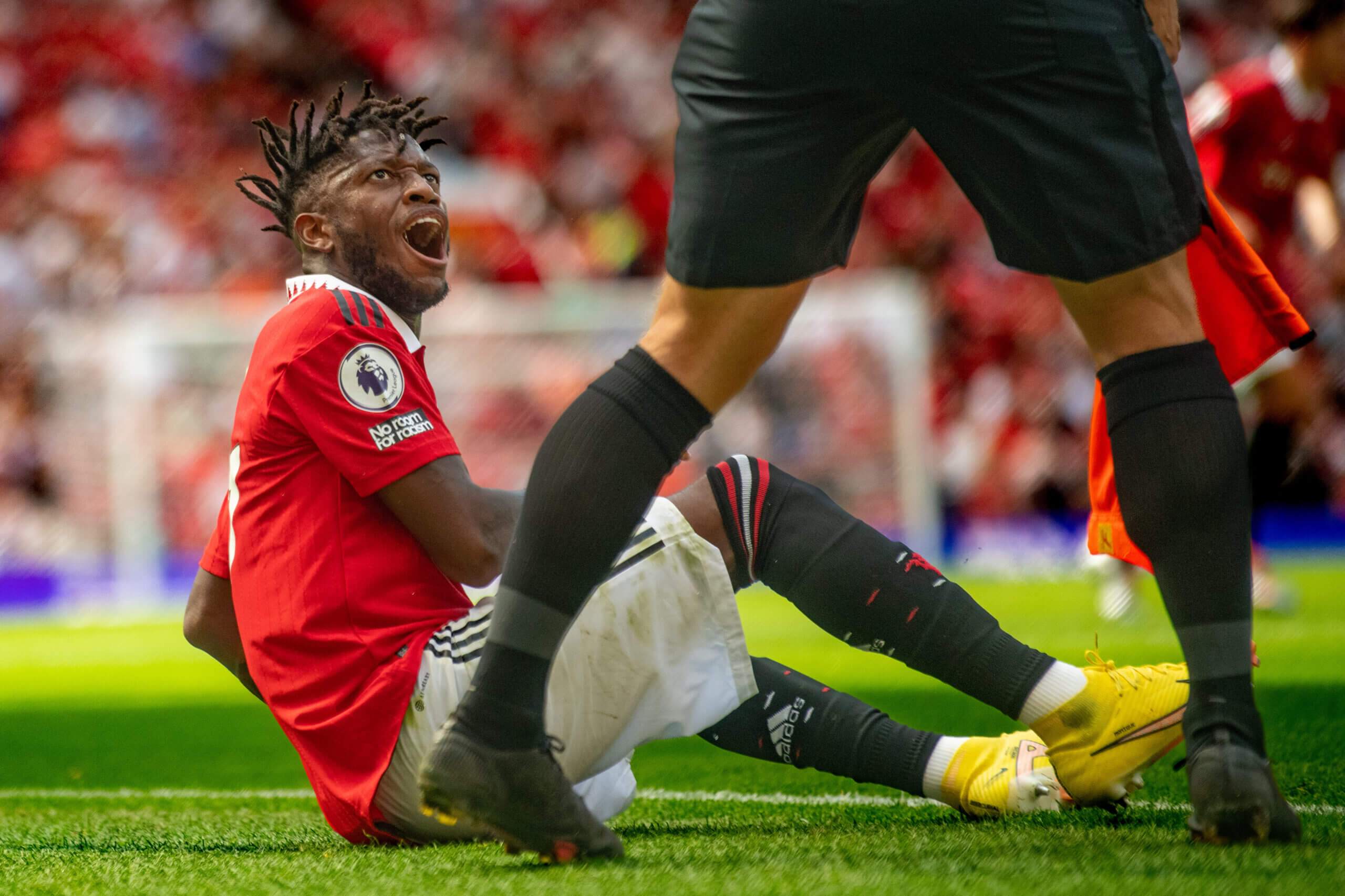 Fred was subbed off early in the second half of United’s 2-1 loss to Brighton (Photo: Ash Donelon/Manchester United via Getty Images)

In recent seasons, United have been fielding two men to do the central-midfield job one man can likely provide. As evidenced by Fred’s displays for Brazil next to Casemiro and McTominay’s displays for Scotland, both individual members of the McFred partnership would be better served if used alongside someone more suited to playing as the deepest midfielder.

The past 14 weeks have seen Ten Hag spearhead a recruitment drive for Frenkie de Jong but, even if the Barcelona man can be convinced to come to Old Trafford, there remains work to be done. The possible addition of Adrien Rabiot adds another body to United’s squad but the Frenchman has a curious, often inconsistent playing profile, and does little to address United’s issues regarding ball progression. It is a startling move to make days after Ten Hag told assembled journalists that “we just don’t need any player — you need the right players” when discussing possible transfer targets.

If Ten Hag wishes to turn United from Champions League qualifying also-rans into consistent top-four force, he will have to consign the McFred partnership to the annals of history.

Both Fred and McTominay can serve a purpose in a squad alongside other midfielders but their time as a consistently chosen duo should end.